It be an exciting day for a Pirate: LEGO.com has launched their official Pirates product page for your pillaging pleasure! 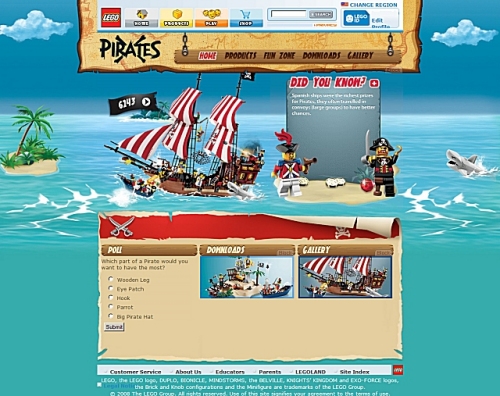 With everything from product profiles to wallpaper and commercials, you’re sure to find some treasure on this voyage! Plus it be a pretty site, loaded with useful information, amusing entertainment, a lovely ocean background and parchment pages. How could anyone not love that?

Head on over now, then return to the forums and let us know what you think of this exciting discovery!

Grand Opening of Classic-Pirates.com: The Blog

This is the new home for all of your Classic System Pirate LEGO news and information on the internet. For those of you who were used to the old Classic-Pirates.com, nothing has really changed except the way we will be able to present information, and what better time then now, as we approach the most exciting era in recent LEGO Pirate memory?

We’ve carried over a few recent news stories from Classic-Pirates.com as a sample of what you will see here, but they are only the beginning. With this new format comes a world of new opportunities, and you’ve got a front row seat for the whole thing.

Discuss the new Classic-Pirates.com frontpage in the forum!

Check back often and be sure to tell your friends!

Posted by ImperialShadows in News & Announcements | Comments Off on Grand Opening of Classic-Pirates.com: The Blog

Chenben’s latest ship, Le Prom©th©, is quite simply a work of art. From the French flag on the stern, right through to the beautiful prow, this ship is packed with splendour – not to mention cannons!

Posted by ImperialShadows in Ships | Comments Off on Le Prom©th©

Mister Phes wants to know…
“Does the LEGO Pirate Forum take too long to load?”

Head over now to vote and provide your opinion!

Posted by ImperialShadows in Polls | Comments Off on Poll: Pirate Forum Loading Time

Prepare to embark on a journey of looting, robbing, smuggling and plundering with the Pillage the Village Contest! Bloodthirsty battles and dastardly deeds rule the roost for the next 10 weeks, so start your MOCs, to compete for the biggest heap o’ booty you’ve ever seen!

Posted by ImperialShadows in News & Announcements, Contests | Comments Off on Pillage the Village!

It’s that time of year again! The day where everyone stops and talks like a pirate! September 19th every year is International Talk Like a Pirate Day, so it’s time to get those pirate-y voices going and scare the neighbours!

Ever thought, “LEGO Digital Designer is great for trains, but for pirates, it’s terrible”? Well now, Cpt. Pegleg Blockbeard has proved you wrong with his new MOC, the Imperial Trading Post Remix – LDD Style. It is a great MOC, utilising clever techniques and ideas into creating an Imperial Trading Post inspired merchant port. You need to see this one properly to fully grasp its complete creativity!

Head over to Eurobricks to take a look at this Classic Set, revisited.

Oh no! It’s the British! Not too long ago, our relatively new member, Daniel G, rolled out a fantastic MOC of a British 30-gun 2-deck frigate named the HMS Active. But wait! There’s more… Daniel has recently modified this ship – for the better! You’ll definitely want to check this one out!

See the original ship then take a look at the new version.

Posted by ImperialShadows in Ships | Comments Off on The HMS Active

4 ships, 95 men, fully armed, and a whole load more, need a good home! Long-standing Eurobricks member SuvieD offers up this haul, containing 14 rare pirate minifigures, barrels (quite literally!) of parts, hard-to-find sails and ship-parts and more epaulettes than you could shake a yard-stick at!

Actinidia Entertainment and Ear-Shock Studios present us with the Fragmentary Map. Spend your well earned hours watching this film which is chock full with comedy, special effects, and lots and lots of swashbuckling pirate action, not to mention a reminder of one of our favourite classic LEGO games of all time, as well as much, much more!

Watch and discuss this exciting brickfilm!

Posted by ImperialShadows in Brickfilms | Comments Off on “The Fragmentary Map”