Pirates Plus Technic by bbqqq 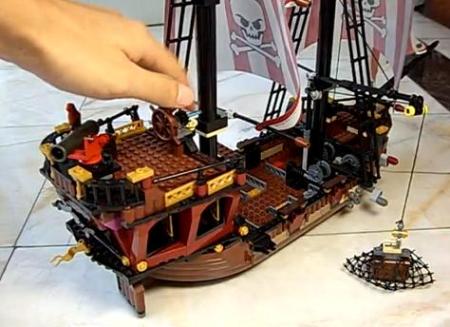 Brickbeard's Bounty with a working rudder and more!

Eurobricks member bbqqq has made some amazing modifications to his Brickbeard’s Bounty and Queen Anne’s Revenge. Using Technic parts he has added a working rudder, a turning cannon, and a crane!  Check out the videos of his new-and-improved ships.

Discuss Pirates Plus Technic in the forum

The Pirate Chronicles by Napoleon53 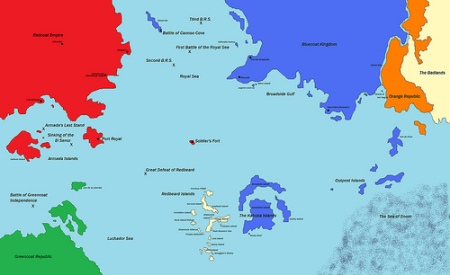 A map of adventure!

Eurobricks member Napoleon53 has undertaken an interesting project: a fan fiction continuation of the official LEGO Pirates storyline!  He’s written six chapters so far and also created a map of all the exciting locations in his story.

Read and discuss The Pirate Chronicles in the forum!

The Thomas Ledoux by lego fox 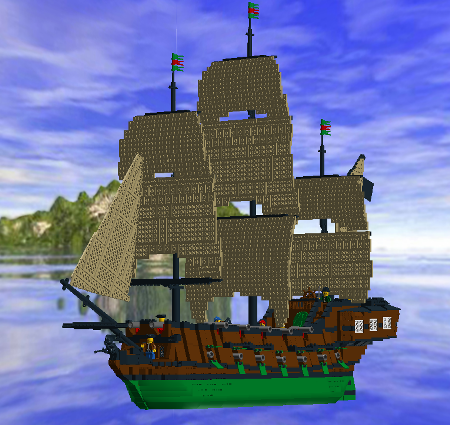 Check out those sails!

Eurobricks member lego fox has posted an excellent Lego Digital Designer ship, the Thomas Ledoux!  With all those cannon, any pirate would think twice about attacking her.  The brick built sails are an especially nice feature.

Discuss the Thomas Ledoux in the forum! 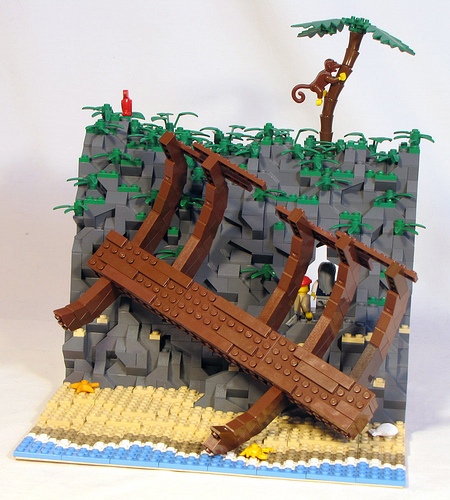 What lies behind that shipwreck?

Eurobricks member shmails brings us an intriguing Pirate scene.  One side has a seemingly-deserted shipwreck…the other has a secret cave where a meeting of the Brethren Court is in progress!  This is especially worth checking out for the excellent (all female!) custom minifigures.  You can see lots of pictures on flickr here.

Discuss Captain LaRose’s Return to the Court by shmails in the forum! 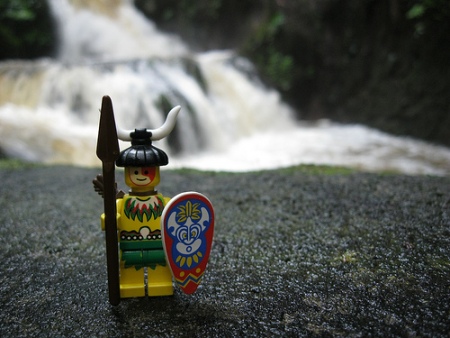 An Islander in his native land

Eurobricks member Inconspicuous took a trip to Hawaii, and while there he spent time taking pictures of some LEGO Pirate minifigures in what he calls their “natural habitat”.  Check out his Flickr Photostream here for more pictures, including a few with collectable minfigures and Indiana Jones! 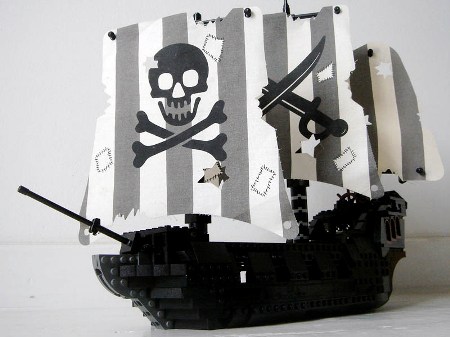 It's nigh uncatchable...and also tiny!

Eurobricks member Sebeus Iniwum gives us a few adorable itty-bitty ships, the most exciting of which is the tiny Black Pearl!  The shape of the ship is captured charmingly in miniature, with clever use of pieces like the Collectible Mini figure stand.  It’s a great little MOC that deserves a close study.

Discuss the Tiny Black Pearl in the forum 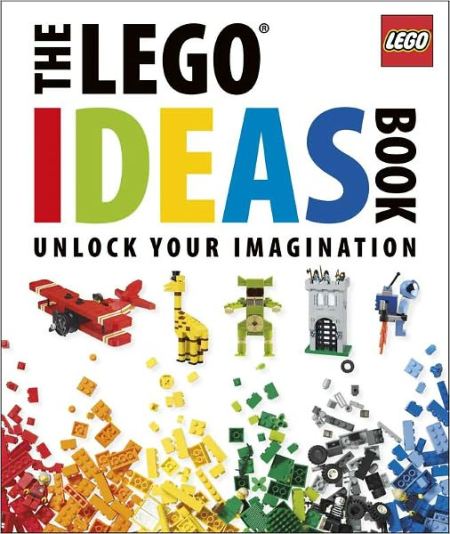 The new LEGO Ideas book...Pirates within!

The new LEGO Ideas Book from DK was released last September, and has a few pages of interest for Pirate fans.  It shows you how to make parrots, cannons, and a treasure chest.  Also pictured are a few pirate ships and even a shipwreck!  You can check out some of the book at the Amazon page.

Discuss the LEGO Ideas Book in the forum 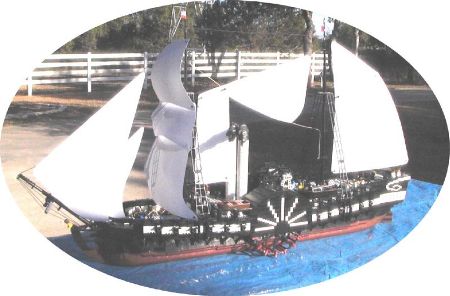 RTS Zavala of the Republic of Texas Navy

Eurobricks member RTN LNA has put together a Navy from an alternate history of Texas.  It was posted here some time ago, but the Navy was on display at Brick Fiesta this year, and we’re bringing it back as a blast from the past!  There are several vessels here, so it’s definitely worth a look.

Discuss the Republic of Texas Navy in the forum

Posted by TalonCard in Soldiers (Blue Coats), Ships | Comments Off on Republic of Texas Navy by RTN LNA A blast from the past!

YouTube member tohomanufacturing has posted an awesome LEGO Pirates commercial from 1990.  It features an epic battle between the Caribbean Clipper and the Black Seas Barracuda!  Check it out for some retro Classic Pirate action.

Discuss this Classic Pirates commercial in the forum. 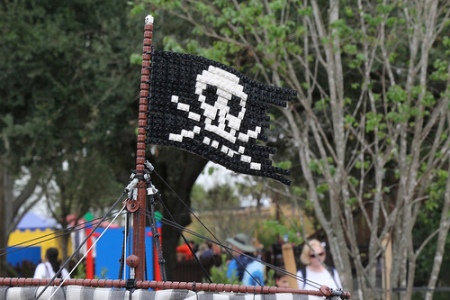 LEGOLANDs are famous for their Minilands, areas where cities and other environments are recreated in LEGO form.  The new LEGOLAND Florida has an entire section dedicated to LEGO Pirates, complete with mini-scale ships, a harbor town, shipworks, and a reappearance by Captain Redbeard!  Insidethemagic has a photostream on flickr with a lot of awesome pictures.  Check it out here.

Posted by TalonCard in Pirates, Soldiers (Blue Coats) | Comments Off on Pirates In LEGOLAND Florida’s Miniland 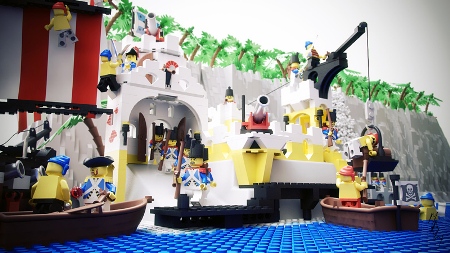 Eurobricks member mali has created an amazing pirate scene featuring several classic Pirate sets, all lovingly rendered using 3ds Max and LeoCAD.  That’s right; each and every brick in this amazing scene is a computer generated image!  Mali’s scene includes the Lagoon Lock-up, the Eldorado Fortress, and several variations on the Caribbean Clipper.  Be sure to check out the excellent fly through animation!

Discuss CGI Pirate Scene by mali in the forum!

Posted by TalonCard in Soldiers (Blue Coats), Dioramas | Comments Off on CGI Pirate Scene by mali 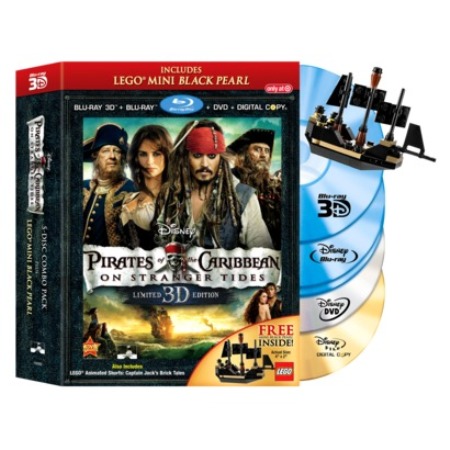 The elusive promotional set 30130 Mini Black Pearl has appeared again, this time on American shores.  It is available from the U.S. retailer Target with the purchase of the Pirates of the Caribbean: On Stranger Tides 3-D Blu-Ray/DVD combo pack.  It includes a 3-D Blu-Ray, a Blu-Ray, a digital copy, and DVD versions of the film.  And, of course, the lovely Pearl in all its miniature LEGO glory.  Price is $29.99, with free shipping for orders $50 and over.

The Mini Black Pearl was previously only available with the purchase of The Sun newspaper in the U.K. last May.

Discuss the Mini Black Pearl set with Blu-Ray in the forum!

Posted by TalonCard in News & Announcements, Sets | Comments Off on Mini Black Pearl Available at Target