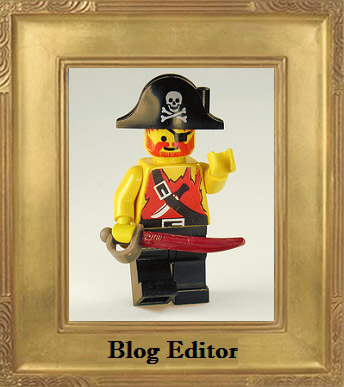 There have been many tales told of the man they call Redblade. Little history of this dashing figure is commonly known, but some facts are certain:

The good Captain was introduced to LEGO at the beginning of the millennium. Early records from that period indicate that his first loves were Bionicle and Orient Expedition, but he knew he was destined for something better.

The young Redblade had a fascination with pirates and the history thereof, filling his shelves with books about pirates and pirate ships and pirate-related fiction. It was some years ago when our hero discovered some scans of old LEGO catalogues on the internet, and it was through these mystical tomes that he first learned of the fabled lost line of LEGO Pirates. So it was that the Captain decided: he would find the LEGO Pirates, or he would die trying.

Armed only with a search engine and a thirst for adventure, he sallied forth into the waters of Bricklink and as far as the shores of eBay to claim his prize, and there it was that he found the first signs of this lost bounty: a 6261 Raft Raiders, used, without instructions or box, but in otherwise good condition. His hopes raised, our hero swiftly purchased and built this set, taking it as a sign that he was on the right track, and pressed on thence to find other wonders: Bluecoats, Islanders, Redcoats…

At last, after a long voyage, the heroic, dashing, and incredibly modest Captain came across a forum called Eurobricks, where he made a shocking discovery: Pirates was coming back.

Upon conquering the 2009 line, the Captain hung up his adventuring britches and settled into a peaceful life on Eurobricks. ‘Twas a life where he could dine on tasty food, drink strong rum, offer his worldly wisdom to those who sought it out, and generally enjoy himself, and it is there that he remains to this day.

When the Captain is not online, he enjoys reading, writing, and referring to himself in the third person.