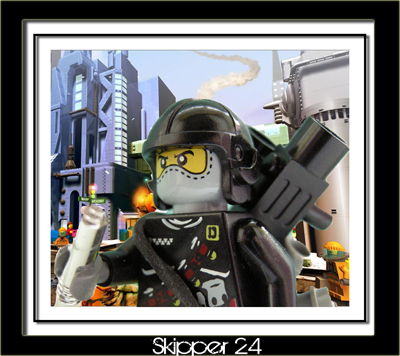 Born in Singapore who then later moved to Wales for a brief period and finally to England where he is currently living now. He often browsed the forums looking for leaked set pictures resulting in signing up in August 2007. However his first post wasn’t made until April 2008 leaving a large time of more lurking.

Skipper’s second post was in the Pirate forum in the form of an entry into the ‘It’s a Pirates life competition’. From then on Skipper has been enduced within a world of LEGO and Pirates. Although he helps out within the Pirate forum his real passion is for Star Wars where he is a frequent poster in the forums. Skipper first joined the Classic-Pirates team when he found an advertisement on the old site, the link allowed him to email Mr. Phes. After being asked a few questions he got signed up into the crew. Skipper 24 at his current Editor position fulfils his duty by writing frontpage posts for Classic-Pirates.com.

Skipper is not so much of a MOCer but enjoys building small models and vignettes in his free time. Another more recent LEGO related hobby he has taken up is taking pictures of Minifigures in the outdoors. He has a fair sized Star Wars collection consisting of relatively old sets but many of the newer ones show up in there too. He also has a variety of other themed sets including Pirates, Town and Batman. In his free time apart form building with LEGO, Skipper enjoys painting Lord of the Rings miniatures & model planes, messing about in Photoshop, listening to music and not to mention playing a good video game or two.

Full of enthusiasm, Skipper 24 is one of our earliest veterans. Signing up mid 2008, he has been working hard for a long time and shows no sign of slowing. Skipper 24 is a valuable Crew member who we miss greatly when he isn’t here.