The Story of Zorro

Since Dieter De Vos was a child he loved LEGO, especially the LEGO Pirates theme.   This love would later prove instrumental in the progression of the world’s biggest LEGO Pirates AFOL fansite, Classic-Pirates.com.

After lurking for more than half a year, Zorro finally decided to join the LEGO Pirates Forum hosted by Eurobricks.  He discovered the forum and Classic-Pirates.com while searching Google for Napoleonic armies made entirely out of LEGO, and was excited to discover Bonaparte’s (Tom Jacobs) amazing French and British armies.

You can only imagine the look on his face when he realised the very man whose army led him to Classic-Pirates.com practically lived next door to his home in Belgium! After all, with Eurobricks being such a large international forum, what were the odds?

Within moments of joining he fell in love with Eurobricks, favouring the LEGO Pirates forum, the History and Adventure forum and the Reviewers Academy.  He immediately set about taking part in discussions and contributed nearly every day! Less than two weeks later he asked permission to enter the Reviewers Academy and  produced his first review (6271 Imperial Flagship), which demonstrated his love for writing…

The Pillage the Village Contest was one of the many initiatives that boost his desire to even more active within the forums. He took part in the Creative Critic and Small MOC divisions, the former of which he won first place.

It was a little more than a logical step for Zorro to become more actively involved with Classic-Pirates.com. After a friendly invitation of former Admiral Mister Phes, founder of both the Eurobricks LEGO Pirates forum and Classic-Pirates.com, Zorro joined the crew as a Blog Editor.

After learning much in the Reviewers Academy, Zorro completed his academic studies on the first day of 2009 and became an Academy teacher!

Zorro also continued to display a phenomenal dedication to the Classic-Pirates.com blog and became one of its most promising recruits.  So promising Mister Phes realised Zorro had great potential and began training him to not only manage the blog but the LEGO Pirates forum as well.

Throughout his tenure as Admiral, Zorro made phenomenal contributions to Classic-Pirates.com and Eurobricks.  Involving himself with many tasks, ranging from fundraising for contests to training new recruits to write blog articles.  He was also strongly involved in the social aspect of the forum and attended the Eurobricks Event in Gunzburg in 2009.

January, 2011: We have lost our Admiral Zorro

Our beloved Admiral passed away in January of 2011. His short life touched many people from all over the world.   He was a great friend and will be remembered as an exemplary member of both Eurobricks and Classic-Pirates.com.

Here is a short list of some of Zorro’s contributions to the LEGO Pirates Forum and Classic-Pirates.com

The masked man made several reviews of Pirate and Castle sets and filled quite a few gaps in the review index.

Zorro didn’t post that many MOCs in his time here and these are his only creations we could find:

Fire at Will, Down with the Republic!!

You have been sentenced to death by Immurement

Zorro was also a big force when it came to organizing contests and events. He would spend hours and hours each week making eBay threads throughout the forums to raise enough money to have contests like the ones listed below.

Pillage the Village II: The calm after the storm

Zorro’s presence will be greatly missed throughout the forums. We know he’s sailing somewhere better now. 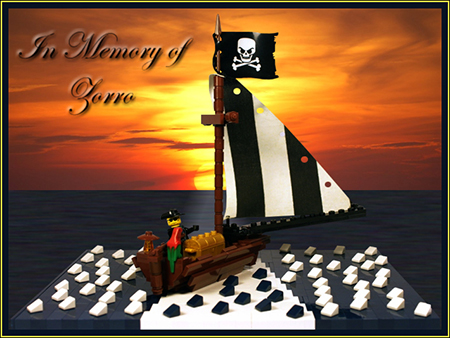