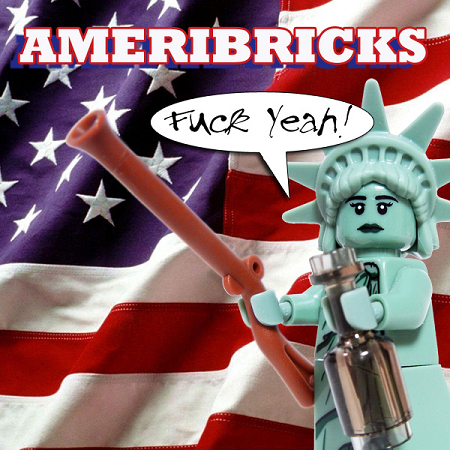 When you visit the Pirate MOCs forum, or any other Eurobricks forum, you’ll notice a little difference. The Pirates banner is gone, and replaced by an American banner. The Eurobricks staff has noticed that the vast majority of our members are Americans and therefore it’s more appropriate to change the name of this website to Ameribricks.com. The exact consequences for the Pirates forum are still unknown to me, but reportedly there will be a number of small changes in the upcoming weeks.

Read all about it here  and visit the new forum.

Posted by Admiral Croissant in News & Announcements | Comments Off on Ameribricks.com 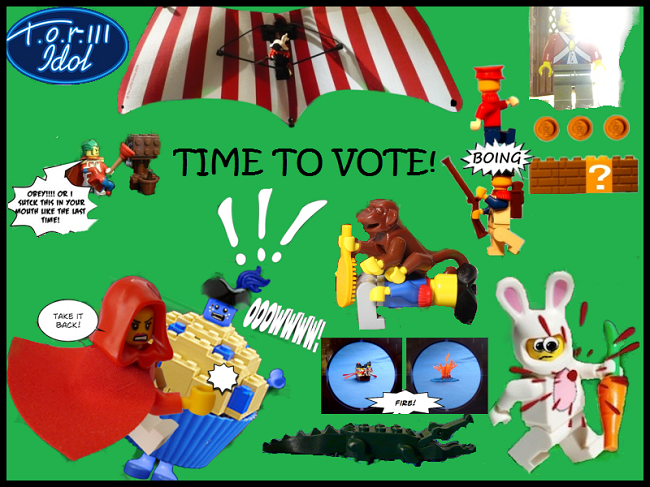 The Third Tournament of Retribution has almost come to an end. For almost 4 months, the Pirate MOCs Forum has been flooded with the most humiliating, painful and hilarious LEGO comics we’ve seen in a long time. A total of 11 finalists have made their way to the third round, and now it’s time for you to vote for your favourites!

Read the comics and cast your vote in the Pirate MOCs Forum.

Vote now for the Third Tournament of Retribution! 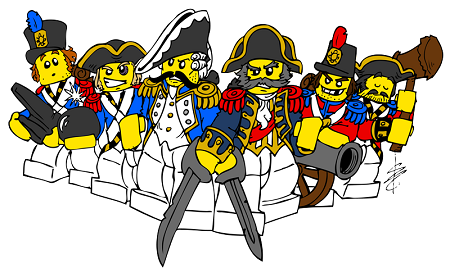 Who will compete in the final epic battle?

The first two rounds of the Third Tournament of Retribution have been closed, so now it’s time to vote! Choose your favourite Redcoat and Bluecoat comics and distribute 5 points for each faction. The best five comics of each side will compete in the final round, when things will get rough!

Take a look at the entries, then vote for the best Bluecoats and Redcoats. 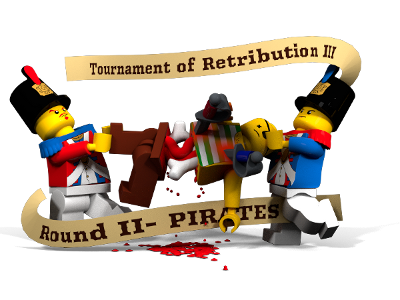 The first round of the Tournament of Retribution III was a success with many great entries related to the theme Islanders. Now it’s time for the second round which will be open until the 2nd of february. So stay tuned to see more hilarious comics and cruel molestation. The theme of this round is Pirates!

Read what this Tournament of Retribution is all about and keep an eye on the Pirates Forum. 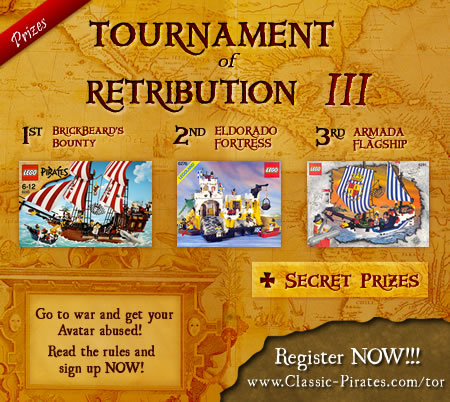 Once you have treasure, it’s quite hard to give it away. So we took quite a long time to decide on the prize pool. But we are quite generous if I may say so. You can see three large sets here, but there are also many small sets to win, for active participation in making comments, making the most funny or humiliating comic and such. So if you haven’t signed up yet, please do so!

Sail to the Pirates forum, read the rules and sign up for the third Tournament of Retribution! 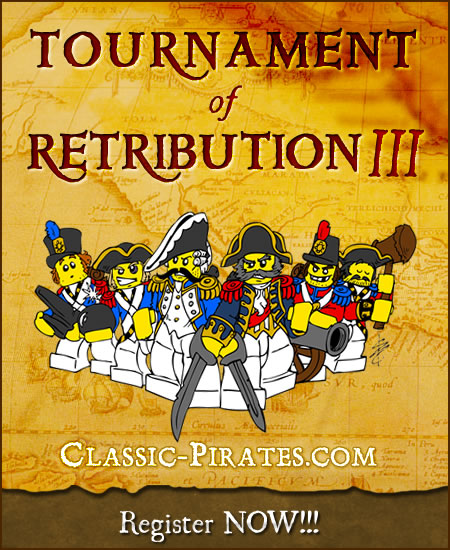 Are you salty enough?

Yes that’s right! Game’s on! The most epic duel between Redcoats and Bluecoats continues in yet another Tournament of Retribution! The previous two tournaments have been a great succes, so we decided to start a new one. And there’s a fantastic prize pool for you to win even if you’re not a great builder. This is also a good opportunity for new members to get involved into the pirates community. Reason enough to load your rifle and sign up!

Read the rules, sign up, and authorize your avatar! 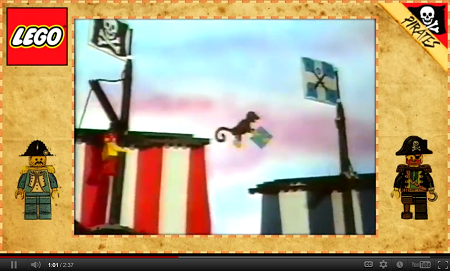 Oh no! Spinoza jumps aboard the Seahawk... with the map!

Eurobricks member moschino shares with us one of the first LEGO Pirates commercials. Made in a time when computer animated video’s didn’t exist, this stop-motion film is nevertheless great fun to look at. It’s an exciting adventure about the epic battle between Pirates and Bluecoats, fighting over a treasure map. Not to mention the nostalgic value to most of us!

Check out this official LEGOLAND Pirates Stop Motion Video from 1989 in the forum! 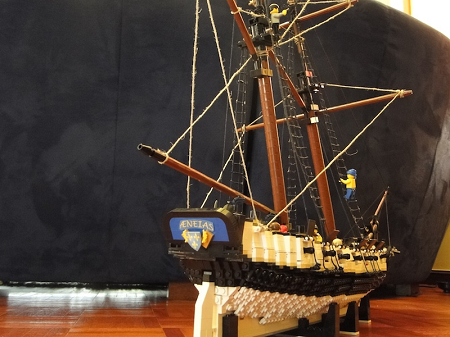 Even small ships can have a beautiful stern.

When it comes to shape, this ship is almost as perfect as a wooden ship model can be. Based on the plans of the French ship La Recouvrance, this gaff rigged schooner is built for a maximum of speed. Eurobricks member Frank Brick Wright clearly did a good job on this vessel, and it’s getting even better! Sails will be added and there’s even been some talk about a test cruise.

Check out Aeneias by Frank Brick Wright in the forum! 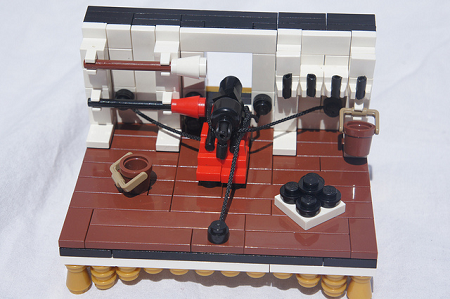 Notice the clever use of black hoses?

This may be a small MOC, but upon closer inspection it’s a very clever and detailed piece of work. Eurobricks member Mr. Townsend did a marvellous job on this powerful short-range cannon. This weapon caused even more deadly splinters on enemy ships, hence it’s nickname the smasher. A great addition to many a LEGO ship! Sponge, wormer, bucket and cannonballs, it’s all there!

Discuss Carronade by Mr. Townsend in the forum.

Posted by Admiral Croissant in Cannons | Comments Off on Carronade by Mr. Townsend 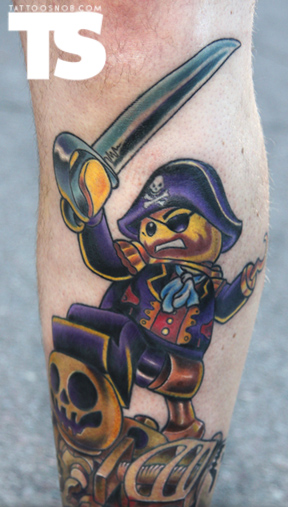 Whilst pirates usually carry mermaid or anchor tattoos on their arm, some Lego pirate fans choose a pirate tattoo on their turn. There’s not much left of the fact that Lego was designed to be a kid’s toy. Lego tatoos is an AFOL thing for sure, and they exist of many more themes!

Check out Lego Pirate Tattoo in the forum!

Posted by Admiral Croissant in Uncategorized | Comments Off on Lego Pirate Tattoo!

Bad Surprise For Pirates… by Legacek 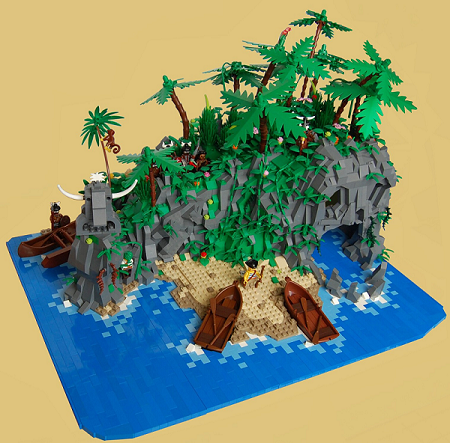 "Well Jack, this seems like a safe place to go ashore"

Coming back from a raid, these pirates find themselves on an island where the natives don’t look very friendly. An easy night by the campfire probably won’t happen. The story is funny, and the MOC is nice as well, with an interesting cave, a large statue and more.

Visit Bad Surprise For Pirates… by Legacek in the forum! 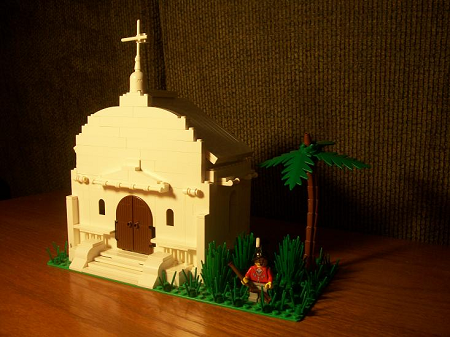 Typical tall windows, large doors, holy water and a statue of Saint Joseph are some of the things you’ll find in this Spanish Catholic mission from the 16th century. Eurobricks member Hiawatha did a nice job on this MOC, and the lighting looks good as well, representing sunset in Florida.

Check out Spanish Mission by Hiawatha in the forum.