The Classic-Pirates.com Staff wishes you a very creative and happy 2013!

We are very proud of our members and the community, so a big thank you for you for making 2012 a year to remember! Let’s make the upcoming year even more spectacular! Now off to the pubs with you scallywags! See you next year and watch yourself! 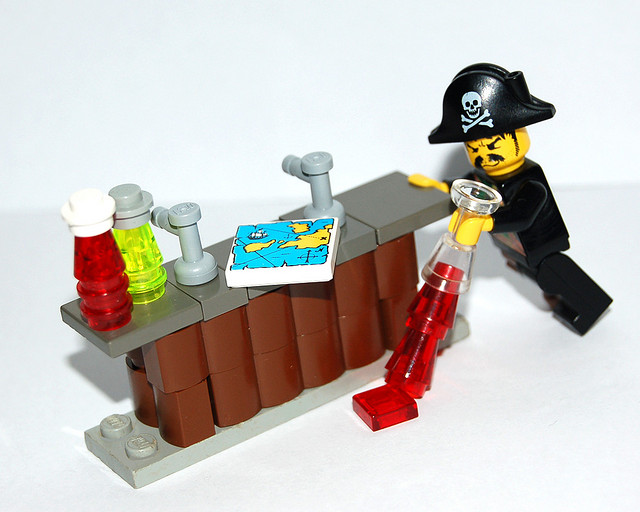 Picture and vignette is made by Craig ‘Lego’ Lyons.

Posted by Captain Blackmoor in News & Announcements | Comments Off on A Happy New Year! 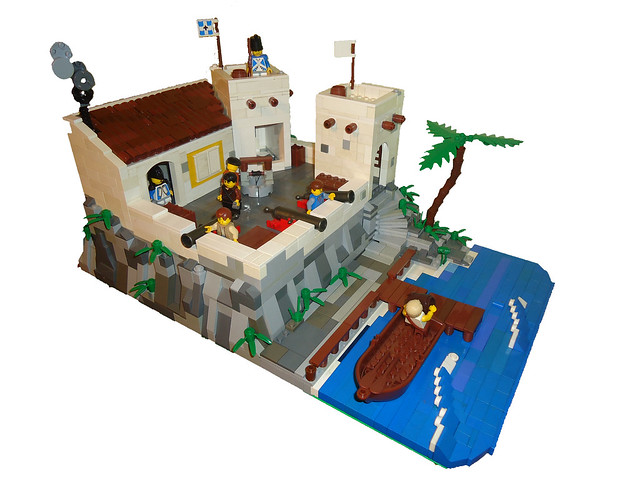 A peaceful fortress in the Caribbean

Eurobricks member Darth Yogi surprised the Pirate forum a while ago by posting this fantastic fortress, Le Sans Fin! It features a gold safe under the rocks, and the buildings have an interior, and on top of that it’s a decent fort which could withstand a siege at ease.

Time for you to discuss Le Sans Fin by Darth Yogi in the forum!

Posted by Captain Blackmoor in Soldiers (Blue Coats), Land Based | Comments Off on Le Sans Fin by Darth Yogi 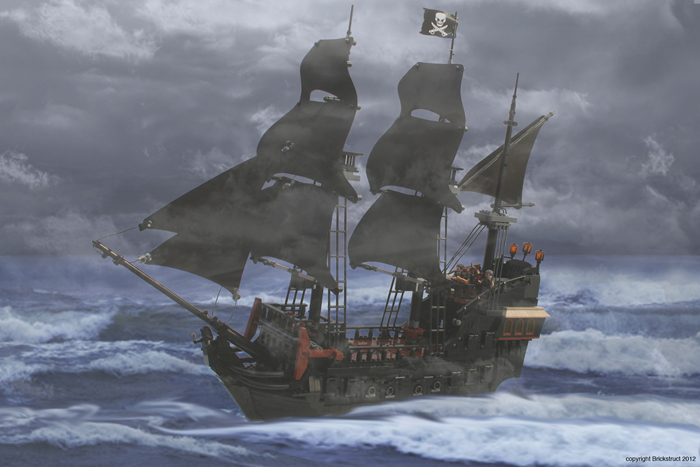 The Black Pearl roaming the seas!

Eurobricks member kevblee has finished his custom Black Pearl, the fast and creepy flagship of Captain Jack Sparrow in the Pirates of the Caribbean series! By using some advanced techniques this ship is one of the best replicas of the Black Pearl!

Time for you to discuss the Custom Black Pearl by kevblee in the forum!

Eurobricks member matt22hew has finished his beautiful vessel, the HMS Gauntlet! One of the very few completed Man-O-Wars on the forum! The building process can be seen in this topic where you see this ship growing into a monster.

Discuss the HMS Gauntlet by matt22hew in the forum right away!

Posted by Captain Blackmoor in Soldiers (Blue Coats), Ships | Comments Off on HMS Gauntlet by Matt22hew 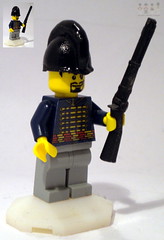 One of the many realistic Napoleonic soldiers!

Eurobricks member Woody64 has recently shared his update with 3D Printed Custom accessoires for minifigures!  Especially the custom headgear is worth looking at. The wide selection of  weapons will surely come in handy for customizers, in addition with the custom torso’s.

Hurry to the forum to check out Woody64’s 3D Printed Minifig Customs!

Pirates of the Caribbean: On Stranger Tides, official trailer! The official trailer has been released!

Eurobricks member Andre1989nl shares the official trailer for the upcoming movie “Pirates of the Caribbean: On Stranger Tides” with us. A very promising movie to look forward to! Mermaids, zombies, Blackbeard and many more dangers on the road to the “Fountain of Youth”!

Pirates of the Caribbean: On Stranger Tides: captures the fun, adventure and humor that ignited the hit franchise – this time in Disney Digital 3D™. In this action-packed tale of truth, betrayal, youth and demise, Captain Jack Sparrow crosses paths with a woman from his past (Penelope Cruz), and he’s not sure if it’s love-or if she’s a ruthless con artist who’s using him to find the fabled Fountain of Youth.
When she forces him aboard the Queen Anne’s Revenge, the ship of the formidable pirate Blackbeard (Ian McShane), Jack finds himself on an unexpected adventure in which he doesn’t know who to fear more: Blackbeard or the woman from his past.

See the Pirates of the Caribbean: On Stranger Tides, official trailer for yourself in the forum!

And see the Pirates of the Caribbean: On Stranger Tides, official trailer on YouTube!

Posted by Captain Blackmoor in Upcoming Minifigs, News & Announcements, Discussions | Comments Off on Pirates of the Caribbean: On Stranger Tides, official trailer! 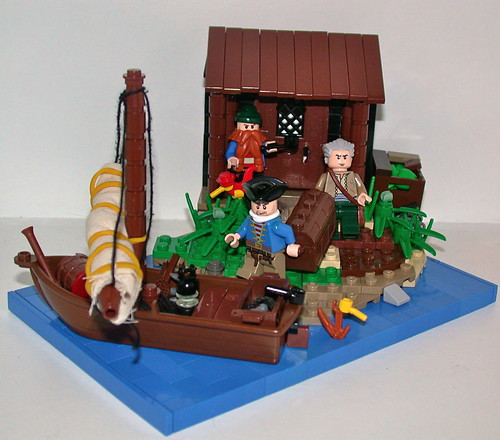 The smugglers of Jamaica!

Pif500 posted a remarkable creation on our boards! Smugglers on Jamaica haul their cargo into the small sailing vessel. The whole scene is well built and there are plenty of details.

See the Smugglers by pif500 on the forum!

Posted by Captain Blackmoor in Vignettes, Miscellaneous Build | Comments Off on Smugglers by pif500 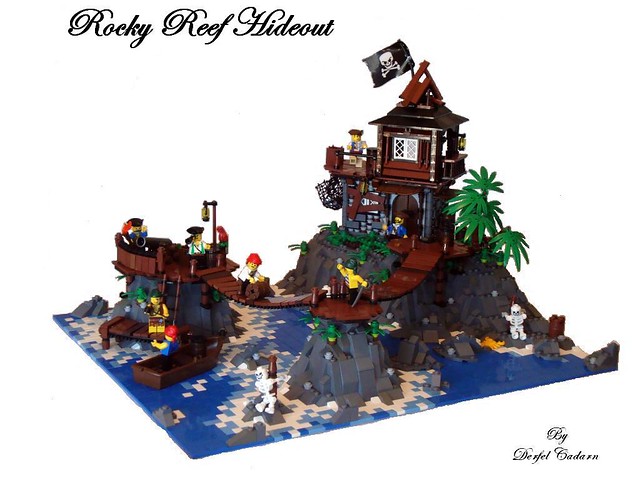 The place for a pirate to hide, stash the treasure and get drunk!

Our MOC-Expert Derfel Cardarn presents us his latest work. He decided to present this MOC because it was some time ago since his last Pirate MOC, and we are glad he did! Filled with great detail, landscaping work and architecture. Take a look at the bridges for example!

Off you go to see the Rocky Reef Hideout by Derfel Cardarn in the forum! After 1,5 years of building, the 20 gun frigate Vesta has finally been completed! The hard work of Admiral Croissant has defenitely paid off. With a great playable rigging, this vessel is truely special. The ship has several nice aspects on board, the ship is modular, that grants the Vesta an interior and playability! A strong crew, some fierce guns and a fast vessel makes this ship a must for every fleet.

See the Vesta by Admiral Croissant for yourself in the forum!

Check out the new Brickforge items!

Hound Knight presents us the latest Brickforge items, including very useful utensils for a pirates’ life! The Cutlass is great for swashbuckling while the Hatchet can be used for chopping wood or fending off local savages. The Bayonet clips onto the BrickForge Musket or any other accessory designed with a standard 3.1mm section; such as the Battle Rifle or Coilgun, making for a truly painful experience.

Discuss the new Brickforge items in the forum! 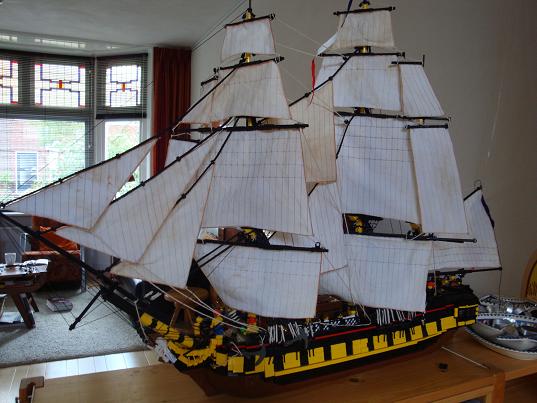 Our very own Admiral Croissant has published a stunning update about his French frigate Vesta. The hull has almost been completed, but the rigging is absolutely phenomenal! Highly detailed and amazing customizing work has resulted in one of the best rigged ships so far.

Curious? See the Vesta by Admiral Croissant for yourself in the forum! 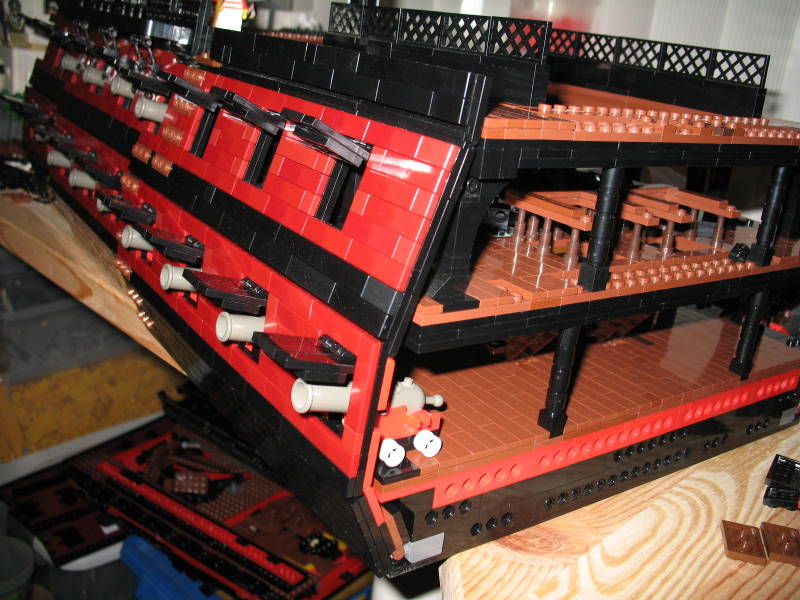 A brand new midsection for the Phantom!

Eurobricks member Zcerberus is still working on his astonishing ship, the Phantom! In his hot update we see the new midsection of the ship, highly detailed and some great colours!  The interior looks like you are wandering in a real ship, and don’t forget to check out the brickbuilt masts…

See the Phantom by Zcerberus for yourself in the forum!