Tournament of Retribution Entry by Capt.JohnPaul!

Tournament of Retribution participant, Capt.JohnPaul harasses one of Eurobricks most famous Redcoats…..Joey Lock! In this comic Joey is taunted into battle, has his ship sunk and some of his crew drowned. How will Joey respond to all of these anti-Redcoat actions?

Discuss this ToR II entry in the MOC forum!

The Attack at La Haye Sainte by Kerntechniker!

Eurobricks member Kerntechniker has posted his Bayonets at Dawn entry, The Attack at La Haye Saint. In this battle General Michel Nay ordered his cavalry to attack one of the infamous British squares led by General Wellington resulting in the loss of many French soldiers.

Discuss The Attack at La Haye Sainte by Kerntechniker in the Moc forum!

Posted by Ratshot in Bayonets at Dawn, Land Based | Comments Off on The Attack at La Haye Sainte by Kerntechniker!

The Battle of Spotsylvania by Mrcool1804! The American Civil War rages and many men die. Brother fights brother and fathers fight their sons. Eurobricks member Mrcool1804 presents us with his version of The Battle of Spotsyvania. The Yankee soldiers advance through the water while under fire from the entrenched Confederates. Who will prevail in this historic American battle?

Discuss The Battle of Spotsylvania by Mrcool1804 in the MOC forum.

Posted by Ratshot in Bayonets at Dawn, Land Based | Comments Off on The Battle of Spotsylvania by Mrcool1804!

Hoist the Colors by NewRight! 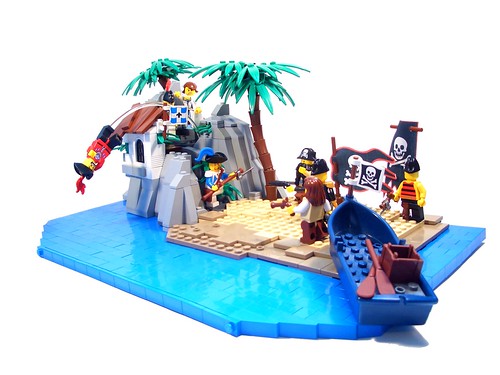 The Governor takes one of his Ambassadors on a walk while pirates arrive on Imperial owned sands.

Discuss Hoist the Colors by NewRight in the Moc forum!

Posted by Ratshot in Weapons & Accessories, Pirate Minfigs, Soldiers (Blue Coats) Minifigs | Comments Off on Hoist the Colors by NewRight!

The Second Battle of Trenton by Admiral Ron

Admiral Ron presents us with his Bayonets at Dawn entry, The  Second Battle of Trenton also known as The Battle of Assunpink Creek. The American Revolutionists stand firm as the British Redcoats advance across the bridge.  Who will emerge victorious?

Discuss The Second Battle of Trenton by Admiral Ron in the MOC forum.

Posted by Ratshot in Soldiers (Blue Coats), Contests, MOCs, Other | Comments Off on The Second Battle of Trenton by Admiral Ron 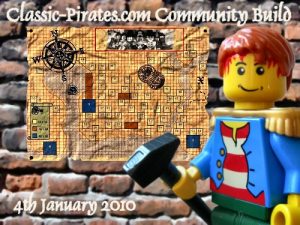 He will receive a Cannon Battle for his entry.

So head on over to the winners thread and congratulate him!

Posted by Ratshot in Contests | Comments Off on 2010 Community Build Winner….

Voting for the 2010 Community has ended.

A big thank you goes out to all the participants for there awesome entries. You guys had some pretty amazing MOC’s!

I would also like to thank  the following members for helping me out in some very important ways! Commodore Hornbricker, Captain Blackmoor, Captain Zuloo, Erdbeeries, SlyOwl and Zorro.

PS  The winner will be announced shortly.

Hello, I would like to take this time to remind you that there is only 1 week left untill the 2010 Community Build ends so if you want a chance at winning that beautifull Cannon Battle you better get your entry in fast!

If you have any questions feel free to PM me or consult the Questions and Answers Topic.

Thank You and Good Luck,

Posted by Ratshot in Contests | Comments Off on 2010 community Build Reminder.

Are you unable to cook? Maybe you’re poor and not able to afford a decent meal, so why not head over to the Commons and pick up a cheap bowl of grub? They’ll even cook it for you!

P.S. Bring your own bowl or the management might get ugly.

Eurobricks and Classic-Pirates.com member Pellaeon presents us with his Community Build entry, the Commons, a place for poor people to buy cheap meals when there experiencing hard times.

Discuss Soup’s on! … at the Commons by Pellaeon in the MOC forum!

Posted by Ratshot in Contests, Land Based | Comments Off on Soup’s On! … at the Commons by Pellaeon! 2010 EB Community Build!

A prize is to be awarded for 1st place in the 2010 Community Build!

Classic Pirates is pleased to announce that there will be a prize awarded for the 2010 Community Build….6239 Cannon Battle!

Discuss the prize in the 2010 Community Build Topic!

Breaking news! The LEGO® Company has announced….nothing. But Kris Kelvin has! He brings us his own custom set, The Palace of Austerlitz. 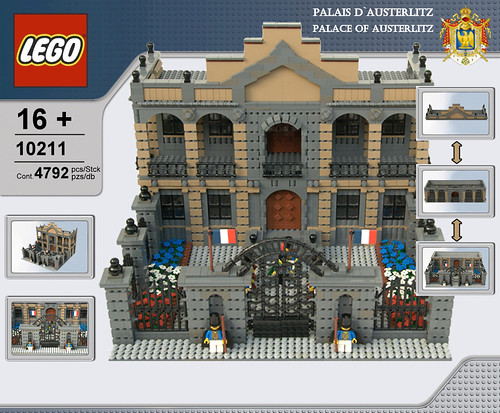 So head on over to the MOC forum and discuss

The Palace of Austerlitz/ Palais d`Austerlitz by Kris Kelvin!

Posted by Ratshot in MOCs, Other, Land Based | Comments Off on Palace of Austerlitz/ Palais d`Austerlitz by Kris Kelvin 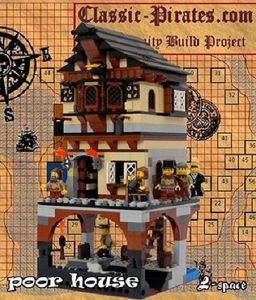 EB member L-space brings us his 2010 Community Build entry, A poor house/charity building were people in need of cloths, food, water and tax relief can find refuge from the pressures of the world.

L-space certainly included lots of unique little details such as a basement entrance, a gang of poor people and a nifty looking chimney.

Discuss The Poor House by L-space in the MOC forum!

Posted by Ratshot in Other, Miscellaneous Build | Comments Off on Community Build 2010: The Poor House by L-space