The Cannonball by Matthias130182 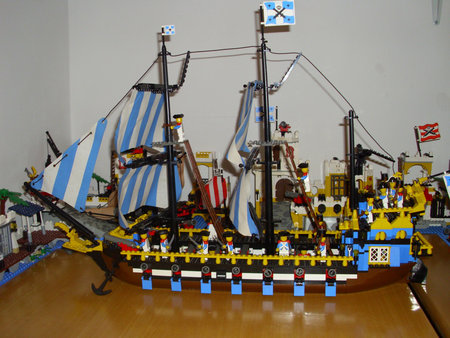 The Caribbean Clipper’s all grown up.

Inspired by the Lego Pirates audio dramas, eurobricks member Matthias130182 brings us his interpretation of Governor Broadside’s flagship, the Cannonball! Taking some cues from the classic Caribbean Clipper, this beauty comes well-equipped with 16 guns and a full crew. Pirates beware!

Head over to the forum to see more pictures and comment on The Cannonball.

Posted by Capt. Redblade in MOCs, Ships | Comments Off on The Cannonball by Matthias130182 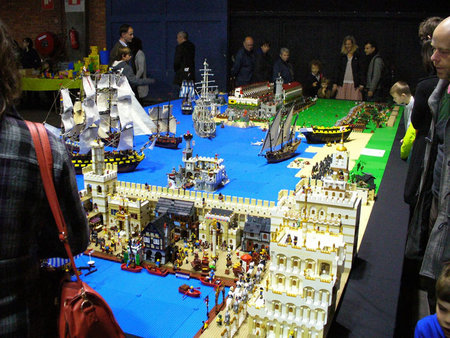 Several of Eurobricks’ own, including Bonaparte and Sebeus I, collaborated on this massive display for Brick Mania Antwerpen. With 12 ships, 4 forts, 2 islands, and somewhere in the neighbourhood of 1000 minifigs, this might just be the largest Pirates display we’ve ever seen!

Stop by the forum to see more photos and comment on Brick Mania Antwerpen – Pirate Layout.

Posted by Capt. Redblade in Dioramas, MOCs | Comments Off on Brick Mania Antwerpen – Pirate Layout by Sebeus I et al. 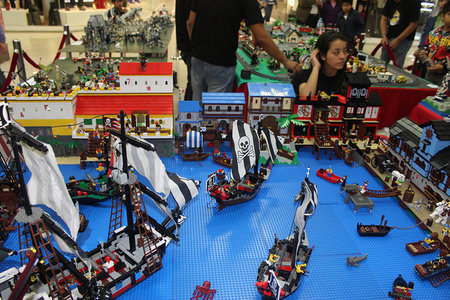 Eurobricks newcomer El_Pirotecnico has made a memorable first impression with this diorama, which he built for an expo in his native Peru. Featuring a mix of MOCs and official sets, old and new, the result is a very busy scene with tons of hidden details.

See the slideshow and comment on Port Callao Invasion in the forum!

Posted by Capt. Redblade in Dioramas, MOCs | Comments Off on Port Callao Invasion by El_Pirotecnico 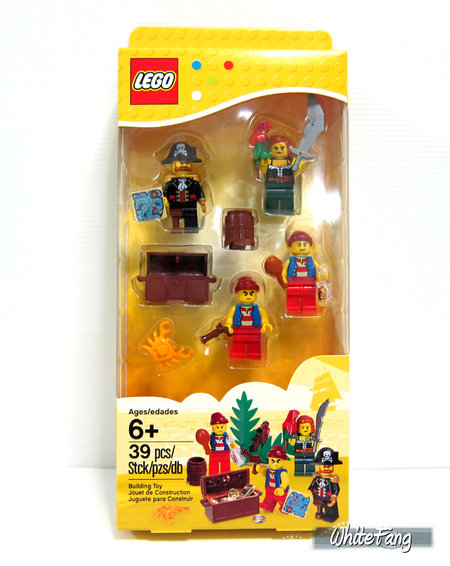 Money for old rope, or a sign of things to come?

This new Pirates minifigure pack proves that there’s still some life in the body, but is it worth it? Our own WhiteFang has taken it upon himself to answer that question in his review of 850839 Pirate Minifigure Pack. Is TLG just clearing out its stock of spare parts, or are there yet further plans for the theme? You decide!

Read the review and discuss 850839 Pirate Minifigure Pack in the forum.

Beware the Tikis! by sweetsha 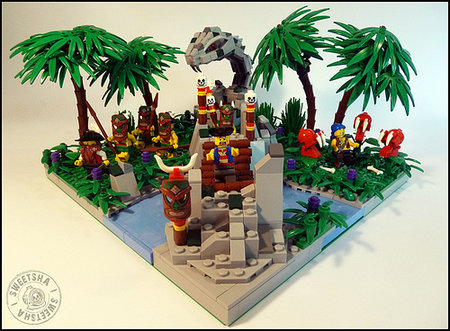 An island paradise? Not likely.

Eurobricks member sweetsha built this amusing island scene to show off his CMF Tiki Warriors, but that doesn’t mean we can’t enjoy it! Of particular note are the snake statue and the adorably carnivorous man-eating plants. These bumbling pirates are definitely in over their heads!

Discuss Beware the Tikis! in the forum.

Posted by Capt. Redblade in Pirates, Dioramas, Islanders, MOCs, Land Based | Comments Off on Beware the Tikis! by sweetsha

Ship of the Line Persephone by Dread Pirate Wesley 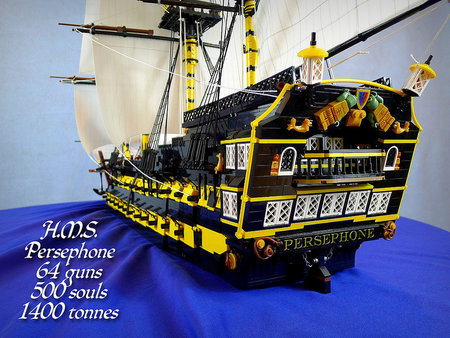 A labour of love

Over two years of research, design, and construction have finally paid off for Eurobricks’ own Dread Pirate Wesley, who presents us with his truly stunning 64-gun ship-of-the-line, the HMS Persephone! Composed of some 4000 bricks and 14 custom sails, this magnificent labour of love was definitely worth the effort!

See more pics and comment on Ship of the Line Persephone in the forum!

Posted by Capt. Redblade in MOCs, Ships | Comments Off on Ship of the Line Persephone by Dread Pirate Wesley 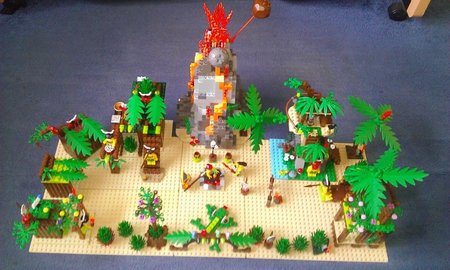 An island paradise (save for the exploding mountain)

Eurobricks member absolutelylez has put together a very classic-looking Islanders scene with this diorama. Taking centre stage is the stunning volcano, erupting just as the natives prepare to feast on a hapless pirate. Hopefully they don’t get ash in their pirate stew!

See more pics and comment on Volcano, Islander Island in the forum!

Posted by Capt. Redblade in Islanders, MOCs, Land Based | Comments Off on Volcano, Islander Island by absolutelylez 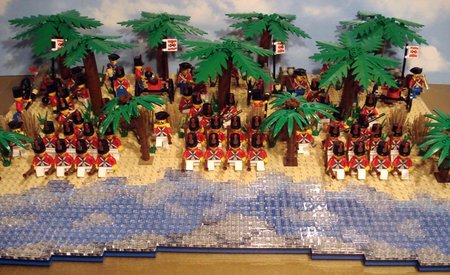 No pirates will drop anchor here!

Our own ACPin has done it again! This diorama beautifully shows off his Redcoat army in formation, defending a tropical beach against some unseen invaders. Well-armed with cannons and muskets aplenty, these guys aren’t giving up this beach anytime soon!

See more pics and comment on Red Coat Beach Defense in the forum.

QAR Prototype I by Yawgmoth 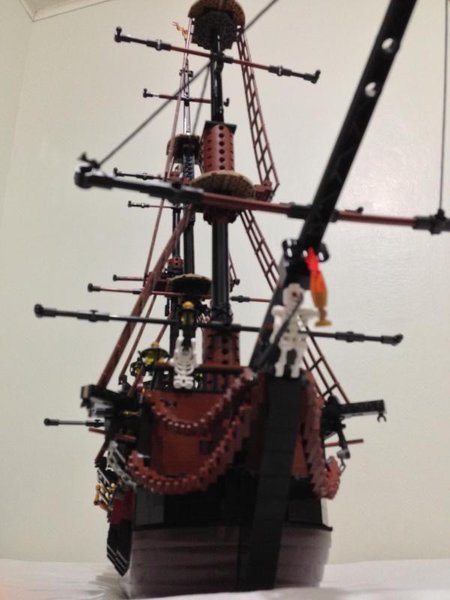 Eurobricks user Yawgmoth has rebuilt the Queen Anne’s Revenge for our viewing pleasure. Though not complete, this beast of a ship is a more movie-accurate model than we’ve seen so far. With some work, the QAR might finally be a ship worthy of Blackbeard himself.

See more pics and comment on QAR Prototype I in the forum!

Posted by Capt. Redblade in MOCs, Ships | Comments Off on QAR Prototype I by Yawgmoth

A Redcoat battalion, ready for action!

Eurobricks member ACPin is back in fine form with this vignette showcasing Redcoat soldiers in formation. Using cheese slopes to affect a kneeling position for some of his troops makes them look that much more prepared, and the new horse in its reared-up position just seems made for scenes like this!

See more pictures and comment on Red Coats Firing Line in the forum. 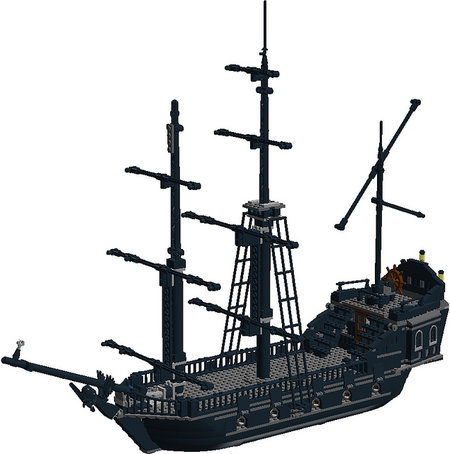 The Black Pearl gets a digital makeover!

Eurobricks member Murdoch17 has given the LDD treatment to everyone’s favourite Disney ship, the Black Pearl! With some visual cues taken from the Imperial Flagship, Murdoch17’s redesign features a closed deck, an increase in fire power, and a bulked-up captain’s cabin. It’s a ship worthy of Captain Sparrow himself!

Stop by the forum to see LDD MOC: Black Pearl in more detail! 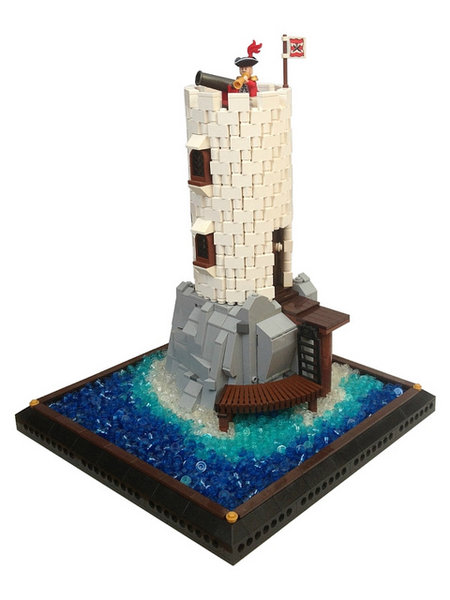 It’s a lonely job, but someone’s gotta do it.

Eurobricks member Robinson presents this quiet diorama, showcasing the lonely life of a Redcoat stuck on watch duty in the middle of the ocean. Some great techniques are employed, such as the rounding of the tower and the SNOT pier.