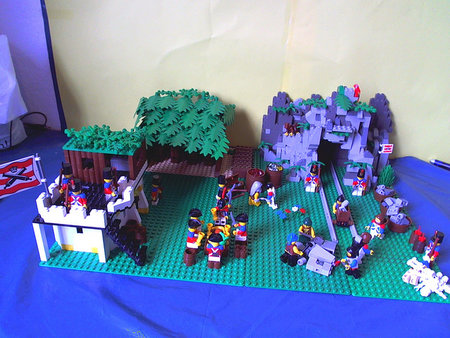 Look down, look down, don’t look ’em in the eye!

Eurobricks member Matthias130182 shows us how the Redcoats treat their prisoners in this scene showcasing a forced labour camp under Redcoat rule. Pirates and Bluecoats alike work together under heavy guard, and the pile of bodies in the corner hints at what happens if they don’t!

Posted by Capt. Redblade in Imperial Guards (Red Coats), MOCs, Land Based | Comments Off on Redcoat Gulag by Matthias130182

The Skull Eye Schooner by Yawgmoth 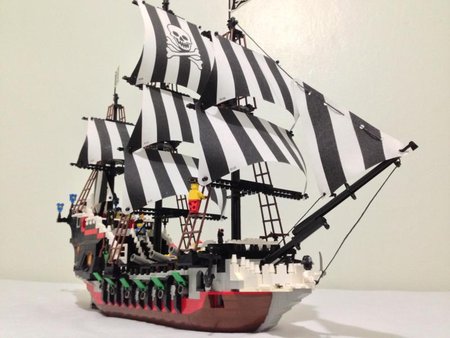 An old favourite with a new twist!

Eurobricks member Yawgmoth has put his own spin on the classic Skull’s Eye Schooner. While still recognizable with its original colour scheme and figurehead, the updated ship also features some welcome new additions, such as more cannons, a closed deck, and a furnished captain’s cabin.

Check out the Skull Eye Schooner in the forum!

Posted by Capt. Redblade in Pirates, MOCs, Ships | Comments Off on The Skull Eye Schooner by Yawgmoth 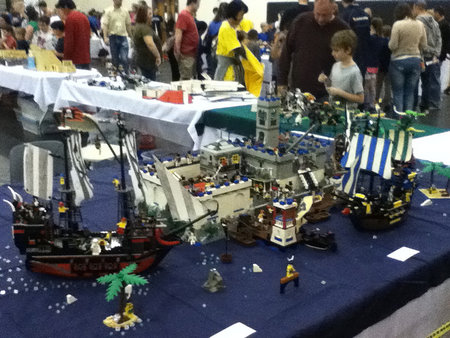 Our own Grimmbeard built this impressive display for the inaugural Scouting for Bricks event in Virginia. Featuring his own custom ships, as well as a fortified Bluecoat stronghold, this “Best In Show” winner is definitely deserving of the title!

Posted by Capt. Redblade in Dioramas, MOCs | Comments Off on Imperial Port Display by Grimmbeard 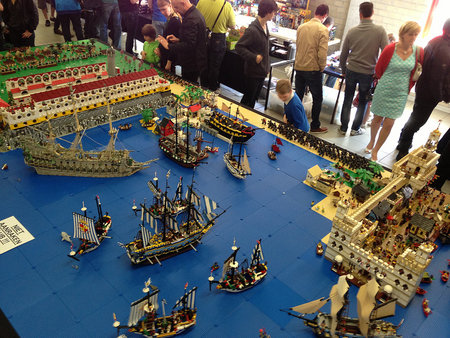 A birds-eye view of this massive scene.

This monstrous diorama, originally presented at Brickmania Wetteren 2013, is the result of the cumulative efforts of Eurobricks users Damaximus, Sebeus I, synbiote, and J.L. Hornblower. Clocking in at a whopping 736×384 studs, this scene features everything from a bustling city port to a replica of the Flying Dutchman as seen in the Pirates of the Caribbean films!

For more vids and pics, check out Giant Pirate Diorama in the forum!

Posted by Capt. Redblade in Dioramas, MOCs | Comments Off on Giant Pirate Diorama by Belug Members 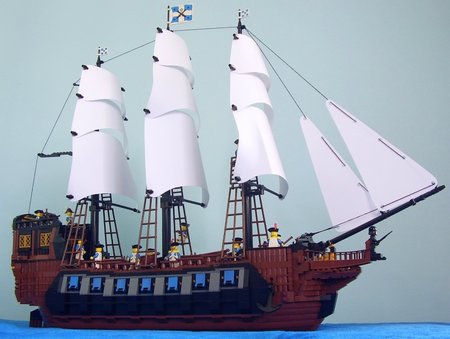 The HMS Eternity comes to us courtesy of Dreamweb, who built it as a flagship for his Bluecoats. With three masts, four decks, and fourteen cannons, this proud vessel will surely prove a formidable opponent to any foolhardy pirates who dare cross her!

See more pics and comment on HMS Eternity in the forum!

Posted by Capt. Redblade in MOCs, Ships | Comments Off on HMS Eternity by Dreamweb 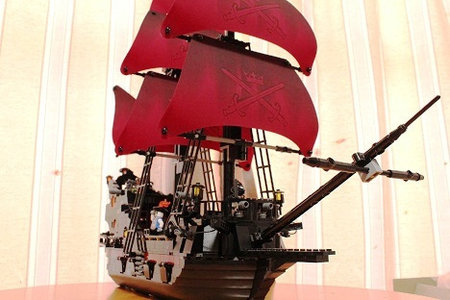 We sail the ocean blue, and our saucy ship’s a beauty!

This small-but-fierce craft comes courtesy of flickr user kenken_LEGO. With its decorative stern, bow-mounted cannons, and a cabin that folds out, this vessel will haunt many a merchant seaman’s nightmares for years to come!

Posted by Capt. Redblade in MOCs, Ships | Comments Off on kenken_LEGO pirate ship 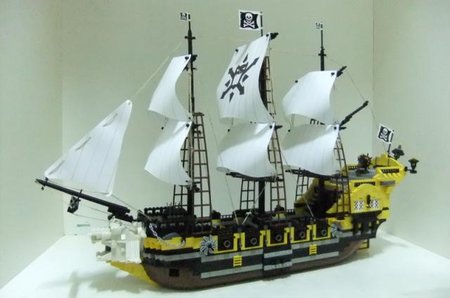 The BSB may have met its match! Brickshelf user o0916781930 brings us this beast of a ship, complete with a hidden cannon inside the figurehead and an intimidating custom sail design. Wouldn’t want to see that thing on the horizon!

Discuss Pirate Ship in the forum.

The Zephyr by Sebeus I 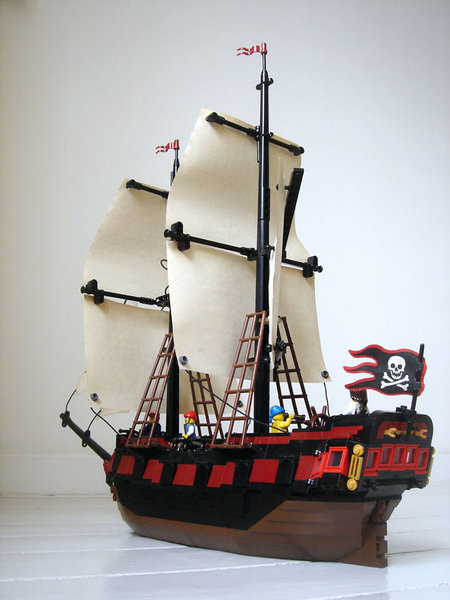 ToR III winner Sebeus I has packed up his blue coat and returns to his piratin’ ways with this latest creation, a 12-gun brig dubbed the Zephyr! It’s not visible in this pic, but particular attention should be paid to the deck, which is constructed largely of brick bricks. (Surprised nobody else thought of that.)

Sail over to the forum and comment on the Zephyr!

Posted by Capt. Redblade in MOCs, Ships | Comments Off on The Zephyr by Sebeus I

And that Kids, is how we Beat those Redcoats by Grimmbeard 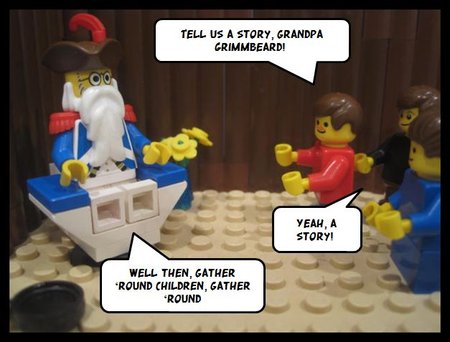 Gather round, children, and I shall tell you a tale…

Grimmbeard tells us a fascinating (if fantastical) story of Redcoat humiliation in this entry for the final round of ToR III. ‘Tis a feast fit for an Admiral!

Stop by the forum to discuss And that Kids, is how we Beat those Redcoats.

Posted by Capt. Redblade in Comics, Contests, Tournament of Retribution III | Comments Off on And that Kids, is how we Beat those Redcoats by Grimmbeard 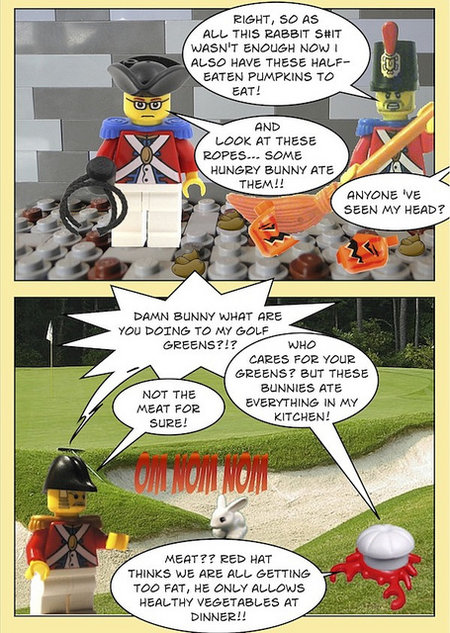 Events have taken a festive turn in Frank Brick Wright’s latest assault on the Redcoats’ dignity in his Round Three entry for the TOR!

Check out An Easter Tale in the forum!

Posted by Capt. Redblade in Comics, Contests, Tournament of Retribution III | Comments Off on An Easter Tale by Frank Brick Wright 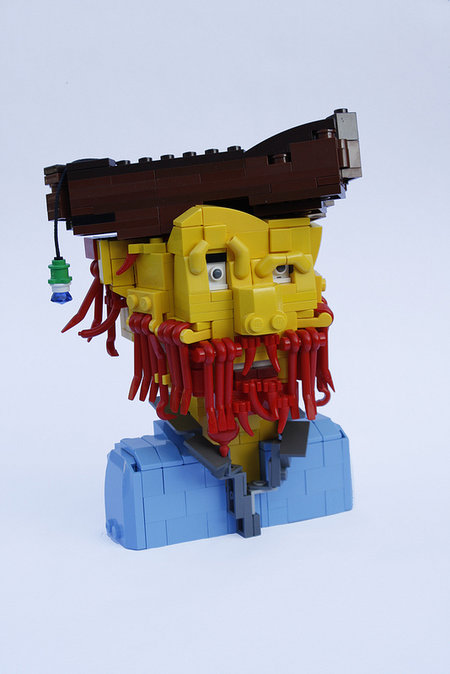 Make sure to get my good side, lads!

Jalkow has created this scurvy-looking scoundrel for a contest at Forbiddencove, but was kind enough to share it with us nonetheless! The red crowbars make for a very shaggy beard and the minifig torsos create a nice raised-eyebrow effect. Looks like he’s already planning his next looting!

Discuss Captain Jimmy in the forum.

Posted by Capt. Redblade in MOCs, Miscellaneous Build | Comments Off on Captain Jimmy by Jalkow

A Day of the Pirates’ Life by KZB 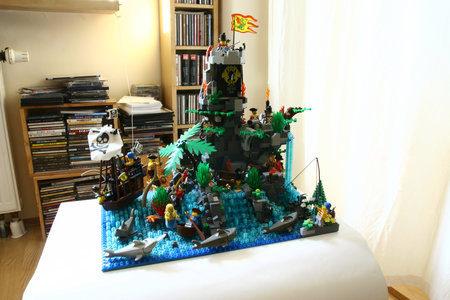 A Day of the Pirates’ Life

Yo-ho, yo-ho, a pirate’s life for me! This busy diorama by Eurobricks member KZB depicts the hustle-and-bustle lifestyle of a merry band of pirates on an island in the middle of the ocean. Of particular note are the small ship made from a dinghy and the very realistic water. Watch out for those sharks!

Discuss A Day of the Pirates’ Life in the forum.

Posted by Capt. Redblade in Pirates, Dioramas | Comments Off on A Day of the Pirates’ Life by KZB