Classic-Pirates.com LEGO® Ambassador, Bonaparte, was fortunate enough to attend LEGO World 2009. Whilst there, he saw a huge Pirate layout with ships and islands, outposts and fortresses, and he was kind enough to share some photos of this spectacular layout in out forum!

Set sail to Pirates at LEGO World 2009 photos in the Pirate forum.

Are you part of Pillage The Village II yet?

Ahoy there mateys, unless you have been living in a cave, you’ll know about Classic-Pirates.com’s Pillage The Village II contest. It’s just like Pillage The Village I this time last year, but with a twist. And the Prize Pool is massive, way bigger than last year. Yep, we have the entire new LEGO® Pirates line for you to win, including an Advent Calendar for the winner of the Creative Critic division. Some websites only offer a few sets as their prizes, but never an entire product line! This is a milestone in history, so make sure you are a part of it!

Race to the Pillage The Village II thread for rules and questions.

Posted by Captain Zuloo in PTVII | Comments Off on Are you part of Pillage The Village II yet?

Wow, we have another minifig scale ship in the making! Perfectionist has started work on a minifig scale (1:52) French 80-gun ship-of-the-line. Next to the massive projects by Teddy and Captain Green Hair, there is a fairly large minifig scale fleet floating around the Pirate forum!

So check out the WIP Superbe by Perfectionist in the Pirate forum!

Posted by Captain Zuloo in Ships | Comments Off on Another minifig scale ship!

Last week we released Part 1 of an exciting interview with LEGO® set designer Jamie Berard, and now we are releasing Part 2! Full of more interesting facts about LEGO trains, The Emerald Night and LEGO in general, this is another ‘Behind The Helm’ that you don’t want to miss.

Classic-Pirates.com is currently undergoing some scheduled maintainance. During this time, some features of the site may be unavailable for use, however Pirates forum operations will proceed as usual.

We thank you for your cooperation in the matter, and we will endeavour to have the site returning to normal as soon as possible.

Posted by Captain Zuloo in About | Comments Off on Scheduled Maintainance

After following the instructions provided by Captain Green Hair and adding his own touch, Eurobricks and Classic-Pirates.com member Perfectionist has shared some Work In Progress images of the newest French frigate on the 7 seas, the Achille.

Check out the WIP Achille by Perfectionist in the Pirates forum!

Posted by Captain Zuloo in Ships | Comments Off on WIP: Achille by Perfectionist

Ahoy there matey’s, today be no normal interview! LEGO set designer Jamie Berard, responsible for great sets like 10194 Emerald Night and 10182 Cafe Corner, has agreed to be interviewed. This is part 1.

Yet another fantastic suprise from one of the best Pirate MOCers out there, ZCerberus treats us to images of his latest creation, Z’s Lighthouse. Fitted out with a working light, this is a wonderful example of what can be achieved with square bricks.

Sail to the pirate forum to see pictures of Z’s Lighthouse by ZCerberus now! 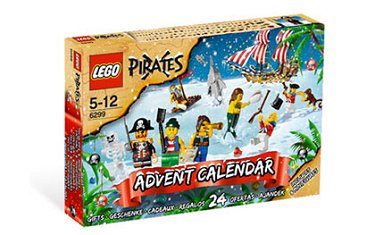 Forum member mikey uses his writing and picture skills to put together this fine  review on 6299 Pirates Advent Calendar. Full of fantastic images of the contents, and what’s inside, use this review to determine if you want to pick one of these up in time for Christmas.

Posted by Captain Zuloo in Reviews | Comments Off on Review: 6299 Pirates Advent Calendar by mikey

‘Behind The Helm’ Episode #11 – Cap’n Blackmoor

Yargh, Cutlass_Iz and Captain Zuloo are pleased to present Episode #11 of ‘Behind The Helm’ – Cap’n Blackmoor. Packed full of audio goodness, we discuss the future of LEGO, his Pillage The Village entry and scallywags putting garden gnomes on the road…

Check out ‘Behind The Helm’ Episode #11 – Cap’n Blackmoor in the Pirate forum! 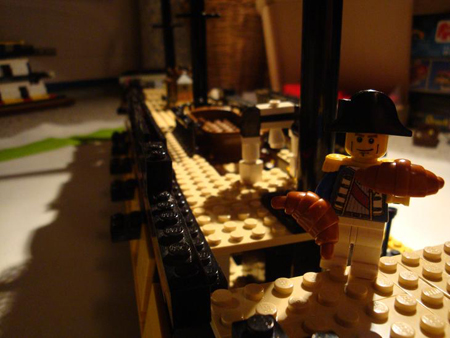 A happy Admiral Criossant eating some criossants on his update L'Aigle

Forum user Admiral Criossant has shared with us the latest update to his fantastic ship. Almost ready to take to the waves, she is looking quite sound. With a lovely interior and an even better exterior, he has done a suprurb job so far, the final product will be brilliant!

Come and see the updates of L’Aigle by Admiral Criossant in the Pirate forum.

Episode #10 of ‘Behind The Helm’ has been released, and again it’s in audio format! Today I have the pleasure of presenting to you a brilliant interview with forum user Cutlass_Iz. We discuss the history, future and present of LEGO, the discontinuation of the 2009 Pirates line, and Pirate themed restaurants! Have a listen below:

So what do ye think? Give us yer feedback on the audio format and the interview itself!

Download and leave your feedback on the audio ‘Behind The Helm’ in the Pirates forum.