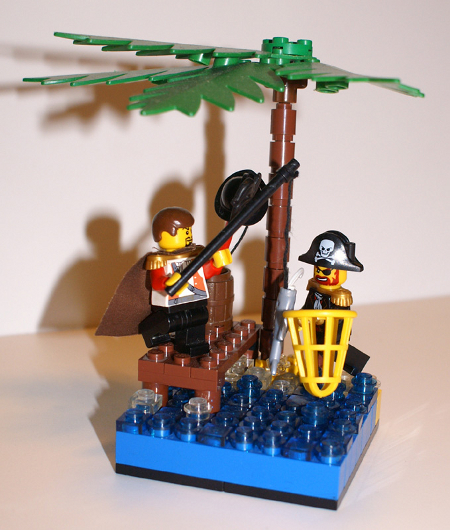 “Quality time with friends”
Cpt. Trubal and Cpt. Brickbeard usually act as a competition to each other. But, as it often happens, after work they happen to be very good friends.
Both of them love their work, and also they both have similar hobbies. One of them is Fishing, which they like to do together.
This time its Cpt. Trubal who caught the fish, and Brickbeard grabbed the net to help him put it in the barrel…

What are you waiting for? Head over to the Pirate Forum and discuss “Quality time with friends” by trubal!

Posted by Sea Eagle in PTVII | Comments Off on PTVII: Quality time with friends by trubal

EuroBricks moderator WhiteFang reviewed the first official Pirates Advent Calender! It’s filled with little gifts for every one of the 24 days! It has 8 figures; 2 Imperial Soldiers, 4 Pirates, a Mermaid and a skeleton. Beside the figures, there are also multiple animals and accessory for the figures.

Check out the review and make a comment at the Classic-Pirates.com forum! 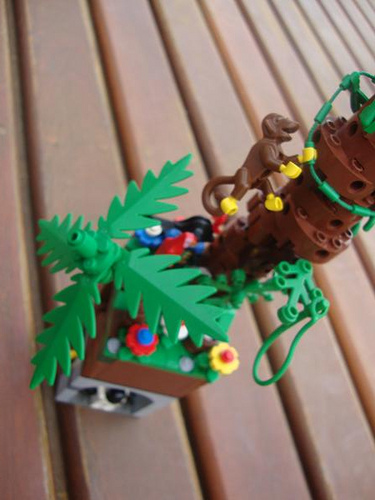 The sweet hobby: watering and taking care of his flowers.
By the way, after intercepting a letter from his old crew, he discovered that they captured the admiral’s daughter and they dont wanna share the jackpot… In this moment his old crew is torturing the daughter to get information and Richard has a great problem:  to choose between the great treasure or the true treasure- his little paradise.

Posted by Sea Eagle in PTVII | Comments Off on PTVII: Richard the Avenger Hobby by SirGoldenKnight

Warrant Service
An Imperial Captain is wanted for cowardice and abandonment for having fled the village when the pirates last attacked. A warrant has been issued for his arrest and a young Imperial Officer hopes to earn a promotion by bringing the Captain to the magistrate. The Officer knocks on the door, with chains in hand, ready to serve the arrest warrant. Upon receiving no answer, the Officer breaks down the door and begins searching the house.

Hearing the knock at his door, the Captain runs to hide in the basement where he encounters another problem. Can the Captain quietly kill the scorpion using his frying pan without the Soldier upstairs hearing him and finding his hiding spot?

Click here to go to “Warrant Service” in the Pirate Forum

Posted by Sea Eagle in PTVII | Comments Off on PTVII: Warrant Service by JKooL 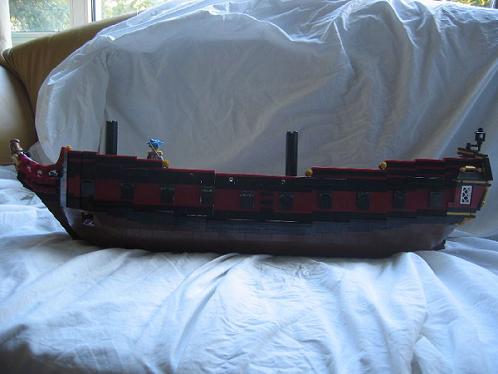 It's looking good so far!

If you’re not so good with building ships and you really want to build one, you can follow the steps of one of our best ship builders; Captain Green Hair! He shows you how to make a good-looking frigate!

Posted by Sea Eagle in Tutorials, Ships | Comments Off on Build a frigate with Captain Green Hair 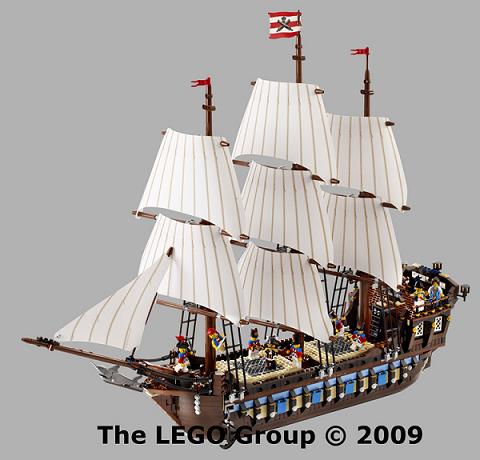 All hands on deck! This amazingly detailed and realistic historical ship has three removable sections. The main hull contains 4 firing cannons, ammunition crates, muskets, torches, cannonballs, a prison with a rat, a fully-equipped shipâ€™s kitchen, working anchor, moving rudder and a saw shark figurehead. The front deck has an opening door to the inside of the ship and sails with masts and rigging. The back house deck has opening doors to the captainâ€™s chambers containing a map, poison bottle, organ and a treasure chest full of jewels and gold. The Imperial Flagship has 6 opening windows, a telescope and sextant and 3 deck lanterns. Includes 9 minifigures: the shipâ€™s captain, his daughter, a pirate captain prisoner with shackles, the shipâ€™s cook, a lieutenant, and 4 soldiers. Measures 29.5â€ (75 cm) long and 23.6â€ (60 cm) tall. Ages 14+. 1,664 pieces

Click here to discuss the Imperial Flagship in the Classic-Pirates.com Forum!

General Armendariz, the brickflick genius pressed into the Classic-Pirates.com crew, has treated us with another oscar-winning motion picture: Shipyard Shenanigans, Episode One: “Last words, either way.” It tells the humorous story of a man’s last words as his ship crumbles into the sea – but I won’t spoil the surprise; be sure to grab some popcorn, turn off the lights, and switch on the show!

You may notice many familiar faces starring in the flick, Captain Zuloo, Mister Phes, and Captain Blackmoor among them. Some viewers may wonder, “What is this Shipyard Shenanigans?” Well, we have the same question for you! Sail by the Classic-Pirates.com forum and tell Armendariz your thoughts and opinions.

Posted by Sea Eagle in Brickfilms, Shipyard | Comments Off on “Last words, either way”

And the winner is – wait a second, it isn’t over?!

Posted by Sea Eagle in Contests | Comments Off on And the winner is – wait a second, it isn’t over?!

Governor Broadside, by Hound Knight, is only one of numerous works that await you!

Eurobricks and the Pirate forum are lucky to have been graced by numerous modern-day da Vinci’s, such as Apache, Capt. Kirk, and Hound Knight, and they’ve been at it again. The three of them have beautifully illustrated Imperial Guards, Pirates, and even the infamous Captain James Hook, the scurvy dog.

Each of these artists have their own unique styles that set them apart: Capt. Kirk skillfully crafts  his work with the computer; Apache mixes the minifigure and human forms in his intricate drawings; and Hound Knight expertly shades with the colored pencil.

Be sure to take a peek at Hound Knight and Apache’s historical artwork and Capt. Kirk’s 24th Regiment of Foot!

Posted by Sea Eagle in Minifigs, Customization | Comments Off on Piratical Masterpieces 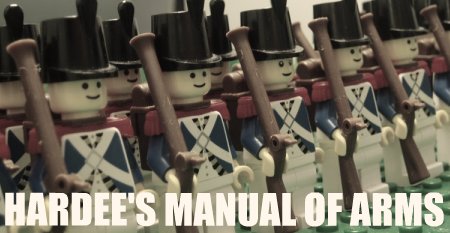 It’s all very well to send your Bluecoats and Redcoats marching off to battle, but any real soldier knows that the only way to win a battle is to be trained and prepared, and the only way to train and prepare your troops for battle is with Hardee’s Manual of Arms. And luckily for you, manual-loving Imperial Scouts has provided us with just that!

Learning the many accurately described positions and formations can help you  authentically reproduce various actions in MOCs, BrikWars games, and Brick Flicks alike, so make sure you read the whole of ImperialScouts’ Manual of Arms. Then remember to sail by the Discussion Thread and compliment his efforts!

The Battle Rages On…

Standing on opposite sides of the battlefield, Redcoats and Bluecoats stare at each other, hatred burning in their eyes. An orange fox in pirate attire steps between the two: moderator doubling as a mediator Zorro determines which side goes first. Redcoats begin! Bluecoats begin! All around the Mediterranean, one army raises scaffolding while the other assigns spies. That’s right, Pirate fans – the 1st Annual Redcoat VS. Bluecoat Tournament of Retribution is well under way!

Four skirmishes are currently in progress in the Pirate forum. These are…

Raging Redcoats Regiment vs. Out of the Blue

Each team has spectacular builders and fantastic entries – but only one side can prevail. As devoted team members work to get in their two vignettes, the tournament judges have the difficult job of choosing the winning side amongst the hordes of notable creations. Twenty creations must be taken into account per thread, each being scored points for build, wit, historical accuracy, and much more. And so far, the judges have been presented with a difficult challenge!

Part of that challenge, unfortunately, involves finding the entries themselves. Useless spam, cruel insults, and other garbage have been paraded around each tournament thread, and something has to be done about it. There are some comments that are constructive, and others that are not. Try to stop bashing the other side – though at times, it can seem so fun – and provide criticism and compliments that don’t insult or upset someone else. We’re glad that everyone’s having fun, but this is just a game.

Are some of you in the dark and somehow have no idea what this commotion is? You can learn all about it in the tournament enlistment thread!

We have a new Pirates Regulator!

After our Pirate Moderator Phred left because of his work and studies and because of the constant growth of both the forum and Classic-Pirates.com, we decided to appoint a fresh Pirate Regulator to help out Slyowl and the rest of the team.

Erdbeereis, as Shipyard Master, and because of his dedication and forum knowledge, was just an obvious choice!

So, head over to the Classic-Pirates.com Forum and welcome Erdbeereis!

Posted by Sea Eagle in Crew | Comments Off on We have a new Pirates Regulator!