Get a load of all these prizes!

Registrations for Tournament of Retribution II open today, so get yourself to the LEGO Pirates Forum RIGHT NOW!

Be sure to checkout the prize thread and join in on the buzz!

The Tournament is about to return!

From the dawn of time they have been at war. No one knows how it started or why. Whatever the reason, every molecule in their ABS plastic is filled with contempt and disgust for the opposite side. For the safety and harmony of brick loving folks everywhere this animosity is held in check by the most advanced technology and the toughest moderators much of the year…but inevitably this much rage can’t be contained and it explodes into…

The Second Annual
Redcoats vs. Bluecoats Tournament of Retribution!

Visit the LEGO Pirates Forum to check out the AWESOME Prizes!

Posted by Sea Eagle in Tournament of Retribution II | Comments Off on The Tournament is about to return! 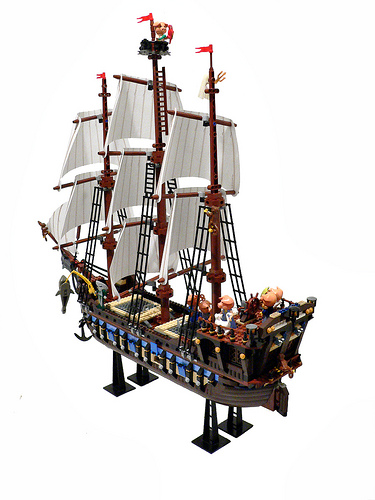 What are ye waiting for?! Head over to the Pirates Forum and discuss “Baron von Piggenstein’s Ship” by eti.!

Posted by Sea Eagle in Ships | Comments Off on Baron von Piggenstein’s Ship by .eti

Poll: Do you find the Pirate Indexes useful?

Maintaining the Pirate Indexes is a difficult job which uses up valuable time. If you were to only use them occasionally, or not at all, the staff’s efforts to keep them in check would be fruitless. That’s why Mister Phes wants to know if you find them useful – would you prefer that the indexes were to be kept up to date or that the staff embark on other endeavors?

Make your decision in the Pirate forum!

Posted by Sea Eagle in Polls | Comments Off on Poll: Do you find the Pirate Indexes useful? 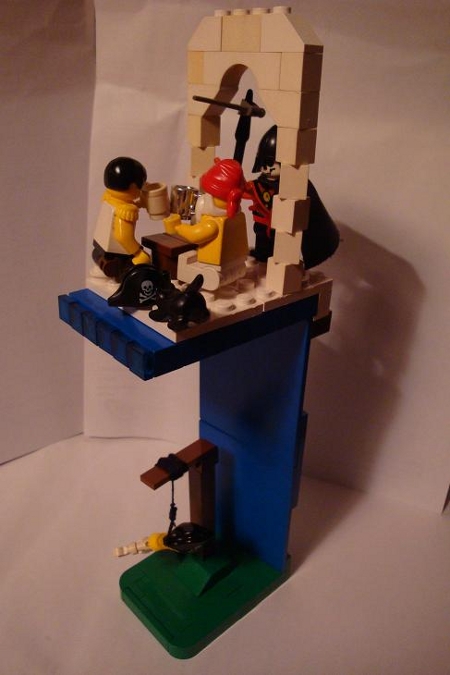 Captain CaLego Jack has been a pirate for most of his life. So in the end he got hanged.But instead of going straight to hell, he sneaked into heaven. There he began a new life.He is now friendly to other people and drinks tea with them.But deep inside he is still the same pirate that he has always been. In this entry we see how death himself comes to get CaLego Jack so he finally goes to where he belongs. Of course Jack doesn’t want to go to hell so he hides himself behind his cup of tea

Head over to th Pirate Forum and discuss “Captain CaLego Jack in heaven” by Admiral Croissant!

Posted by Sea Eagle in PTVII | Comments Off on PTVII: Captain CaLego Jack in heaven by Admiral Croissant 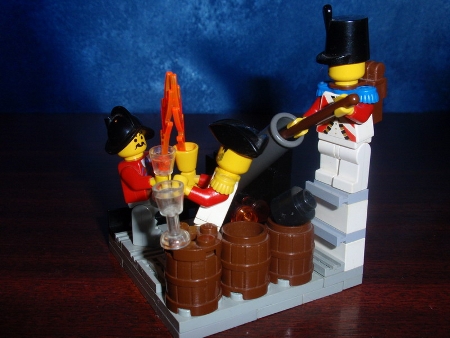 What use can be made of a cannon barrel during peace time? You can boil an excellent punch in it!

What are ye waiting for? Head over to the Pirate Forum and discuss “Cooking Punch” by General!

Posted by Sea Eagle in PTVII | Comments Off on PTVII: Cooking Punch by General 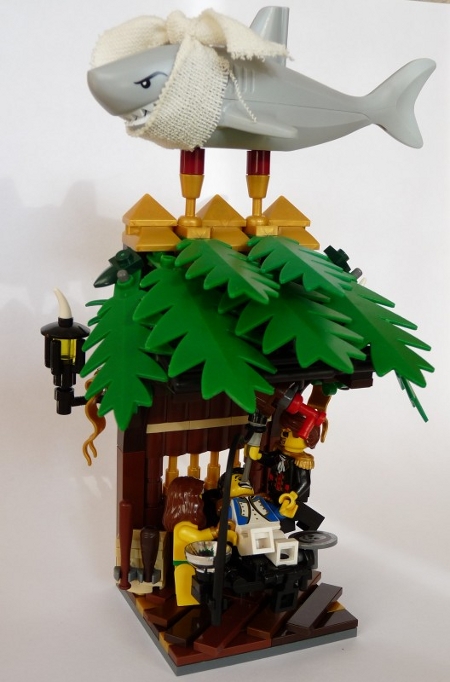 After years of fighting, plundering, causing pain and trouble, Cap’n Blacktooth resigned and looked for a simple way to get richer. On his little Island, Gold wasn’t a problem, but the health system was terrible. So he decided to work a dentist – which in fact is nearly the same as he did in first professional live: Torturing people and steal all their valuables…

Head over to the Pirate Forum to discuss “Pain in Paradise” by jansued!

Posted by Sea Eagle in PTVII | Comments Off on PTVII: Pain in Paradise by jansued 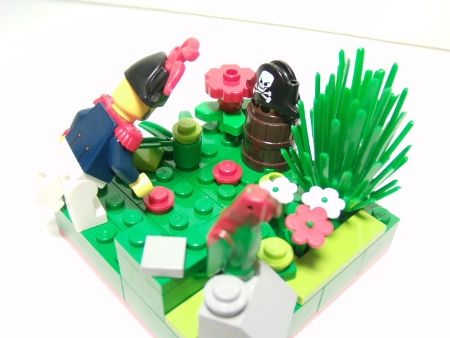 Once when Captain Brickbeard was tired of plundering, He met up with the Governor and they signed a treaty and became friends. But after lots of fancy parties at the Governor’s Mansion, Brickbeard got tired of not doing any thing “fun”, so one day he set up a trail of candy (the Governor’s favorite food) into the forest. At the end of the trail, Brickbeard hid in a barrel, waiting to jump out and scare the governer once he got to the end of the candy trail.

Head over to the Pirate Forum to discuss “The Rial of Candy” by curtisrlee!

Posted by Sea Eagle in PTVII | Comments Off on PTVII: The Trial of Candy by curtisrlee

PTVII: The simple Joys of the clueless Soldiers by Scop 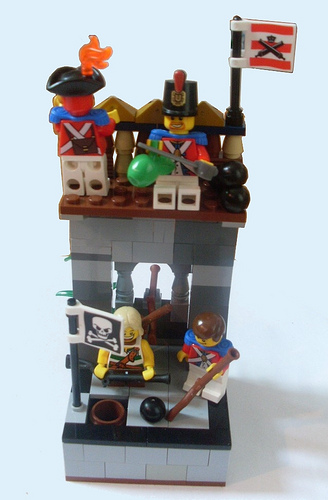 There was a time, that the people called “The clash of the forces”, when pirates and soldiers fought a war, that seemed to be endless. But after everything was pillaged and plundered and burned and after ten thousands of people had lost their lives, the war came to an end, when the pirates suddenly disappeared.
Time passed by and the people tried to rebuilt their destroyed houses and harbors.
But the soldiers, not knowing what to do with all the weapons, soon began to be bored. Until someday one of them developed a new form of game.

Head over to the Pirate Forum and discuss “The simple Joys of the clueless Soldiers” by Scop!

Posted by Sea Eagle in PTVII | Comments Off on PTVII: The simple Joys of the clueless Soldiers by Scop 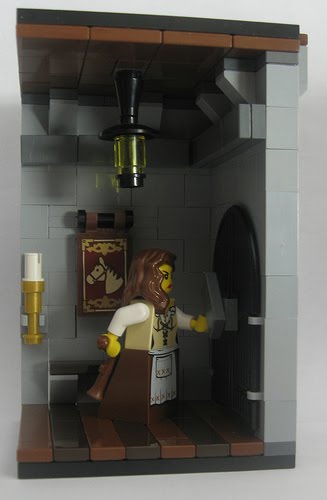 While heading up stairs she hears a knock at the door.
Annoyed and a little scared she gets out the flintlock
from the desk drawer and heads to see who her late night
visitor is..

Well..Head over to the Pirate Forum to discuss “The Late Night visitor” by Nate

Posted by Sea Eagle in PTVII | Comments Off on PTVII: The Late Night visitor by Nate

PTVII: Tell me a story, Grandpa by Lorentzen 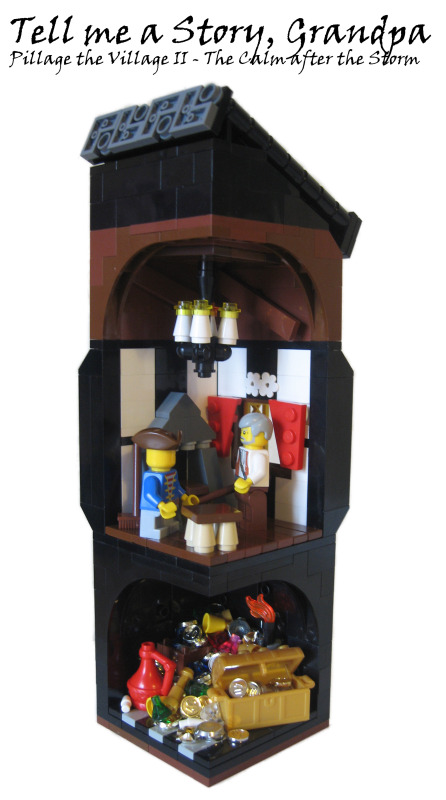 The story:
After several years of hunting down pirates throughout the caribbean sea, the old Admiral has retired and he now enjoys his life with his wife.

Every saturday afternoon, the old Admiral’s grandson Willie comes to visit him. And every time, Willie asks: “Please tell me a story Grandpa” for Willie loves to hear those stories of swashbuckling fearsome pirates, courageous soldiers and dangerous sharks roaming the sea.

Little Willie does not know, however, what lies under his feet…
The old Amiral may have been a good and just Admiral, serving his majesty for many many years but he, did however, always steal a tiny bit of treasure from the pirates he defeated, and saved that treasure for his retirement. This is what lies beneath the wooden planks in the old Admiral’s living room, and he plans to give his beloved grandson what is left of that magnificent treasure, when he one day dies.

The attic that’s full of hay to keep the house warm, hides something… a treasure map which the old Admiral plans to use in a few years time, when Willie is old enough to join him on his beloved Caribbean Clipper. The old Admiral has kept his uniform, bicorn and sword in his attic as well. Apparantly he’s not ready to give up on his eventful past just yet.

Head over to the Pirate Forum to discuss “Tell me a story, Grandpa” by Lorentzen!

Posted by Sea Eagle in PTVII | Comments Off on PTVII: Tell me a story, Grandpa by Lorentzen 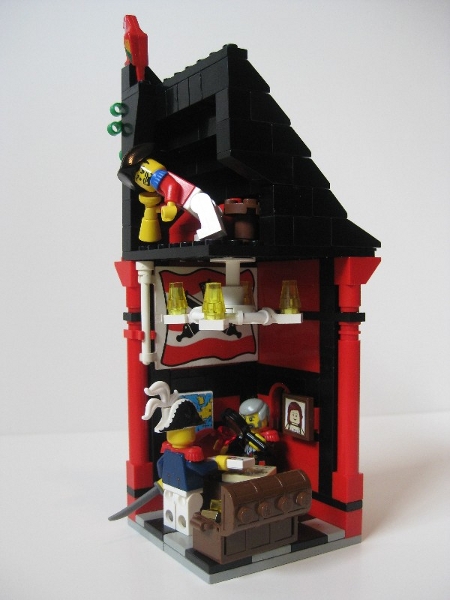 Oh no! The Admiral is attempting to bribe a member of Parliament! How will that end? And who is that above them? A bluecoat spy? An informer payed by Parliament? Or a redcoat trying to do the right thing? Only time will tell…..

In the meantime, head over to the Pirate Forum and discuss “Imperial Politics” by Admiral Ron!

Posted by Sea Eagle in PTVII | Comments Off on PTVII: Imperial Politics by Admiral Ron