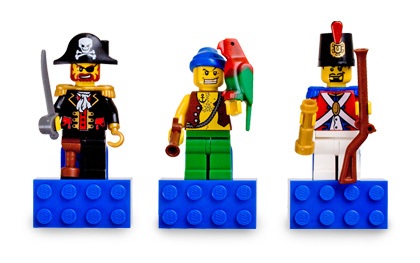 Three on a row! 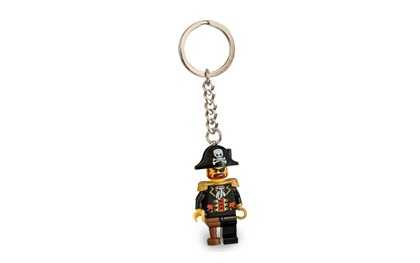 Brickbeard's will guard your keys for you!

Our member, Wouwie, has spotted a Captain Keyring and a Pirates Magnet set!

Discuss this find with the other members in the Pirate Forum!

Posted by Sea Eagle in New & Upcoming | Comments Off on New sets spotted!

“Big Daddy” Nelson, an admin of the Forbidden Cove, has created a wonderful alternative version of the 6242 Soldier’s Fort. Although the modules are based upon the new style of the original 6242 set, he did use some of the classic minifigs and parts. As you can see, it worked out just fine!

Something old, something new… mix it together, and you get the “Other side of the Fort”…

Posted by Sea Eagle in Soldiers (Blue Coats), Land Based | Comments Off on Le Baton Rouge, by “Big Daddy” Nelson

The FRS Shakespeare by SlyOwl

It's an Imperial lightening rod!

. . . But it should obviously fall under the “Floating Rock of Magnificence” category instead.

Go on and discuss the Imperial Lightening Catcher in the Pirate forum!

Captain Pete never backed away from a challenge! By DARKspawn

Captain Pete never backed away from a challenge

…but admittedly had thought that “Fish Monster Bay” was just another one of those over-dramatisations he’d come to expect from 16th Century maps!

Click to discuss Captain Pete never backed away from a challenge! By DARKspawn in the Pirate Forum.

Posted by Sea Eagle in Pirates, Rafts | Comments Off on Captain Pete never backed away from a challenge! By DARKspawn

Pirate: Keep Out by Crimson Wolf

No one pays attention to signs anyway... right?

This clever vignette by Crimson Wolf is packed with all sorts of details, including blue rubber bands around the tentacles and the pirate’s little accident when he encounters the sea monster…

Discuss his fate in the Pirate forum!

Posted by Sea Eagle in Vignettes | Comments Off on Pirate: Keep Out by Crimson Wolf

Click here to go to the UK Shop At Home!

And, click here to discuss this news in the Pirate Forum!

Thar She Blows! by SirNadroj

SirNadroj blows us away with what is perhaps his greatest creation ever, a beautiful Dutch whaler:

The MOC is complete with blocks of ice, a gigantic whale, and marvelous details including a polar bear and an innovative flag design. Discuss the whaling expedition and discover the many masterful touches of “Thar She Blows!” in the Pirates forum!

Posted by Sea Eagle in Ships | Comments Off on Thar She Blows! by SirNadroj

The Black Maiden by Crimson Wolf

Crimson Wolf presents the wonderful Black Maiden, a small, SNOT vessel employed by the highest bidder, whose crew is almost entirely composed of crippled misfits. Due to this, watching them attempt a pillaging would be quite a sight!

It'd be intriguing to see how they'd raid a village...

Now discuss the Black Maiden in the Pirates forum!

Announcing the winners of the staff division in the PTV contest!

Pillage The Village was also open to the staff in a separate division, although there were no prizes to be won, they sure didn’t let us down!

He did it before, and he will do it again, SlyOwl wins! Congratulations to all four staff members that entered this division, now let us do a bodycount of the other staff members, since it appears there was a lot of slaughtering in these MOCs! And you wonder why you didn’t win, Captain Green Hair?

We await your opinion, so go discuss the staff division winners in the Pirates forum!

Posted by Sea Eagle in Contests, Ships | Comments Off on Announcing the winners of the staff division in the PTV contest!

Congratulations to the winners and thanks to everyone that participated in the Creative Critics Award!

Congratulate the winners in the Pirates forum!