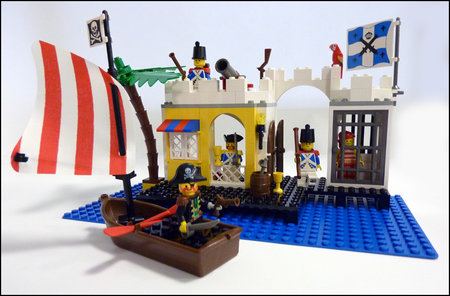 A classic never dies, unlike the Bluecoats, who will die in horrible, unthinkable, tragic, and hilarious ways in the TOR III

Do you ever get a sense of nostalgia?  Do you ever wish LEGO would go back to yesteryear?  Classic-Pirates.com’s own Boomchil had that same feeling when he picked up a pile of classic sets to review!  This review is for the classic 6267 Lagoon Lock-Up, a set featuring the periwinkle pansies Bluecoat soldiers from 1991.  The set cost Boomchil a staggering $80.00 USD to pick it up on Bricklink, so don’t let his investment go to waste, and check out the excellent review today.

Save your pennies then discuss Lagoon Lock-Up Review in the forum now!

Posted by ZCerberus in Reviews, Sets | Comments Off on Lagoon Lock-Up Review by Boomchil

Pirates vs. Islanders by SlyOwl 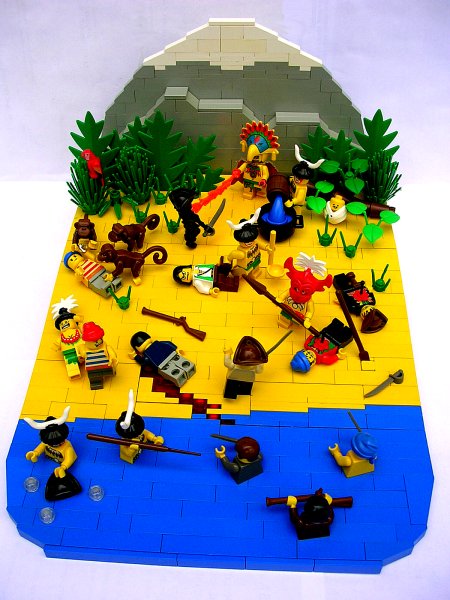 Need inspiration for TOR III round 1?

Perhaps you’ve heard of a builder named SlyOwl, if not, you REALLY need to hit the web more.  SlyOwl is one of the most prolific builders ever and here we take a look at an older MOC showing islanders facing off with piratey foes!  There are some great details like the bloody sand, the beach that slopes upwards, the pirate being charred black by the angry islander priest and the wizard hat used as water poured from a barrel!  As it so happens, this MOC also contains the subject matter of the first round of the Tournament of Retribution III, islanders!  Do not forget to sign up for TORIII while you take a gander at SlyOwl’s work.

Dust off your old MOCs, sign up for TORIII and discuss Pirates vs. Islanders in the forum.

Posted by ZCerberus in Islanders, MOCs | Comments Off on Pirates vs. Islanders by SlyOwl 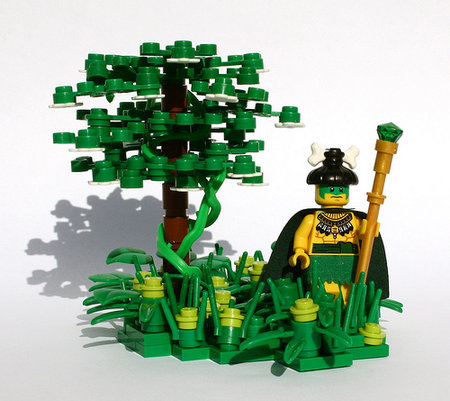 We bow before you CMF priest!

LEGO may not be producing new pirate themed sets now, but we can still load up on pirate minifigures!  With every wave of new CMFs, we get opportunities to build new and unique figures to populate our MOCs.  Buurli_Burri blends the Aztec warrior and hula girl figures with and islander’s hair piece to make this cool Aztec priest.

Mix and match your CMFs then discuss Aztec Priest in the forum.

Posted by ZCerberus in MOCs, Vignettes | Comments Off on Aztec Priest by Buurli_Burri

The Spanish Fort by TheBrickAvenger 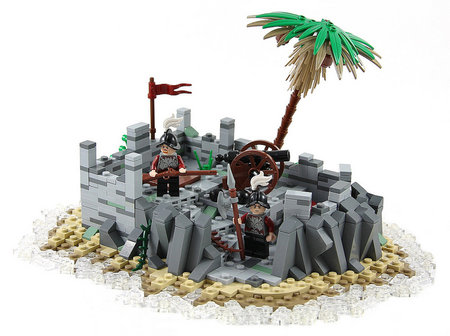 Another new creation by TheBrickAvenger shows the power of good photography.  The build is clean and beautiful, I especially like the two-tone sand and the palm tree, but the MOC is enhanced greatly by the perfectly clean background and evenly lit photo.

Sharpen your photography skills then discuss The Spanish Fort in the forum.

Posted by ZCerberus in Imperial Armada, MOCs, Land Based | Comments Off on The Spanish Fort by TheBrickAvenger 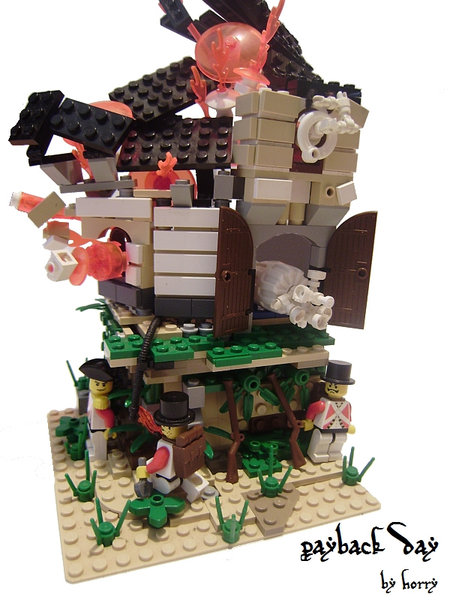 A little birdy told me the redcoats may soon be seeking some retribution.  There is no faster path to revenge than a big old explosion.  Horry does an awesome job of capturing a MOC that looks like it is in mid explosion!  I am especially fond of the smoke and the way the building is flying apart.

Light the fuse, then discuss Payback Day in the forum now!

Posted by ZCerberus in Soldiers (Blue Coats), MOCs | Comments Off on Payback Day by Horry 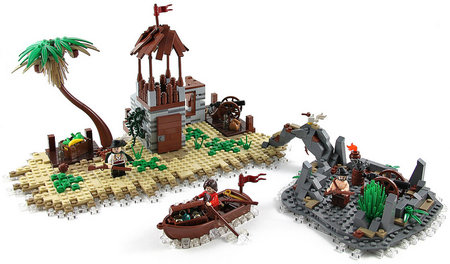 Inspiration can come from odd places...

Inspiration can come from many places.  TheBrickAvenger based this MOC on a PLAYMOBIL® set by the same name.  TheBrickAvenger’s version is packed with fine details like brick-built cannons and bird, a dinosaur tail palm tree and the subtle and well executed ground shading.  As a bonus bit of fun, see if you can spot all the collectible minifigure parts used in this MOC as well.

Look for inspiration in a strange place, then discuss Pirate Lagoon in the forum.

Posted by ZCerberus in MOCs, Land Based | Comments Off on Pirate Lagoon by TheBrickAvenger 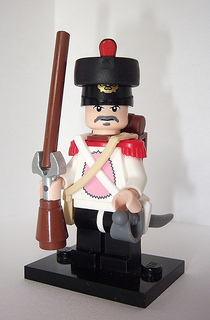 Even the bunny suit CMF has its uses!

We have all seen hundreds of imperial soldiers, Napoleonic armies, or pirates with the same blue and red bandanas, so Tanotrooper spices things up by bringing us three new pirate era minifigures of his own design.  My favorite part is there are no stickers or specialty parts, it’s pure LEGO!

Bust out your box of minifigures, then discuss Pirate Era Minifigures in the forum now!

Posted by ZCerberus in Armies, MOCs | Comments Off on Pirate Era Minifigures by Tanotrooper 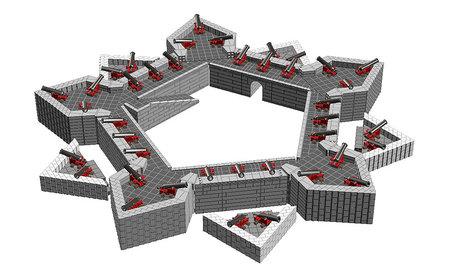 I do not normally go for digital LEGO models but this modular fortress, designed by Eurobricks member Skipper, is a must see.  Though the shapes are awesome, I am most drawn to the studs not on top techniques used to create them.

Posted by ZCerberus in MOCs, Land Based | Comments Off on Vanguard Fort by Skipper 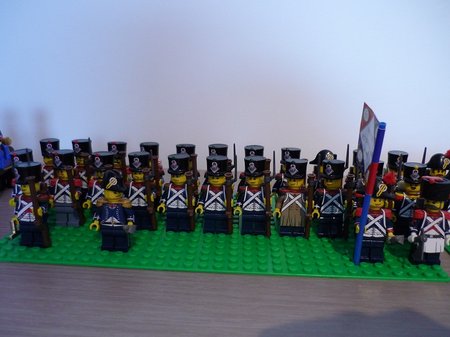 I love a good Napoleonic army builder and michaelozzie has delivered 3 regiments fighting under Marshal Ney in 1805.  The figures have great detail and the custom pieces (some from woody64) look fantastic- michaelozzie even gives us a little history lesson on his choices for the regiment details!

Read your history book then discuss Marshal Ney’s VI Corps in the forum! 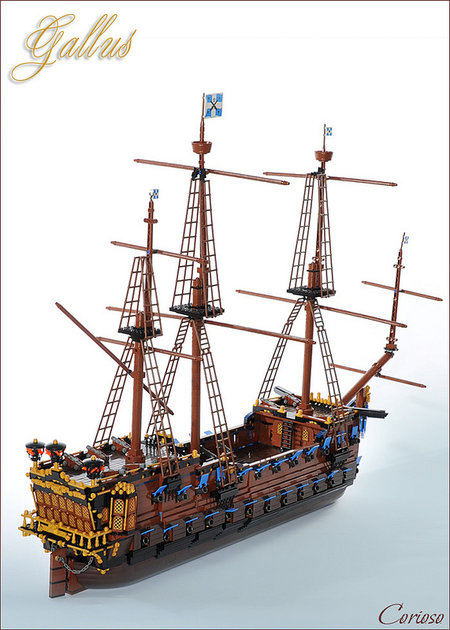 This is your Imperial Flagship on steriods

After a 6 month time investment, Eurobricks’ member Corioso brings us a ship-of-the-line named Gallus.  Corioso mixed many modern colors and parts with some old school blue coat soldiers to produce this super ship.  When perusing the finer details, be sure to check out the custom cannons, custom lanterns and the special guest serving as figurehead!

Round up your blue coat soldiers, then discuss Gallus in the forum.

Posted by ZCerberus in MOCs, Ships | Comments Off on Gallus by Corioso

The Golden Hinde by Rufus and Pandora 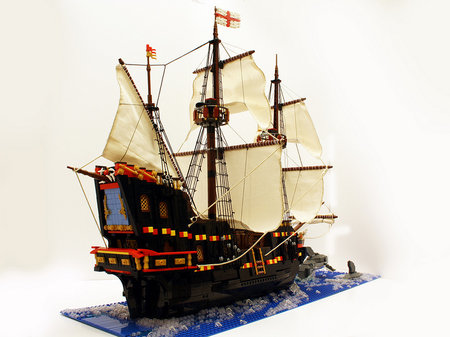 Proving that two heads are better than one, Eurobrick members Rufus and Pandora have collaborated to build a replica of Sir Francis Drake’s ship, The Golden Hinde.  Highlights include the color choices, the excellent shaping using both pre-fabricated hulls and bricks, the custom made sails, the functional custom rigging, the brick-built sea life, the tiled deck and the dramatic stern with many excellent details.  If you want to see this beauty in person, Rufus and Pandora say it will be making an appearance at Brickworld Chicago in less than a month!

Book your trip to Chicago, then discuss The Golden Hinde in the forum now.

Posted by ZCerberus in MOCs, Ships | Comments Off on The Golden Hinde by Rufus and Pandora 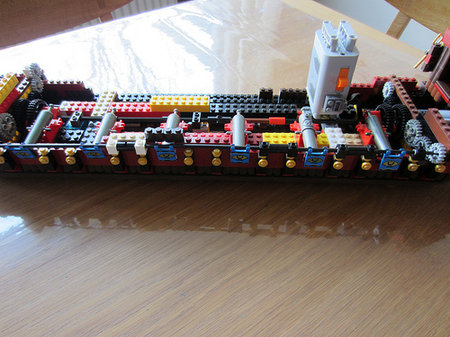 Another entry in the “functional” design category, Eurobricks’ member Morthen uses a power functions motor to open his gunports and move the cannons into postion.  Head to the forum to check out the video of the motorized gunports in action and stay tuned as Morthen promises a completed version of the ship soon.

Get your motor running then discuss Motorized Gunports in the forum now.

Posted by ZCerberus in MOCs, Miscellaneous Build | Comments Off on Motorized Gunports by Morthen