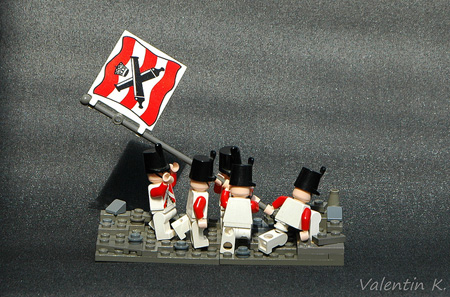 The ultimate shrine from a devoted fan

As part of the Tournament of Retribution II Skalldyr has created this shrine to honour his beloved side in the war, the Redcoats. This MOC has been inspired by ‘Joe Rosenthal’s: Raising the Flag on Iwo Jima’, a similarly styled MOC.

The first ever Eurobricks LDD contest

Eurobricks, home to the Classic-Pirates.com forums is running its first ever LEGO® Digital Designer (or LDD for short) contest! The contest covers all themes, so Pirate fans that means you too.

There are 2 categories for entrants to participate in, you can build solely in LDD or build in LDD with a real LEGO® model to back it up. Each theme has its own posting thread but all entries will be judged per category. Nevertheless now is a great time to show off your LDD building skills!

Slap on your building cap and head on to the forum to read the full rules!

The Burning of Washington by Ratshot 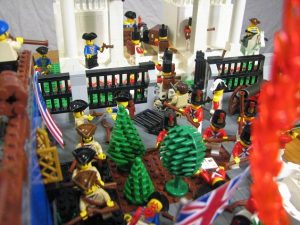 Can the President escape before it's too late?

The war of 1812, the Americans had attacked the Canadians capital and they were out for revenge. Led by British forces, the Canadian forces attacked Washington DC with little American resistance. Chocked full of action and battle, this is one of the most lively ‘Bayonets at Dawn’ entries we have seen.

Provide feedback on The Burning of Washington in the forums

Posted by Skipper24 in Bayonets at Dawn, Contests, Land Based | Comments Off on The Burning of Washington by Ratshot 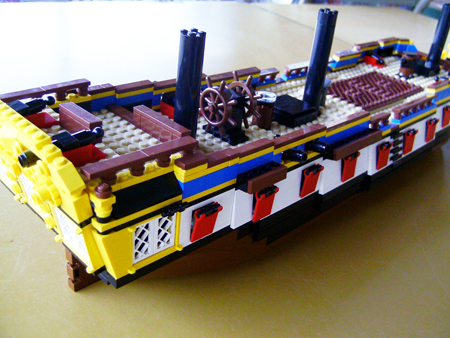 V3 of the Grandeur is a complete rebuild!

The first time Captain Zuloo first showed us his MOC the ‘Grandeur’, a majestic 28-gun frigate, was early last year. From then it has progressed greatly and has gone through many revisions and total restructures. Now nearly all that is left to complete are the masts and the remaining small details that can ‘make or break’ a MOC. I for one will be following this beautiful ship closely now it’s in the final stages of its build. In the latest update Zuloo has really shown us through his progression how much time and effort it takes to pull off one of these great MOC ships.

Posted by Skipper24 in Imperial Armada, Ships | Comments Off on Grandeur a WIP ship by Captain Zuloo 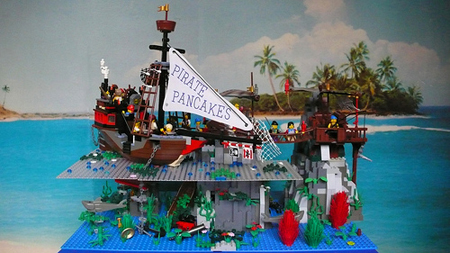 Beneath the boat lay the loot of many pillaging missions

After yet another unsuccesfull journey, Captain Horatio and his crew settled in a little town. The Captain fell in love with a young maiden, as a present for her the love struck captain decided to turn his boat into a house where both of them could live till the end of their days. However this was not all there ship would be also a restaurant where they would sell pancakes.  Hence the name Stanley Kbrick has chosen for his MOC, ‘Pirate Pancakes’. 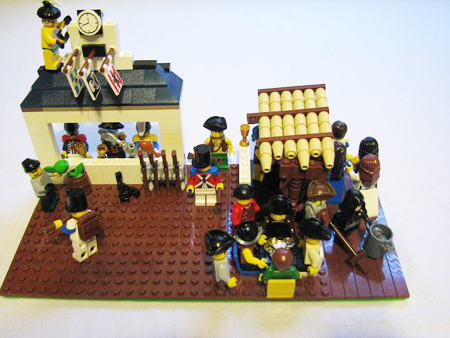 The first contest, a skeet tournament

Pirate captains often suffer from ‘Post- war Syndrome’, a long hatred for their enemies. After regular visits to the crazy house the waring captains are given a regime where they are set against each other in a number of contests.  Only time will tell to see if these contests really work out, or if they’ll just increase the tension.

Click to discuss ‘Skeet Club’ by Ratshot in the forums

Posted by Skipper24 in PTVII, Land Based, Miscellaneous Build | Comments Off on PTVII: Skeet Club by Ratshot

The crimson red rooftops of Puerto de la Cruz are a welcome sight for any Imperial Soldiers. Decked out with a look out tower and armored fortress this port is a fair force to be reckoned with.

Daniel G’s large MOC ‘Puerto de la Cruz’ is truly fantastic. The gleaming white buildings are compromised with dashes of yellow and red. Many fine details have been added such as bridges, Pirates and many more.

Posted by Skipper24 in Imperial Armada, Land Based | Comments Off on Puerto de la Cruz by Daniel G 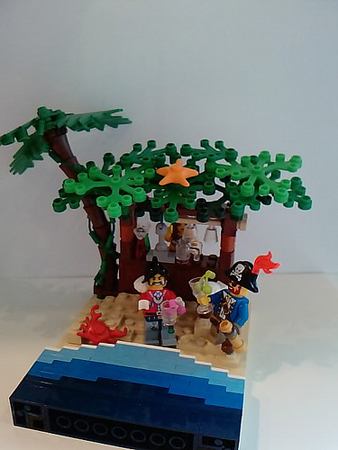 After many years of pillaging, the retired Captain Brickbeard and his arch nemesis Admiral Goldbuck find themselves meeting at the good ‘ole Beach Bar. They share stories and drink to their hearts content. No prizes for guessing why this charismatic bar is called the Star though!

Posted by Skipper24 in Pirates, PTVII, Land Based | Comments Off on PTV II: Star Beach Bar by Badboytje88

PTV II : Soldiers with no Work by Admiral Ron 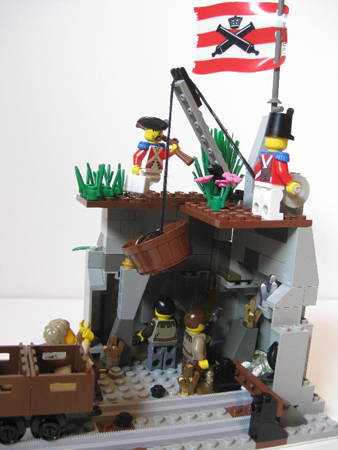 Down in the Redcoats mine resides a team of hard working miners. Every now and then the Red Coats on duty have to haul up the minerals dug out by their workers and get them sent off the the governor. However most of the time they are just slacking and lazing around above the toiling mine shaft. And what’s this? A skeleton of a Spaniard!How did he get down there?

Discuss Soldiers with no Work by Admiral Ron in the forums

Posted by Skipper24 in Soldiers (Blue Coats), PTVII, Land Based | Comments Off on PTV II : Soldiers with no Work by Admiral Ron

MOC : The Story of L’Archiveur by Ingmar

L’Archiveur a mighty ‘Man o’ War’. Once when navigating down the treacherous Eldorado River she was attacked and taken over by the French, could it pirates? Sporting a full 40 guns spread across the ships 3 decks. Ingmar’s attention to deatil has excelled for him on this ship. It features a consistent recognisable colour scheme to enjoy as well as plenty of rigging that swamp the masts and sails for realistic effect.  At it’s bow a majestic figure head spouts from a trail of golden guilding at her stern a ornately decorated aft section can be found. 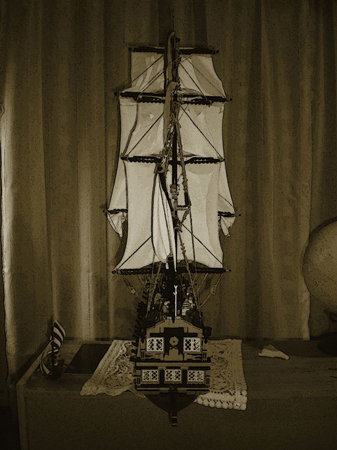 No matter how awesome this ship maybe the inspiration came from somewhere. In this instance it was out very own Classic-Pirates.com. Member Captain Green Hair also know as CGH recently created a wonderful tutorial showcasing the process of building a master class ship. It was a derivation of this tutorial that inspired Ingmar to create this marvellous vessel.

Discuss MOC : The Story of L’Archiveur by Ingmar in the forums

Posted by Skipper24 in Soldiers (Blue Coats), Ships | Comments Off on MOC : The Story of L’Archiveur by Ingmar

Yet again the fate of a poll has come to you. Today vote for your favourite Islander set from the 6 original well loved sets. Is your favourite Crocodile Cage, or perhaps Enchanted Island? Whatever your choice is go to the Classic-Pirates.com forum to submit it and let the world know.

Click to vote for your favourite LEGO@reg; Pirates Islander set in the Classic-pirates.com forum.

Posted by Skipper24 in Polls | Comments Off on Poll: Your favourite Lego Pirates Islander set

MOC: Malborghet, Vignette based on painting by Woody64 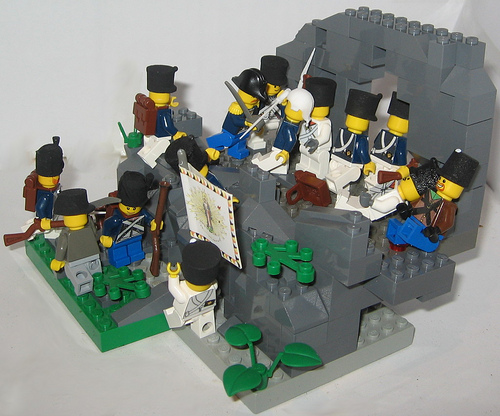 Woody64 has created for us this vignette based off the respective painting. Not only is this accurate top to bottom to the original painting piece of work but also historically, so all you history fans will be pleased. This was also a great opportunity for Woody to show off some of his excellent moulded minifig accessories such has the hats some of the troops are wearing. Woody has also gone to the effort of producing custom torso decals for his men providing a source of inspiration for all the customizers out there. It seems like this vignette has something for everyone!

Posted by Skipper24 in Soldiers (Blue Coats) Minifigs, Land Based, Vignettes | Comments Off on MOC: Malborghet, Vignette based on painting by Woody64