Often the best purchases we do, consist of lots of different bricks and parts. These can be quite cheap if you look at what you get!

For example this first lot, which includes a lot of sails and hull pieces!

We also found a LEGO 6274 Eldorado fort with a large quantity of additional bricks.

50 USD - An Eldorado with loads of parts!

Want more? Take a look at our eBay finds thread in the Pirates forum!

One of the best custom minifigures I recently encountered is this one from Michaelozzie: Napoleon Bonaparte, with his 1796 Brigadier-General costume, used into the 1796-1797 Italian Campaign which made his name and set him right upon the path towards glory!

Michaelozzie makes more high-quality decals for the Napoleonic Era, admire them over here!

Posted by Zorro in Torsos | Comments Off on Custom minifig: Napoleon Bonaparte (1796 – Italian Campaign) by Michaelozzie

One of our more devoted members, Brig. Brick, brings us a very easy tutorial on how to make an accordeon/concertina in only a few minutes time.

All you need are two flat tiles and some deskapparel like paper, scissors and glue!

Ready in 10 minutes or less!

Wikipedia: A concertina is a free-reed musical instrument, like the variousaccordions and the harmonica. It has a bellows and buttons typically on both ends of it. When pressed, the buttons travel in the same direction as the bellows, unlike accordion buttons which travel perpendicularly to it. Also, each button produces one note, while accordions typically can produce chords with a single button.

The concertina was developed in England and Germany, most likely independently. The English version was invented in 1829 by Sir Charles Wheatstone and a patent for an improved version was filed by him in 1844. The German version was announced in 1834 by Carl Friedrich Uhlig.

Posted by Zorro in Weapons & Accessories | Comments Off on Tutorial: custom Accordeon/Concertina, by Brig. Brick

Expand your army the fast way! Buy your LEGO Imperial Guards with 50 at a time!

Make an offer or Buy it now: 175 USD (multiples available)

Posted by Zorro in eBay Auctions | Comments Off on eBay finds September 7 2010: 2009 sets getting rarer!

Because we like to support our members who are running  projects for the community, I decided to write an item about Woody64’s latest custom items.

These are the items from his 20th mold, together with some already existing ones:

A Spontoon, a Pistol model 1806, a Baker Cavalry Rifle, the Hussar Hat…Woody makes it all!

If you want to see more of Woody’s items, here is a link to his shop.

Or what about these cheaper 10210 Imperial Flagships, just because there boxes are a bit dented?

Want more? Go to the eBay thread in the Pirates forum!

Poll: Which LEGO Sharks would you like to see in future Pirate Sets?

For the 2009 Pirate Theme the LEGO Group used the newer, larger sharks which first appeared in the Agent sets.

But how do Pirate LEGO fans feel about this change?

Cast your vote in the Pirate forum and tell us what you think!!!

Posted by Zorro in Polls | Comments Off on Poll: Which LEGO Sharks would you like to see in future Pirate Sets?

Some nice items on eBay just get lost because they do not use the correct keywords or miss some common pieces, like this 6286 Skulls Eye Schooner:

Or do you just need/want more crew for your ships? Build your army? Take a look at this CHEAP mixed blue- and redcoat soldier collection!

28,21 USD (can be combined with many other LEGO Pirate sets up for sale)

Want more? Look at our eBay finds thread in the Pirate forum!

Posted by Zorro in eBay Auctions | Comments Off on Summer Deals on eBay! August 17 2010

Armybuilder and MOC expert ImperialScouts had a stand at Brickworld 2010 and brought two MOCs with him. Due to the fact I was quite impressed by them, I could not resist making a small overview of them.

First we have one of  his masterpieces called The Battle of Willow’s Creek:

And the second one is called  Le Coup d’État du 18 Brumaire.

Click to find out more about this painting -based MOC by ImperialScouts!

Posted by Zorro in Armies, Soldiers (Blue Coats), Land Based | Comments Off on The Battle of Willow’s Creek and Le Coup d’Etat du 18 Brumaire by ImperialScouts

First of all let’s take a look at this wonderfull 6277 LEGO Imperial Trading Post of the guards!

Or what about this MISB 6296 Shipwreck Island? Very rare and wanted!

Wednesday, June 9th, 2010
The Tournament of Retribution II has begun and you still don’t own enough men and material to participate? Take a look at these cheap finds, starting with this nice 6265 Sabre Island.

And we finish with a blast! A vintage 6276 LEGO Eldorado Fortress, clearly overlooked!

Classic-Pirates.com’s very first real LEGO Armybuilding contest has come to an end. The quality of the entries submitted even surprised us, and now the time has come to select a winner plus a runner-up! 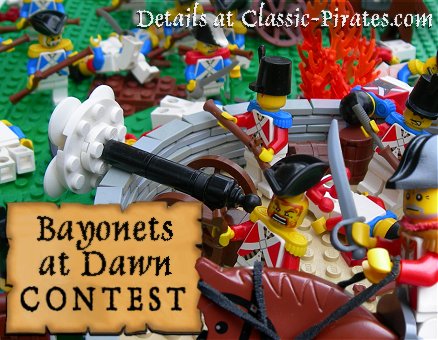 Now go vote for your favourite entries in the Pirate MOC forum!