Tournament of Retribution: The Winners! 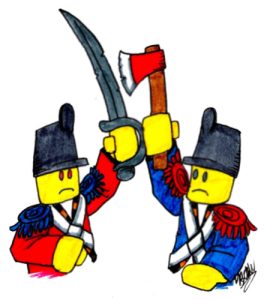 Now who is the winner after all?

As some of you may know, a couple of weeks ago the famous Tournament of Retribution ended. We’ve seen a lot of slaughter on both the Red and the Blue side, and we’ve seen even more fun!

A quick summary of the tournament: It all started with 4 Blue and 4 Red teams.
They had furious and humoristic battles no one had ever seen before!

The four winners were chosen by the judges and the winning teams went through to the next round!

Out of the Blue vs Green Thunder
Bloody Brilliant Redcoats vs. Big Bad Blue Bastards
The judges picked out the best teams, so there were two teams left!
This time the spectators had the opportunity to choose which Red and Blue member were the best of all!
The winners this time are:

Joey Lock from the Red side, and Captain Green Hair from the Blue side!

The organisator, Commodore Hornbricker donated two LEGO 6242 Soldiers’ Forts for the winners! A great prize!
Perhaps we’ll see another Tournament of Retribution in the future…