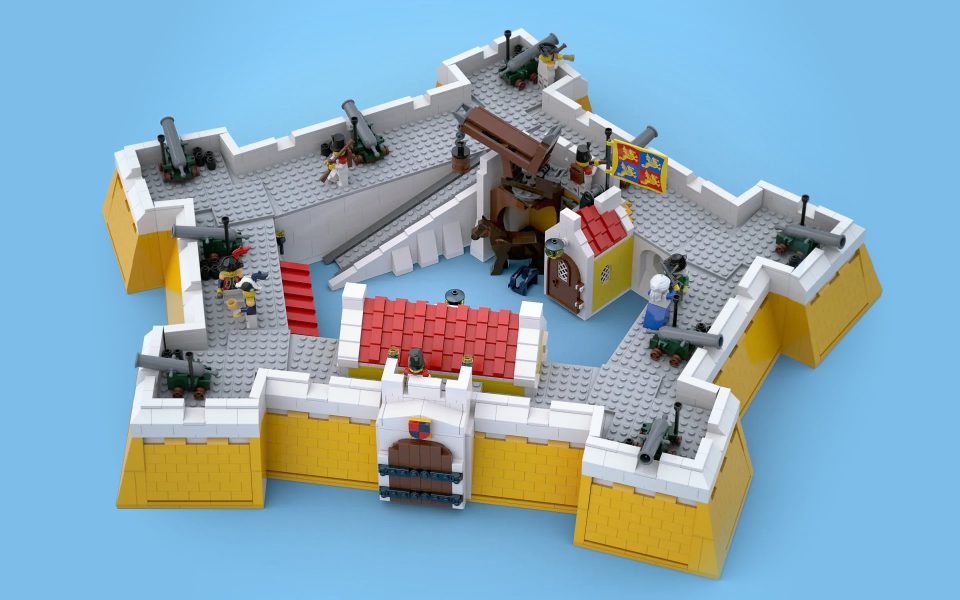 When it comes to fort building, the bastion fort problem has caused quite some trouble for AFOLs across the whole globe (the LEGO Caribbean for that matter). But fear not, for Lord James has submitted an outstanding fortress on LEGO Ideas, one that Green Coats, Red Coats, Blue Coats and Imperial Armada are scared of. It goes by the name of Crown Dominion Fortress. 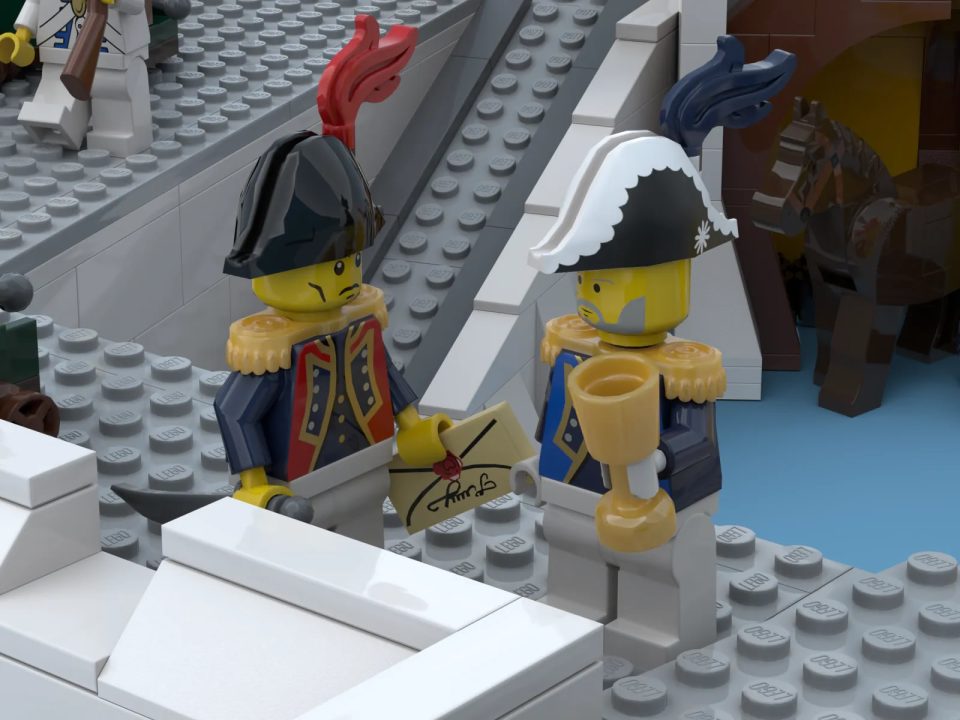 Officers seem to be discussing the newest wigs

It was the Age of Wigs. Mighty empires clashed on land and sea for dominance of the lucrative wig market. After years of stalemate, one ascendant force has gained a tenuous hold over the vital trade routes and constructed their impregnable citadel, Crown Dominion Fortress. The Viceroy and his trusted inner circle have been charged with a solemn duty: to protect the supply of luscious wigs that society desperately needs for work, leisure, and attracting mates. The very fate of the empire hangs in the balance. Yet storm clouds gather on the horizon; their fierce rivals, the Greencoats, will stop at nothing to seize all the wigs for themselves! Now you must choose who will prevail. Control the wig trade; control the world!

Now for the part that reads like a press release:
With its fun play features, innovative design, and historical realism, Crown Dominion Fortress is the perfect addition to any LEGO collection. The striking, angular appearance of this bastion fort is unlike any set that LEGO has ever produced, and the numerous callbacks to classic sets are certain to please. The nine minifigures in this prototype are based on the legendary never-released theme, Europa, which LEGO enthusiasts have been awaiting for decades.
This is more than just a display piece; the building experience is a rewarding challenge, and the structure, consisting of 10 movable sections, is durable and internally well-supported, so younger children can play for hours while the fort remains in good working order. The crane can be positioned to hoist barrels of munitions to the upper levels as well as to pull cannons up the ramp in order to defend the base against Greencoats or any other adversaries imaginable. The fort also includes two jail cells and ample storage areas for stockpiling wigs and other treasures. The roof of the gatehouse can be removed easily to reveal the viceroy’s bureau, containing a handsome pedestal desk and chair, bookshelves, maps, light fixtures, and more.

This prototype contains 2,992 elements (Studio 2.0), around a thousand of which are 1×2 tiles or smaller, so the total volume of the set is reasonable relative to the part count. Many large supporting bricks can be replaced with panels of similar dimensions to reduce the mass without losing any stability. The colors (yellow, white, and bright light orange) are reminiscent of classic LEGO sets as well as real-life forts such as Christiansværn (Christiansted, US Virgin Islands) and Forte de São Tiago (Funchal, Madeira, Portugal). Other historic forts that influenced the design of Crown Dominion Fortress include Castillo de San Marcos (St. Augustine, Florida, US) and Fort Zeelandia (Paramaribo, Suriname).
The foundation is a symmetrical irregular pentagon. The interior sides have lengths of 18 studs (x2), 26 studs (x2), and 31 studs (x1). To save on the part count for the final product, each side can be reduced by the same length and still maintain a uniform, integrated appearance. The five interior angles are each 108 degrees, leaving corner gaps of only 0.25 millimeters or less. The sides of the bastions align with the flanks at 9 degrees from a straight line (171 degrees) to form a consistent outer wall. In the prototype, these sections are not connected, although they can be easily adjoined by 1×2 hinge bricks at the level just below the row of white slopes. Alternatively, to maintain modularity, the sections can be connected internally using holders and sticks or – better yet – with magnets.

As you can see, this fortress is such a cleverly complex build that Captain Redbeard has no chance of getting in. The Classic Pirates fortress colour scheme is also in place with yellow and white accents all around. 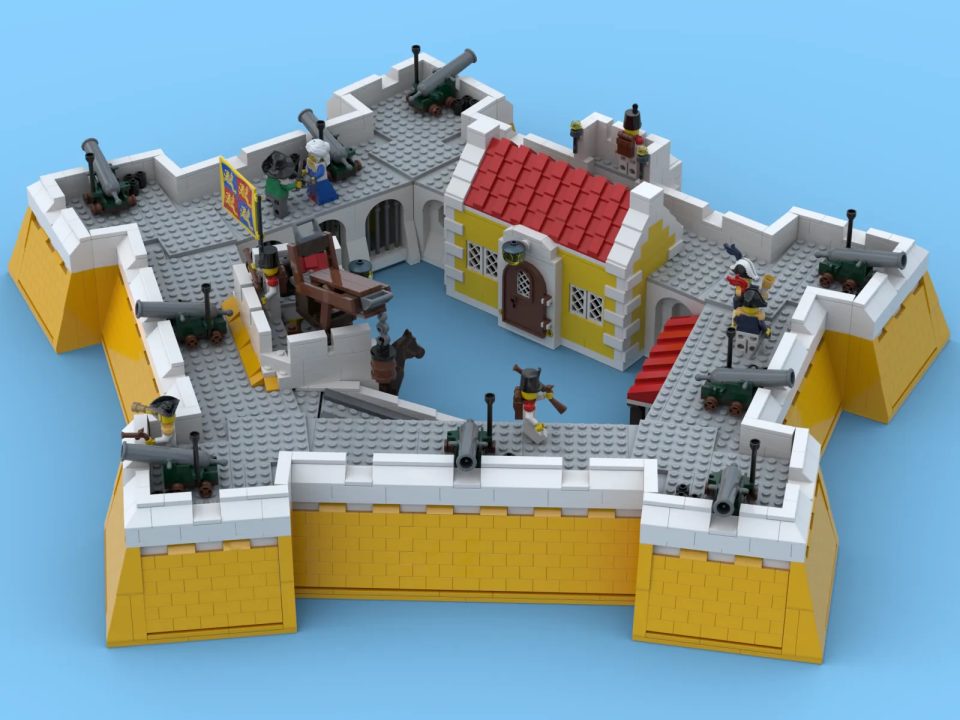 Coming in from the rear 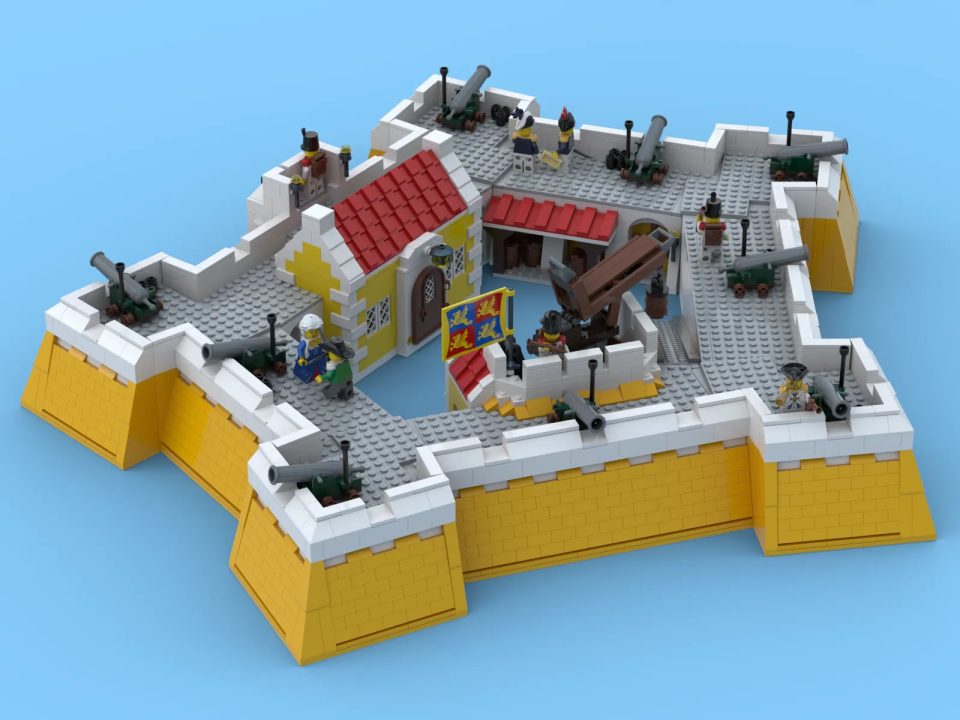 Or is this the rear? Which way round does thing go anyway? 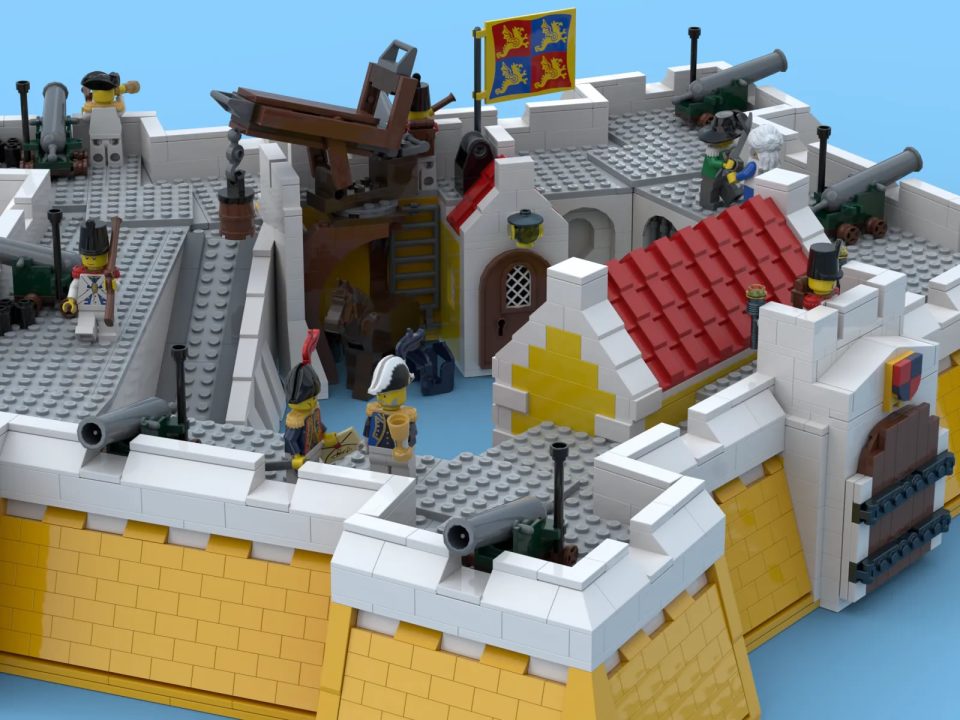 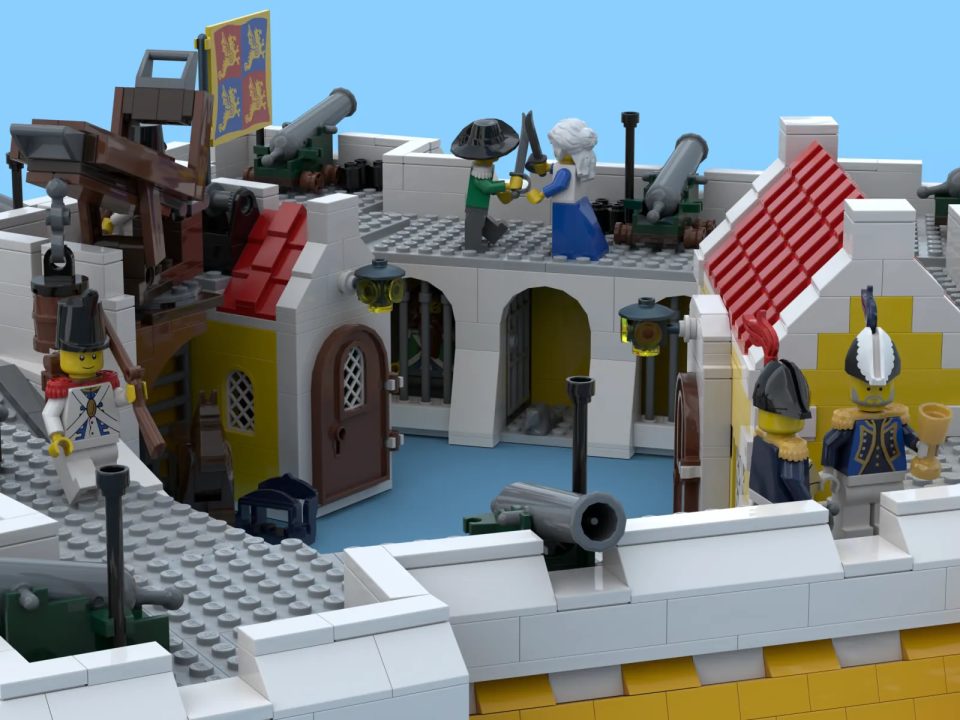 The officers stand round while dueling takes place right behind them 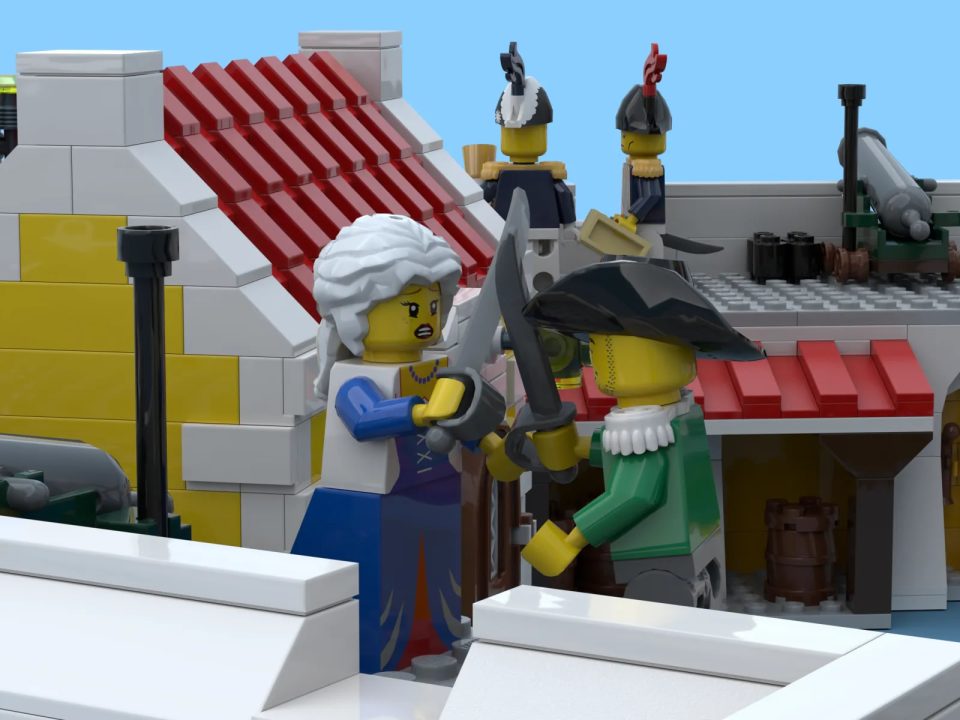 This is how they’re settling their divorce 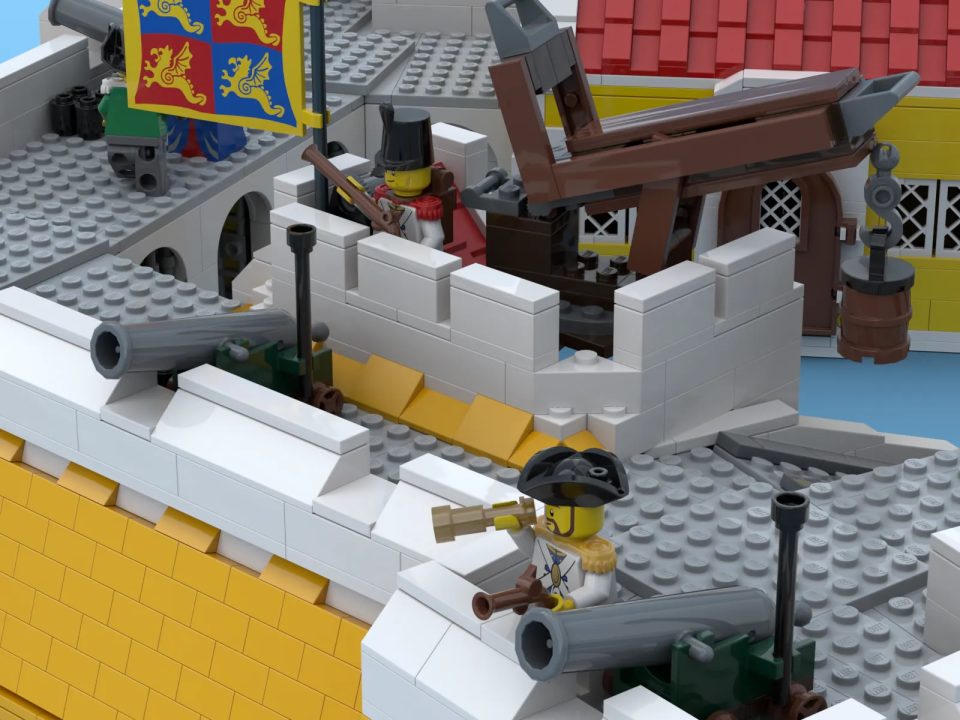 The cannons are loaded! Hey, that flag looks familiar from somewhere…

What is a Bastion?

It’s a type of fortress which was common in the Caribbean, built most commonly by the Spanish, yet has been rarely seen in LEGO form. So that makes Crown Dominion Fortress exciting, is it’s historically based yet something we’ve never seen released as an official LEGO Pirates set. 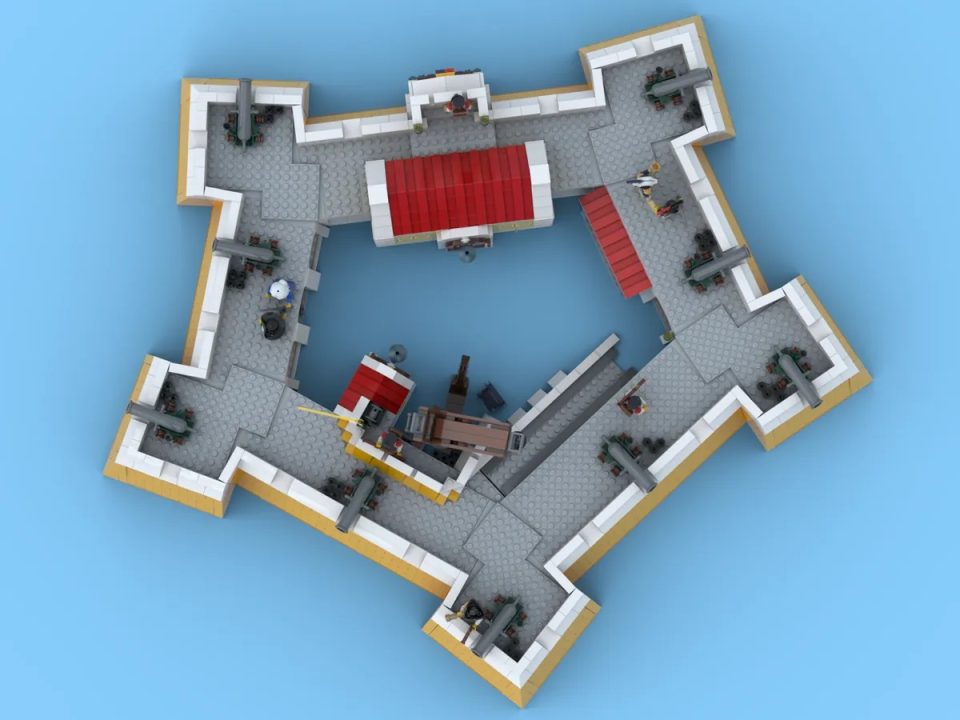 From above, fortress appears as a beautiful star

A bastion (also known as a bulwark) is a structure projecting outward from the curtain wall of a fortification (in the image above the curtain wall be the wall furthest from us), most commonly angular in shape and positioned at the corners of the fort. The fully developed bastion consists of two faces and two flanks, with fire from the flanks being able to protect the curtain wall and the adjacent bastions. Compared with the medieval fortified towers they succeeded, bastion fortifications offered greater passive resistance and more scope for ranged defence as gunpowder artillery became more common. In terms of military architecture, the bastion is one element in the style of fortification which became dominant from the mid 16th to mid 19th centuries.

And now we must examine the most important aspect of any fortress – the wig storage facility. 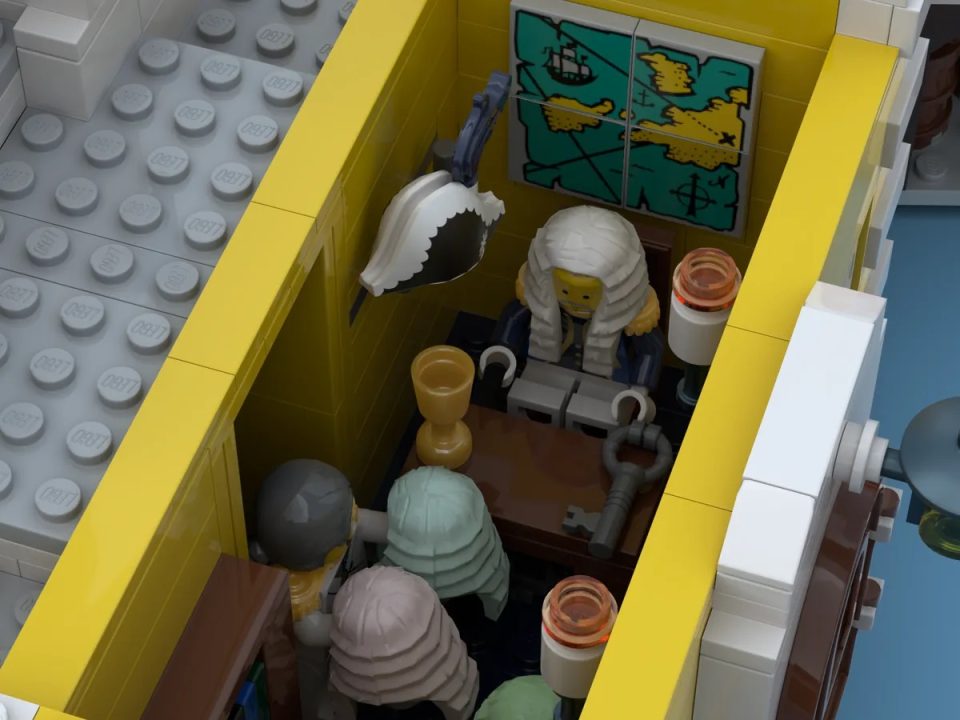 Look at that colour variety! 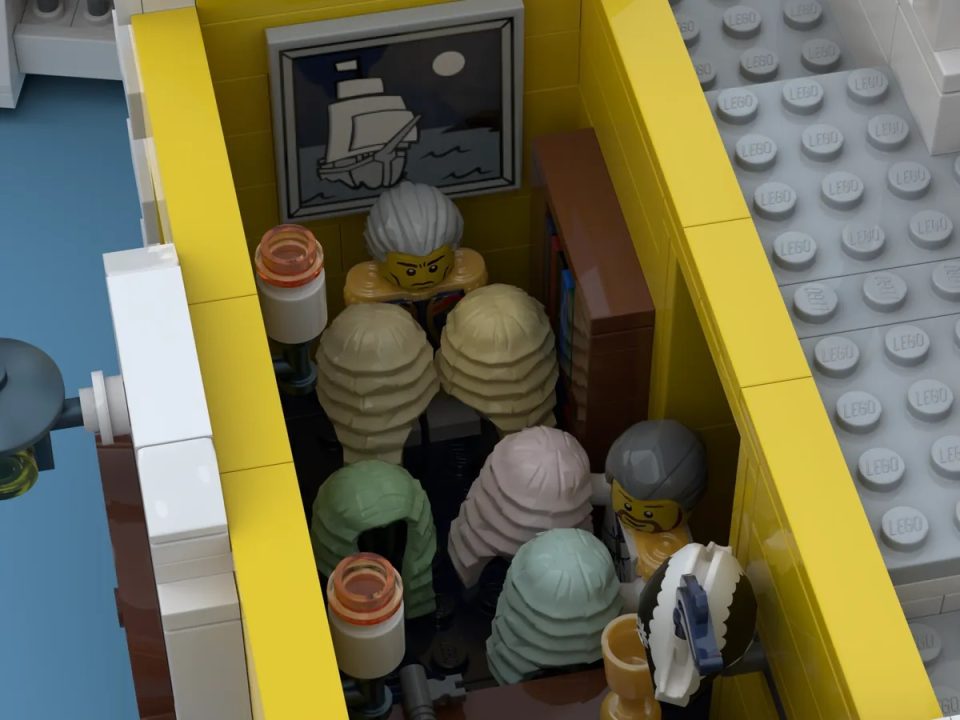 This model is a perfect start for anyone’s wig collection!

The project has been active on LEGO Ideas since December 28, 2020 and 10 months later only has only attracted 703 supporters. I know, I know, you might be thinking – how come it’s been almost a year and is yet to garner 10k votes? No one knows the answer to that question, but what we do know is it needs more support. So, get out there and support this eighth world wonder to protect us from Green Coats and the other enemies who are lurking out there! 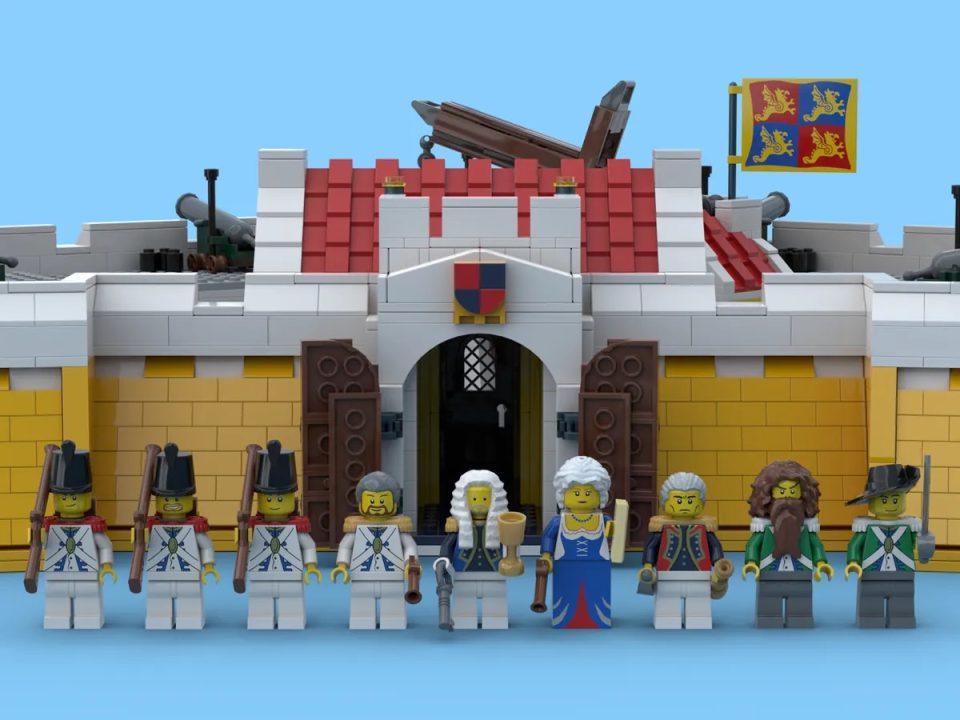 All the appropriate minifigures. Even some Green Coats have snuck in! 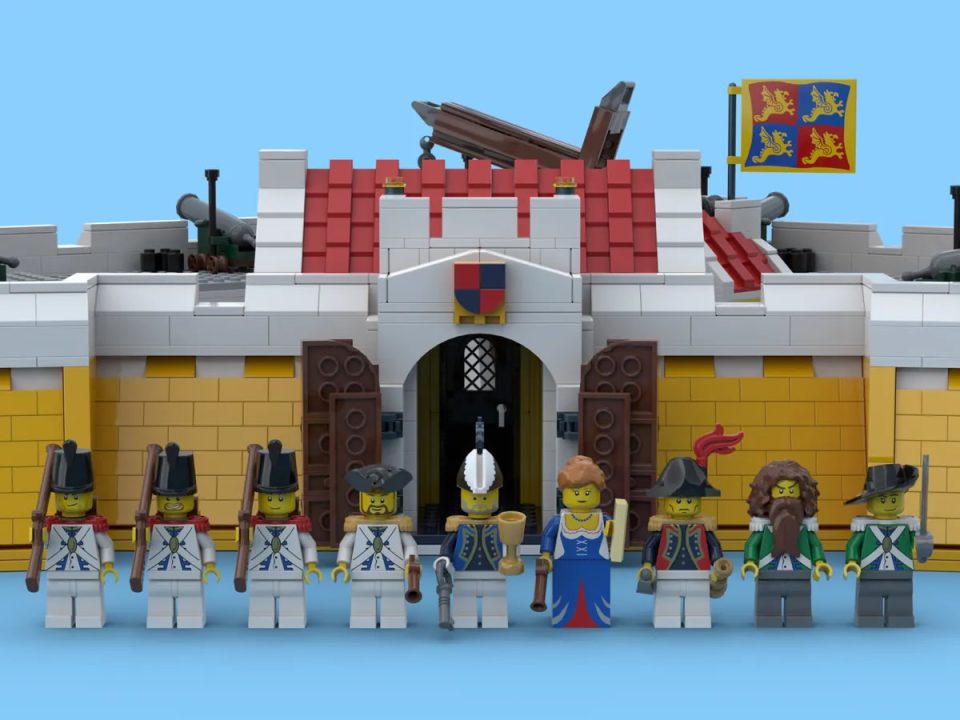 And here they are again wearing hats

When it comes to MOC building, Lord James isn’t the most active builder on Pirate MOCs subforum but when he does build, he builds the most wonderous things with quite some amazing building techniques.

Lord James has a LEGO Ideas profile on which he has submitted this very same project, also a YouTube channel on which you can see this amazing model’s speedbuild.

If ye have all of a sudden developed thirst for more awesome LEGO Pirate MOCs, then do consider visiting Pirate MOCs subforum and LEGO Pirates Forum!