Pirates of the Caribbean

Our next BIG contest is almost here!  Check out the Prize Pool: 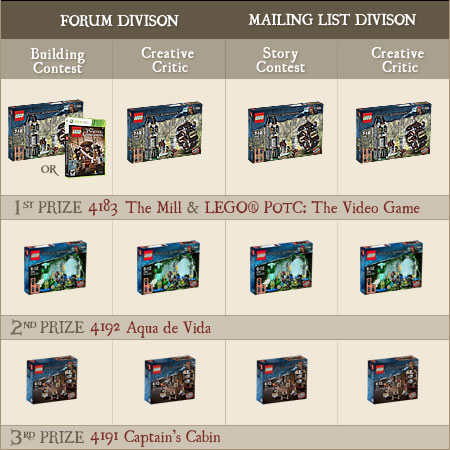 There will be two divisions each with its own Creative Critic awards.

Build a LEGO® MOC depicting a scene or vessel from any of the Pirates of the Caribbean movies.

Entries will be submitted in the LEGO Pirates MOC Sub-forum so you will need a valid Eurobricks account to enter.

To write a short story (300 words or less) about classic LEGO® Pirates encountering the characters from the Pirates of the Caribbean franchise.

Each division will also have Creative Critic awards so be sure to leave your best feedback.

Disney Interactive studios have provided us with an XBOX 360 copy of LEGO® Pirates of the Carribean: the Video Game and the LEGO® Group has provided a cache of sets!

When Does It Start?

Ask away in the Pirates of the Caribbean Contest thread.

More Pirates of the Caribbean