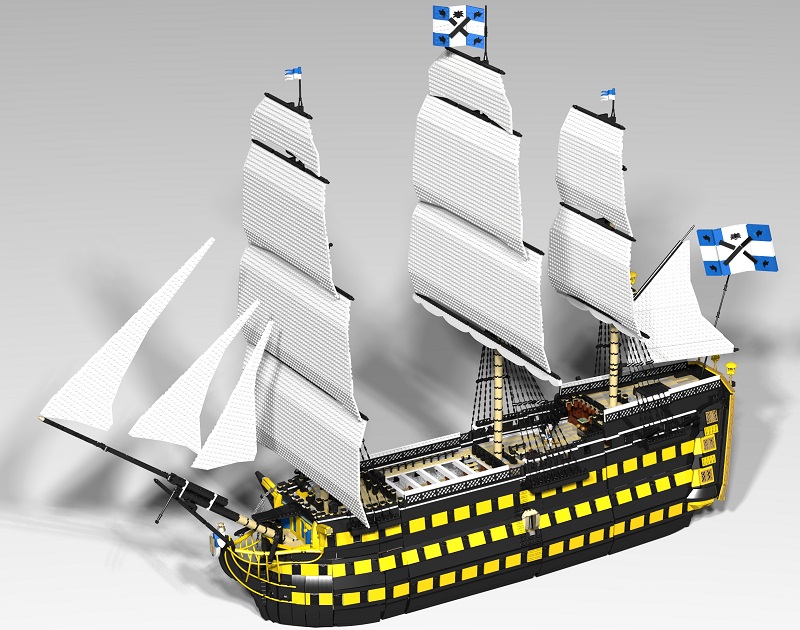 LDD ship builder extraordinaire Kolonialbeamter shows us his latest masterpiece! Kolonialbeamter’s 120-gun Ship of the Line has a vast interior, an impressive bow, and a gorgeous stern! This massive beauty should for sure scare away any redcoats within its sight!

I’m proud to present to you my biggest project so far,

the 120-gun Ship of the Line Sans Pareil.

Construction began in January 2012, even before that of Vengeur, and I had finished her basic looks way before I finished any of my prefab hull ships.

I started out in real bricks, but every budget has limits, so LDD had to do the rest.

It did, and here she floats!

Thanks for watching, Comments & Criticism is always welcome!

If you have questions, please ask!

Come over to the LEGO Pirates Forum, see the story behind the ship, and then comment on the glorious Sans Pareil! She is a modular build, as you can see here. And can hold a full interior. You can’t really see it in this picture, but using some string the ship’s wheel can actually be connected to the tiller, creating a working rudder (at least I hope so ).

Furthermore, all the (brown) walls in the officers’ areas are made to be removed to create a realistic battle environment.

The key elements to her structure are these (old style) hinges. They are – unlike the new ones – completely flat and have hollow studs, which means they can be placed in half-stud distances, great for shaping, especially for that transition between the middle and upper gundeck.

She’s been my main project for a long time. However, she has always felt strange to me in a way, never was a true love-child. I can’t really put my finger on it, maybe it’s due to her obscure scale. Her waterline measures 116 studs in length (equaling around 90cm), length overall is 180 studs (1,40m), the lower gundeck is 30 studs wide. I guess that’s roughly 2/3 minifig scale. So she doesn’t qualify for that. But neither does she qualify for minifig illusion scale. I wouldn’t even put her in the same category as Dread Pirate Wesley’s excellent HMS Persephone. The relative height of her hull does bother me. But maybe it’s mostly the SNOT technique I used for the hull but never really grew fond of, because it doesn’t allow for adjustments nor to be fiddled around with… At least in LDD it is extremely frustrating … Like for example I know the waterline clearly needs reworking, she’s got to be lower and should enter the water at an angle of almost 90°. But in order to achieve this, I would have to change the entire base structure, not to mention all the hinges… It’d be an unbelievably time consuming act. I don’t know if I’ll ever update her.

Anyway, she is a Behemoth, a monstrosity in some sense. She will always be a unique shape in my fleet, forever ‘Sans Pareil’. 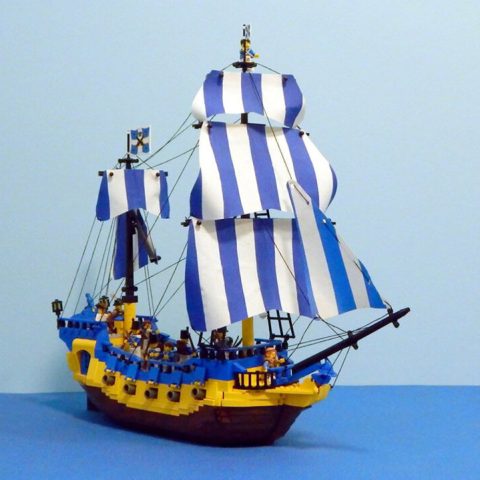 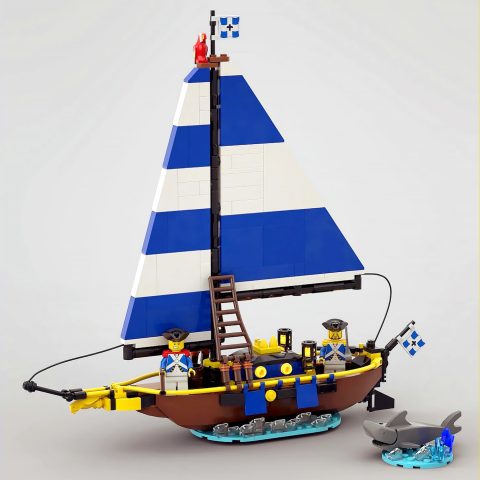