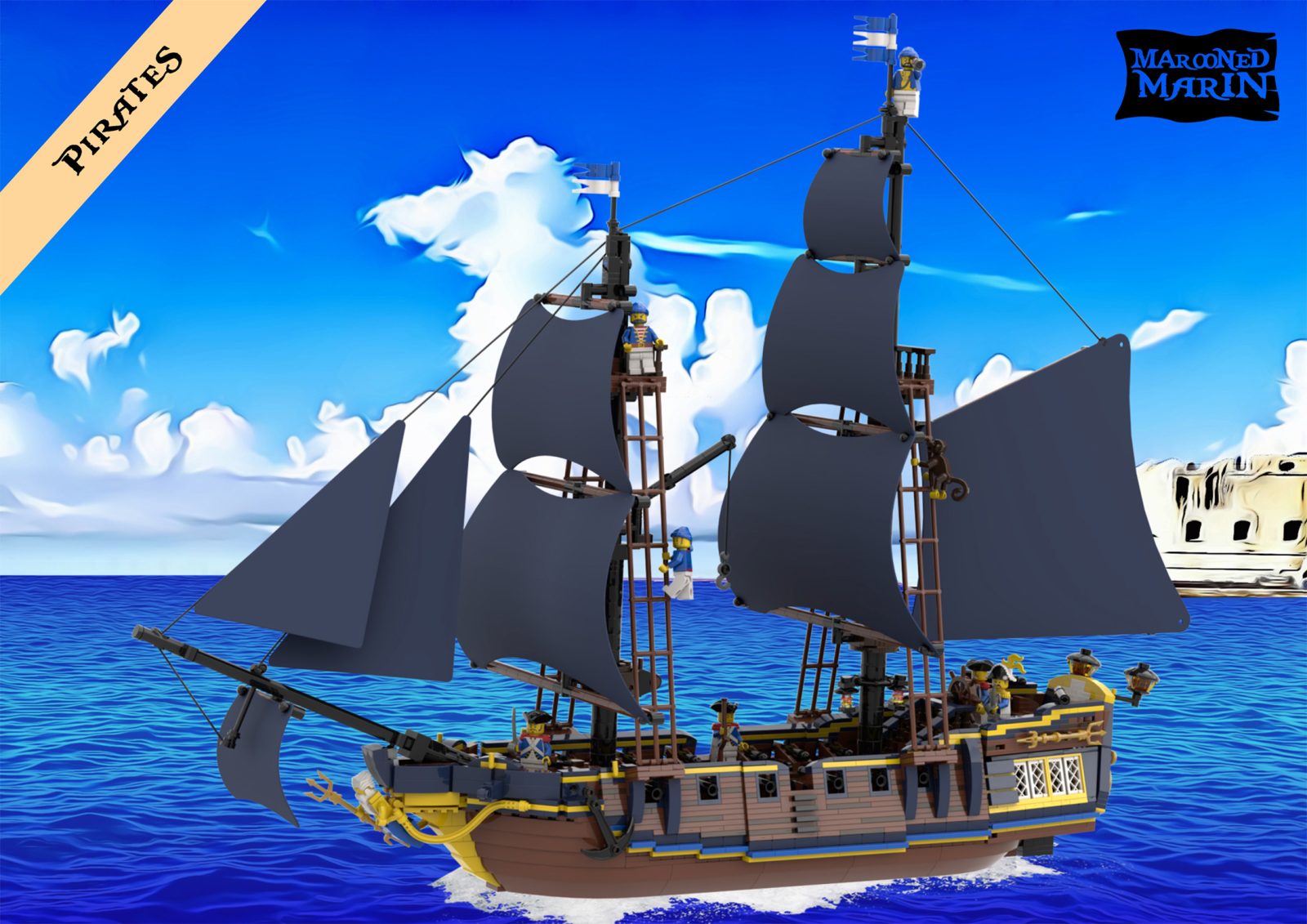 Many of Classic Pirates bloggers are also talented builders, so when they’re not stretched to meet their blogging deadlines, they often pursue MOCing in their spare time.

Our most prolific blogger and Shipyard Master, Marooned Marin is no exception! We’ve previously covered his Warty Crab, a sleek, compact craft that cuts through fog like a bullet through thy enemy, but this time we shall be exploring his latest, more ambitious endeavour…

The Triton, a blue coat Soldier brig that packs a punch, and leaves 6276 Caribbean Clipper dead in the water!  But can it measure up to 2009‘s red coat driven 10200 Imperial Flagship?

TRITON is a war brig with two masts, both square-rigged, equipped with 12 cannons and two lighter, but deadly accurate, swivel guns. She is known for her speed and exceptional manoeuvrability, so much that a skilled captain (even Lieutenant de Martinet) could turn her around almost on the spot. No wonder why she quickly became Governor Broadside’s prized ship and principal threat to all pirates still daring to plunder the Brick Seas.

With Captain Redbeard still missing and presumed dead (while actually marooned on the Barracuda Bay), remaining scattered pirates are facing their darkest hour in their battle for independence from the Imperial rule. They need to find a way to deal with TRITON, or perish! 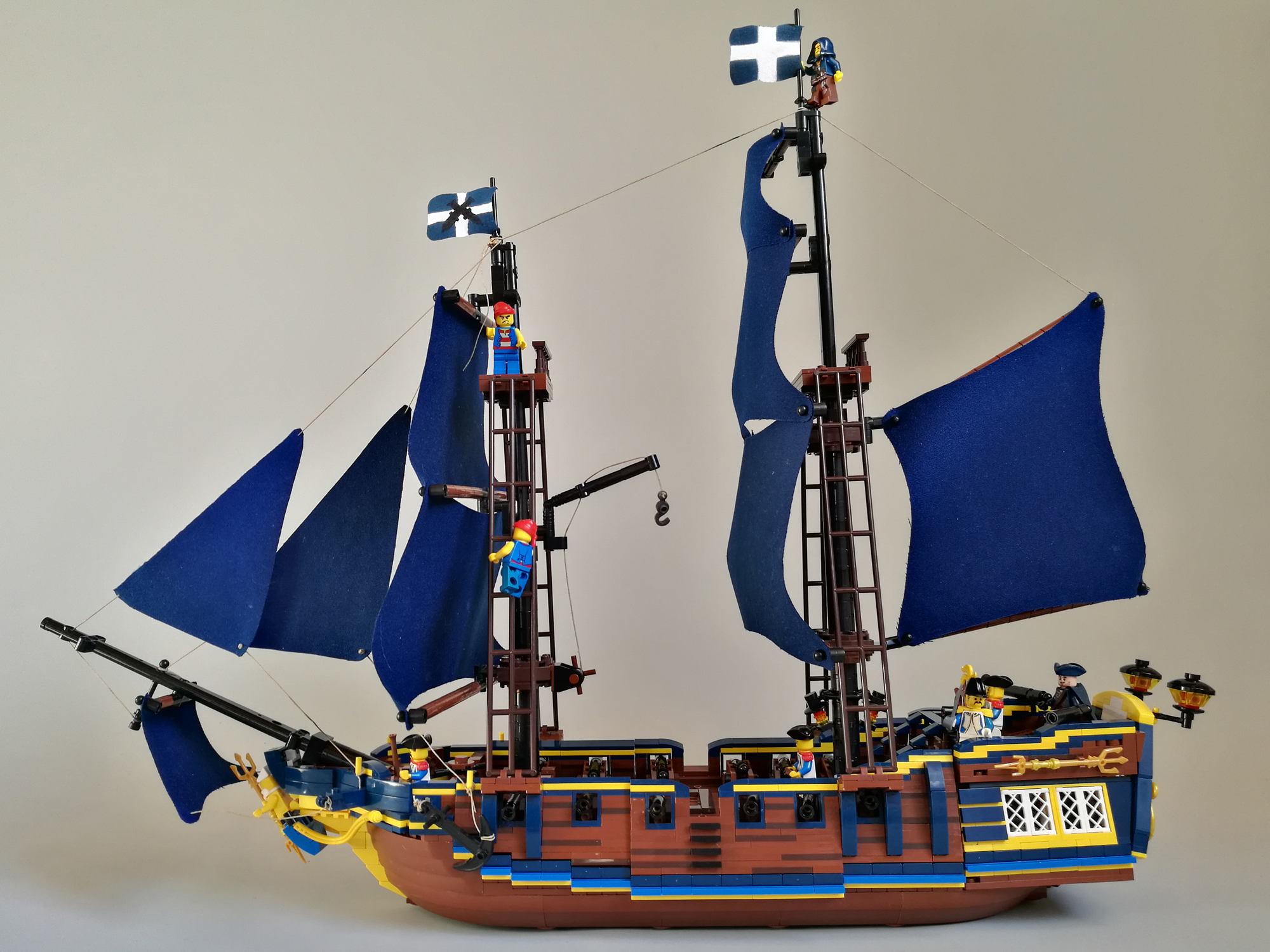 The Triton sailing into battle with 12 guns at the ready…

The Triton was initially designed in Studio.io before being built and tested using physical LEGO elements.  Throughout that process the ship laboriously underwent several major revisions to circumvent various structural challenges. After a year of grueling frustration, Marin emerged victorious and the Triton rolled in the harbour for the entire world to awe and marvel.

The design is sturdy as they come, with both masts reinforced by long Technic axles and affixed by rigging of the masts.

Marin insists “the ship’s stern with all the curves and slopes is tough as a nail!” – although we’d like to see some video evidence in the form a drop test… 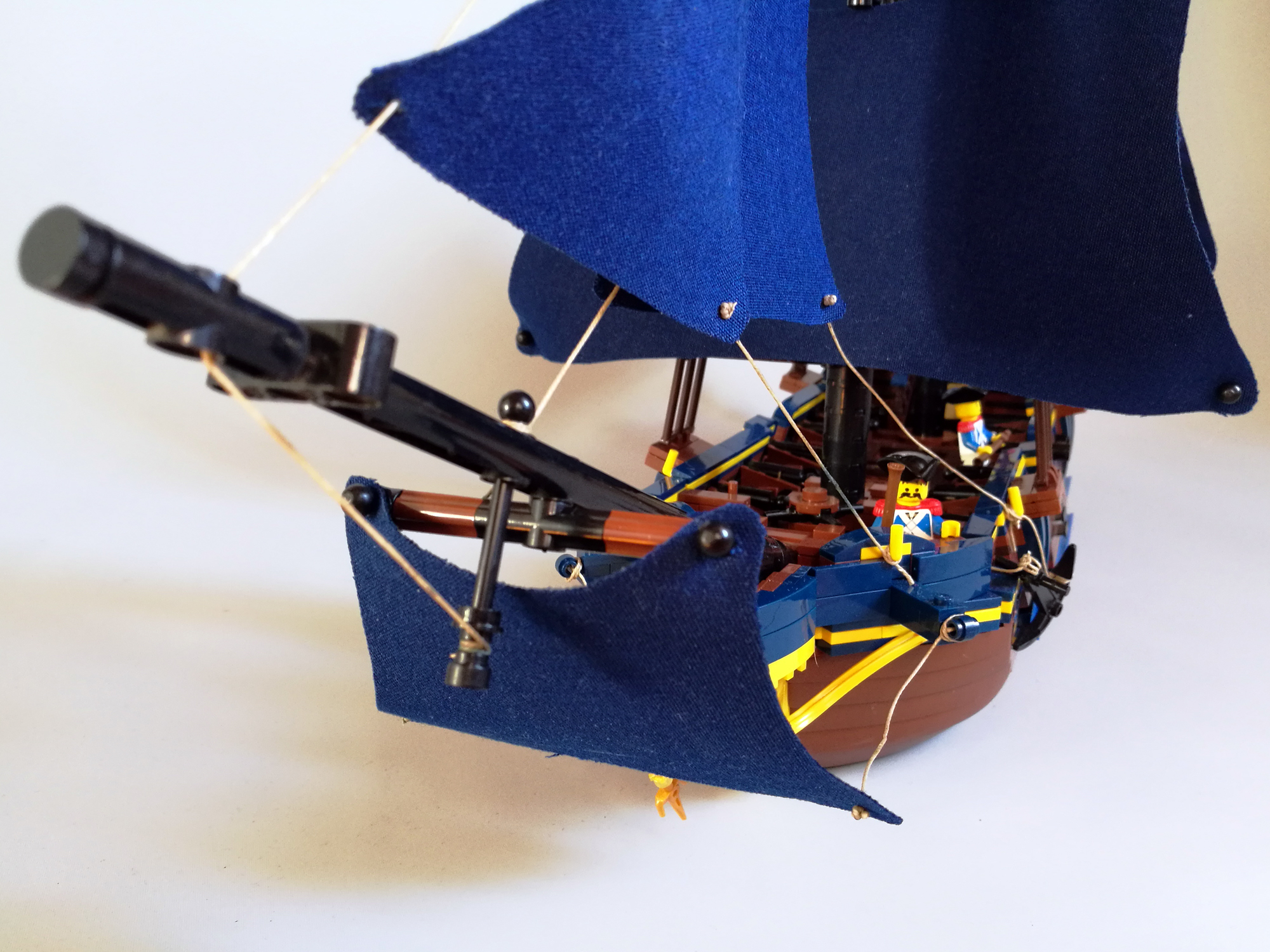 Look at that powerful bowsprit, right in yer face! 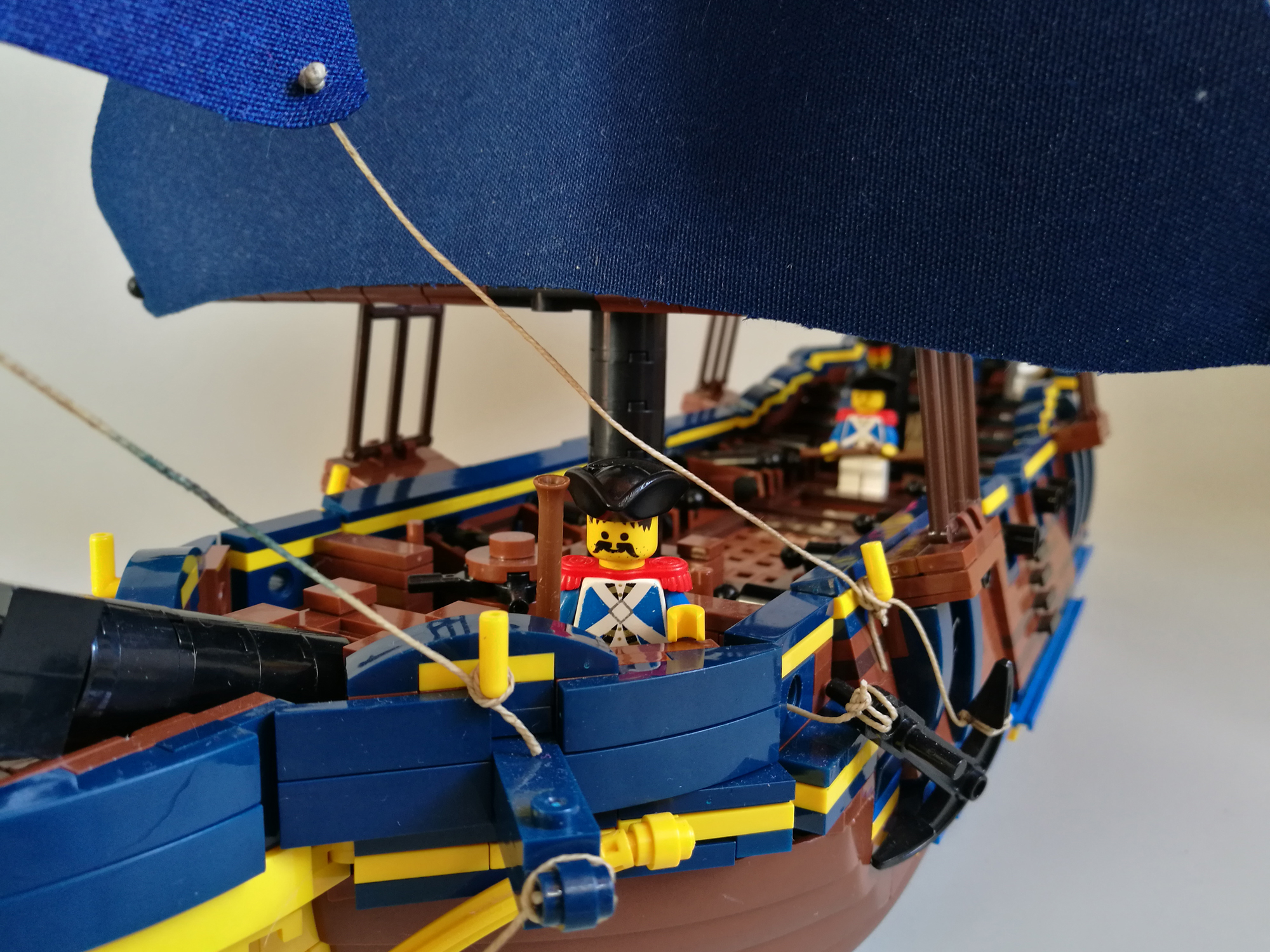 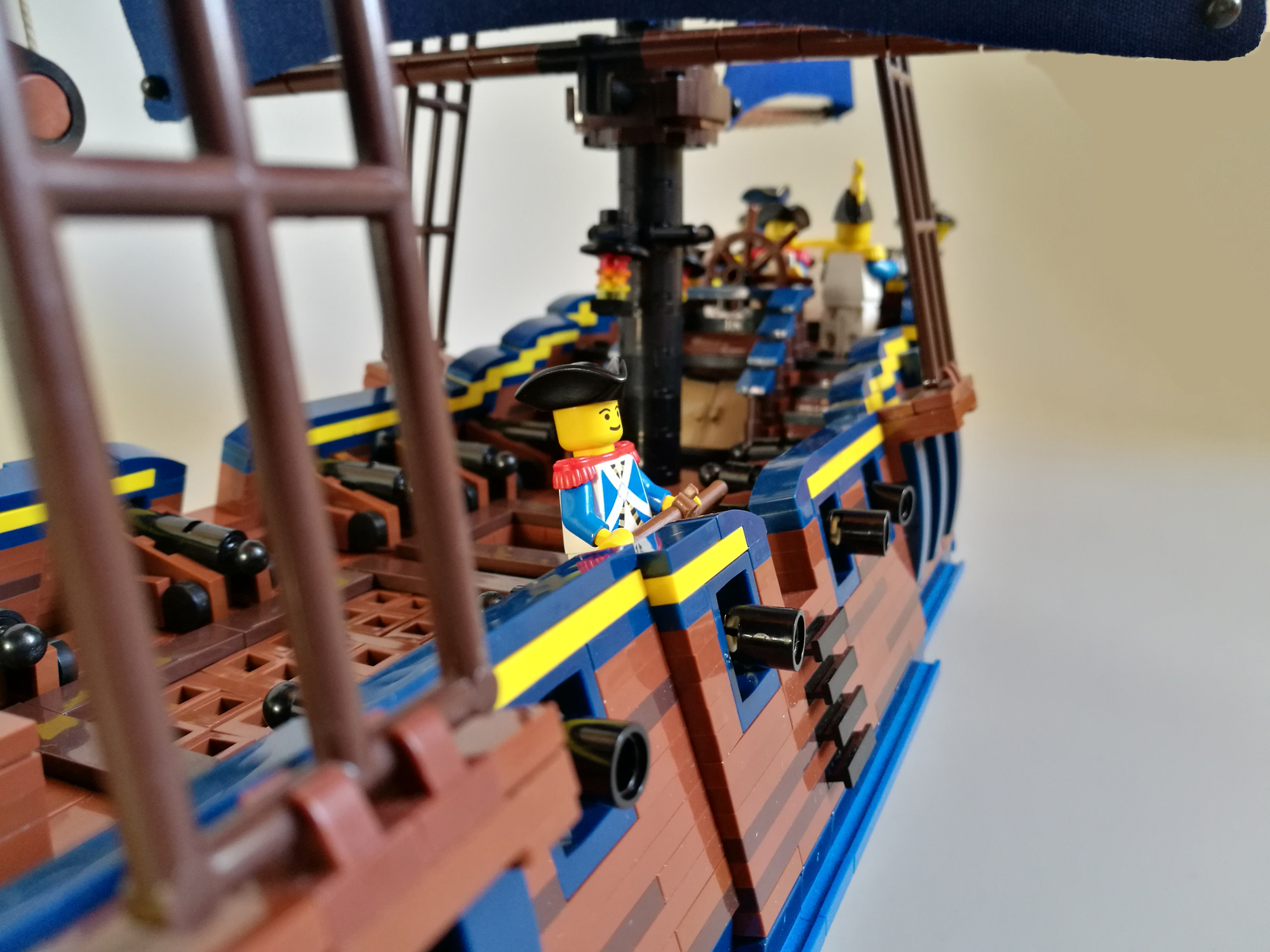 Guns at the ready – the Triton’s broadside is broad! 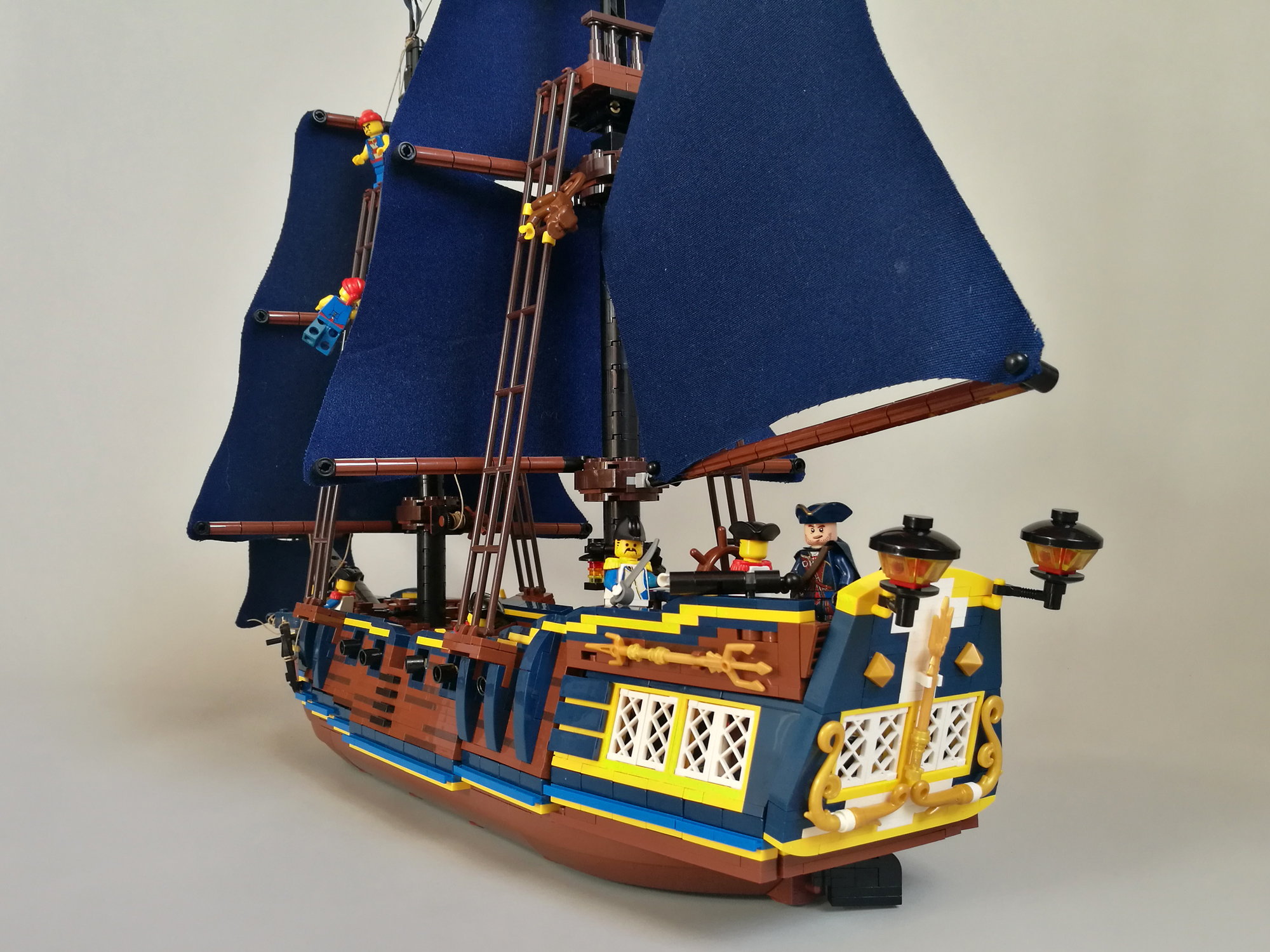 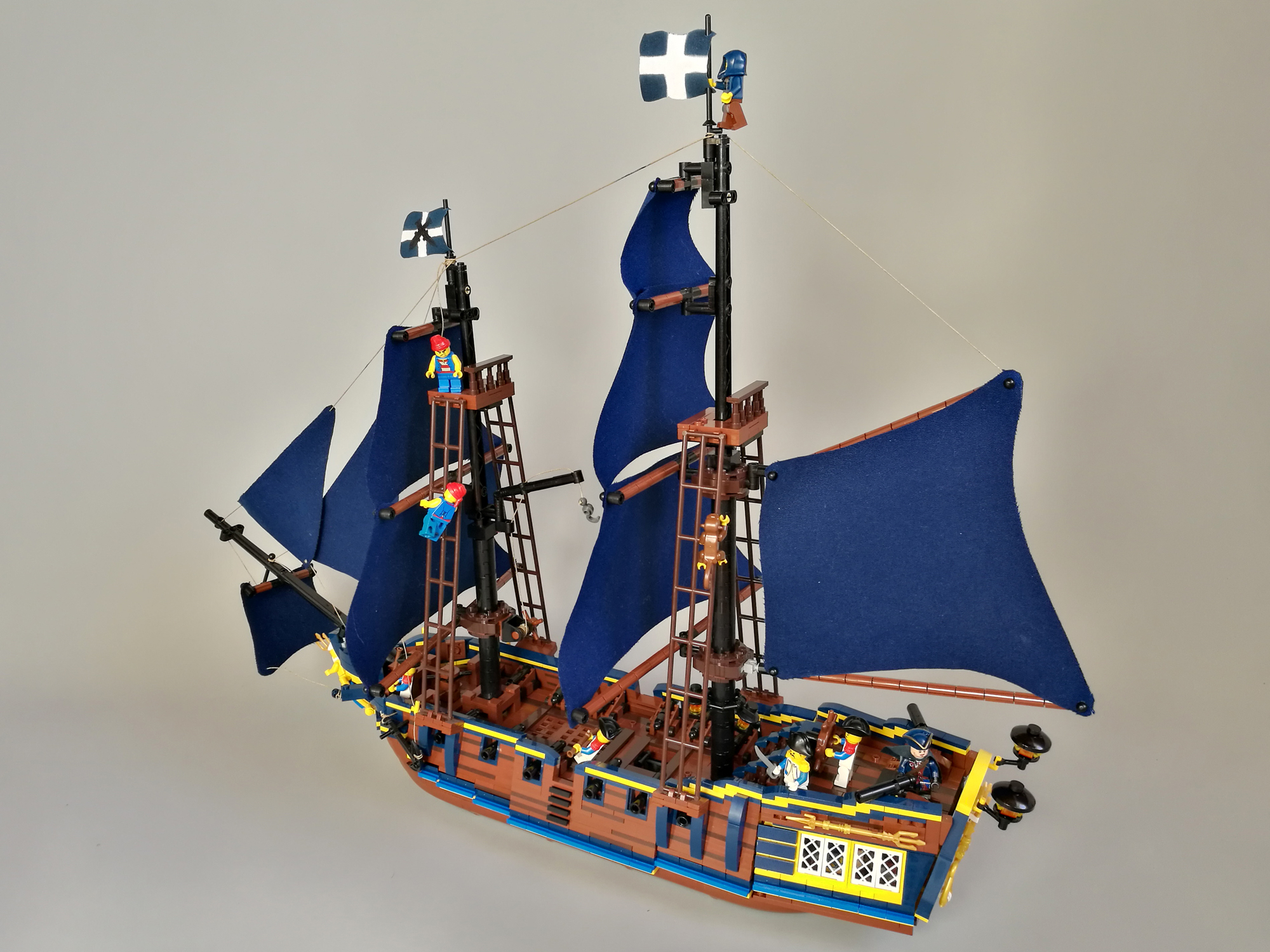 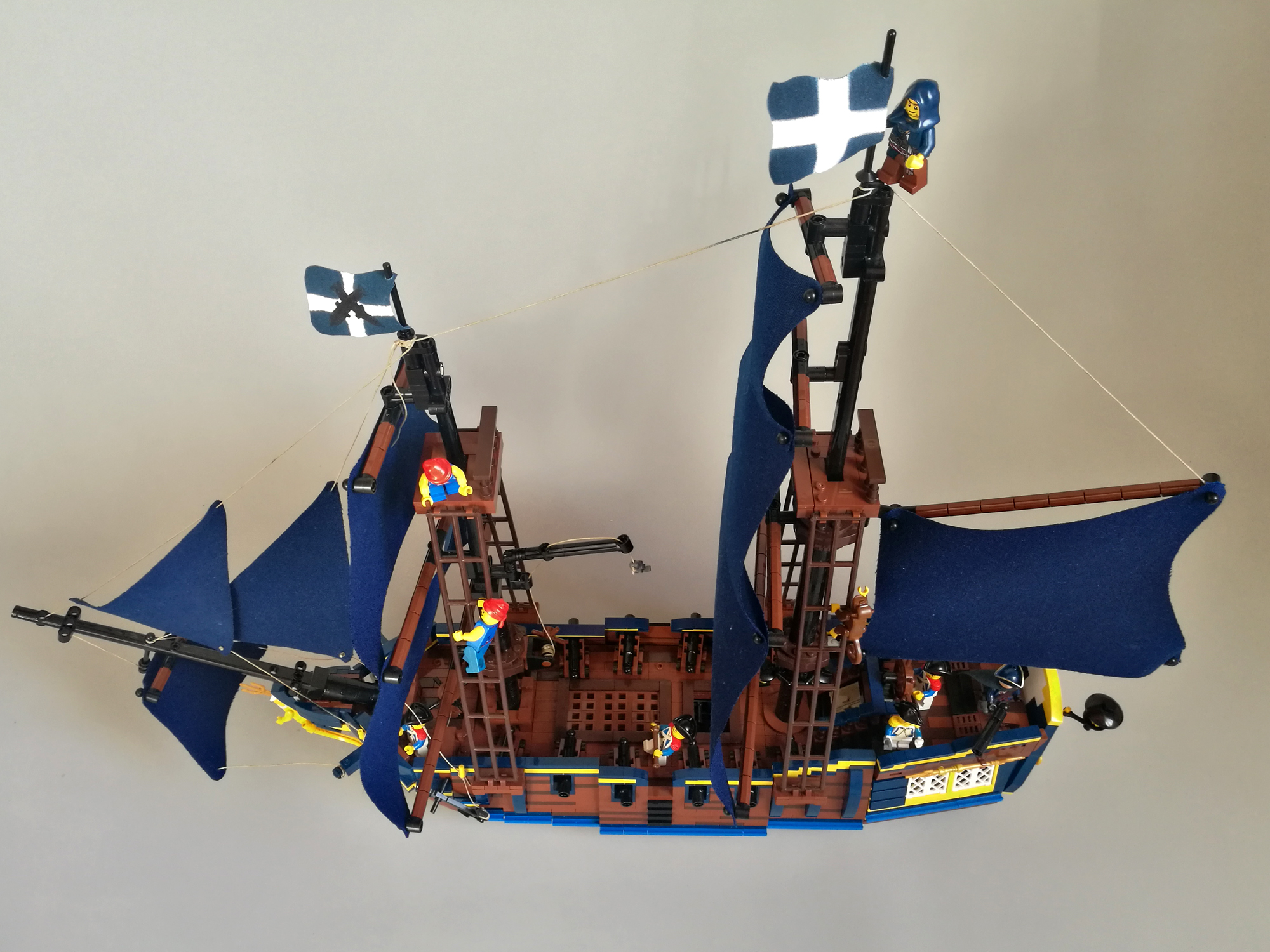 Don’t have blue coat Soldier flags? No problem – you can just draw them yourself! 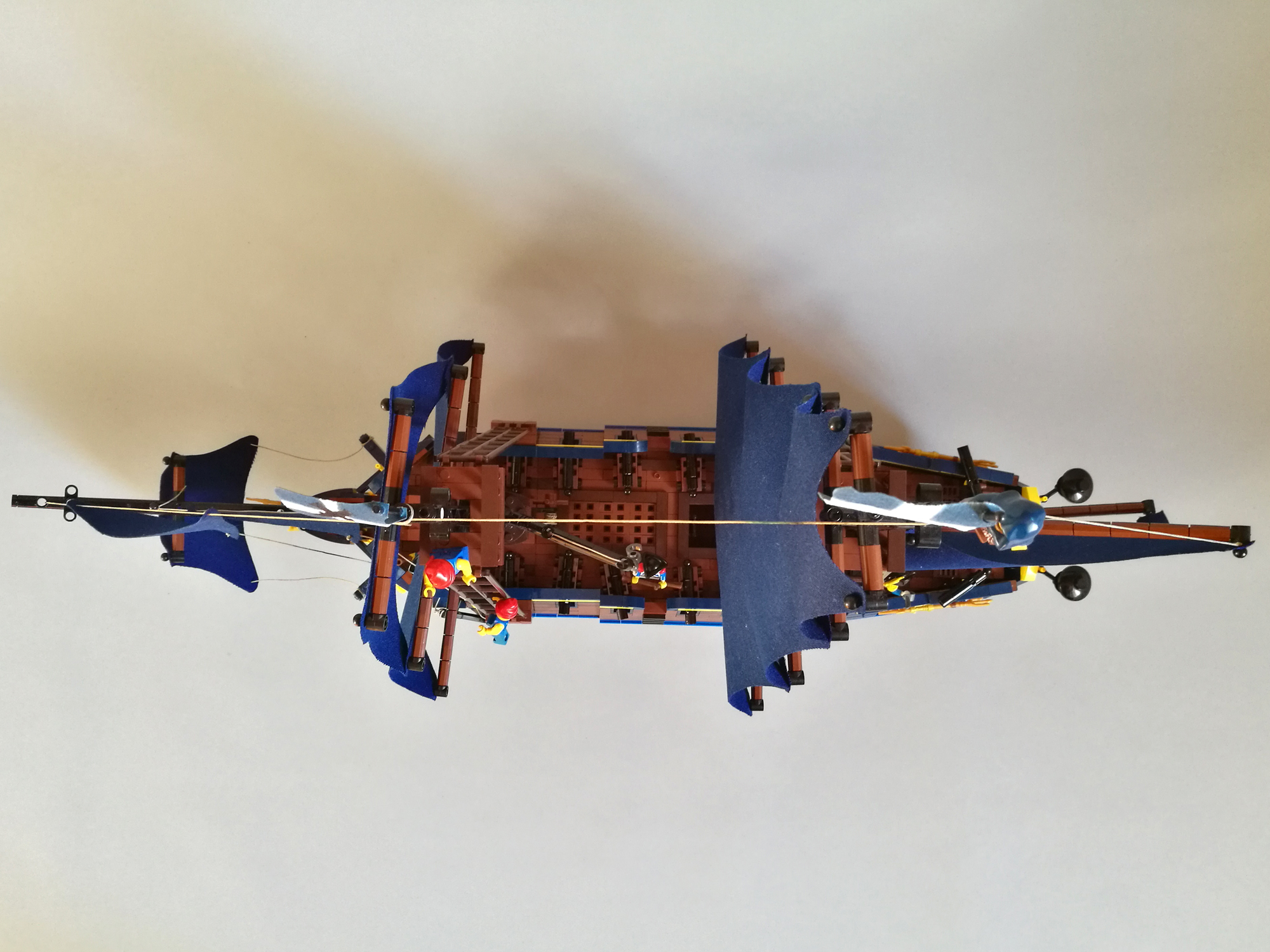 Here’s Sea Eagle’s view of the deck – bombs away! 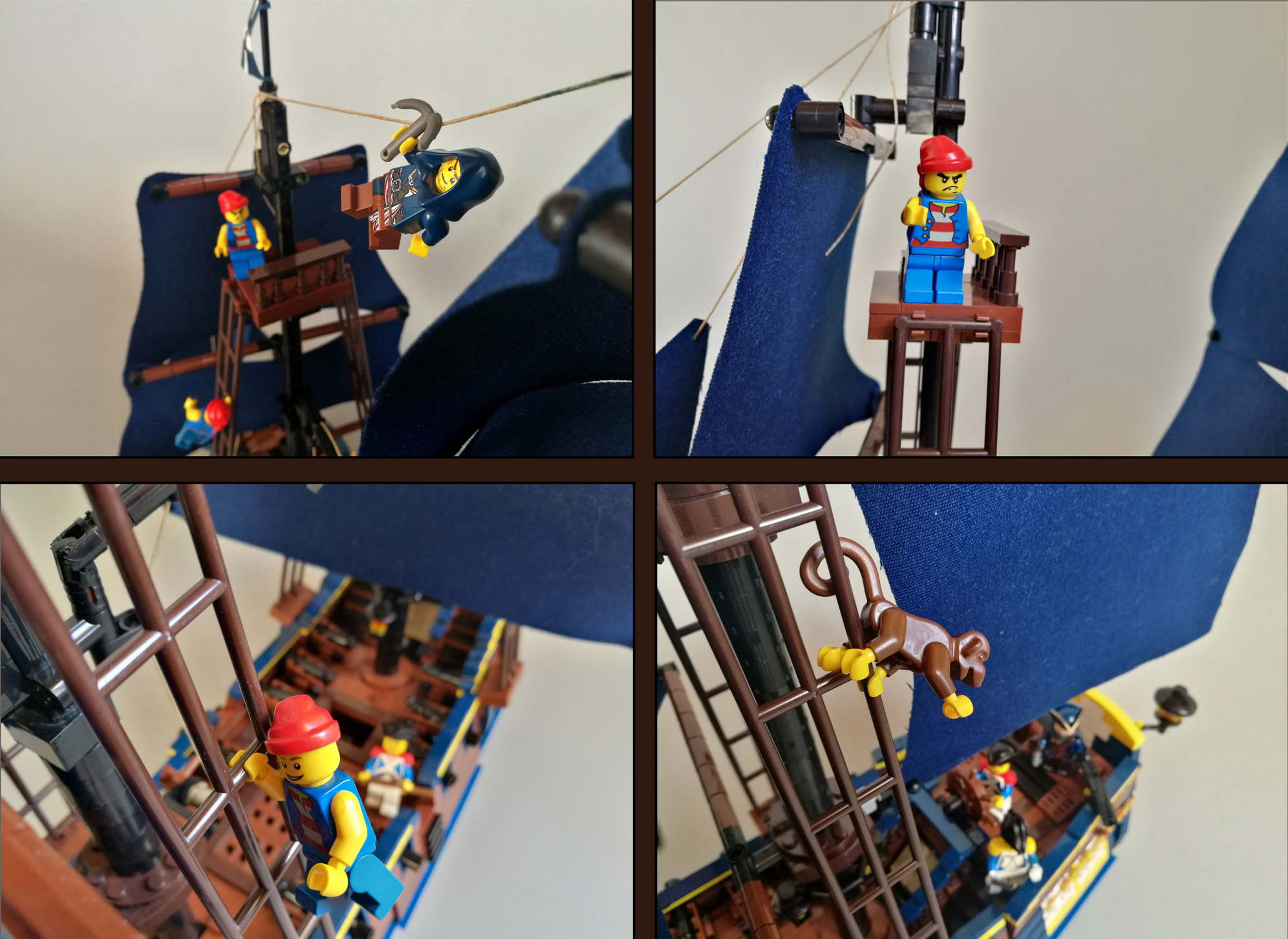 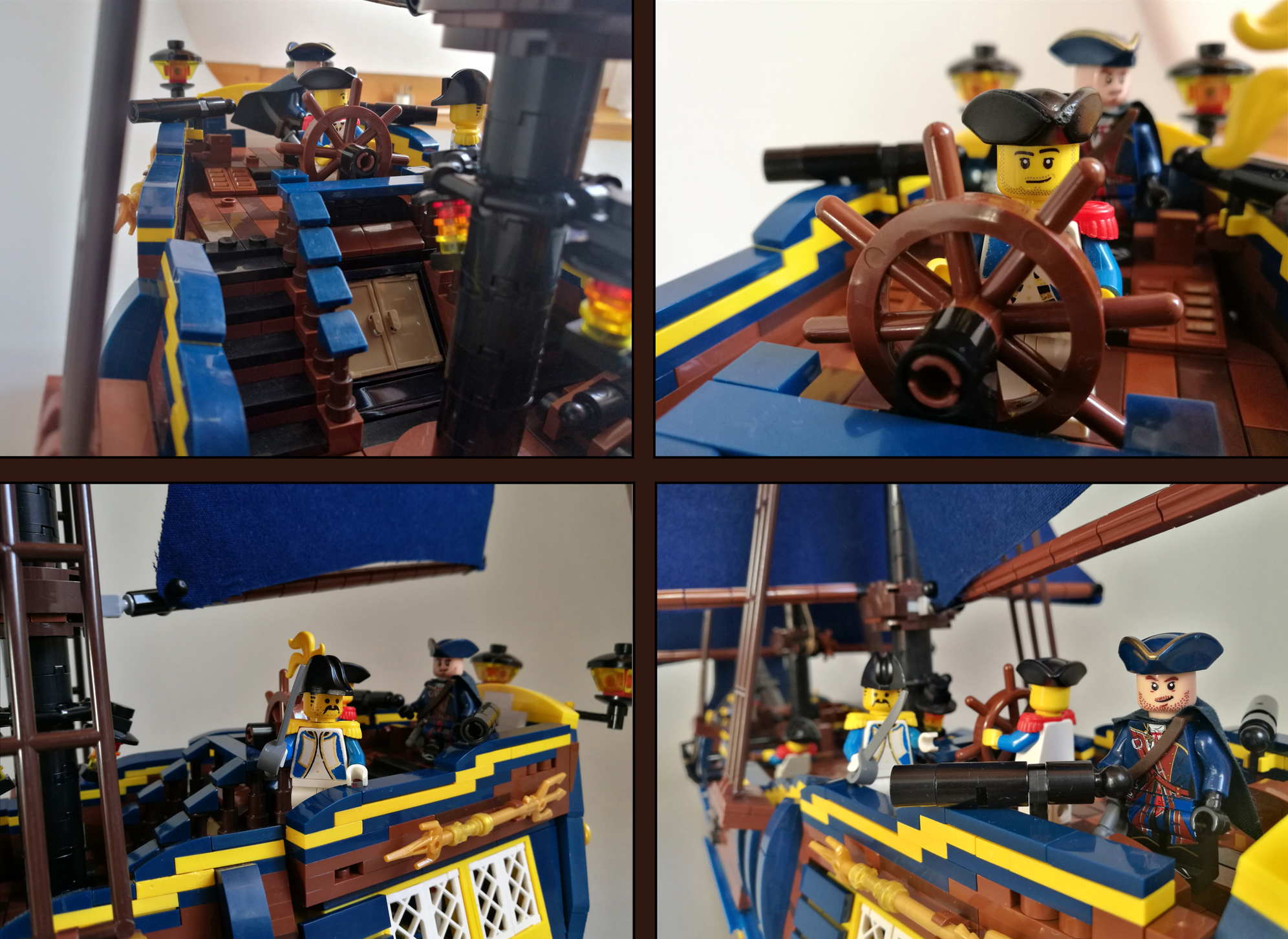 Welcome to the quarter deck – governor Broadside is no mere diplomat, he’s a naval leader who’s not afraid to take command!

Both the quarterdeck and mid section of the main deck allow easy removal without loss to the structural integrity, ensuring maximum playability and convenient access to the Triton’s interior. 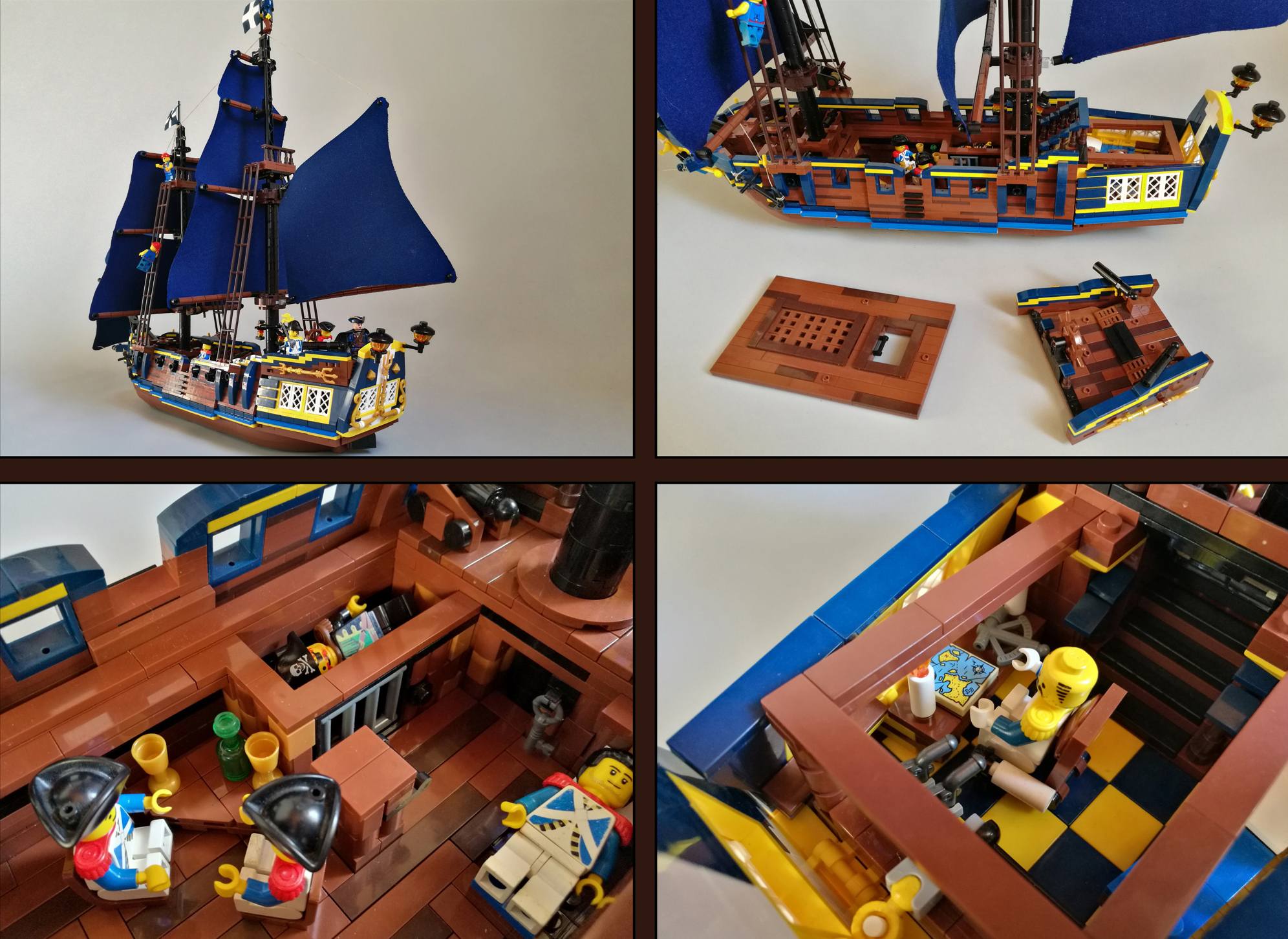 Now let’s take a look beneath the main deck… looks like they caught a pirate!

Governor Broadside’s cabin, contains the essentials for governing at sea. There’s a work table with the all important treasure map, a sextant to ensure the Triton remains on course, and a comfortable chair that rivals Kirk’s chair on the Enterprise – come on… every bold leader needs an authoritative chair!

For when Captain Redbeard comes a knockin’, Broadside’s cabin boasts a well stocked armoury brimming with firearms and his favourite sabre.

The mid section features a brig to provide accommodation to bothersome pirates who wish to board without permission.  There’s also a berth for the weary soldiers as they are often deprived of suitable bedding, and a modest mess hall where that nectar of the gods is severed, I.e. the crews daily ration of rum.

Once upon a time there was a ship by the name Triton which sailed under Imperial and Royal War Navy of the Austro-Hungarian Empire between 1836-1859. But alas! She went out with a bang on 9 May 1859 when a gunpowder magazine burst into a raging inferno, while the ship was anchored outside Lokrum island, near Dubrovnik in the Adriatic Sea.

To this day it remains unknown whether her fiery demise resulted from incompetence or a devious saboteur.  Marin however, places his doubloons on the curse of Lokrum – any self-respecting vessel should avoid that island at night!

The Curse of Lokrum? Egad!

What be that ye may ask?

In 1023 the Order of Saint Benedictine founded an abbey and monastery upon the island. The name “Lokrum” derives from the Latin word, acrumen, meaning sour fruit. This term originates from the Benedictines tradition of cultivating exotic plants on the island, but they can’t have been very successful farmers if the fruit was sour!

Legend has it the Benedictine monks were decreed to leave the island by an of individual of unspeakable power. Upon the night of their evacuation, the monks traversed the island dripping a trail of molten candle wax, while chanting “Whosoever claims Lokrum for his own personal pleasure shall be damned!“. Somehow this magically placed a curse on the island and nevermore did the monks return! 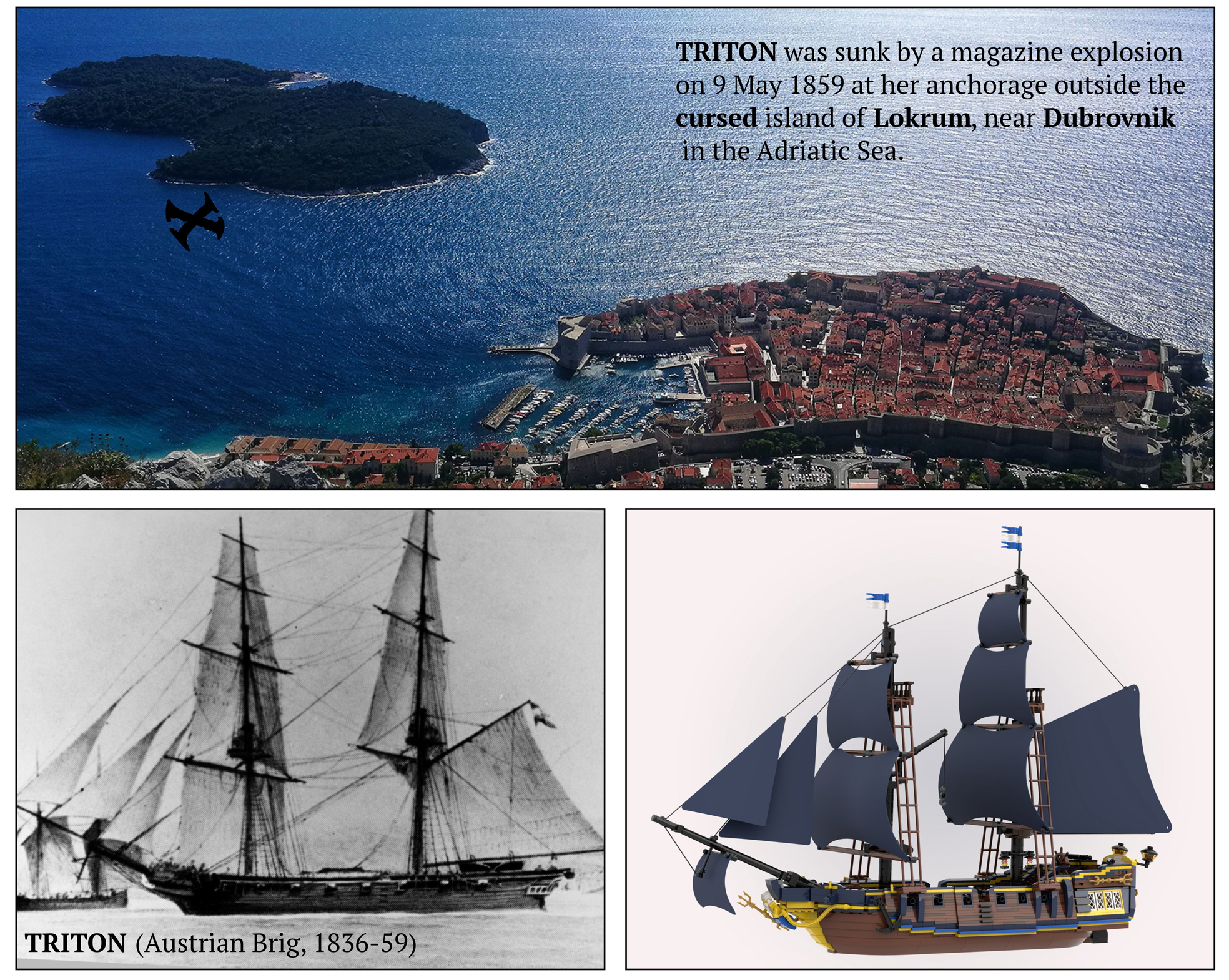 As the Austro-Hungarian Empire employed similar colours to French imperial forces which inspired the blue coat Soldier sub theme, Marin felt it was logical to use their flag on the Triton. This afforded him an opportunity to experiment with colours. Drawing much inspiration from SleeplessNight’s MOCs and his bold use of lively colours, prompting him to incorporate a technique or two from the best. The yellow frame windows with white lattice are homage to the beloved Caribbean Clipper.

What I really wanted was for bluecoats to have a formidable ship, not too large but with more firepower than the Barracuda for instance. Triton is that ship, and it will play a major role inside an upcoming 100+ pages graphic novel, pirate-themed mind you, which is currently in the writing process (and always one step away from the good old development hell).

To give you some idea about the graphic novel, a small introduction of the story was published HERE – just scroll down until you hit the comic. 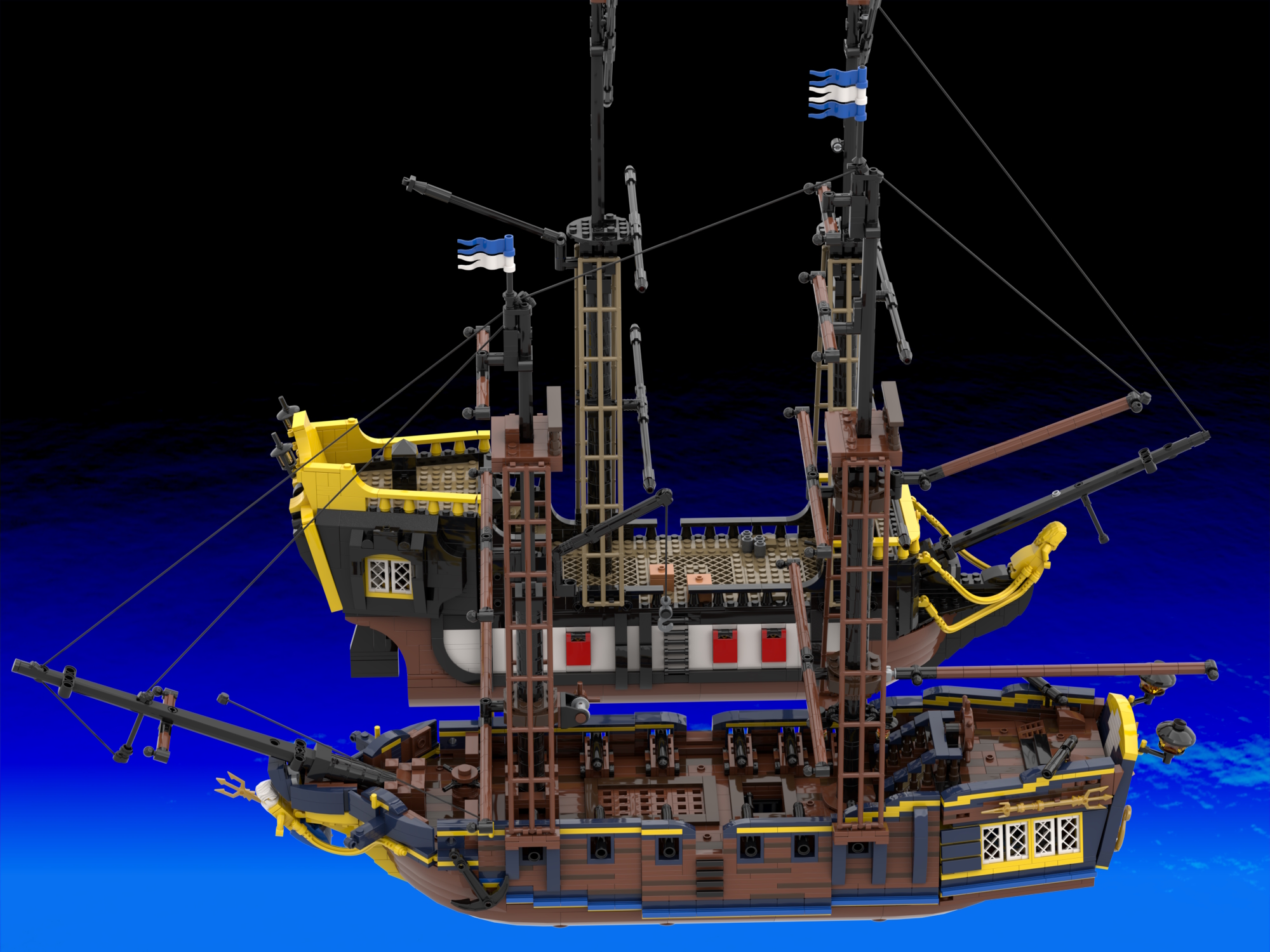 So how does the Triton compare to the 2020 version of the Blacks Seas Barracuda? 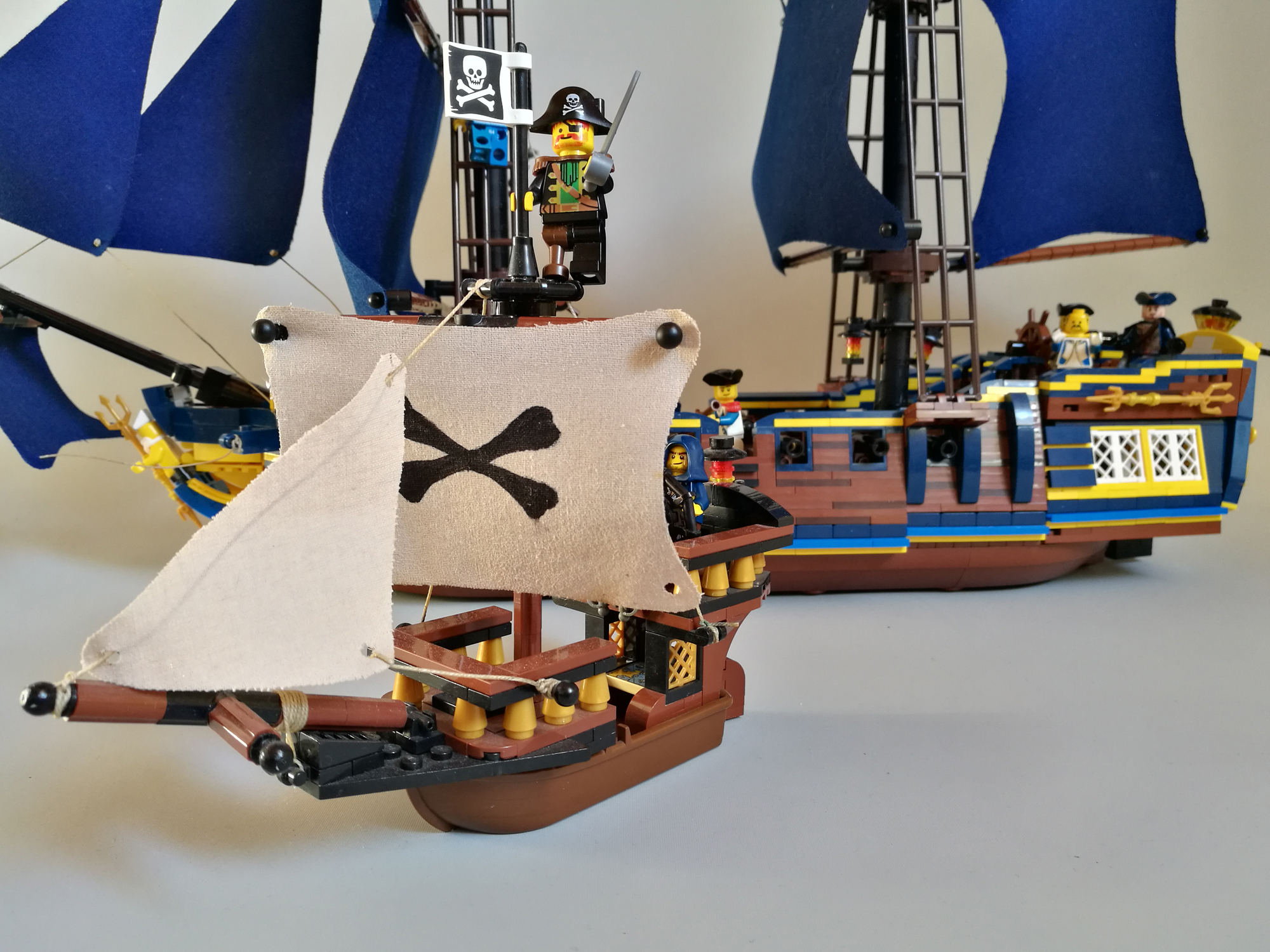 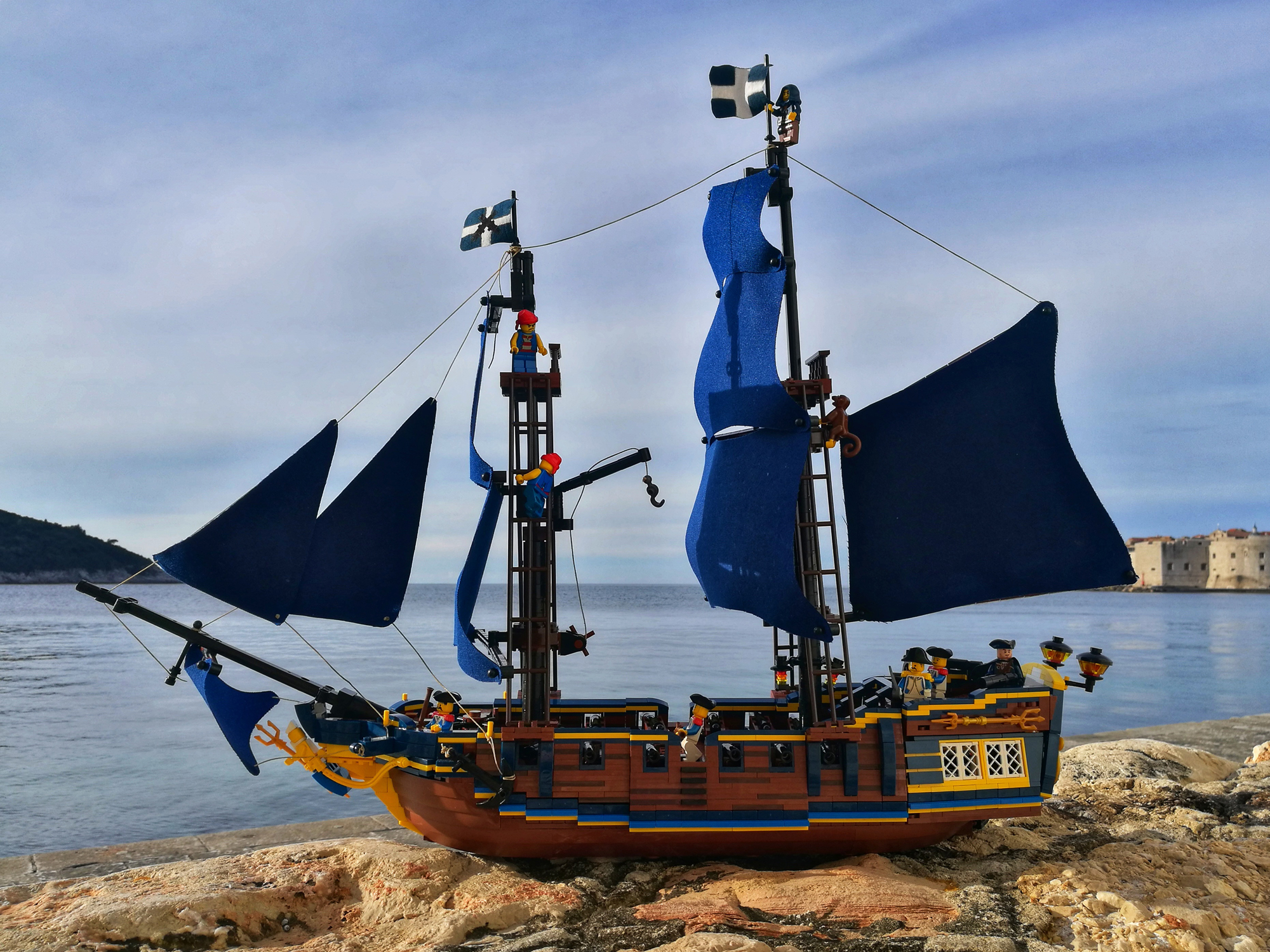 Oh look! There’s Fort St. John at Dubrovnik in the background!
Not every day you see that in a MOC photo, do you?

One of the cannons from the real Triton was salvaged from the sea floor some 60 years ago and is now mounted at St. John fort as a decoration. 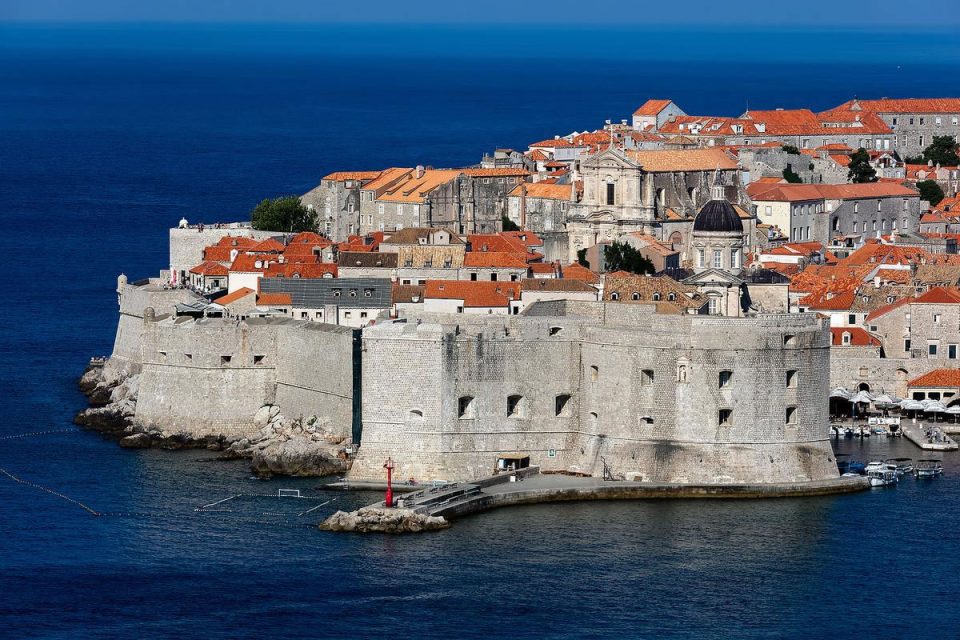 If you’d like to commandeer the Triton and make her as part of your Soldier’s fleet, you’re in luck! Marin has made building instructions available on ReBrickable.

And if yer tight on gold, he’s offering a 25% discount which is expiring sooner rather than later. So don’t miss out!

Don’t want the hassle of sourcing all the pieces yourself? Not a problem! Marin has you covered – you can buy the instructions and all the pieces in one convenient box!

But there’s a catch…  the building elements are produced by a third-party manufacturer; meaning it isn’t authentic LEGO. The Trition has been licensed by Marin and is available for international purchase through MedievalBrick and their affiliate company, LETBricks.

Marin assures us the quality of the building elements hold up to authentic LEGO standards, but at a far more competitive price. He can attest this claim as he received a Triton as a test build and was quite pleased with the product he received. As per usual with international purchases, please allow 4-6 weeks for delivery.

Also be aware, to avoid Intellectual Property infringement, the elements with the blue coat Soldier flag design are not included.

If yer curious about the quality of non-authentic LEGO sets, read Marin’s Black Pearl review in which he builds and thoroughly examines a ship designed by BrickMOCBay that was released by the same third-party manufacturer.

Marooned Marin has emerged as a bold veteran of the LEGO Pirates Forum in which he regularly contributes to the piratical LEGO discussions, along with helming The Shipyard to author many of Classic-Pirates.com’s finest blog posts! Based in Dubrovnik, Croatia he enjoys stunning coastal scenery and a lovely view of a fortress that was incorporated into a popular TV show a while back.

As mentioned, Marin is as skilled at building as he is talented at blogging, periodically expanding his MOCing repertoire with new sea craft, both historic and recent. You can acquire building instructions for all his creations via his ReBrickable profile or enjoy their imagery on his BrickSafe.

Does the Triton measure up to the Imperial Flagship? What about the Caribbean Clipper? Whether it be just building instructions or the entire set, will yer purchase a Triton for yerself? Or can you suggest improvements and  alterations to the design to make it more to yer liking?

Now, set sail for the LEGO Pirates Forum where you can meet Marooned Marin yourself – he’d love good yarn about his ships and all things LEGO Pirates! 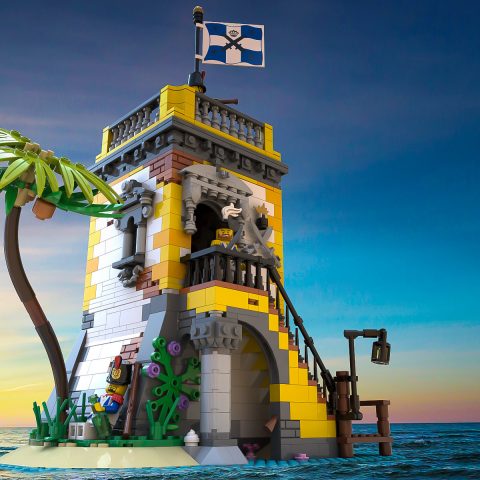 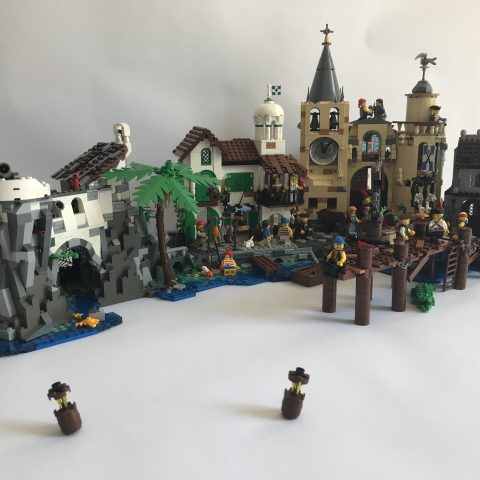