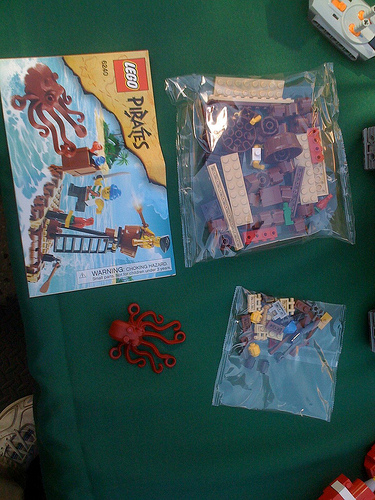 This small to medium-sized set, belonging to the new 2009 Pirates line, features a giant Kraken that attacks a small raft of some pirates that are trying to escape with their loot!

6240 Kraken Attackin’ counts 78 pieces and has 2 pirate-minifigs, a parrot and of course the Kraken itself, also included is a small raft that has its own crow’s nest and a paddle to steer it! The pirates are armed with a cutlass and musket, and have a box with some gems they probably found on an island, the only thing I actually miss in this beautiful set is a sail for the raft. The current retail selling price is set at 9 USD, IMO a fair price. The LEGO Group offers an age advisory of 5 to 12 years, but that has never stopped a real AFOL before!

So rush to the Pirates forum to discuss Kraken Attackin’, one of the new Pirates 2009 sets!