Do the Vidiyo sets have any relevance to LEGO Pirate fans?

2020 was a very generous year for the LEGO Pirates theme with the release of the 3 in 1 Creator set, 31109 Pirate Ship, and Brickybrick’s (Pablo Sanchez) LEGO Ideas submission, 21322 Pirates of Barracuda Bay. The latter of which introduced a refreshed design aesthetic to the theme and was eagerly adopted by MOC builders, inspiring them to reimagine classic sets, like the 6270 Forbidden Island remake by Elusys Ra Arwal in a similar style. 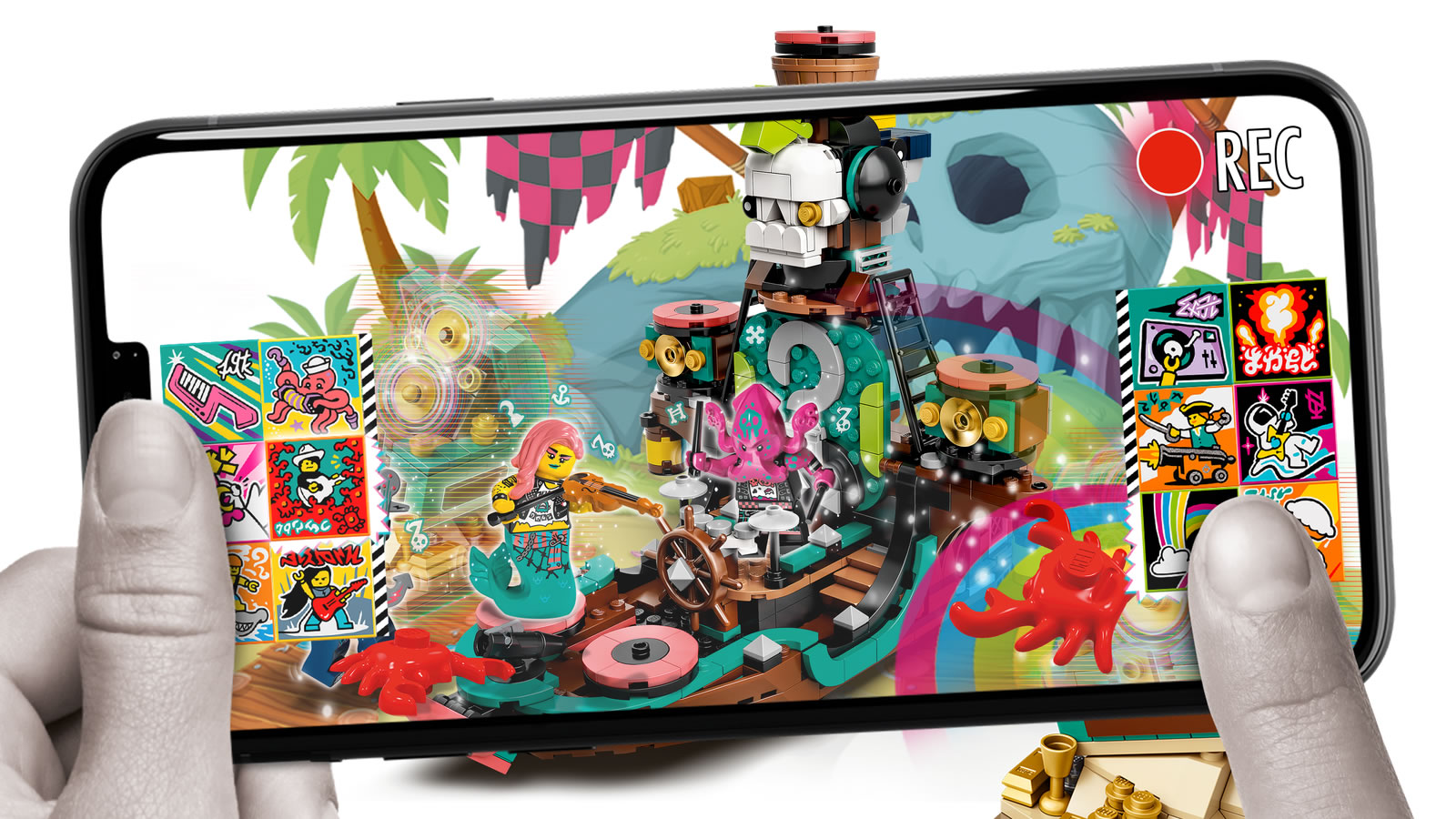 A year later the LEGO Group has unleashed Vidiyo upon us, a new theme allowing children to not only create their own music videos, but star in them utilising AR (Augmented Reality technology).   So basically, it’s video karaoke taken to the next level… the kiddies film themselves singing and dancing while the free app inserts life-sized minifigs into the live video, complete with a stage from built virtual LEGO elements. In addition, the children can build the stage themselves, select songs and three minifigure band members.  The sets also include printed 2×2 tile called BeatBits, which add effects to the videos once scanned with the app. 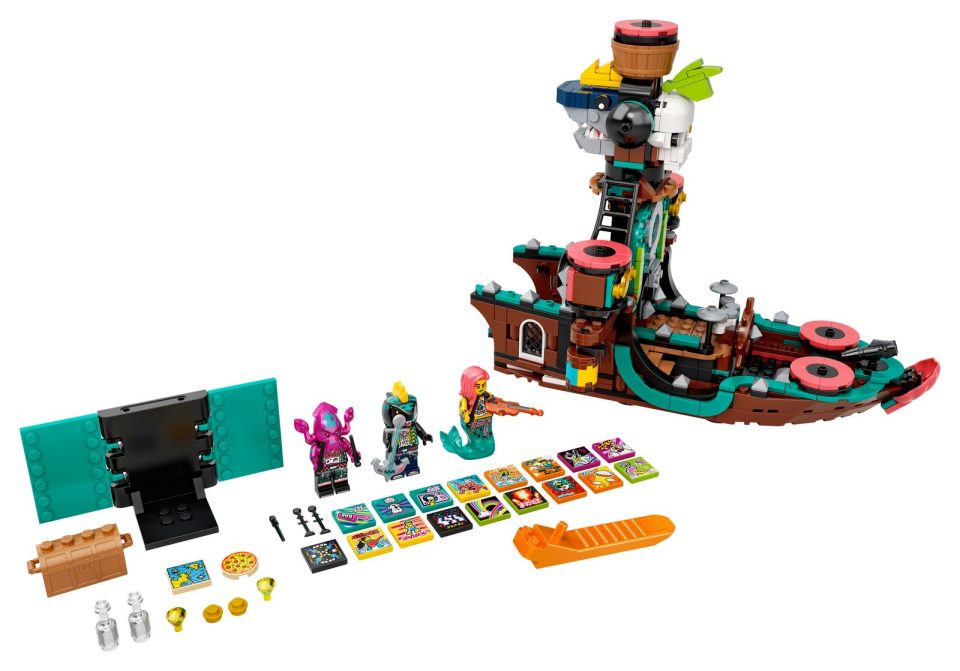 Set includes everything you see here…

Apparently, Vidiyo is “Fun, interactive… revolutionary. Get ready to Capture the Beat of Your World!”

Yes, hours of interactive, revolutionary fun for the whole family, or at least it will occupy the kids for a couple of hours before they get bored and move onto something else.

But what’s in it for the AFOLs?

Wave 2 is introducing the set 43114 Punk Pirate Ship, which, from the name, you’ve probably ascertained, is loosely based on a pirate ship.  The set has two builds, the aforementioned ship and a stage upon for the minifigures to shake their booty… that booty being a glass bottle, treasure map and pizza. Yes, pizza – otherwise, how else are we going to get a pizza tile in a pirate set? 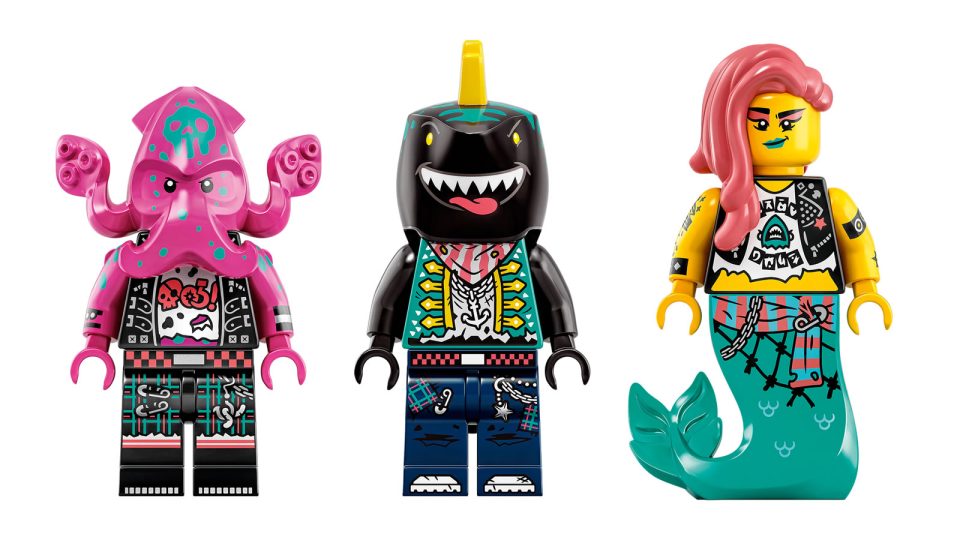 Hey it’s the calamari kid on the left!

Each of the minifigs is nautically themed with its own musical instrument; the shark jams on an anchor shaped guitar, the cephalopod pounds the drums while the mermaid plays a merry tune on a  fiddle.

Fantastic! “What great additions to my crew these will make” you may be thinking. Afterall, it’s been a while since we’ve seen sea creature minifigs – they’d be right at home with Davy Jones on the Flying Dutchman.  Ah yes, perhaps not. With their teal and magenta highlights, and the cyberpunk designs adorning the legs and torsos, these minifigs would perhaps clash with your existing crews.

Notice how it’s not a seafood pizza? 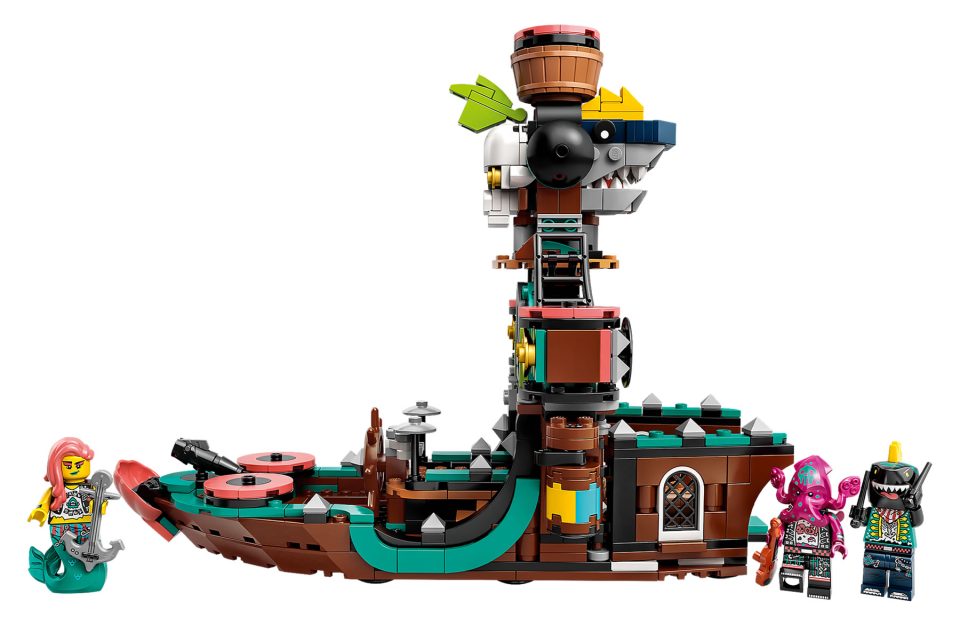 The ship isn’t really a ship either, it’s more of a barge which stores all the other pieces.  Sure, there’s a brown hull, ship’s wheel, and crow’s nest, but almost everything in between is leftover stage and audio equipment. The skull and shark’s head beneath the crow’s nest is a nice touch, and there’s a lovely clam piece on the bow, so maybe that will be useful for your next under the sea MOC, but overall, the set doesn’t hold up as a bona fide pirate ship. 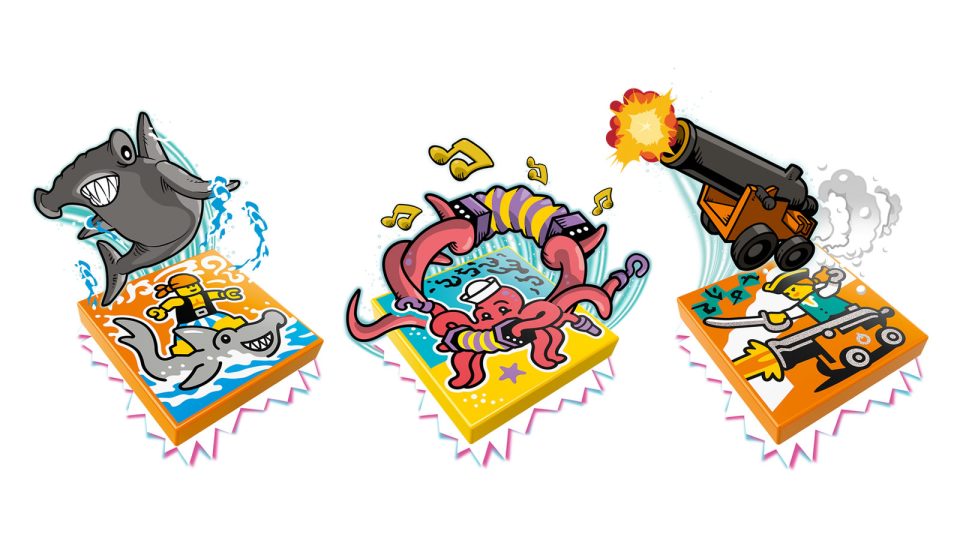 Perhaps the biggest highlight (in a classic sense) are the BeatBits. At least two of the tiles depict LEGO Pirates more traditionally, with one resembling Robin Loot firing a cannon and another featuring the Scallywag Pirate from LEGO Minifigure Series 16, riding a surfboard. As for the octopus… unless the cephalopod found in 6240 Kraken Attackin’ can play the piano accordion, we have no idea which creature inspired this particular title.

So, Vidiyo is very much aimed towards children with little regard towards AFOL appeal. That’s not to say a talented AFOL builder couldn’t expand upon what’s on offer and turn it into something half decent. There are some useful pirate themed elements, but for the price, it’s a bit steep for what’s on offer.  Maybe Vidiyo pirates would fit in well with Metalbeard from the LEGO Movie – the Systar Party Crew would love to collaborate!

Would you buy this set? And if you did, would you use it for MOCs or keep it for its intended purpose?

Here is a convenient affiliate link if you’re interested in investigating further. 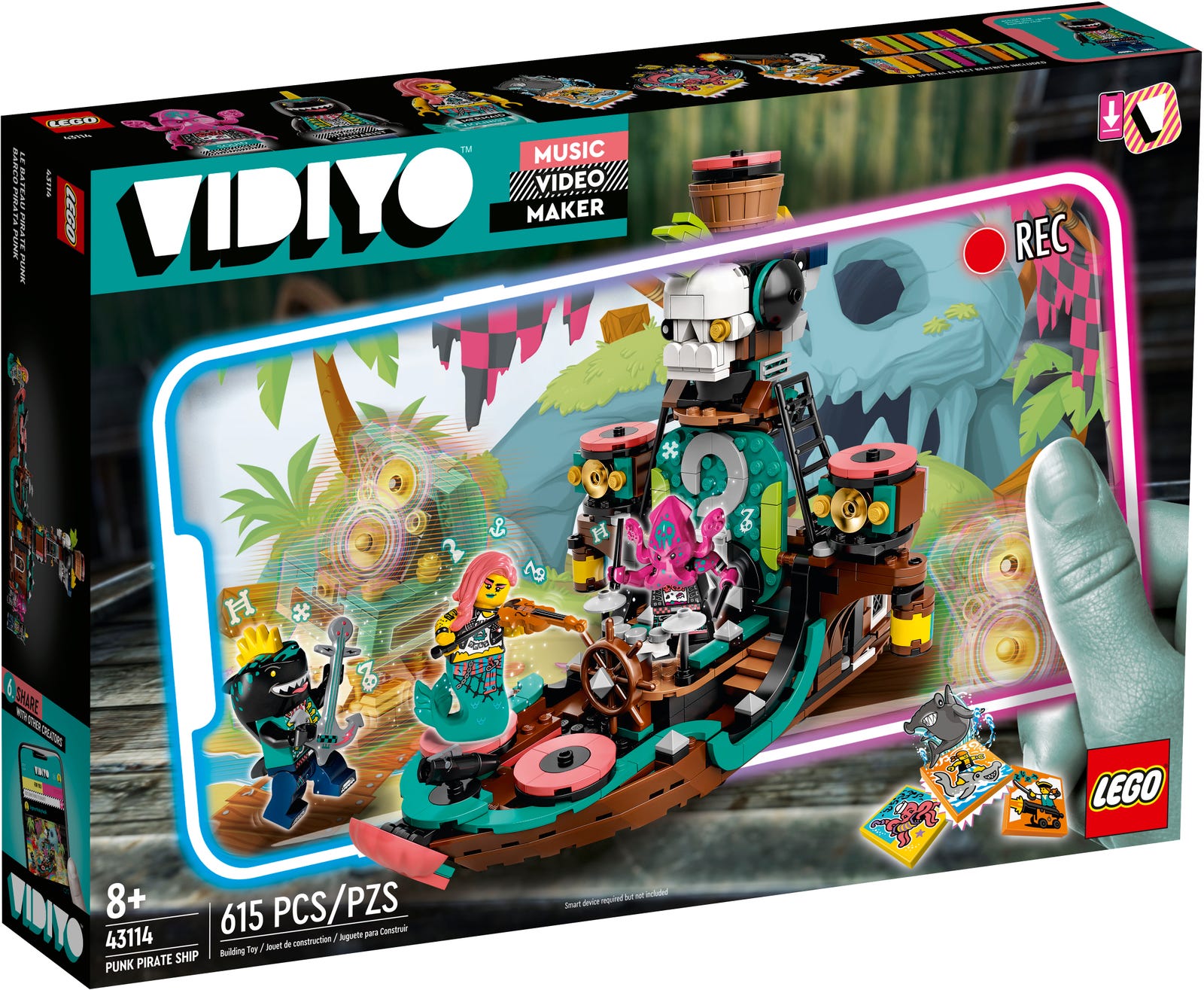 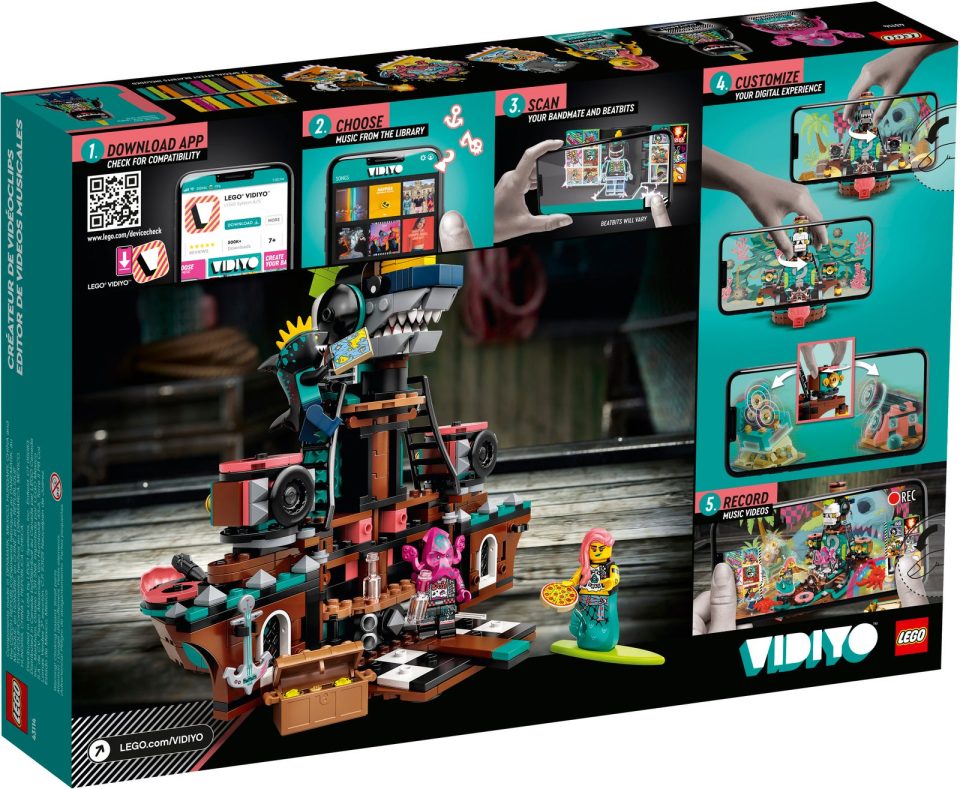 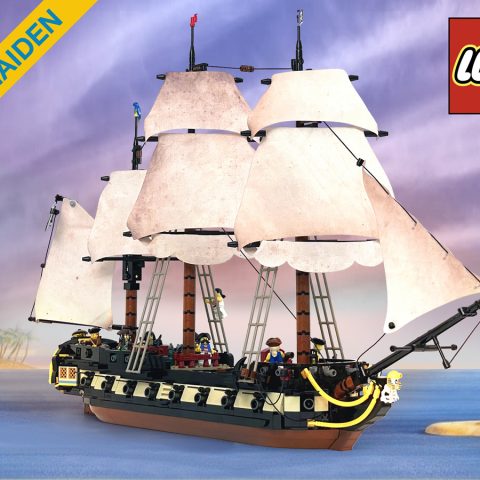