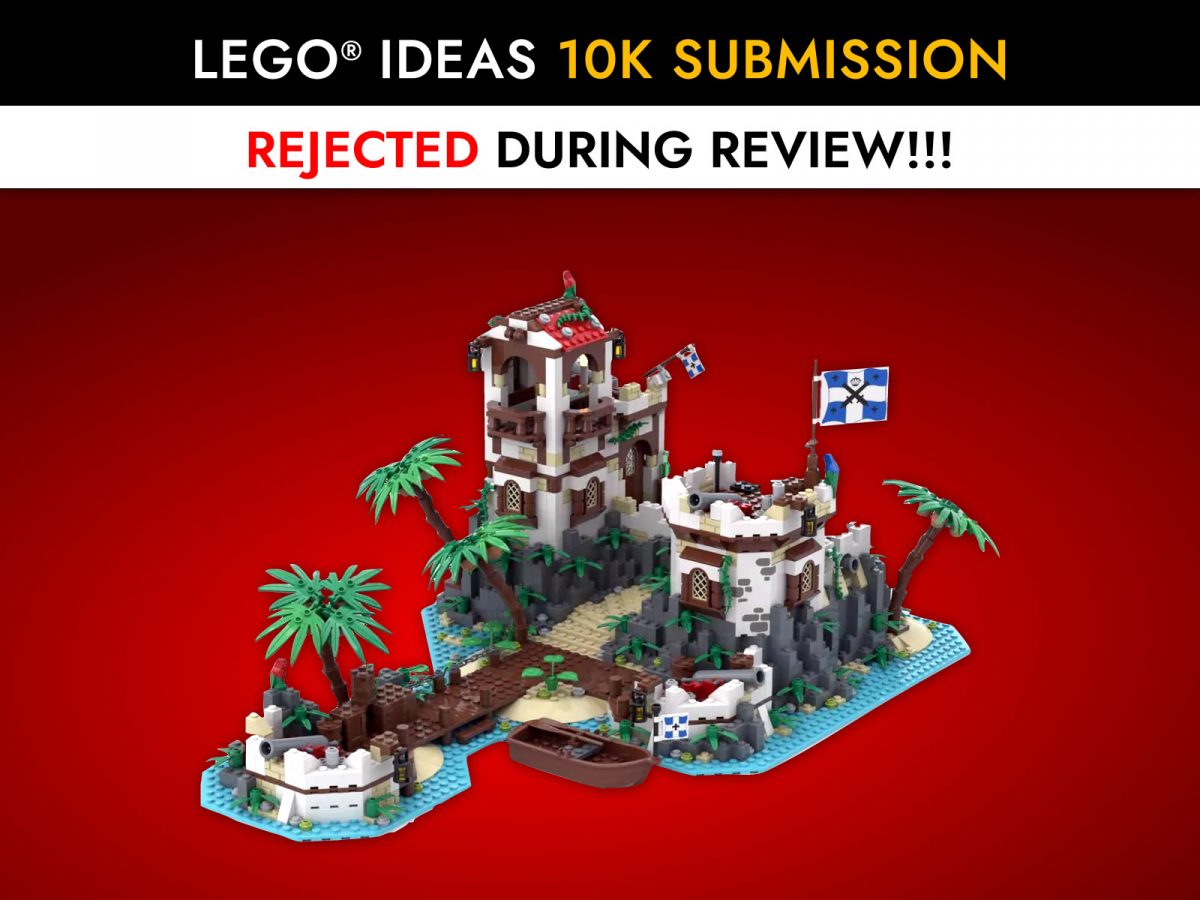 Terrible news, mateys! “Imperial Island Fort” has been rejected by the LEGO Ideas Team during the Second 2021 LEGO Ideas Review.

Instead, they selected A-Frame Cabin by Norton74 (Andrea Lattanzio) and BTS Dynamite by JBBrickFanatic (Josh Bretz) and BangtanBricks (Jacob)

So let them know what a terrible decision they’ve made in the comments of the official blog post announcement!

First and foremost, congratulations to BrickHammer for reaching 10,000 supporters on LEGO Ideas, and toward everyone for all of the support of the Imperial Island Fort project! The results of the LEGO Review are in and you can see full details on the LEGO Ideas Blog.

Thank you to BrickHammer for the passion and creativity that went into this project, and to all of you who voted so that we would have the opportunity to consider this as a potential LEGO set. We’re sorry to deliver this disappointing news.

This is the second LEGO Pirates themed submission to qualify for review and the first Imperial Guard sub-theme submission to sail across the qualification line.

This morning, we closed the latest review qualification round with 34 submissions reaching the 10,000 supporter milestone and therefore qualifying for the Second 2021 Review.

These 34 product ideas have hit the 10,000 supporter milestone between the months of early May 2021 and today’s review qualification date, the 6th September 2021. We’d like to offer our congratulations to all 10K members who’ve made it this far!

Product Ideas hitting 10,000 supporters after today’s deadline will be eligible for the next review period instead that starts on the 10th of January, 2022. In fact, one project just missed the deadline and will therefore be a part of the next review.

We look forward to celebrating our 10K Club members through the 10K Club Interview series, which will kick-off as soon as we’ve announced the First 2021 review results.

Have a favourite or perhaps multiple favourites? Let us know in the comments what you’re hoping will make it through this review.

Earlier in 2021 Pirate fans raised concern when they noticed the BrickLink Designer Program was not crowdfunding any Pirate themed sets, despite three (or potentially 4) Pirate submissions reaching 10K in support. Not mention, every fort we’ve been posting on Instagram has been receiving exceeding 3K likes.

An Imperial Fortress is certainly a welcome sign, but let’s not get our hopes up because it may not pass review. Also, let’s consider this submission is competing with around half a dozen Castle themed submissions, including a medieval harbour and there has never been a medieval take on a harbour released as an official set.

At the bottom of the official LEGO Ideas blog post is a comment section to express your enthusiasm so the LEGO Group know how much you’d LOVE an Imperial Fortress. So get commenting!

The One that got Away

Another Pirate related submission, Land Ahoy By Ralf Ranghaal narrowly missed out for review as it failed to achieve 10K supporters before the deadline.

But that means it’s a prime candidate for the first 2022 review. Isn’t that right, LEGO Group? 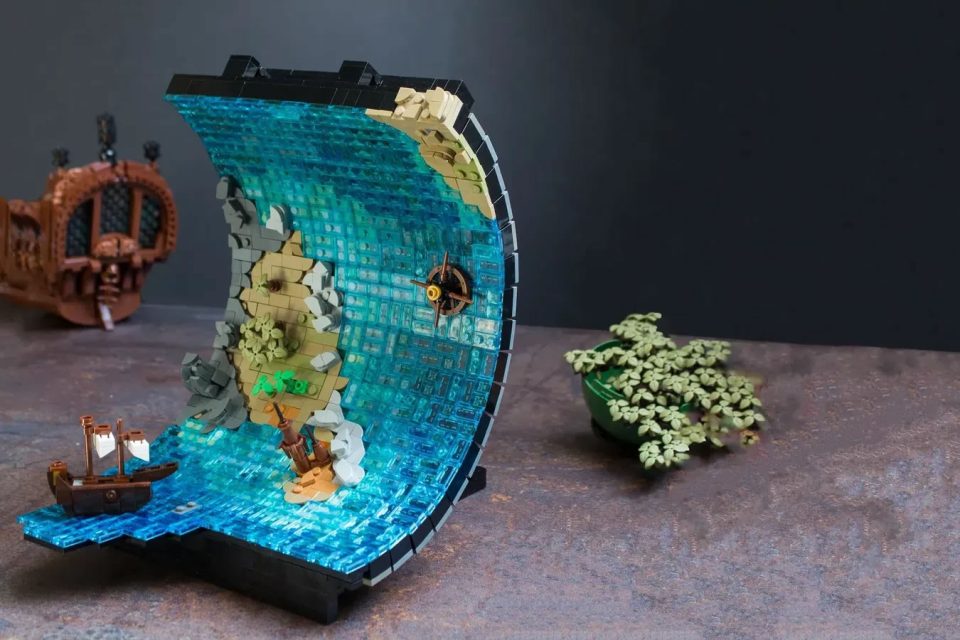 This small island fortress is a blend of classic LEGO strongholds like the 6267 Eldorado Fortress and actual real life Caribbean architecture! Well not really, according to historical accuracy, but it sure does look great in LEGO form! Just overlook the fact BrickHammer has used the Soldier’s flag in conjunction with the Imperial Guard minifgures.

The island consists of a big main castle on top of a rocky cliff and a pier beneath it. The castle contains a gatehouse tower and the governor’s house! The pier beneath the castle is fortified with 2 cannon bastions to guard the island from incoming pirate ships or Imperial Armada attacks!

The proposed set includes around 1,500 pieces.

There may be some confusion with the flags…

The Idea
Since I was a child I have been a big fan of pirates and the old pirate LEGO theme! Now as an adult I am still an avid fan of history! This small island fortress is therefore supposed to be a blend of nostalgic classic LEGO red coat fortresses like the Eldorado Fortress and actual real life Caribbean architecture!

The Build
The island consists of a big main castle on top of a rocky cliff and a pier beneath it. The castle contains a gatehouse tower and the governor’s house!
The pier beneath the castle is fortified with 2 cannon bastions to guard the island from incoming pirate ships or Armada attacks!

The Imperial Guards could have a stronghold to rival Eldorado Fortress! 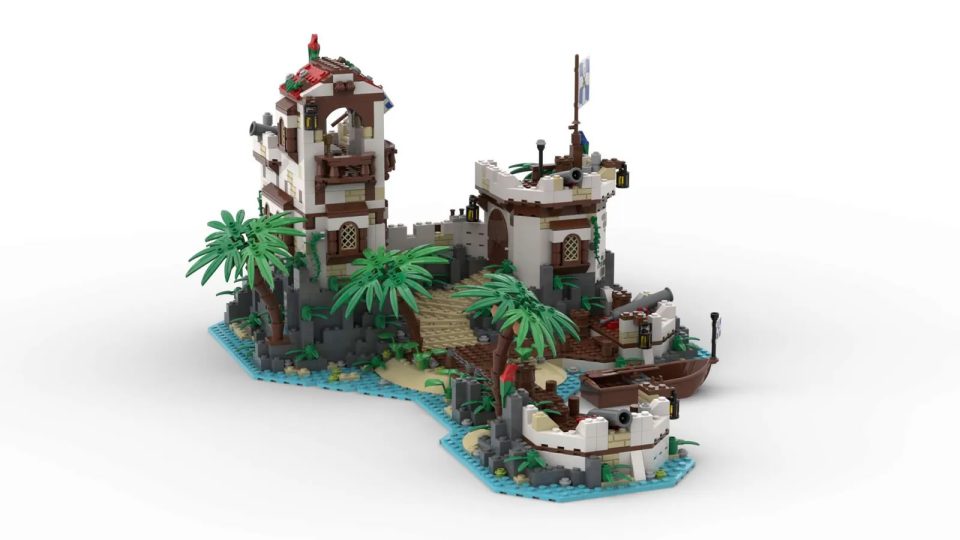 The rear approach is also guarded by a battery – they will not be flanked! 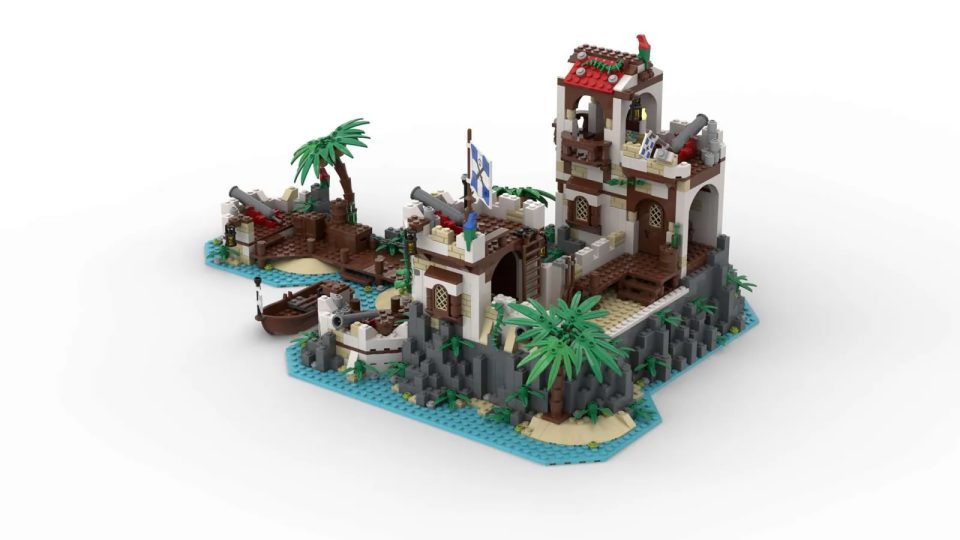 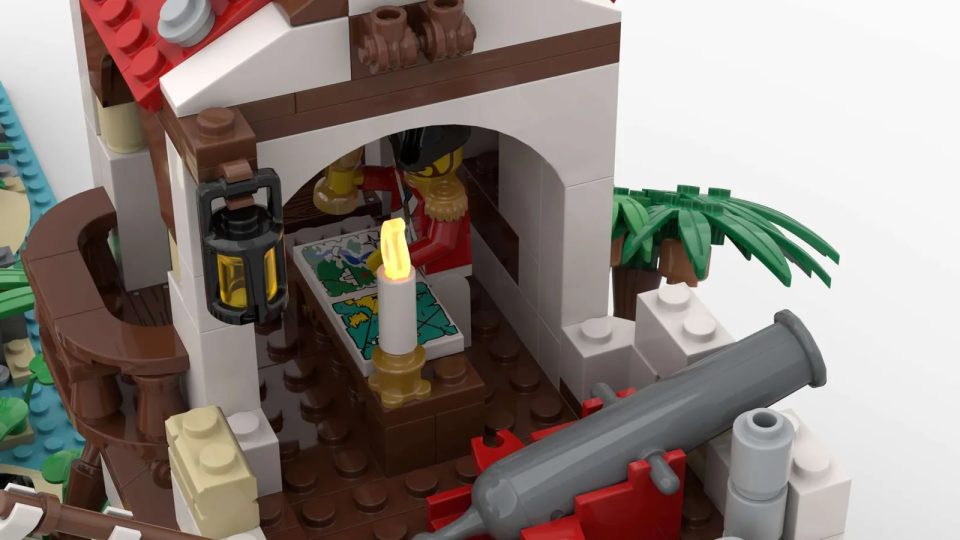 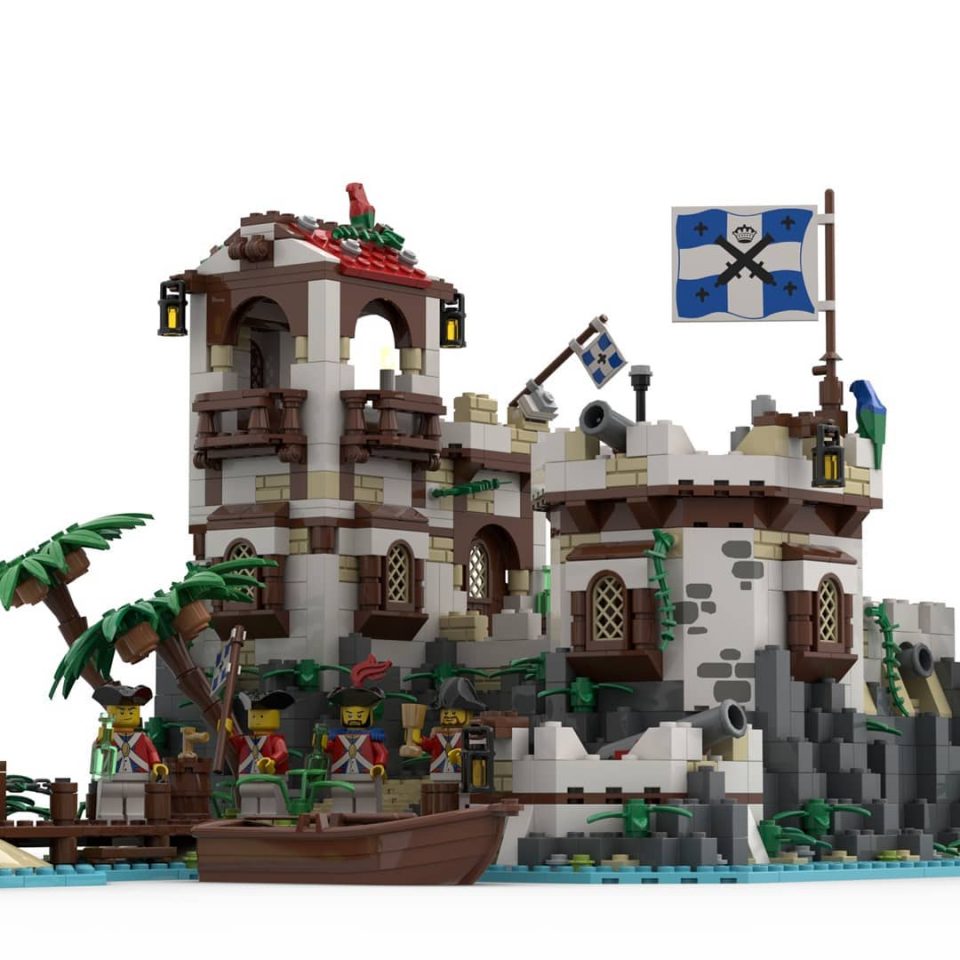 Actually, the Admiral also doesn’t mind a drink, or three…

BrickHammer is a 5 times 10K LEGO Ideas Club Member. Yes, that’s right, FIVE of his submissions have reached 10K supporters and here’s his LEGO Ideas profile to prove it! He’s a very talented digital builder and posts regular updates on his Instagram, so be sure to follow him for more exciting creations.

If you’re not familiar with his Imperial Island Fort, visit the LEGO Ideas submission webpage for additional updates.

And, as always, swing by the LEGO Pirates Forum and share your excitement about Imperial Island Fort – maybe another LEGO Pirate themed set will go into production! After all, rumour has it, 21322 Pirates of Barracuda Bay is coming to the end of its run later in 2021.