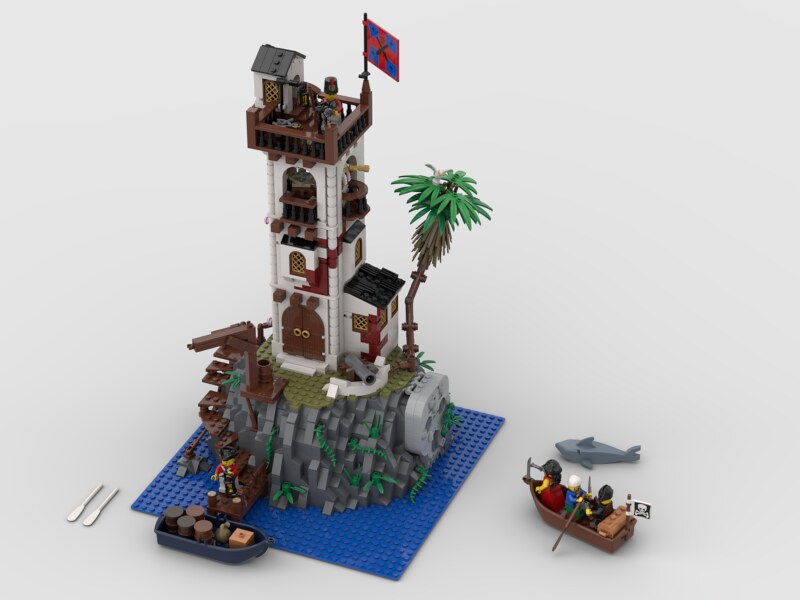 This is a reimagined version of Saber Island – this time the outpost has been built on the former volcano that makes up Volcano Island. 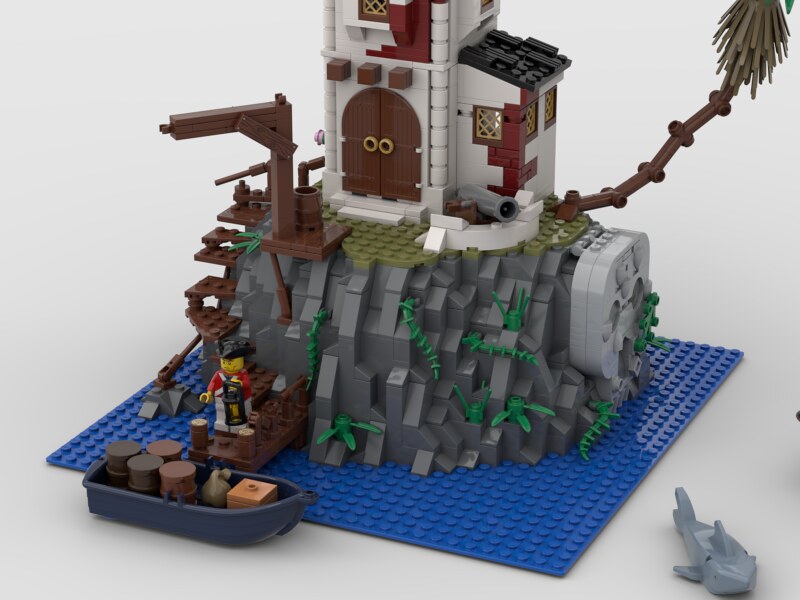 Set on a 32×32 base plate, made from under 1600 pieces with seven minifigures, a seagull, a shark, a crab, a lobster, a clam and a starfish. 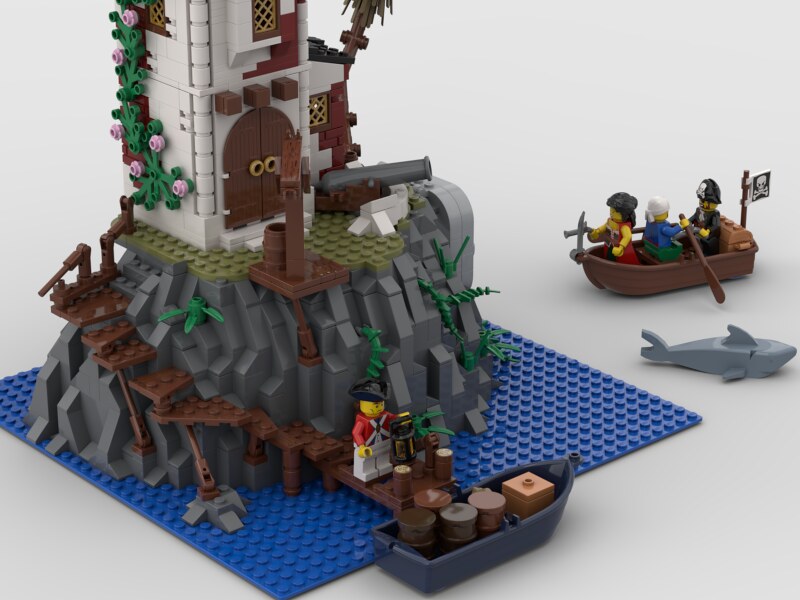 The little dock is served by a crane that can lift the cargo up to the fortress. For the poor Imperials, it’s up that rickety staircase we go. 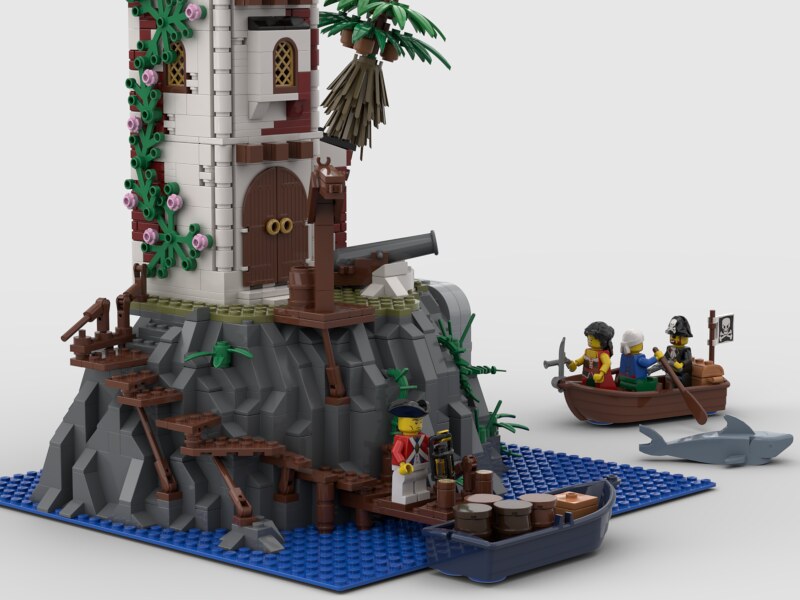 The staircase is in a bad state and many of the handrails have rotted away. Some supports have been put in to hold up what’s left, let’s hope they’re strong enough. 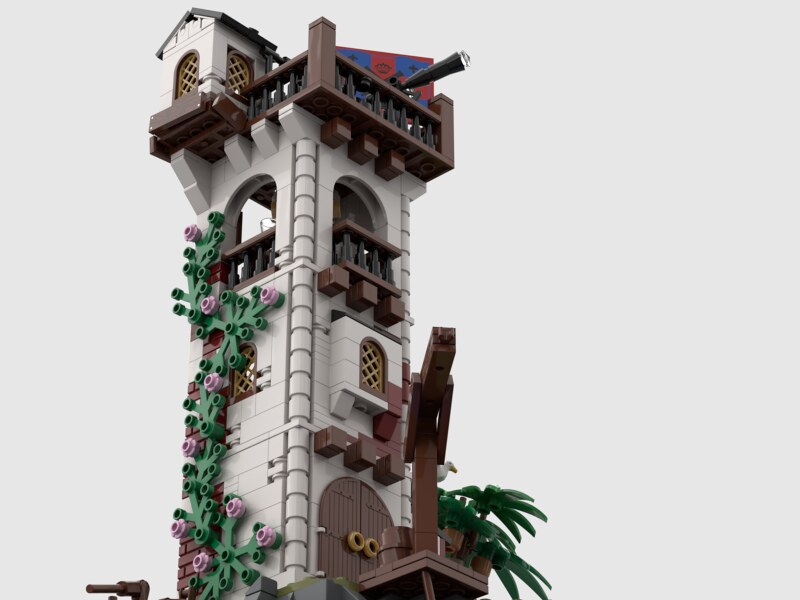 A view up at the outpost from the staircase. I added an extra level to the original set. 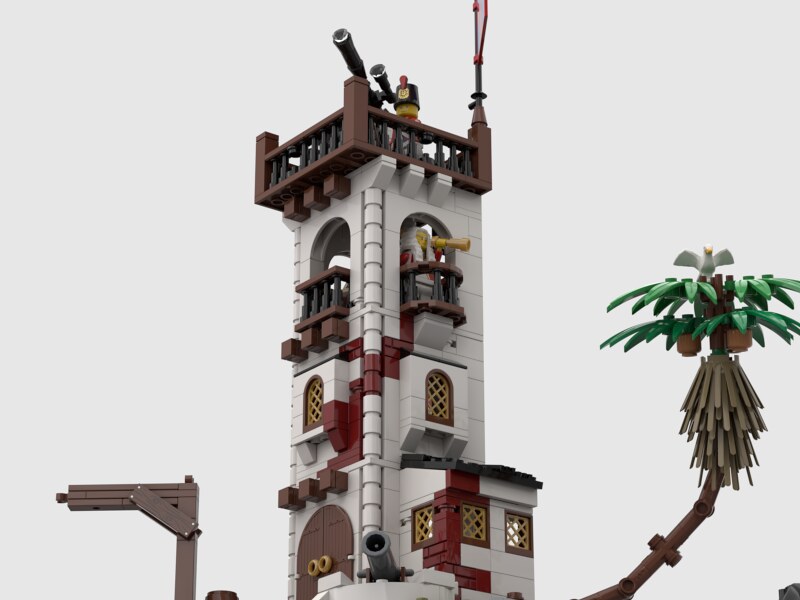 I also added a little extension to the side. 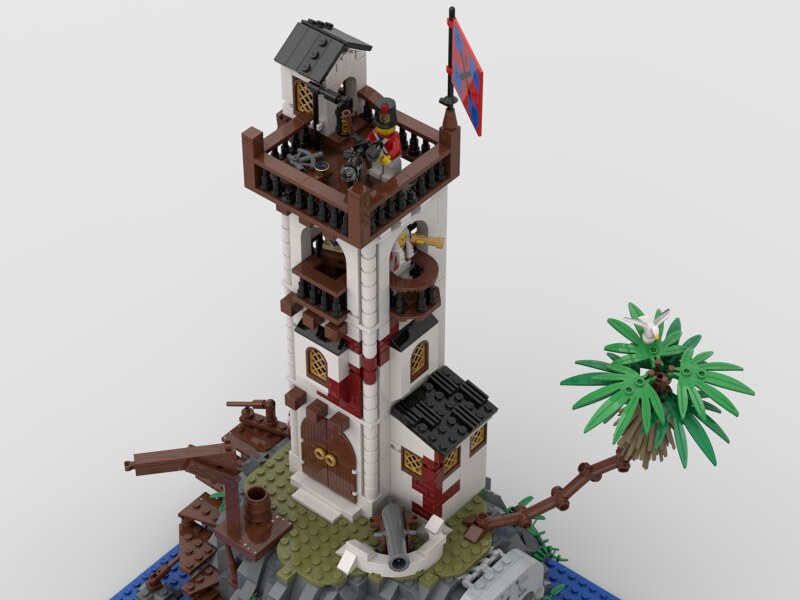 The roof also has a tiny bell tower build to raise the alarm when enemies approach. The cannon emplacement and tree are present as they are in the original set. 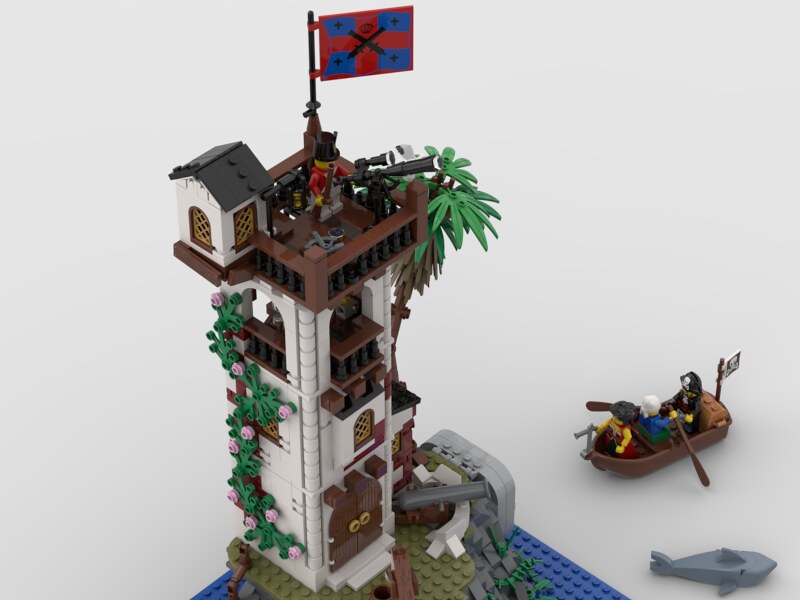 I added a creeper plant up the other side of the building to add a bit of visual interest. I chose dark red as the base colour, I almost went for dark tan. 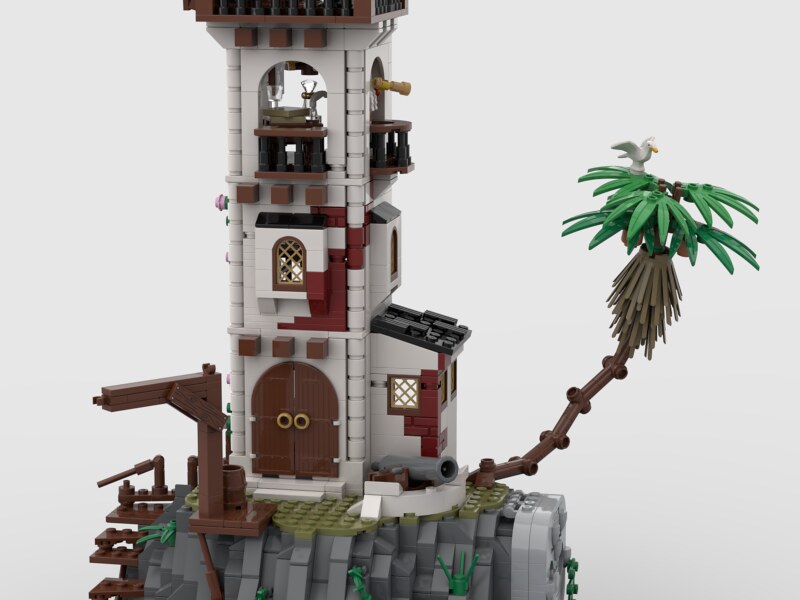 All three balconies and windows in the middle floors have different builds. 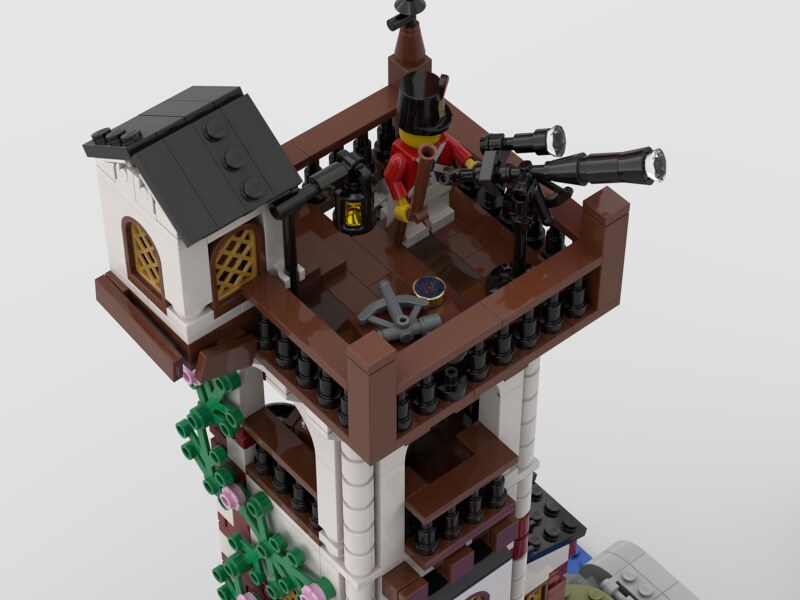 The roof has been enlarged and I used the broken rungs technique from the Elusys Ra Anwal’s Forbidden Island build to make the tower look run down. I would ideally have the telescope on pearl gold, but the sextant piece isn’t available in that colour. 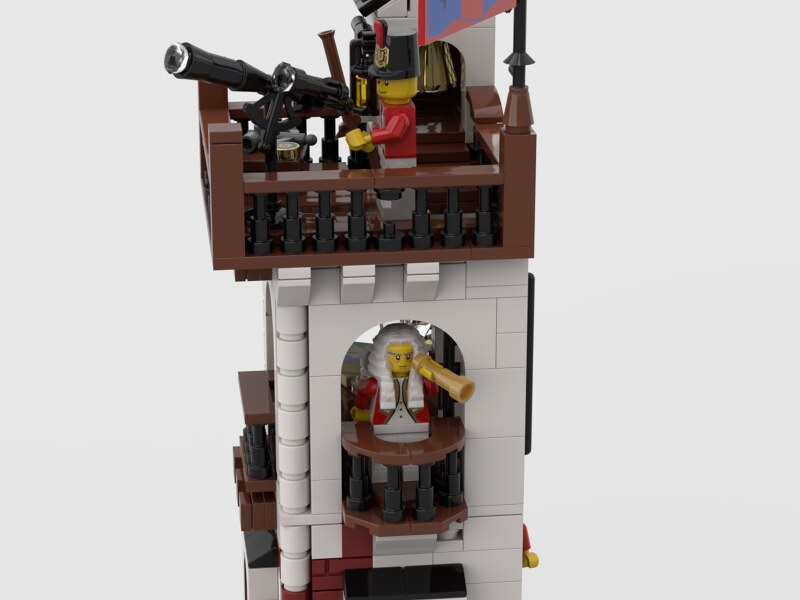 The roof has a sextant and compass accessory, you can just about see the alarm bell in the tiny building. Below the roof is the Governor’s office. 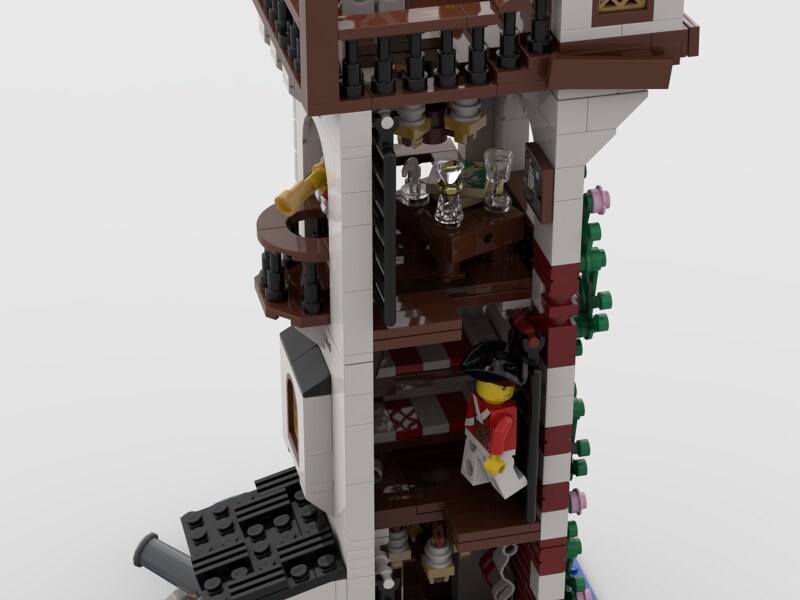 The Governor’s table is complete with maps, quill and ink pot, goblet and decanter, with a nautical painting on the wall. 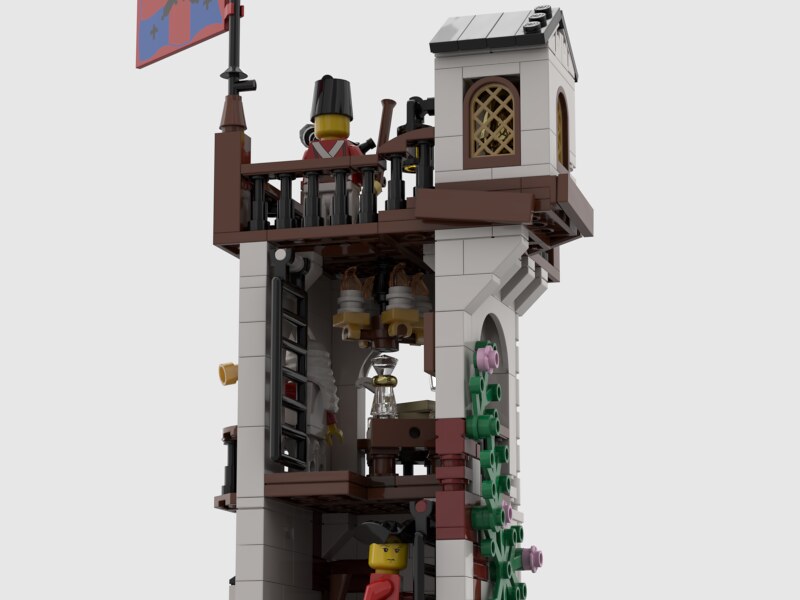 The office is lit by a chandelier, the table build, and most of the interior is SNOT. 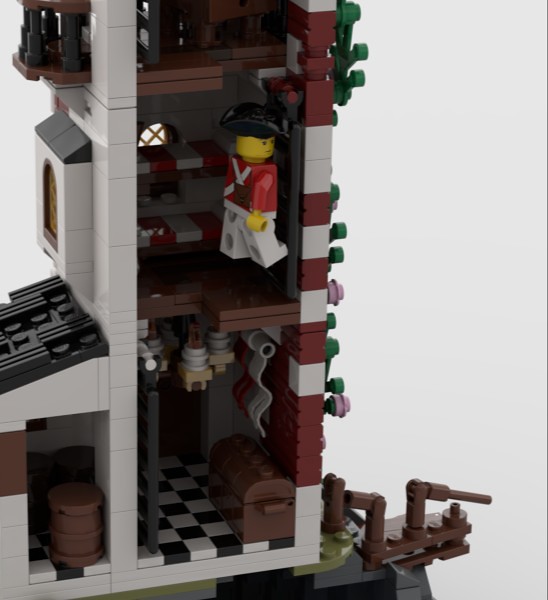 Below that is the barracks with two bunks, below that the entrance hall with a store room to the side. 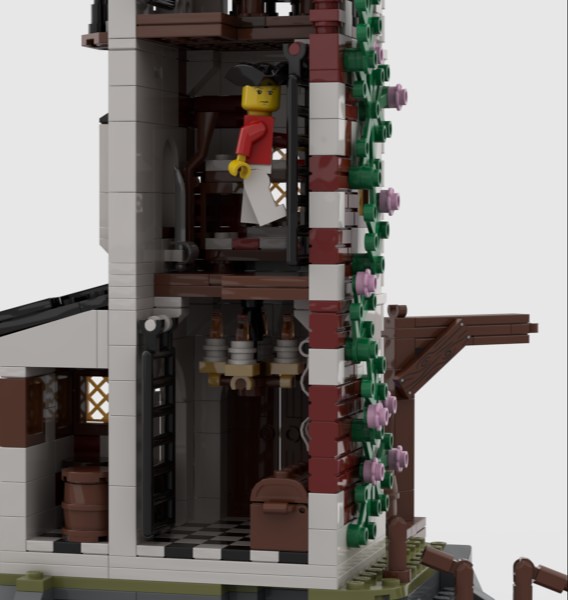 The barracks has a little weapon rack, the entrance hall has a banner and chest full of gems. ‘In real life’ there would be a mess hall and kitchen closer to the camera.

And now to the Volcano Island. 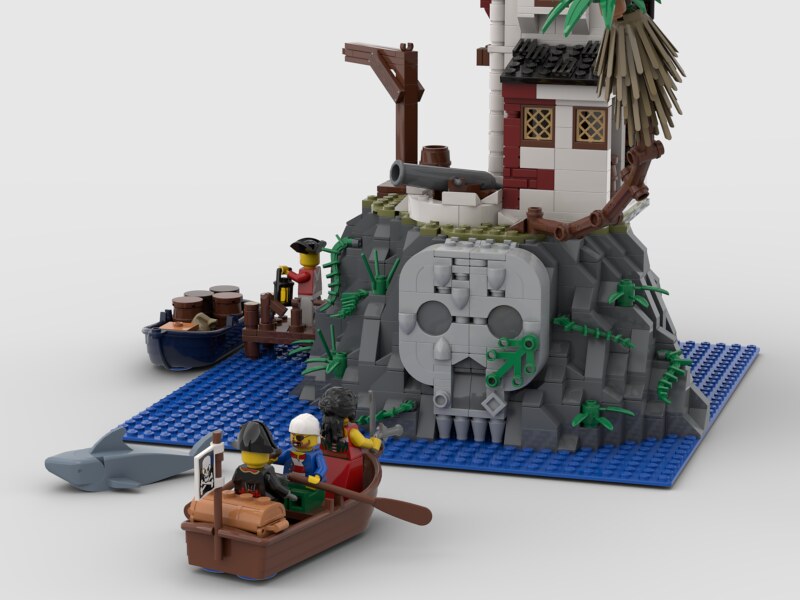 One thing I always wanted to do was have a skull that was solid rock, not with gaps for the eyes or nose. 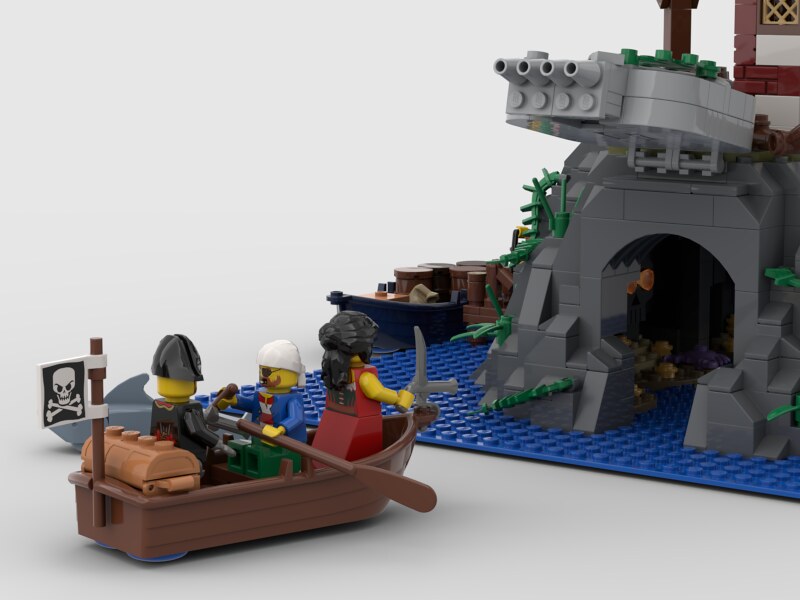 The skull opens up to give access to a hidden cave where the Pirates can store their loot. I did want to add a subterranean prison with access to the cave, but there was no room. 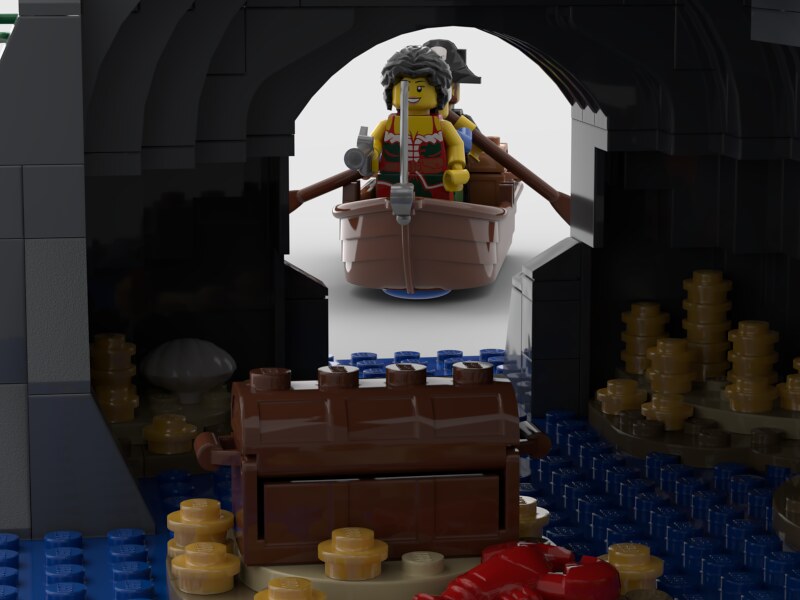 The Pirates have to be very sneaky to get in their hideout under the watchful eye of the Imperials. 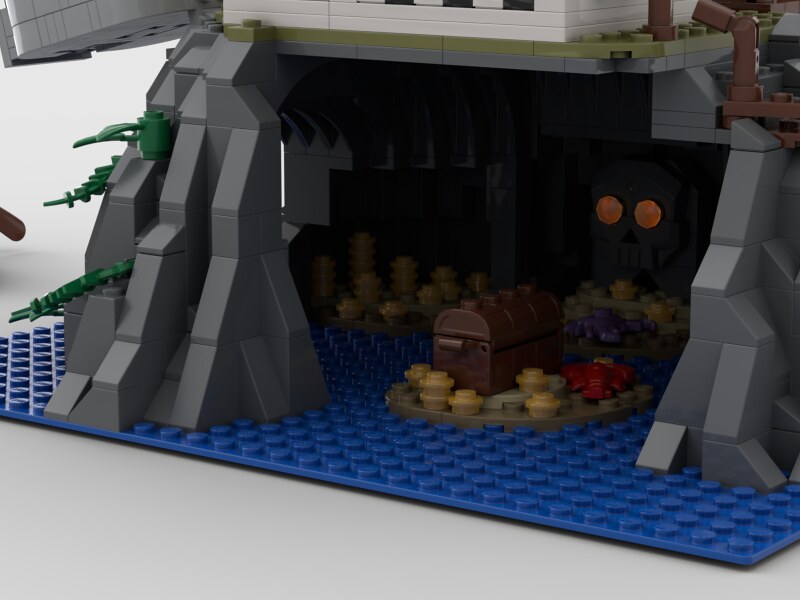 I should have rendered these without the roof, it’s very dark. There are little islands dotted around covered in coins. There is also a carved stone skull with glowing eyes, I wonder who carved it… 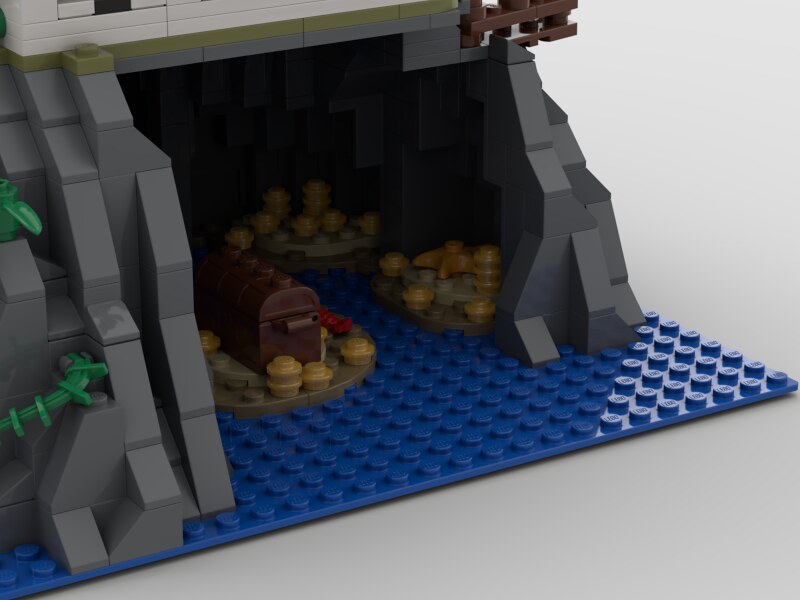 The hole here is big enough to get your hand in for play in the cave. 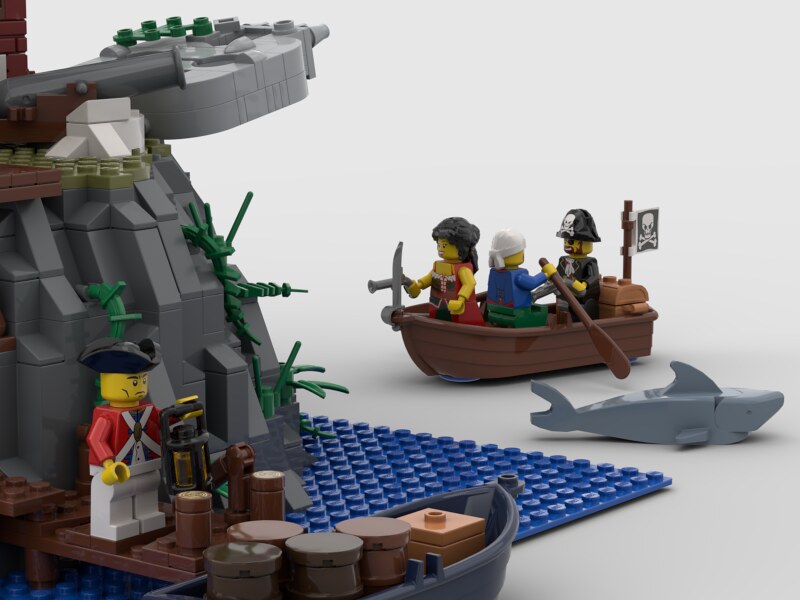 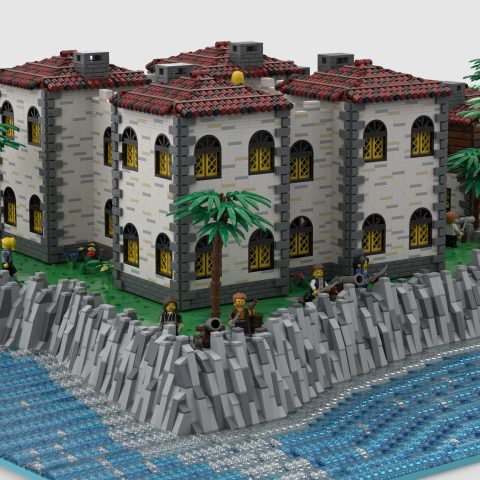