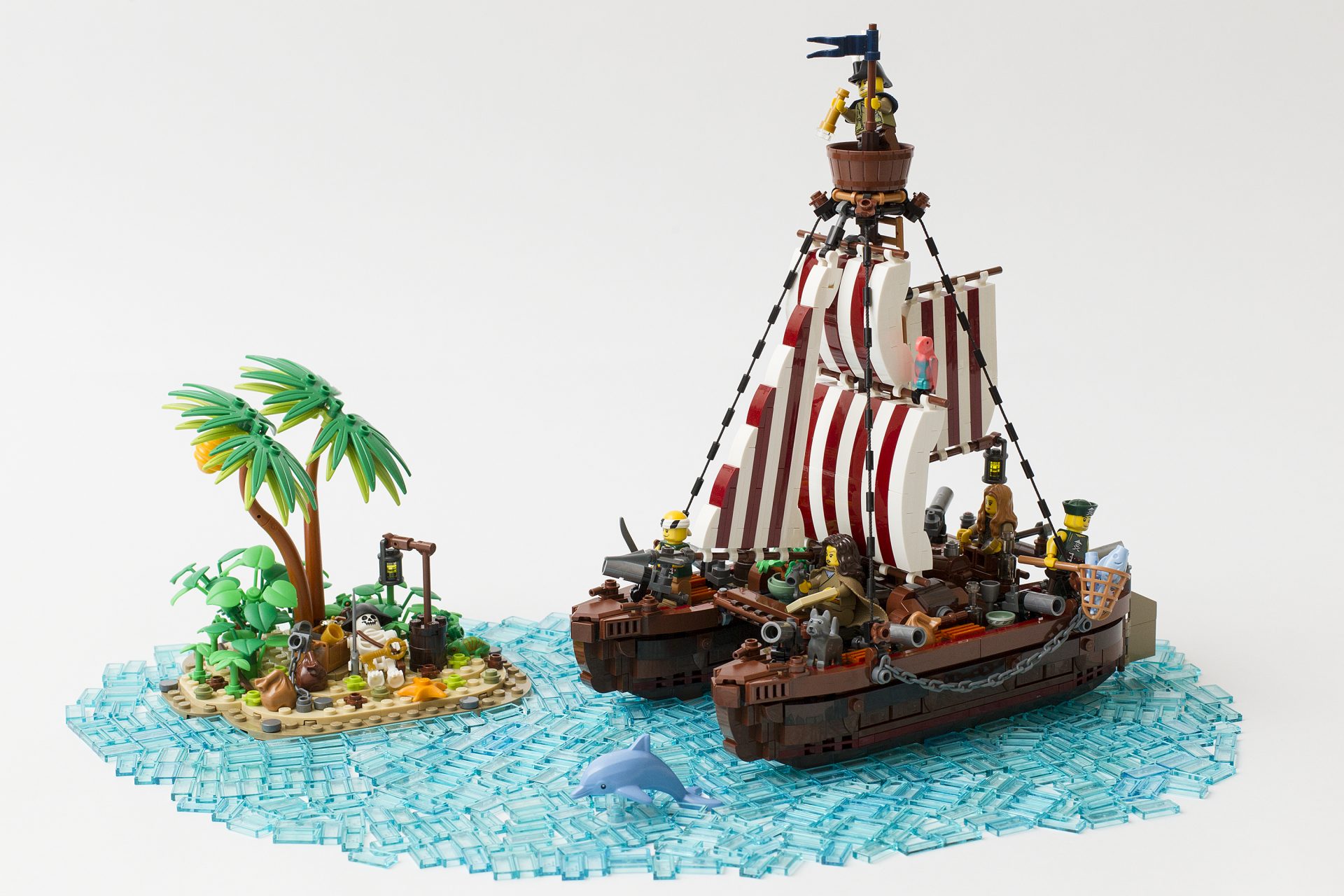 Usually Pirates prefer to cruise around the Caribbean in ships. Not large ships like frigates, mind you (unless they’re insane like Edward Teach), but much smaller vessels like sloops and cutters.

Historical accuracy out the window, Koalayummies, decided to break that stereotype and build a catamaran for his pirates. It’s a robust craft adored with traditional LEGO-inspired red and white striped sales, and if you take a closer look you’ll observe its armaments. Yes, sneaky cannons protruding for all directions to give potential threats an untimely blast.

The pirates appear to be sailing to a small island upon which an unfortunate sod has bitten the dust! He appears to have some loot (or is that birdseed in those sacks) and a mysterious key.  What does that key unlock? Koalayummies has not revealed the answer so it’s let up to your imagination… 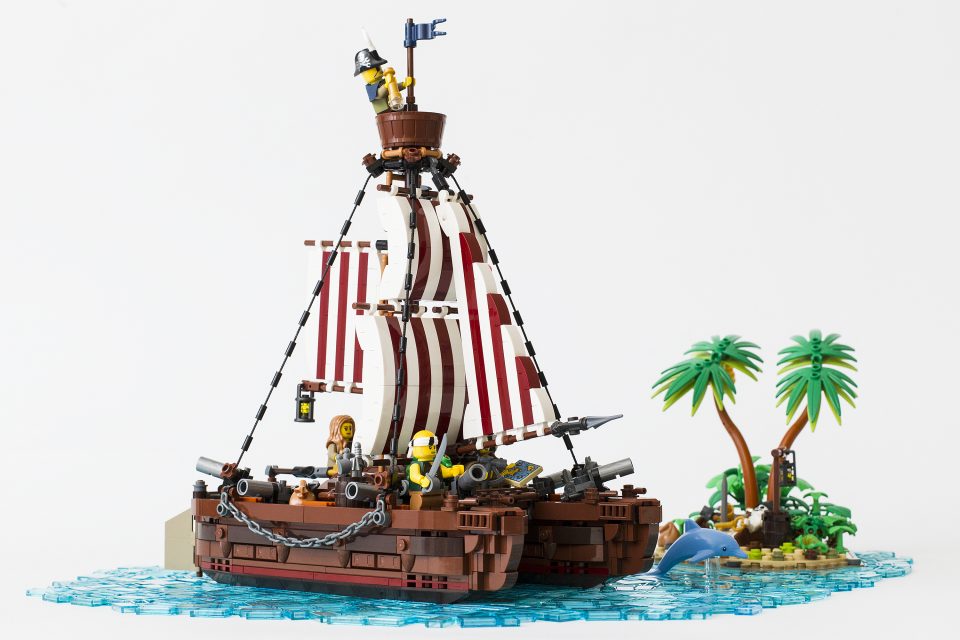 Look out Indigo Islanders! The Pirates now have a superior catamaran! 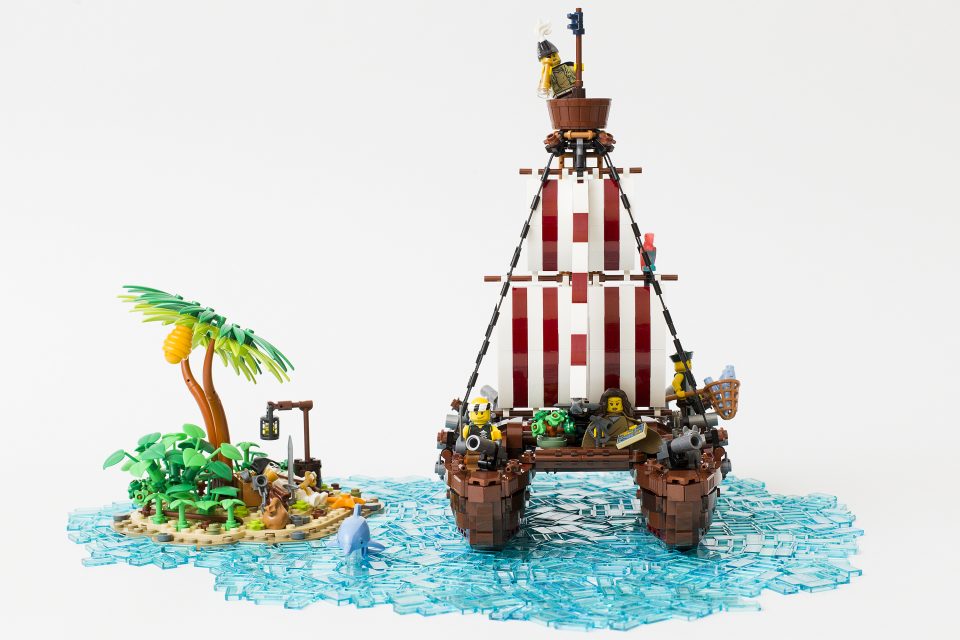 The privateer catamaran is sailing straight towards us!
Oh look, a beehive!

Well, that’s a bit brief, but going by that description we assume these pirates are commissioned by a naval empires… and also have rogue tendencies. Well, what you consider a “privateer” is a matter of perspective, isn’t it?

As the old saying goes: “One nation’s privateer is another nation’s pirate”

Ok, so we just made that up on the spot. 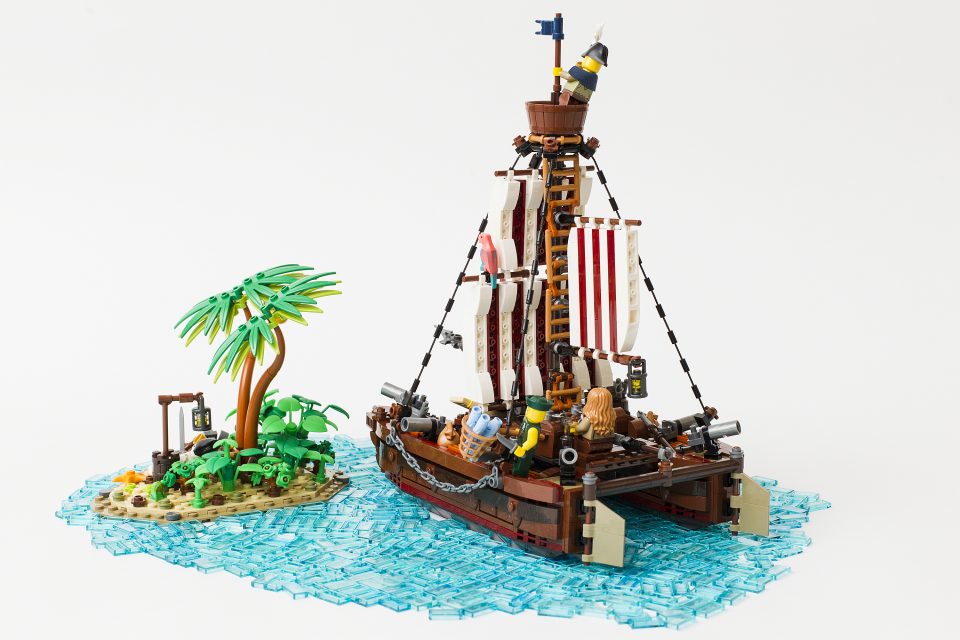 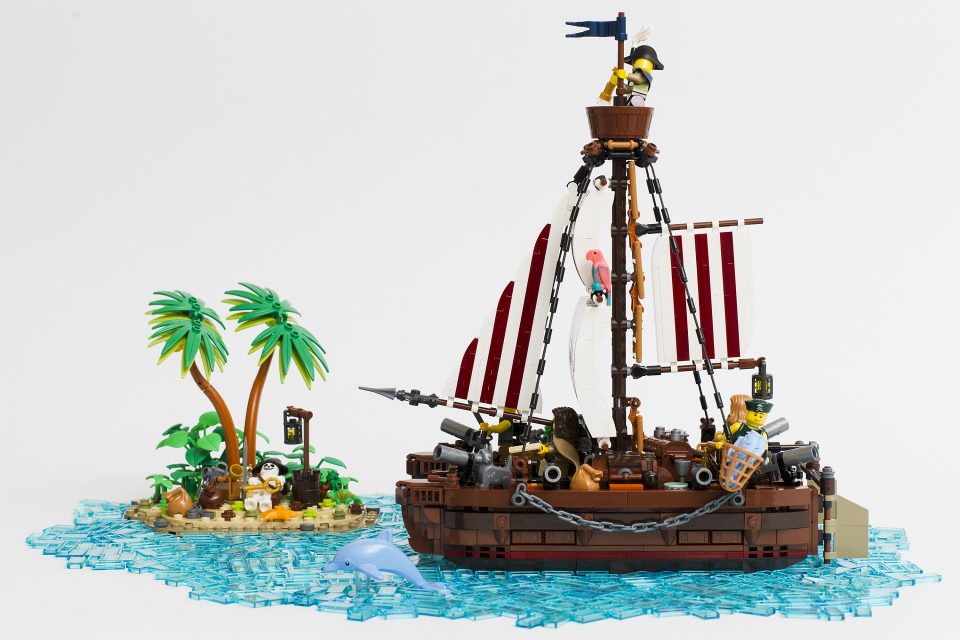 Is that spear and chain on the side giving out “Waterworld” vibes? 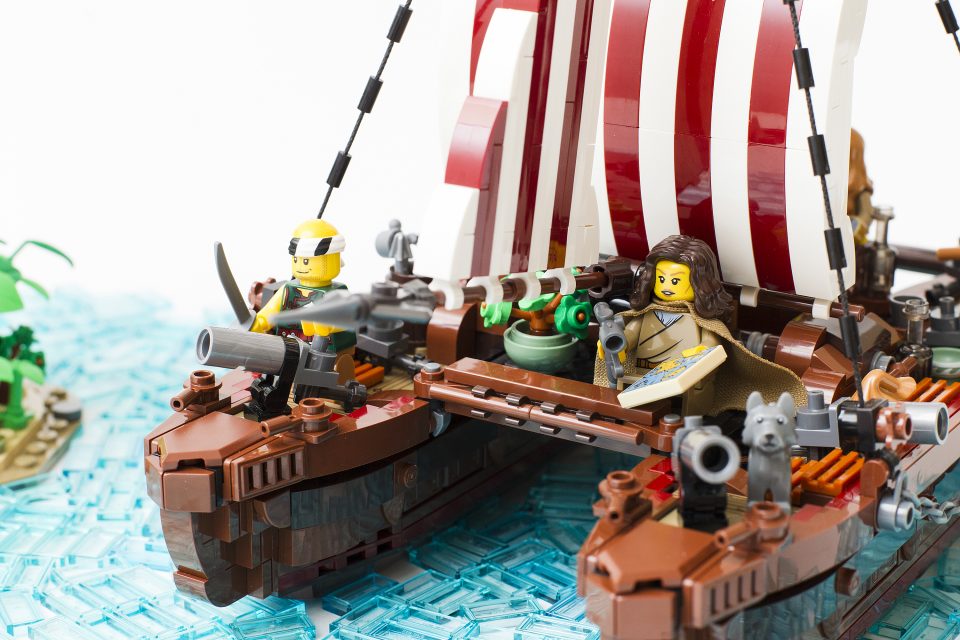 Koalayummies has packed a lot of detail into this build 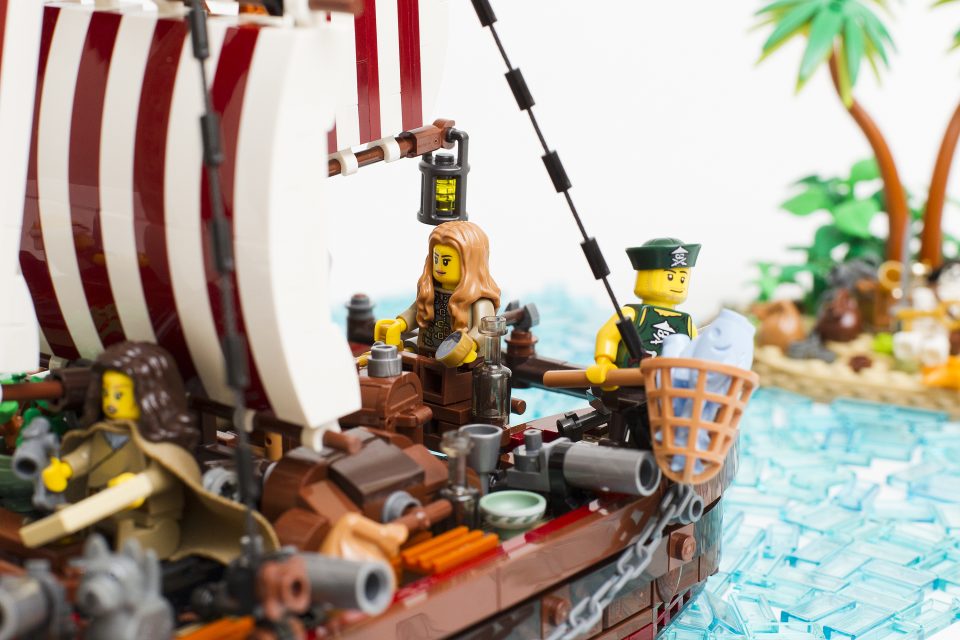 The minifigures are quite unique, certainly not the traditional combinations 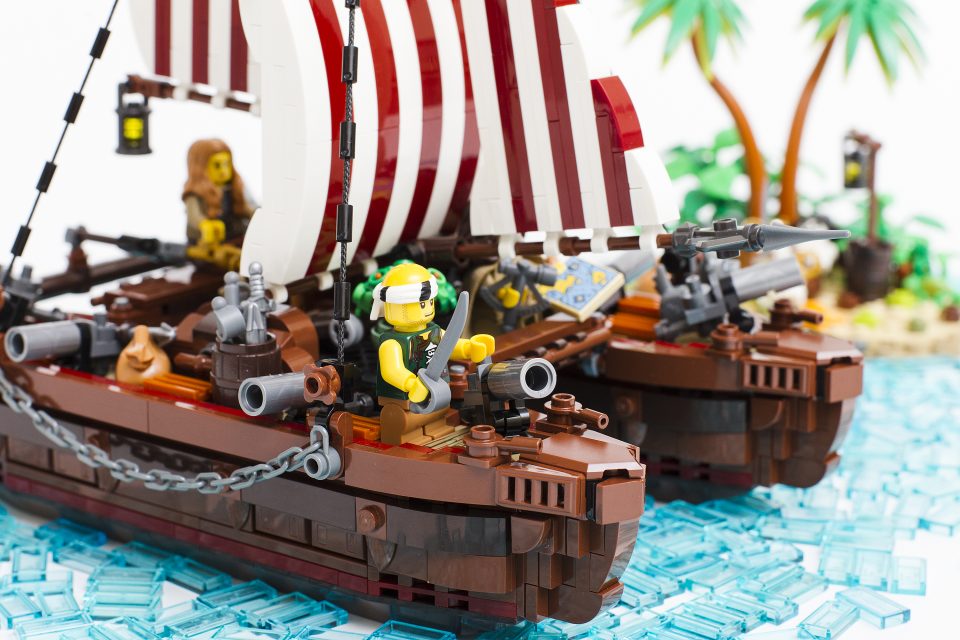 Well armed with swords, a spear and guns. Watch out! 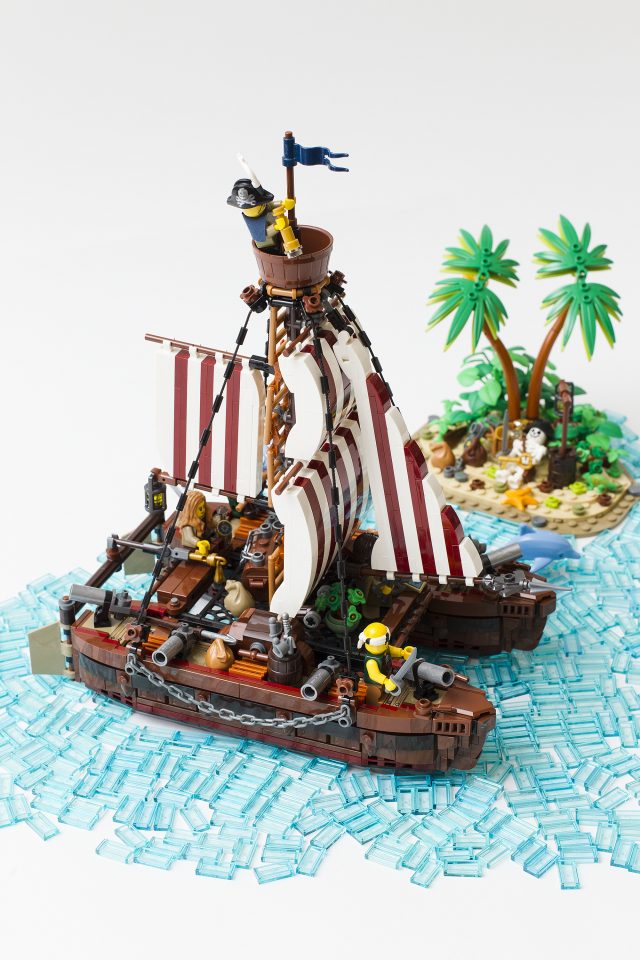 A Closer Look at the Catamaran 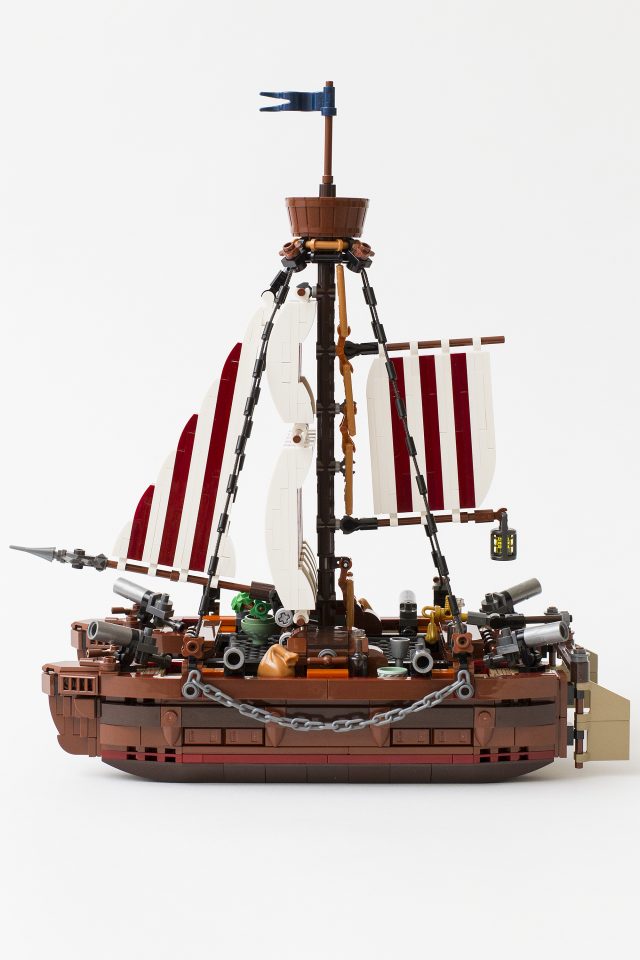 It looks quite sturdy, doesn’t it? 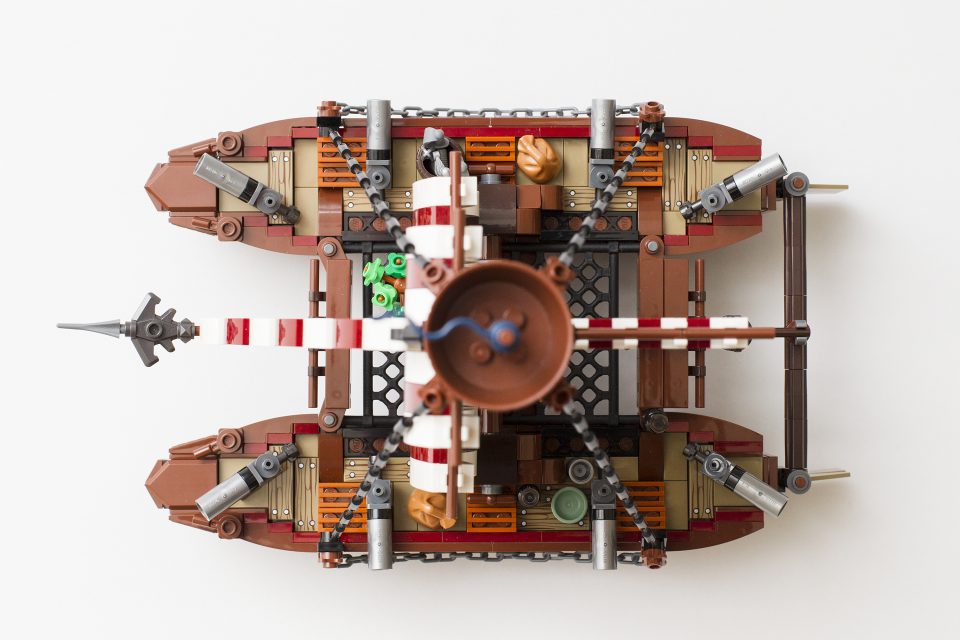 Perfect symmetry – everything lines up nicely!

Before Ray the Castaway built his shanty, he did the typical marooned SOS thing and wrote “HELP” on the beach in big stone letters. His heart pounding with fleeting hopes of plane flying overhead would somehow find his rocky scribble legible enough to land (somewhere?) and pluck him from uncertain fate… and lack of WIFI.

Note to author: Pirates of the Caribbean didn’t have planes or WIFI. Yer dork! 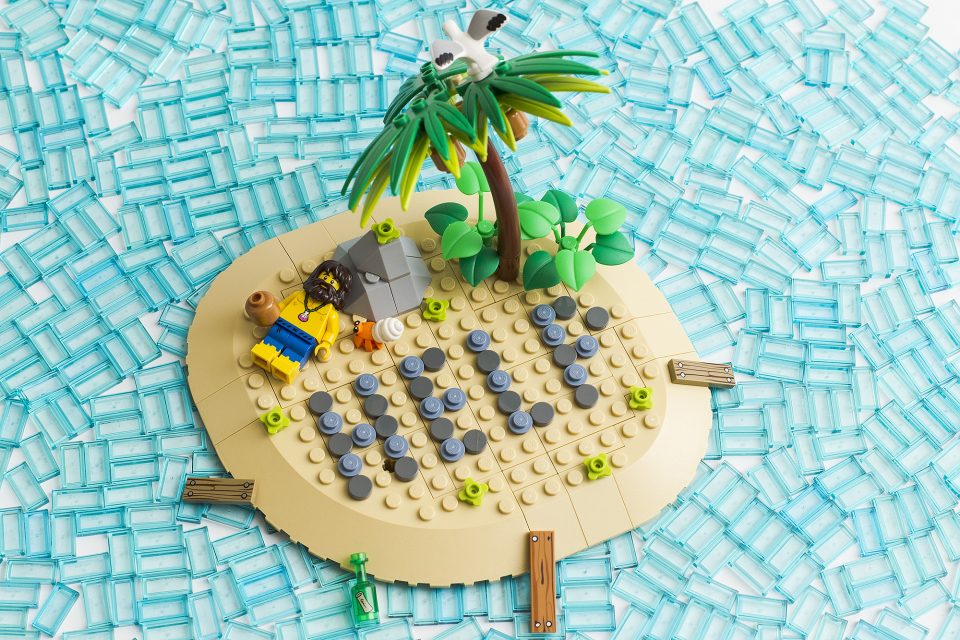 That’s not very easy to read, is it?

But seriously, this is a fine little vignette Koalayummies whipped up in early 2021, a good 18 months after he first posted his catamaran.

The two MOCs are probably unrelated but let’s pretend the pirates will set sail to the castaway’s island next.  Not that it has much offer except for a delicious crab, a half drunken coconut and a shopping list someone accidentally left in a bottle.

Koalayummies is a delicious marsupial from Australia who one day shared his creation in the LEGO Pirates MOC Subforum… and then never returned to tell us more about this catamaran or what that key unlocks.

What we can deduce from the photos he provided, he has a Flickr account in which he shares a variety of creations. There’s a couple more pirate themed MOCs among them but he’s got a rather eclectic selection of builds, ranging from Ghostbusters to mutant dolphins walking on two legs. Yes, really.

And now the time has come for you to head over to the LEGO Pirates Forum and share your thoughts on this catamaran with the Classic Pirates. Or share to your hearts content on social media using the  buttons below. 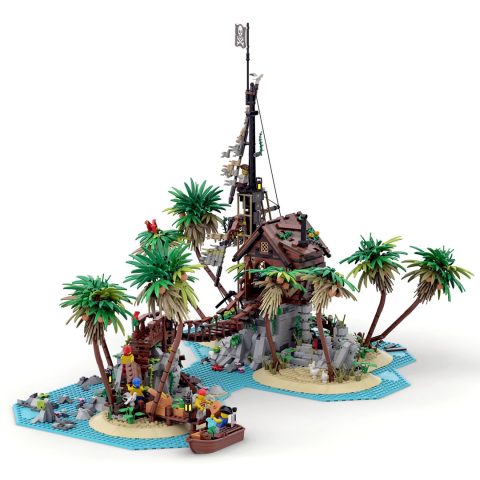