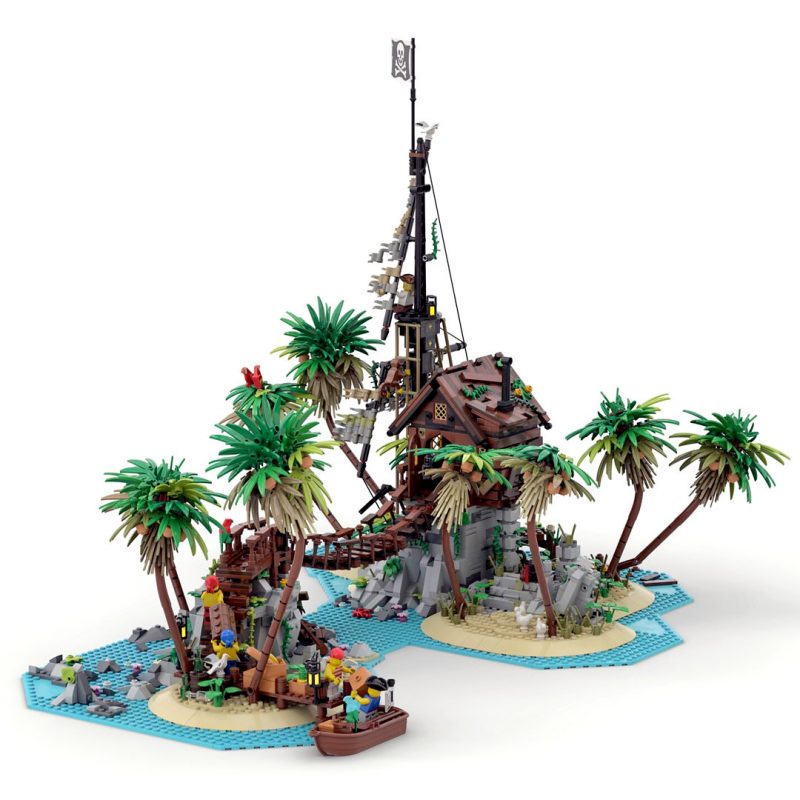 Forbidden Island… what a place! We returned there not so long ago to discover the Indigo Islanders had laid claim to the island… but that was merely one continuity in the LEGO Pirates multiverse.  In this continuity we ponder; what if the classic 1989 LEGO set, 6270 Forbidden Island was reimagined in the style of the more modern 21322 Pirates of Barracuda Bay?

Well, Elusys Ra Arwal has the answer. He’s created a glorious digital rendition of the set utilising the modern aesthetic,  packed with details in beautifully rendered images. There are also a few innovations to keep things fresh, like a hidden temple, treasure cave and Islander moai. 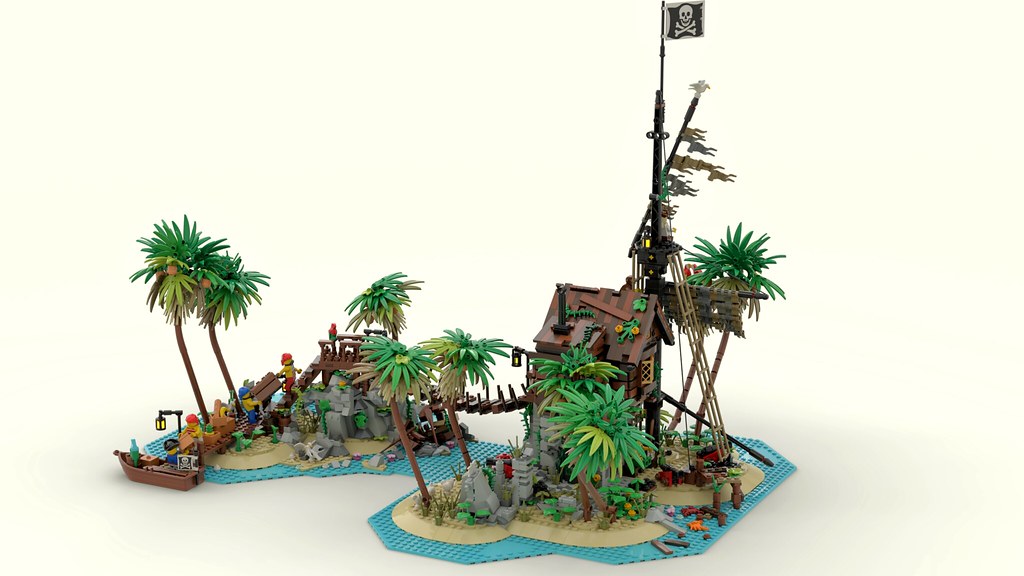 Following the new pirates of Barracuda Bay style, with my own twist on the amount of details and techniques employed, I tried to update that set, restyle and expand it. I added some natives structures like in the bay, a bridge, lookout mast and a small cave where some chests are stashed. There’s a prison with a bluecoat skeleton, some cannons and a shack, were pirates can plot their new plunder. 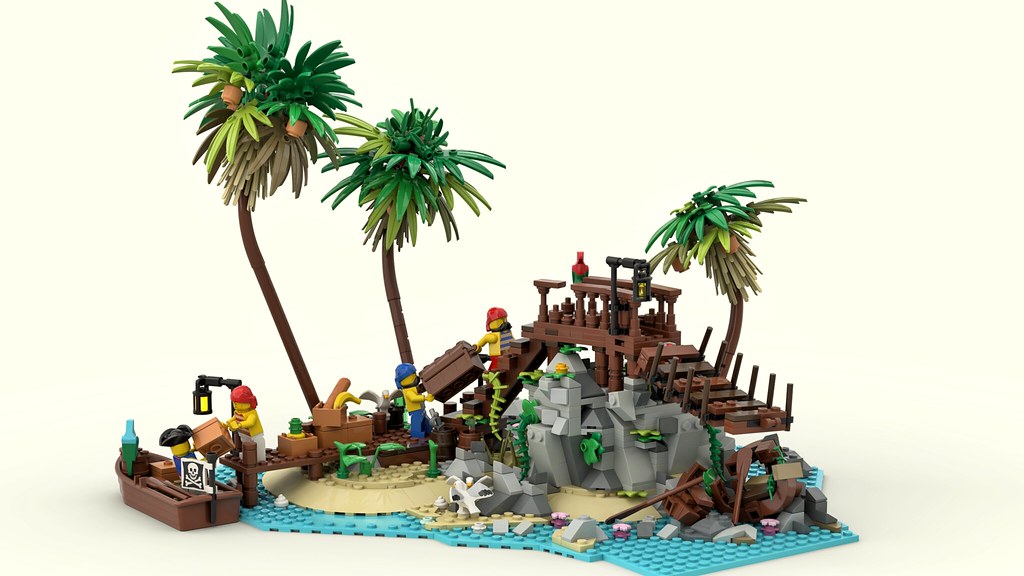 From here there’s a clear view of the dock and the crew unloading their loot. On the right side, underneath the bridge, there’s the wreck of a small dinghy. 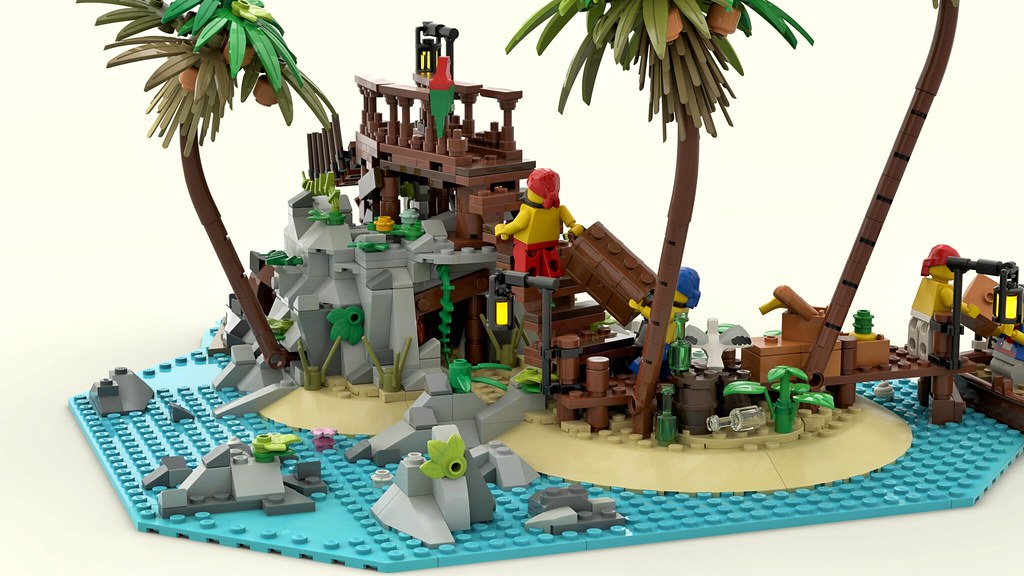 From this perspective, underneath the bridge, there’s a small cave where a couple of chests are hidden away. 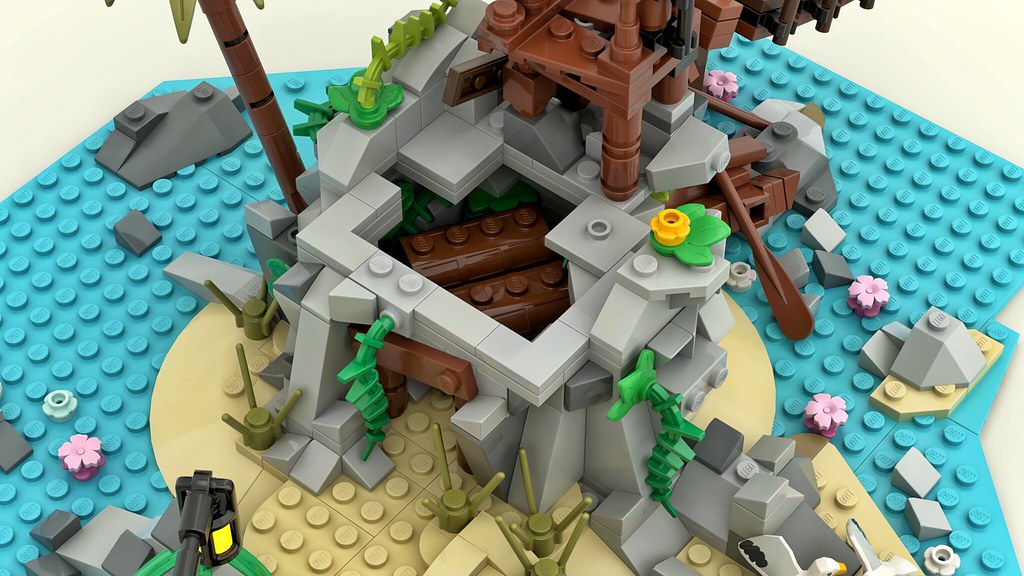 This is the interior of the cave area. 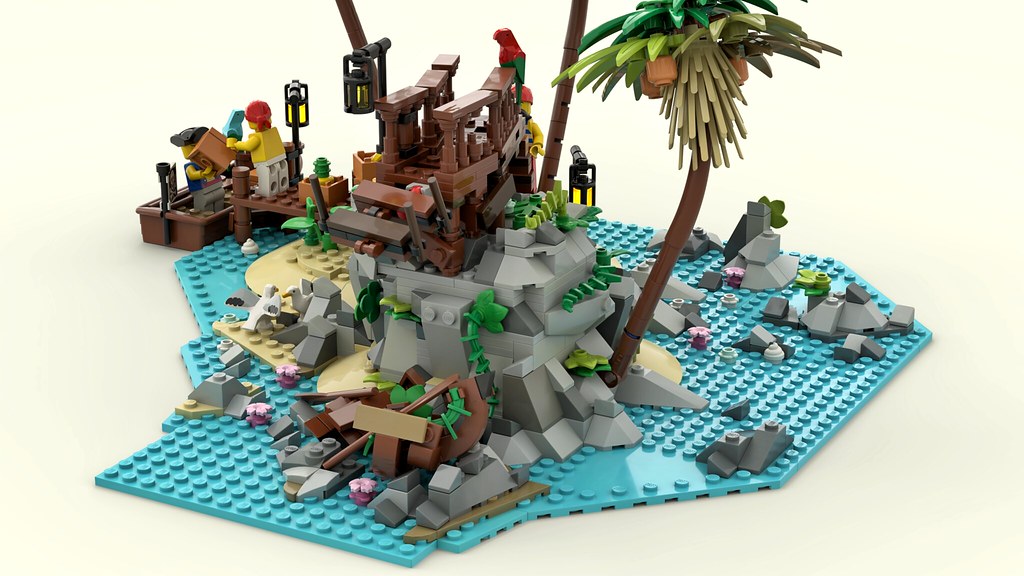 Here, front and center, you can see the wreck of a dinghy with its oars in the carcass of its hull.

View of the back of the main island. On the left side, now overrun by plants one can still see the entrance and floor of the old temple, of which the scattered stones were collected and reused to build the prison and on top the wooden structure. 3 cannons protect the building. 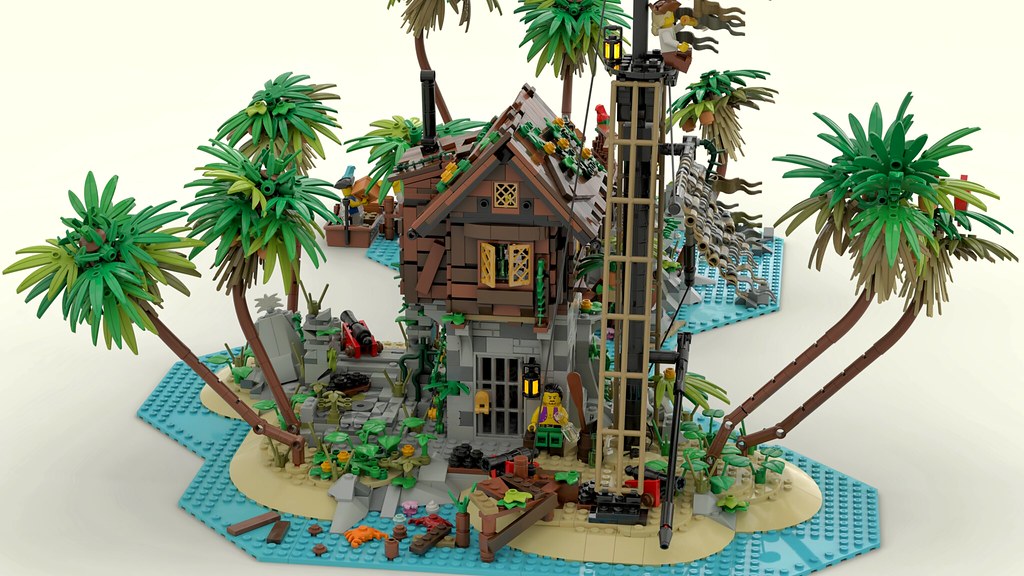 One can even still see the remnants of the old pier that gave access to this section of the island. 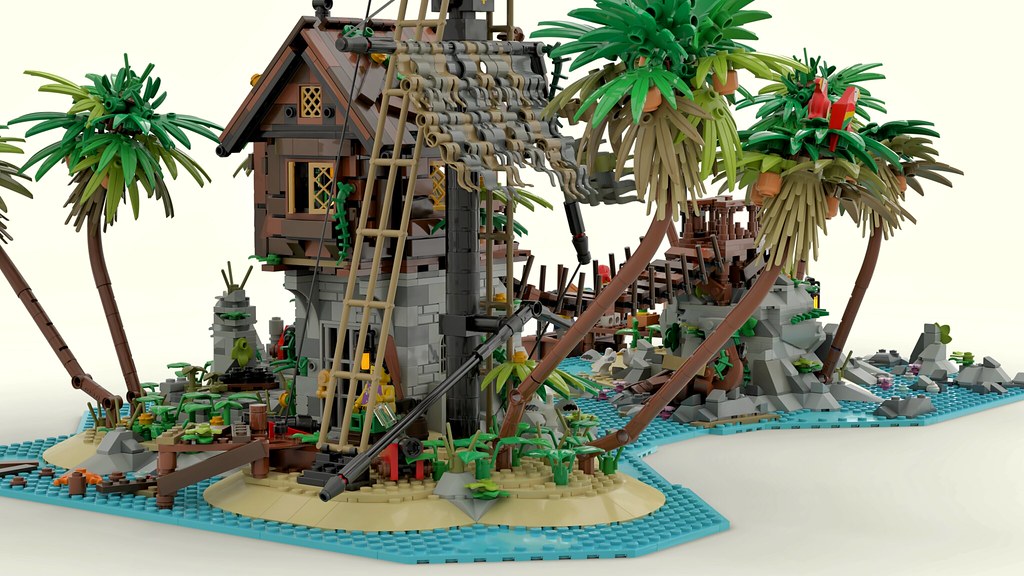 View of the main structure with a prison underneath and a shack made out of reclaimed pieces of a shipwreck. Its main mast used as a lookout place, and 3 cannons guard the island and its inhabitants. 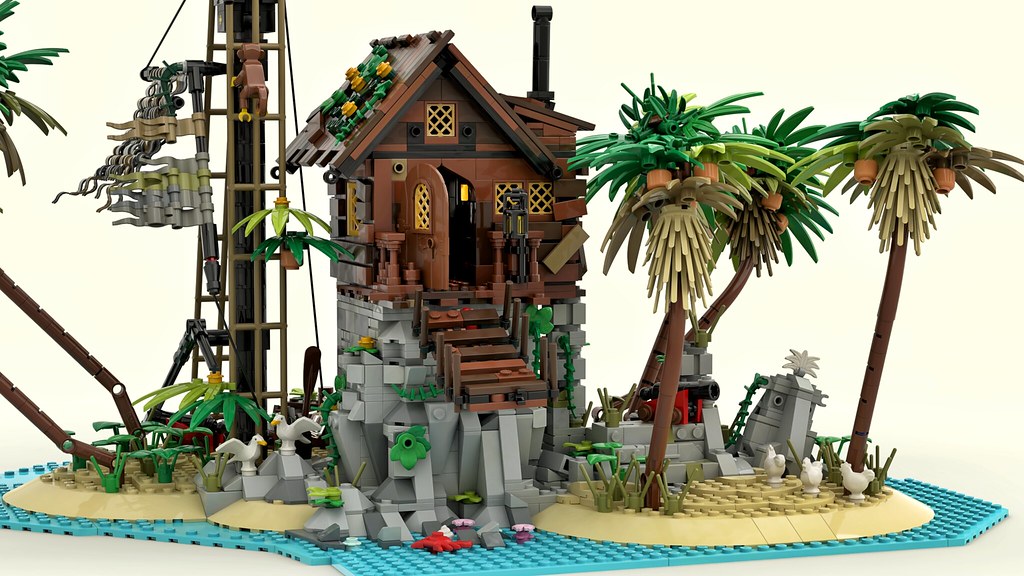 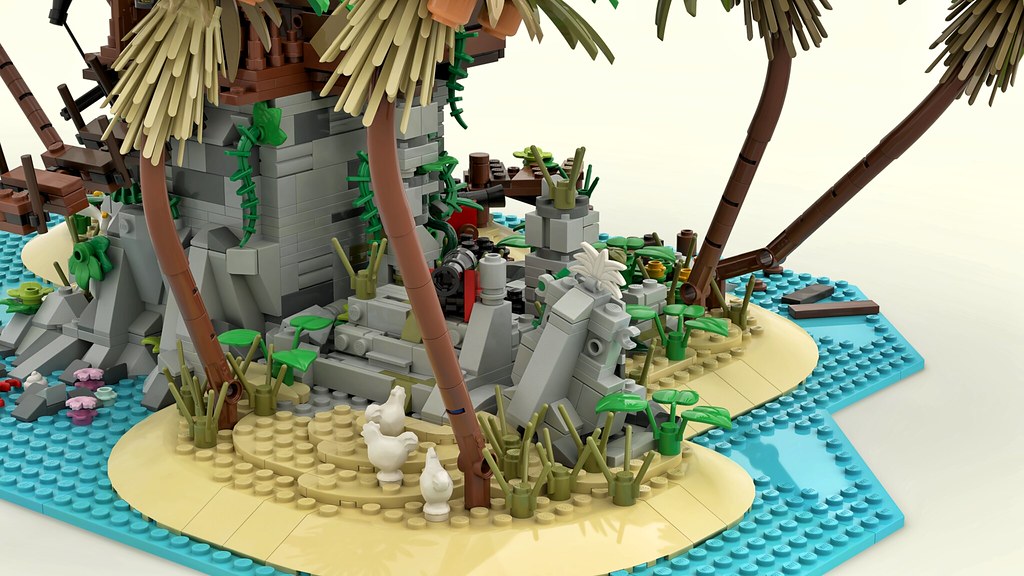 Here you can better see the remains of the temple and its statue. For this purpose I chose the other style just because it looks more ancient, almost like Easter Island statues. 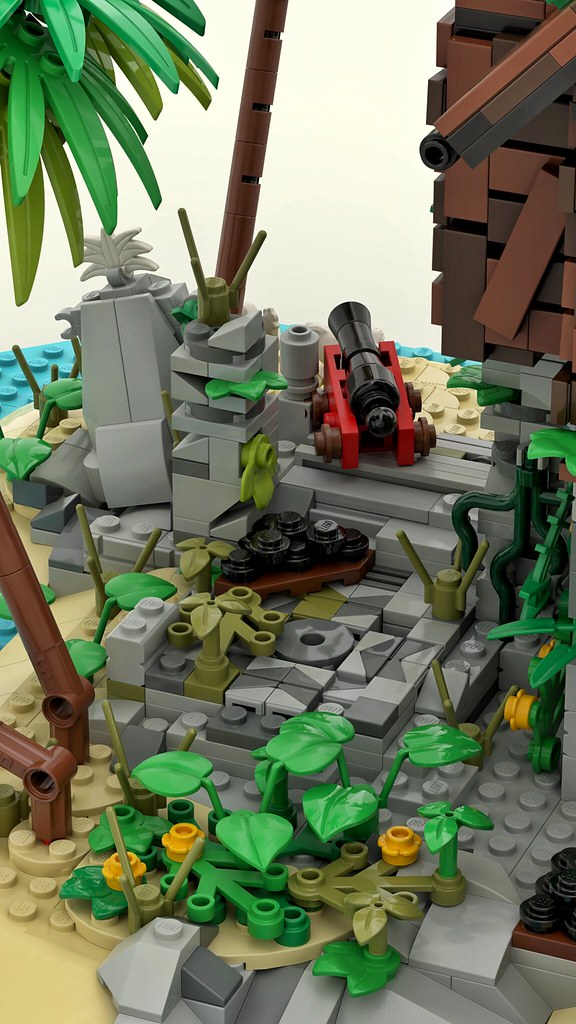 Here there’s some better view of the details of the temple’s floor. 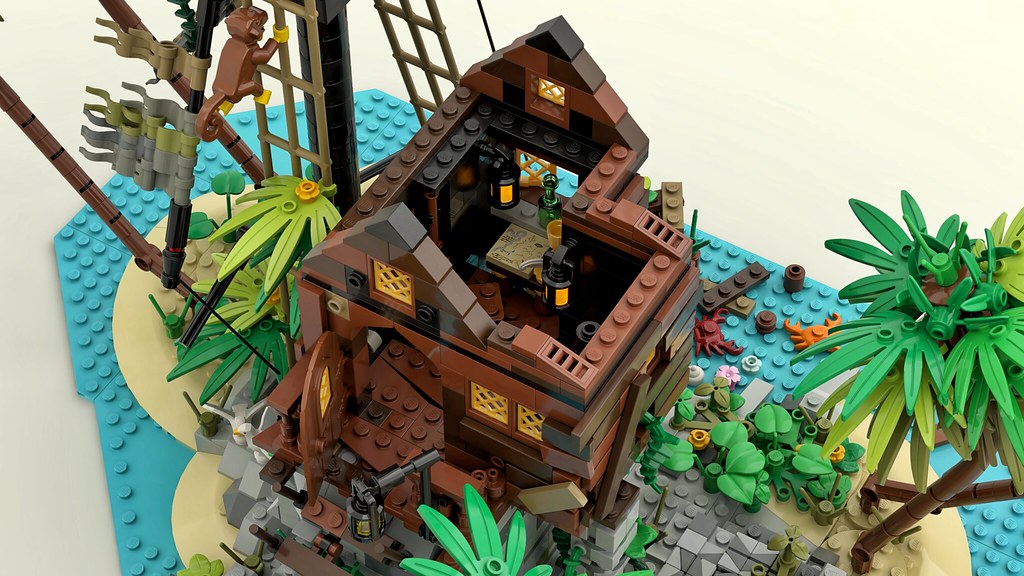 View of the interior of the shack with weapons, table with map and lamps. 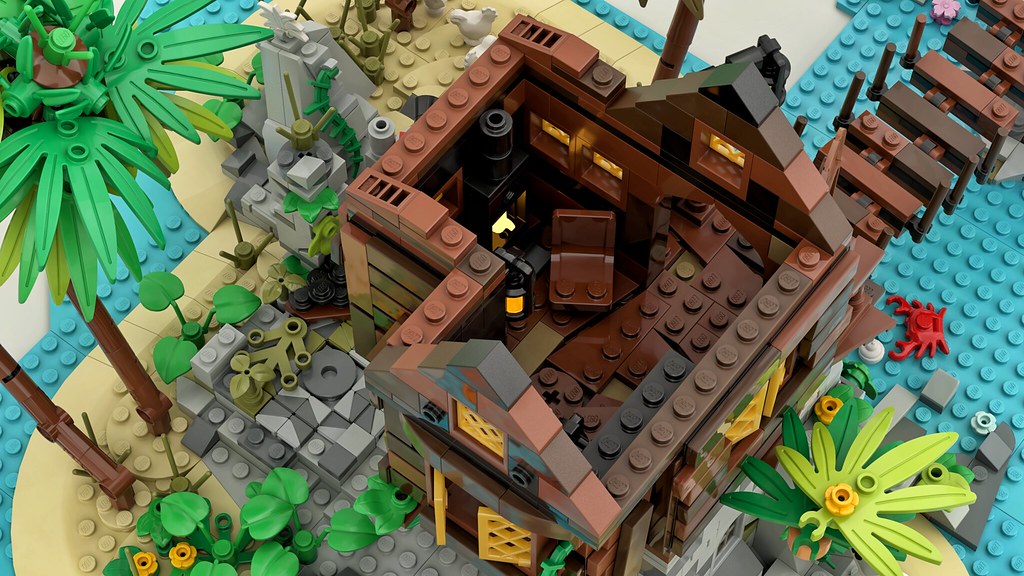 The other side with a view over the fireplace. 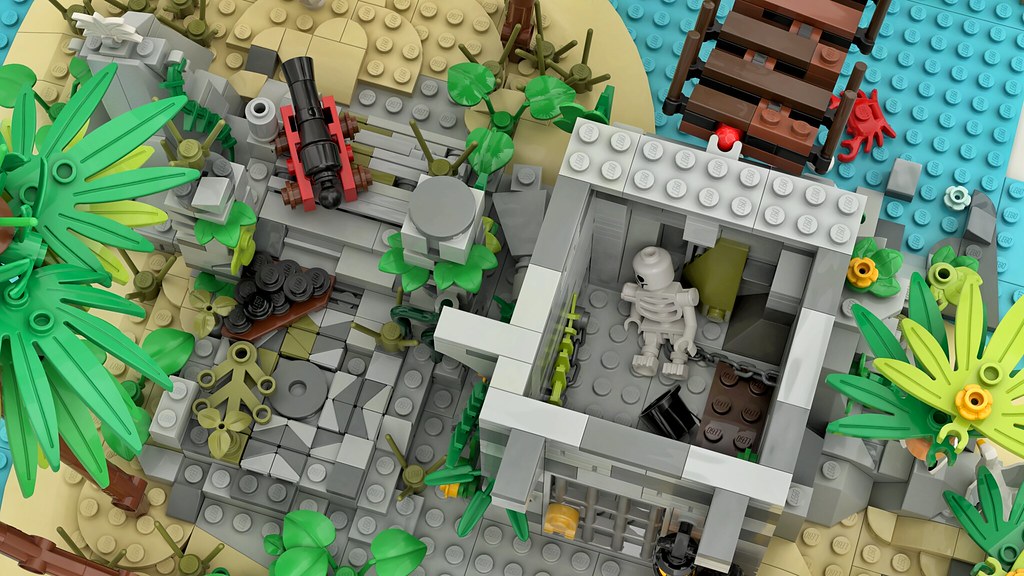 Interior of the prison, with bluecoat skeleton, wooden bed and chains.

Elusys Ra Arwal (or Guglielmo di Napoli as the high ranking officers know him) has been spotted in the LEGO Pirates Forum on numerous occasions. He has a penchant for remastering classic pirate sets in digital form, so if you like the combination of the two, explore his Flickr stream for Pirate MOCs. 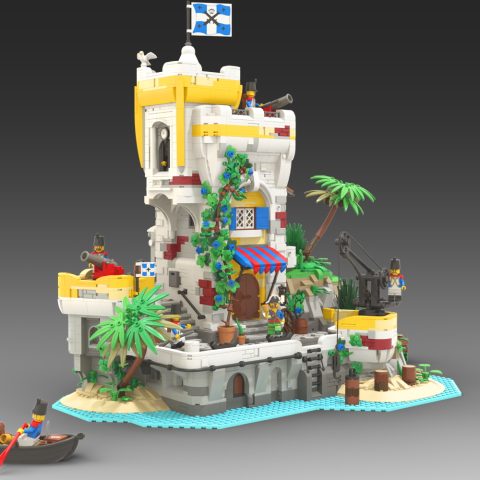 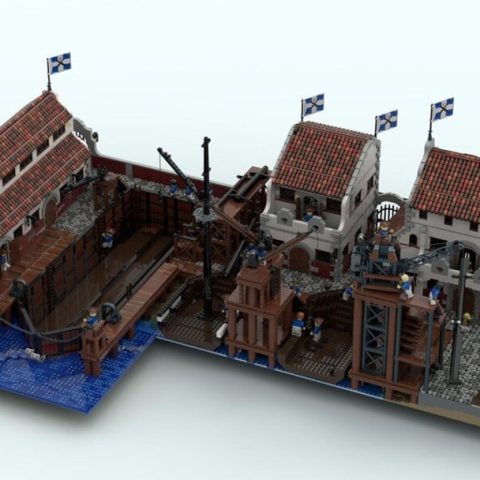