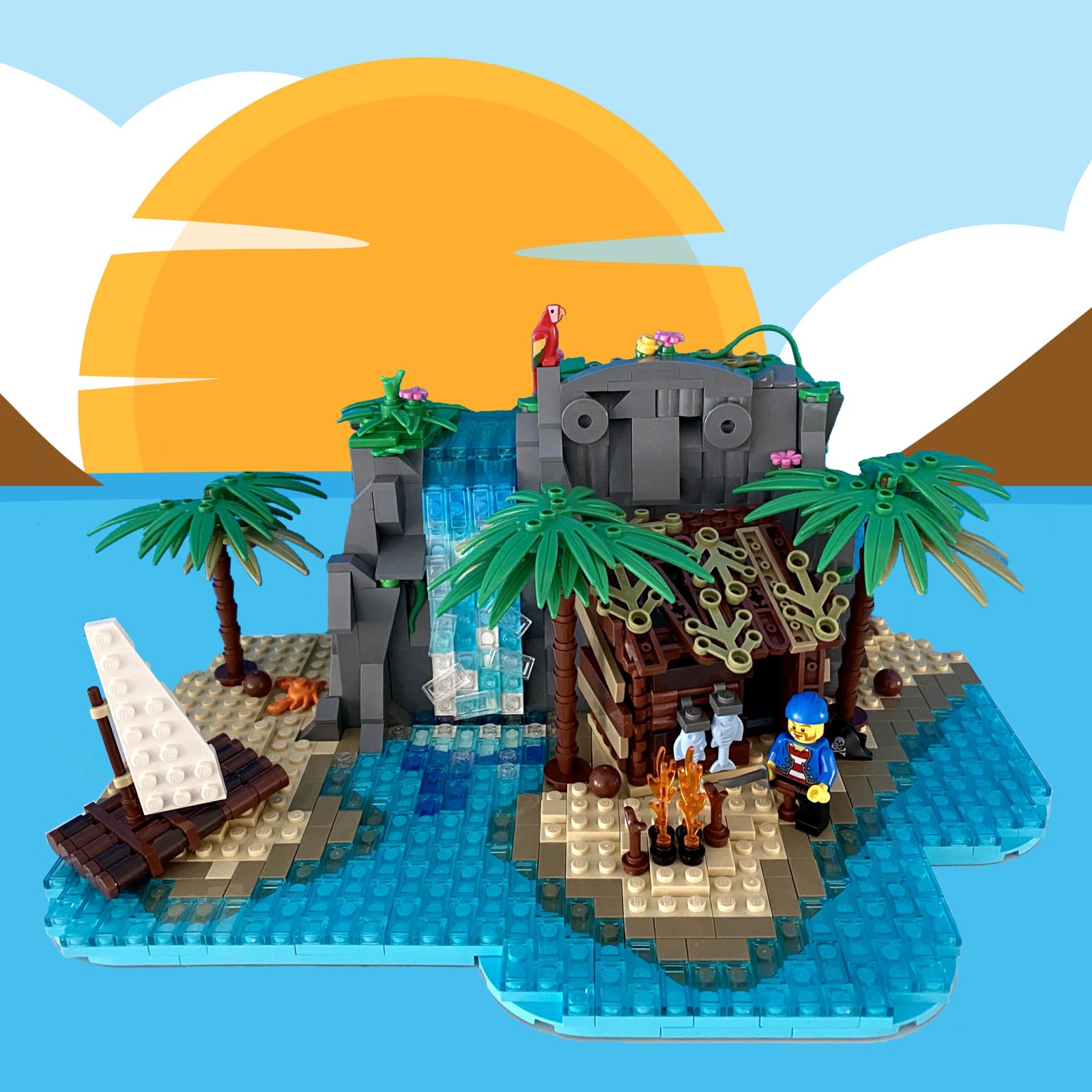 Some people want a mansion, a yacht, and lots of money… others want a small hut on an tropical island away from those people. The right choice seems almost self evident, right? More wealth means more happiness, ergo we go with the yacht people, end of that discussion. However, many great thinkers disagreed and had something clever to say about it.

Plato began ‘The greatest wealth is to live content with little‘, Seneca followed ‘It is not the man who has too little, but the man who craves more, that is poor‘, and Kant drove it home ‘We are not rich by what we possess, but by what we can do without‘.

Hmm… a tough crowd to argue there… if only we had evidence to the contrary. But wait, what do we have here?

In his second pirate MOC named Island of the Lost, the master builder, CJTonic, explored this dilemma through Captain Bluejack who was unfortunate enough to have tasted both worlds. Let’s read about his story and, just maybe, become a little wiser in our own pursue of happiness and wealth. 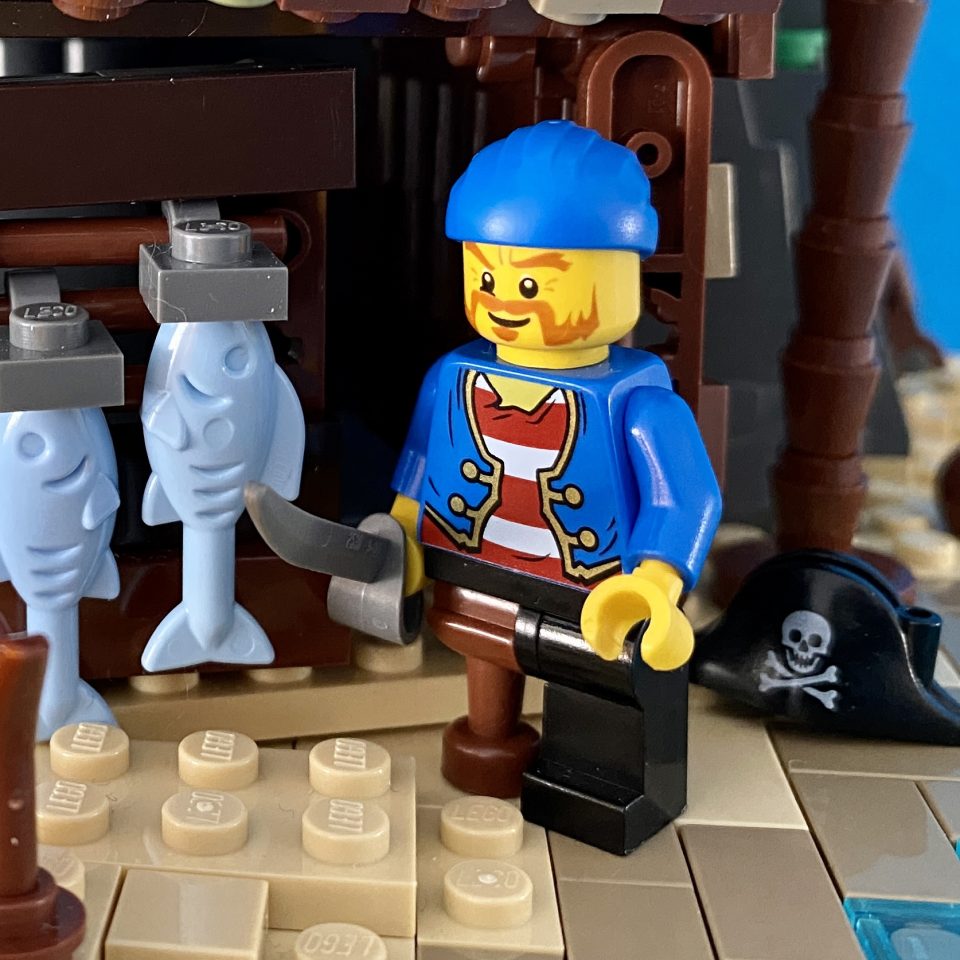 Meet Captain Bluejack, the protagonist of the story

Island of the Lost MOC was created as Christmas present for my daughter, and it seems as if it was a success so far. Time to post some pictures here in the heart of the Classic Pirates community.

Let me introduce Captain Bluejack to you. This MOC is all about his story and his current life.

Bluejack was once the captain of the Golden Mermaid, one of the most successful pirate ships in the Caribbean, and for a brief period he was considered to be the wealthiest pirate captain ever known. But he overdid it. He pushed the crew too hard, always in search of that lost legendary treasure. And what do you get for pushing the crew too hard? That’s right, a good old fashion mutiny!

While building MOCs it is easy to go overboard and build an impressive 5k+ pieces creation… but often the true builder’s talent shines when he achieves more with less (like here).

Equipped only with his wits and a cutlass, he was banished from the Golden Mermaid on a small raft and left to die from thirst or drowning on the open sea. But destiny had other plans for Bluejack as the wind brought him safely to a desert island known better as Island of the Lost. 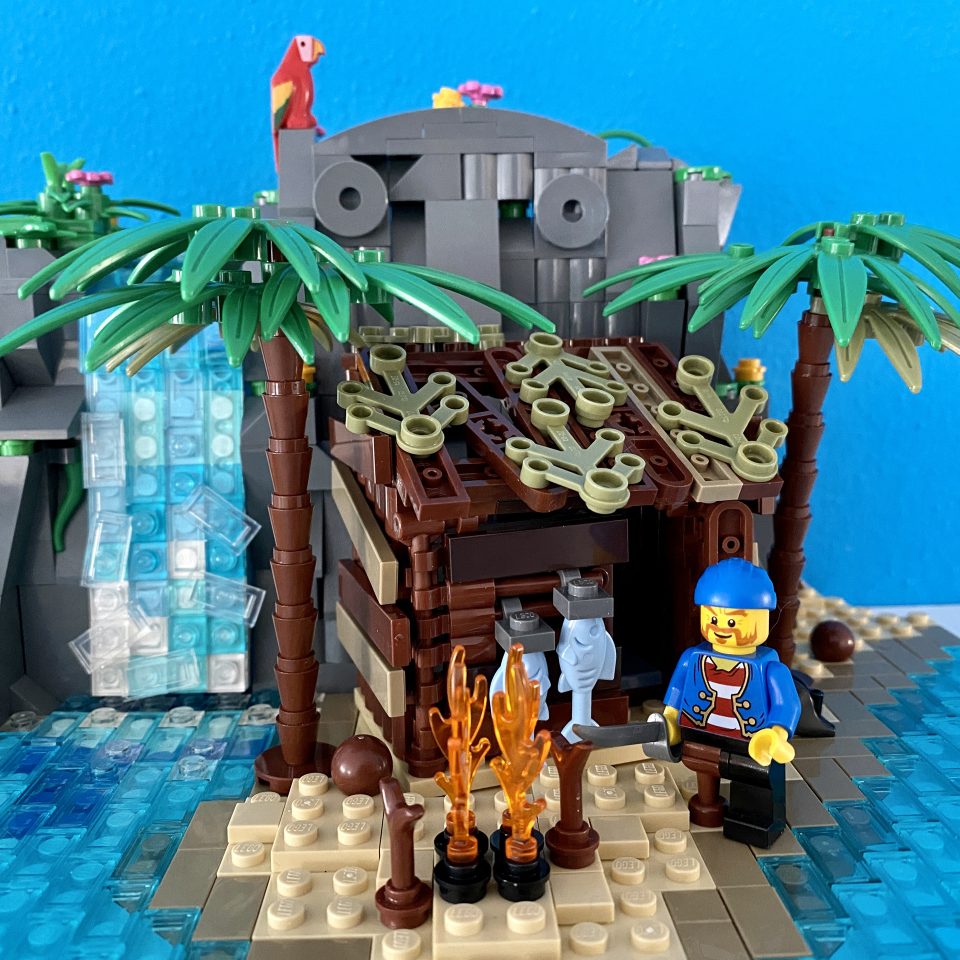 Not exactly a ‘small’ MOC by the LEGO standard (but not too large as well), the build consists of 1055 parts whose investment paid off with enormous amount of playability.

Once on dry land, Bluejack immediately switched into survival mode. He built a small hut from the driftwood he found, and was delighted to discover that his fishing skills from youth were still quite useful. He explored the island north to south, east to west. He even dared to climb highest peek of the island where he found a red parrot and befriended her. He named her Wilson, for it is a good name for a castaway companion. 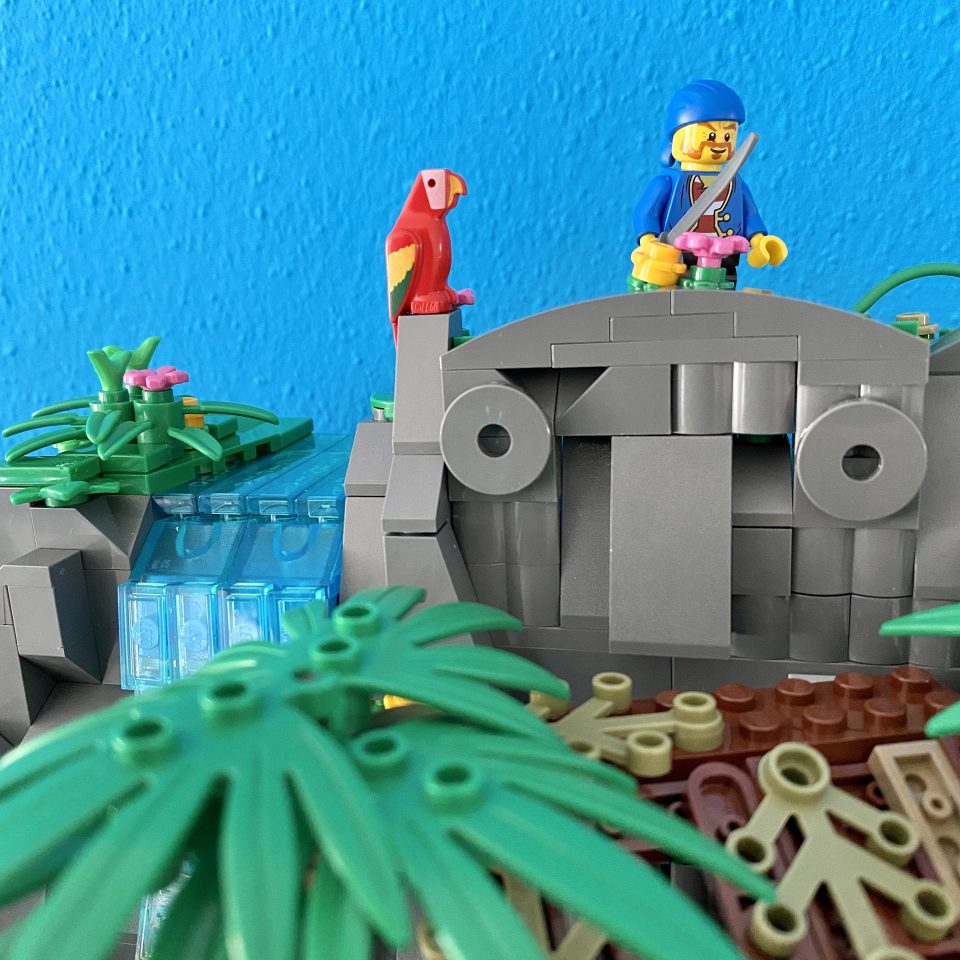 Marooning is the intentional act of abandoning someone in an uninhabited area, such as a desert island, or more generally to be marooned is to be in a place from which one cannot escape.

One afternoon, after his customary siesta, he noticed the fish he caught had disappeared… strange! By the evening he caught another fish and went to sleep. But when morning came, the fish was gone, again! This was not a coincidence, Bluejack thought. So he fished yet again, and when siesta came, he took his leave in the hut and snored heavily, but this time with his eyes wide open. Out of the blue, a thief appeared so Bluejack sprang after him. 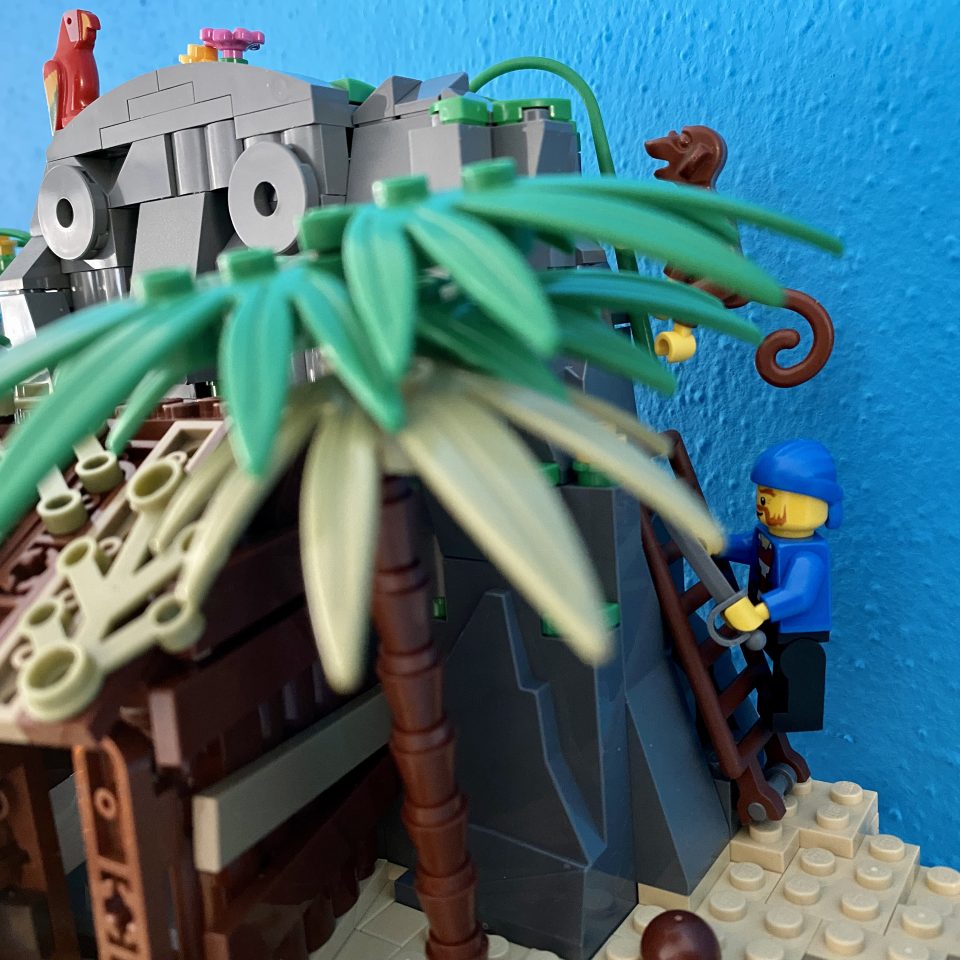 The pirate articles of captains’ Bartholomew Roberts and John Phillips specify marooning as a punishment for capital offences, such as deserting the ship or quarters in battle, or for stealing from other pirates.

It was Spinoza, a mischievous monkey who belonged to the infamous Captain Redbeard (until he got sick of his treacherous nature and decided to dump him on an island). Bluejack chased after him with all his speed, but the monkey was faster and dived headlong into a waterfall. The stupid monkey bashed his head right onto the rock, Bluejack thought. But no, the monkey was gone. Baffled, he took a step closer, and to his surprise he discovered that the beautiful waterfall wasn’t just a waterfall, but the entrance to a hidden cave.

The trans-clear 1×2 tiles in combination with 1×1 stud plates really do bring the waterfall to life. Superbly done!

What a scary place he discovered. The thieving monkey was cornered and trapped, but this was of little importance to Bluejack whose eyes were fixed on the ancient totem at the back of the cave. He wondered why the Islanders would make such an effort of carving a scary statue in the hidden cave, unless they wanted to intimidate and scare off accidental visitors. 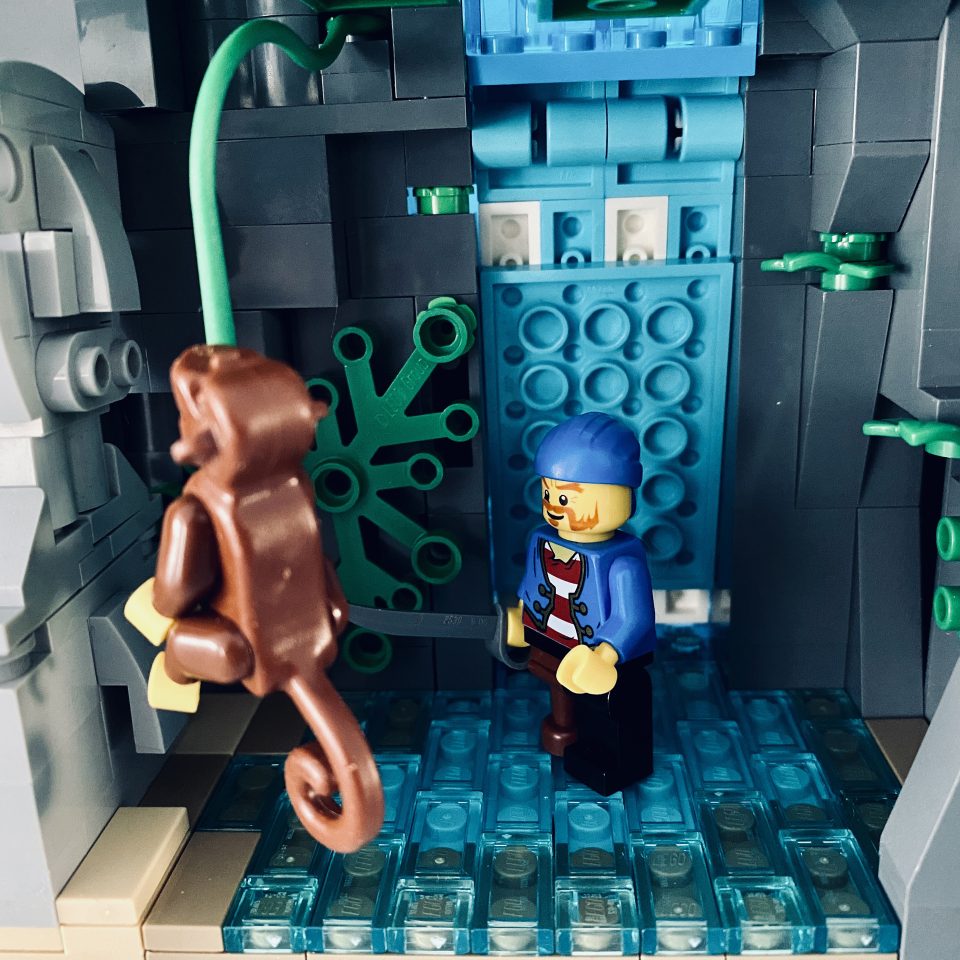 Here we see the interior of the cave just behind the waterfall where CJTonic maintained his high level of attention to details.

Always curious, always on a lookout for fame and fortune, Bluejack examined the ancient totem more closely and was not a bit surprised to find that the towering figure served as a door. A sudden rush of excitement washed all over him. He proceeded slowly, giving his eyes somewhat chance to adapt to the dark. A thought of going outside and making a torchlight flashed through his mind, but he quickly tossed it aside as the call of adventure was stronger than common sense. 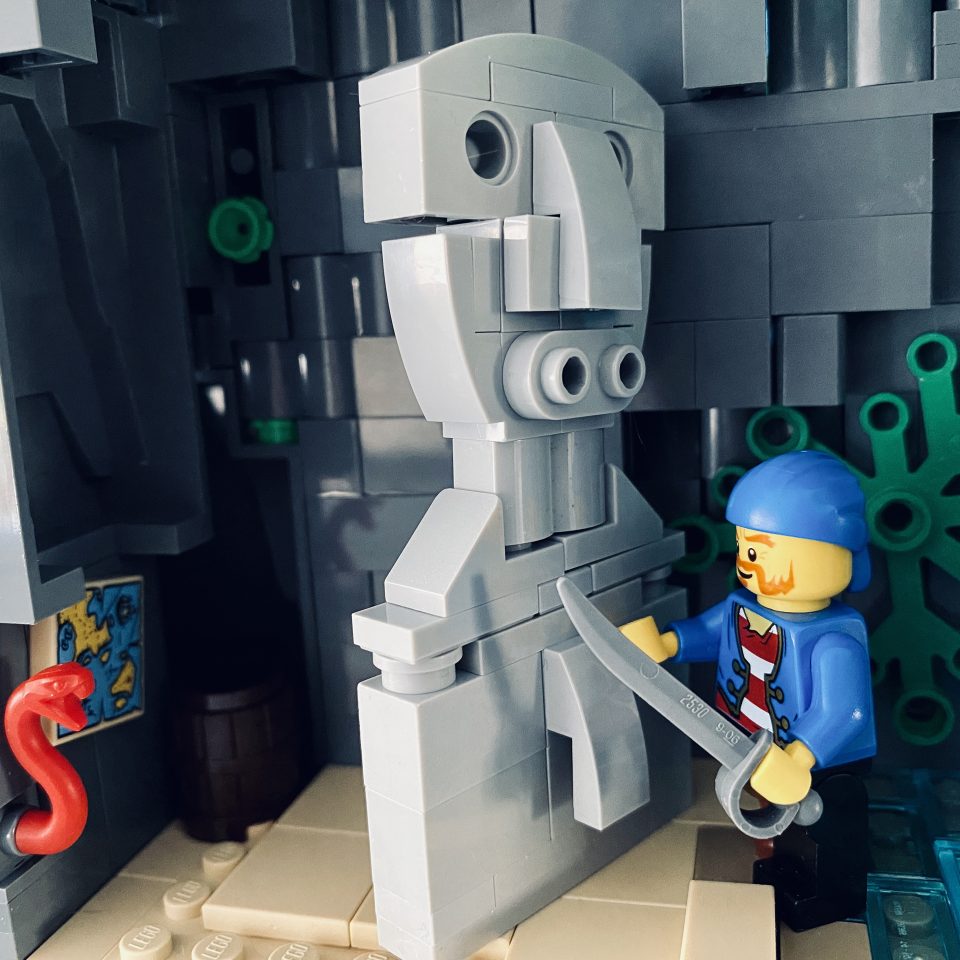 The scary guardian who failed miserably at keeping uninvited guests outside…

When his eyes finally adapted, Bluejack saw that the cave was much shorter than expected. No gold, no lost idols, only one empty barrel of rum and some worn out paper hanging on the back wall. Hugely disappointed, he reached for the paper slowly, but the sudden hissing sounds stopped him dead cold. Cascabel Rattlesnake, the most venomous pit viper found in Caribbean, was giving a clear message that no one would touch the paper… (that is, until someone chops its head off with the nice sharp cutlass) He reached again for the paper.

Would you believe that this whole set was designed over the course of two (2) intensive days, followed up with some minor ‘fine tuning’ afterwards… so what did you build last weekend???

Lo and behold, he finally found what he had searched for his entire life… the map to the legendary lost treasure! And all this time it was buried underneath a deserted Imperial Outpost, which he knew quite well since it served as the second home for him and the rest of the Golden Mermaid crew, now the mutineer crew. 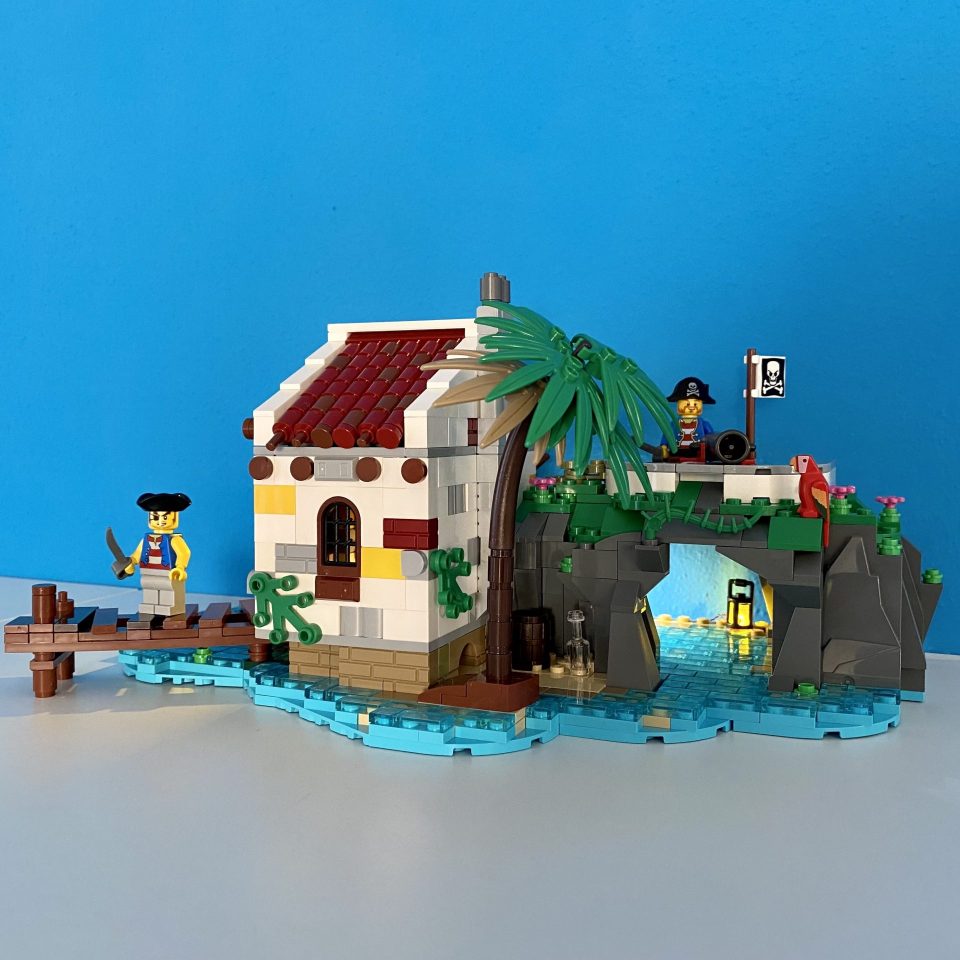 The Conquered Outpost where the treasure awaits… another fully packed 1000 parts MOC by the same builder. It is hard to say which one of these MOCs is better as they are both fantastic in their own way.

The hunger, the thirst, the itch that could never be scratched, all the insatiable greed came back with the prospect of the greatest treasure… and let’s not forget that little thing about the revenge Bluejack dreamt about on so many lonely nights. Old habits really do die hard… and now on this damned island he had to make a decision.

Should he stay in this tropical paradise and live out the rest of his days in peaceful solitude, or he should sail back into the world of greed, revenge and cruelty?

And here you have it, in case you missed it , the answer to our initial dilemma, and you can quote us:

“True wealth and happiness are not found in treasure or in absence of treasure, but in the pursuit of treasure” – the Classic-Pirates

Before we head on and wrap this nice little MOC with the About the Builder section, we just gotta know what will happen next!? Is he gonna leave this island and get his revenge and gold, or is he gonna stay and turn into a hippy nature loving philosopher?

Perhaps we’ll learn the answer to that in CJTonic next pirate MOC, but when will that be? Does he plan to build more Pirates sets? We posed questions like this during our unforgettable talk down in the Governor’s dungeon, and he replied.

I am currently working on a quite challenging Ninjago project again. But to be honest, I loved the Pirates stuff. They are a bit more light-weight than the Ninjago buildings and also always remind me of my childhood where LEGO Pirates were the big thing.

I guess I will come back to the Pirates topic and do another MOC. I am pretty sure I will do so…

Sorry to break it to you (CJTonic), but the LEGO Pirates are still the big thing! But we are generous so we forgive you, since you build such awesome Pirates MOCs!

Coming straight from the Baltic sea and right into our treacherous pirate waters, CJTonic is everything but the beginner when it comes to building beautiful and clever MOCs. He has a considerable crew of fans on Instagram and Flickr, where he regularly shares high quality photos of his newest creations. He also shoots videos, so be sure to take a glace at his YouTube channel.

If photos and videos are not enough, and you’re about to die to find out how he did it, then visit his Rebrickable account and take a good look at the instructions. You might learn a thing, or twenty two.

While we wait for the next installment of his Pirate saga (we still don’t have any clue about how Bluejack is going to escape from the island) please share with us your thoughts inside the LEGO Pirates MOC forum, or simply give us your two pieces of eight about this creation. 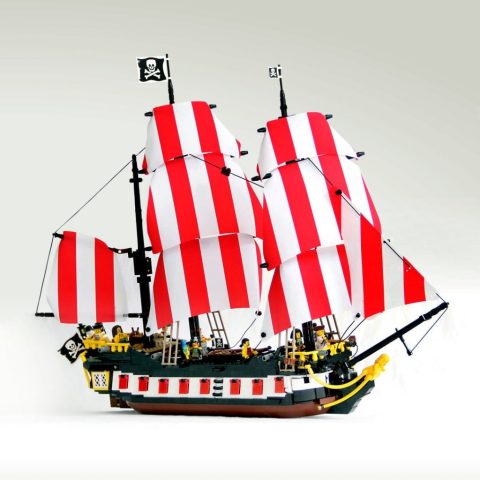 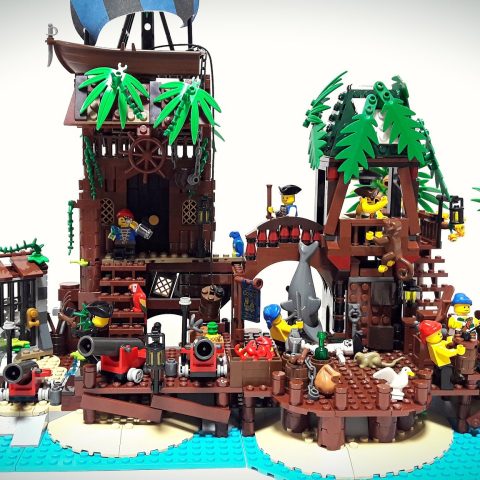