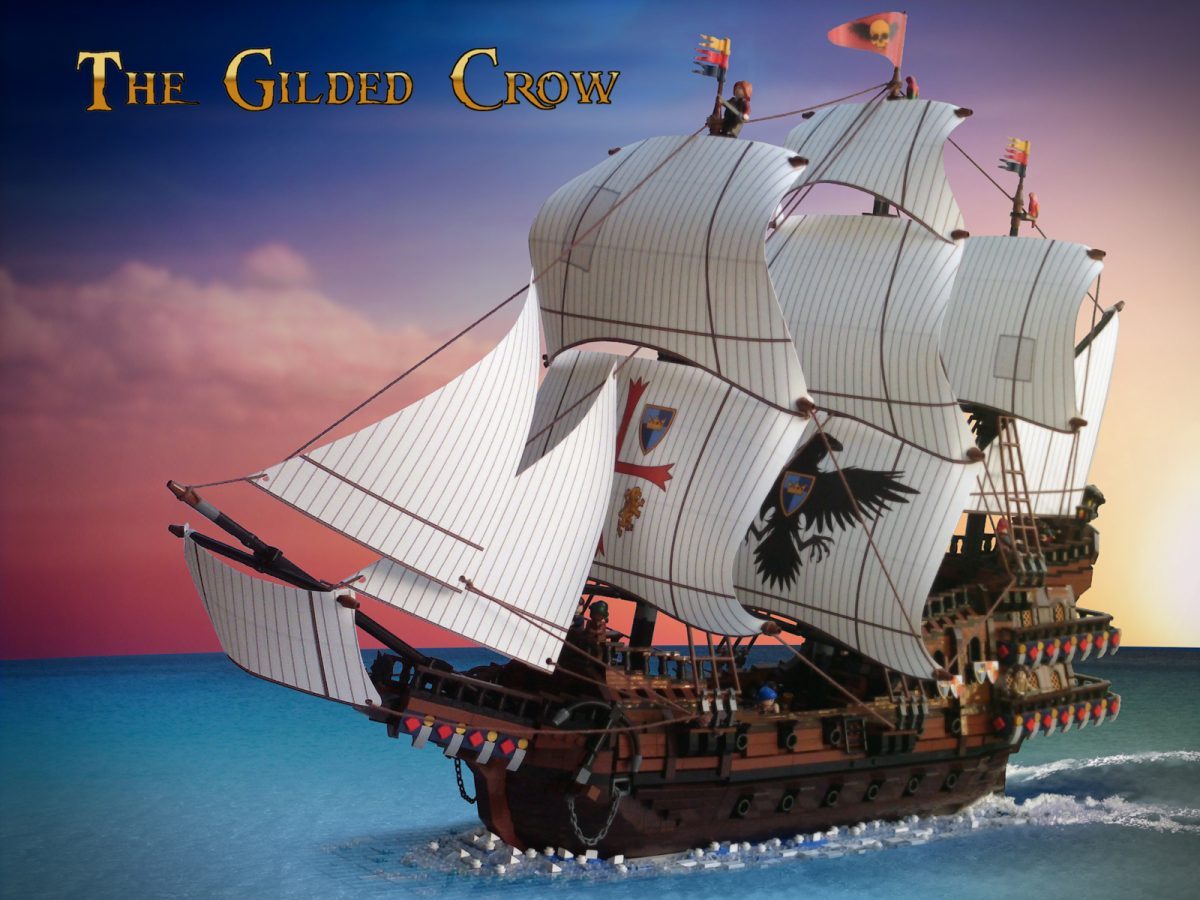 Eurobricks member Ummester has brought us this lovely MOC, the “Gilded Crow“! This lovely lady comes complete with all the fixings, including custom rigging and sails, a fully-armed gun deck, and a clever use of Chima parts for the figurehead. Well done, Ummester! 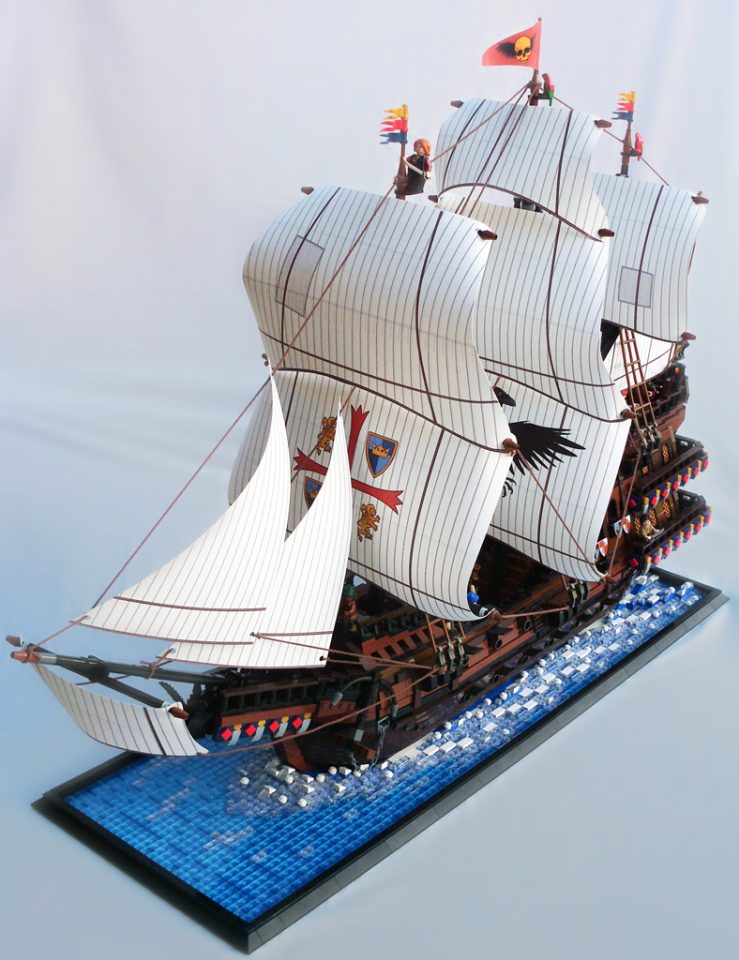 Looking down upon those beautifully crafted sails – some work has gone into making those! 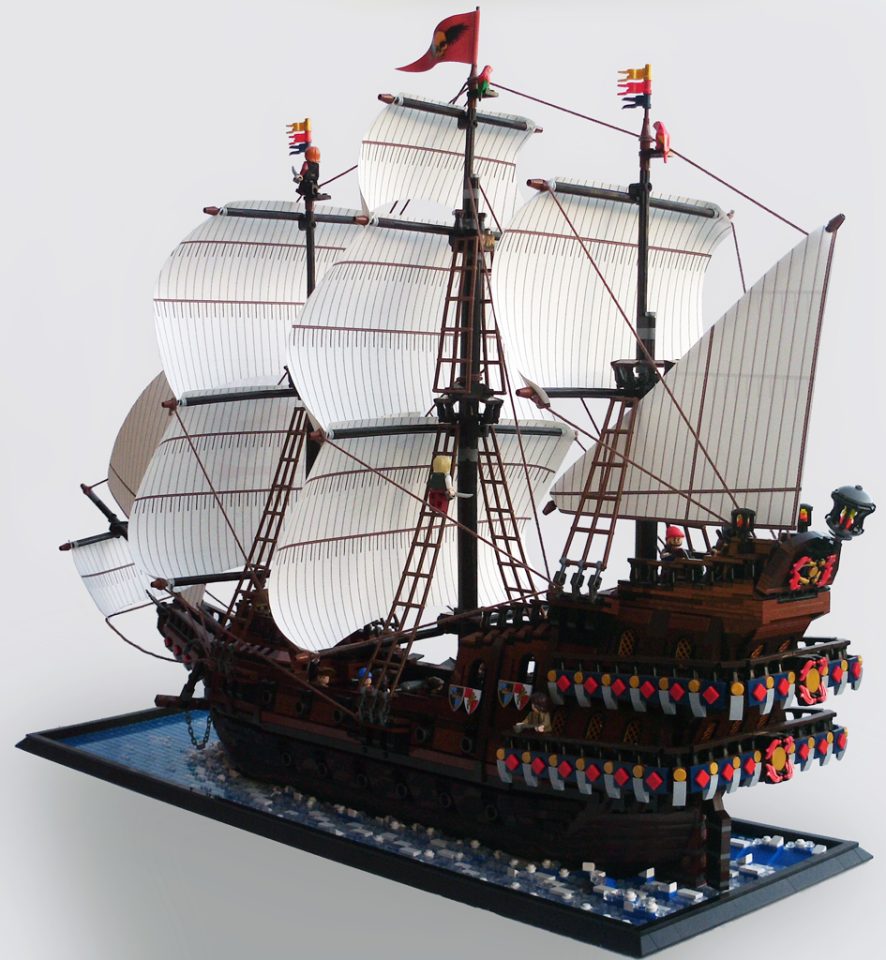 Ahoy! She is finally complete and here are a whole bunch of photos. She appears in most photos as I have her on display – turning to port under full sail, flying her red flag of attack, with guns ready for a full broadside. 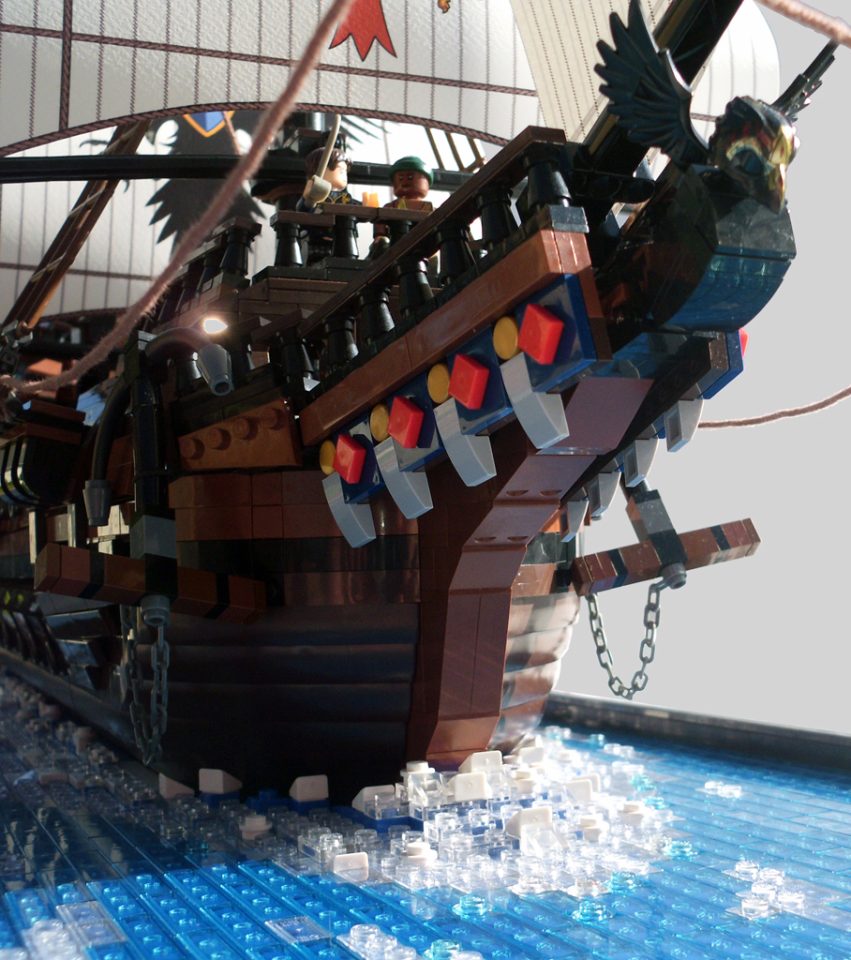 The figurehead – where the Gilded Crow gets her name 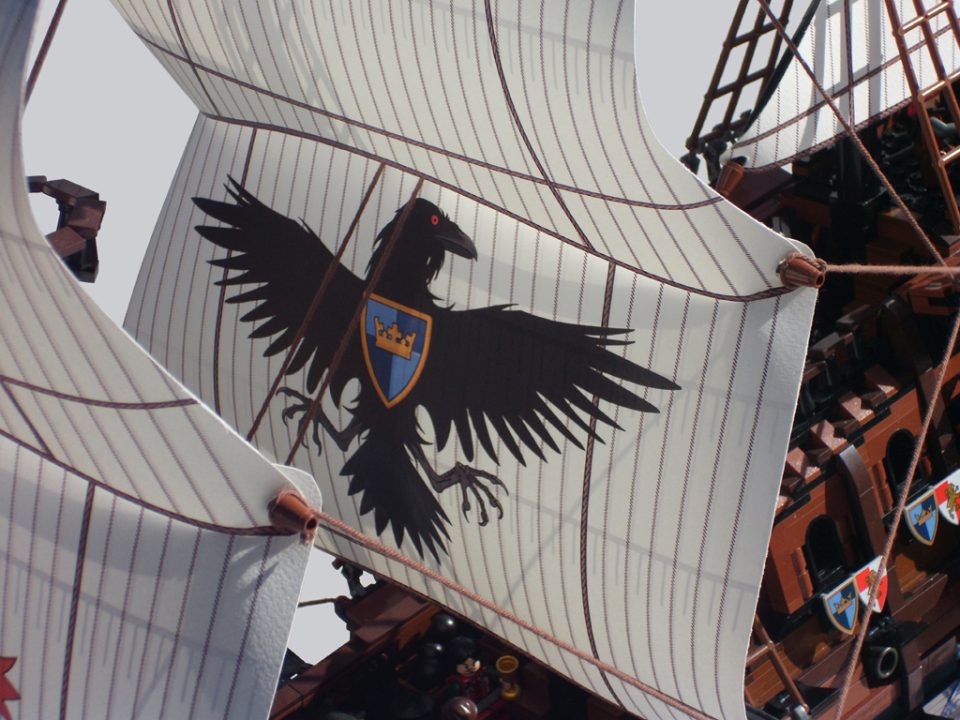 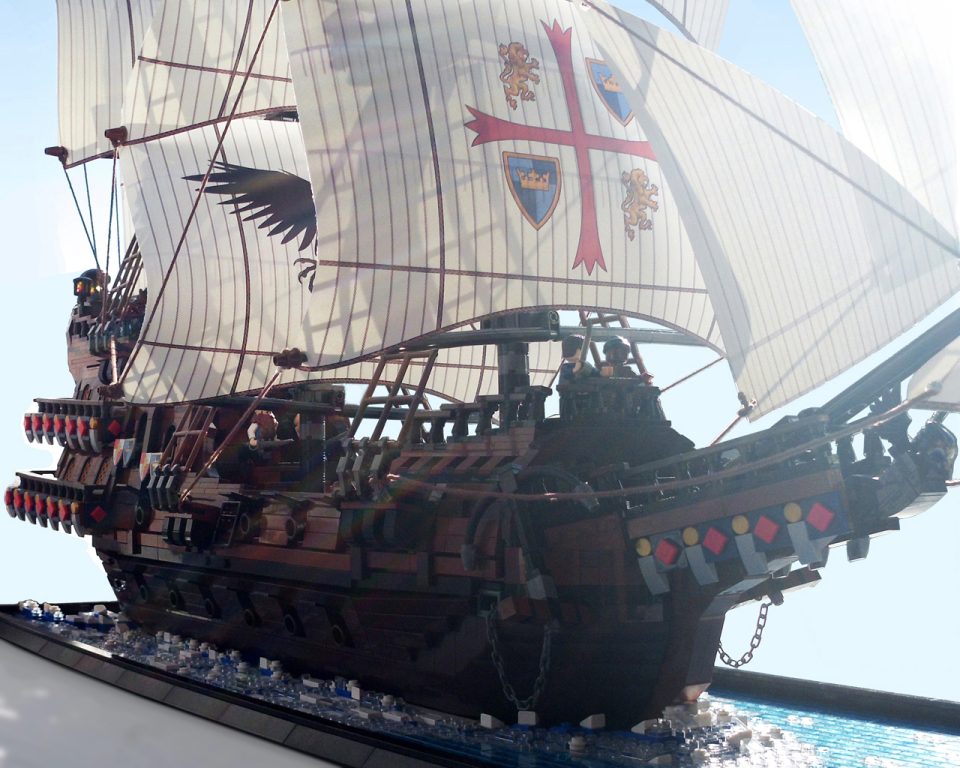 Sun shining through the sails 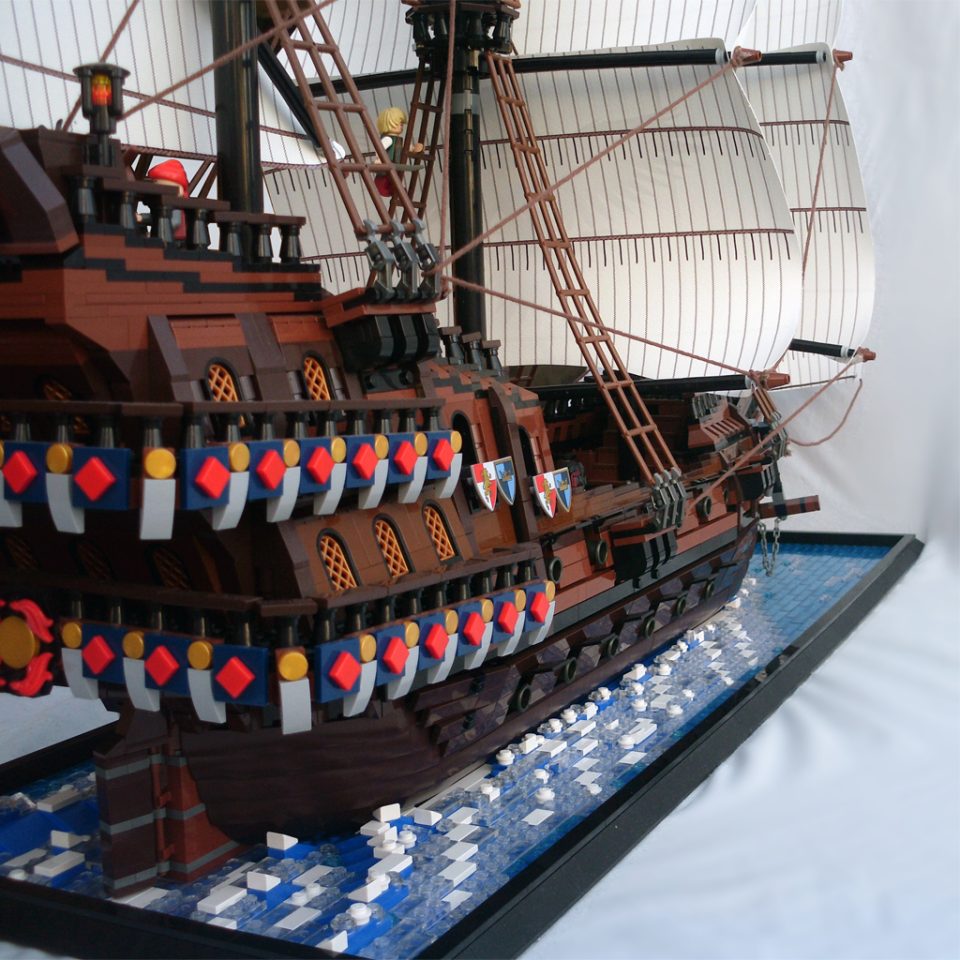 Imagine watching that stern as it sailed past 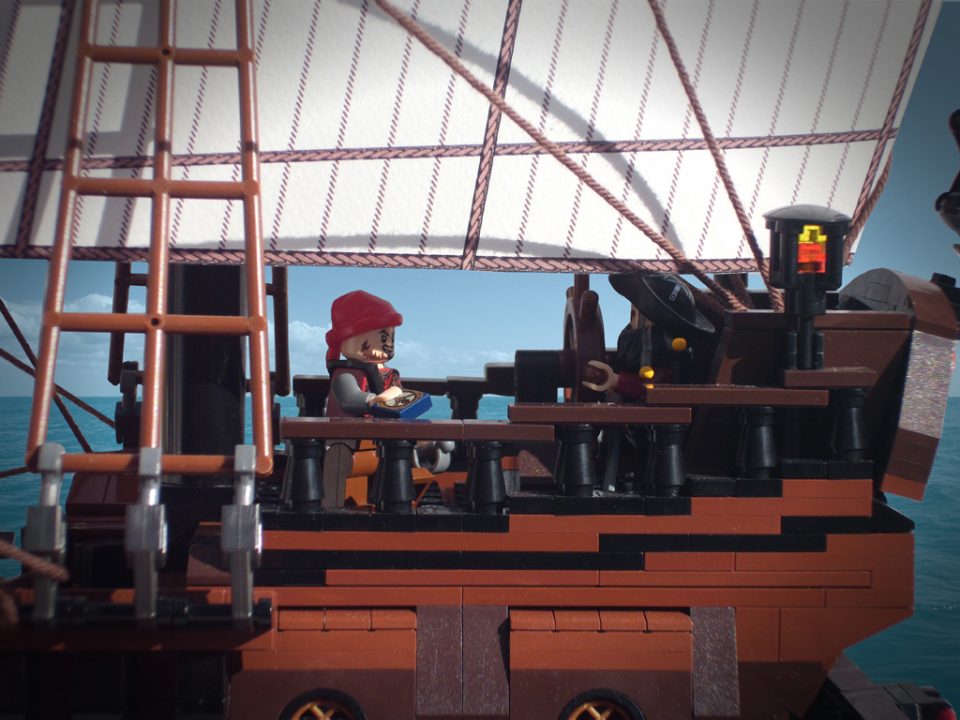 The navigator advises the helmsman – the Gilded Crow is on course! HURRAH! 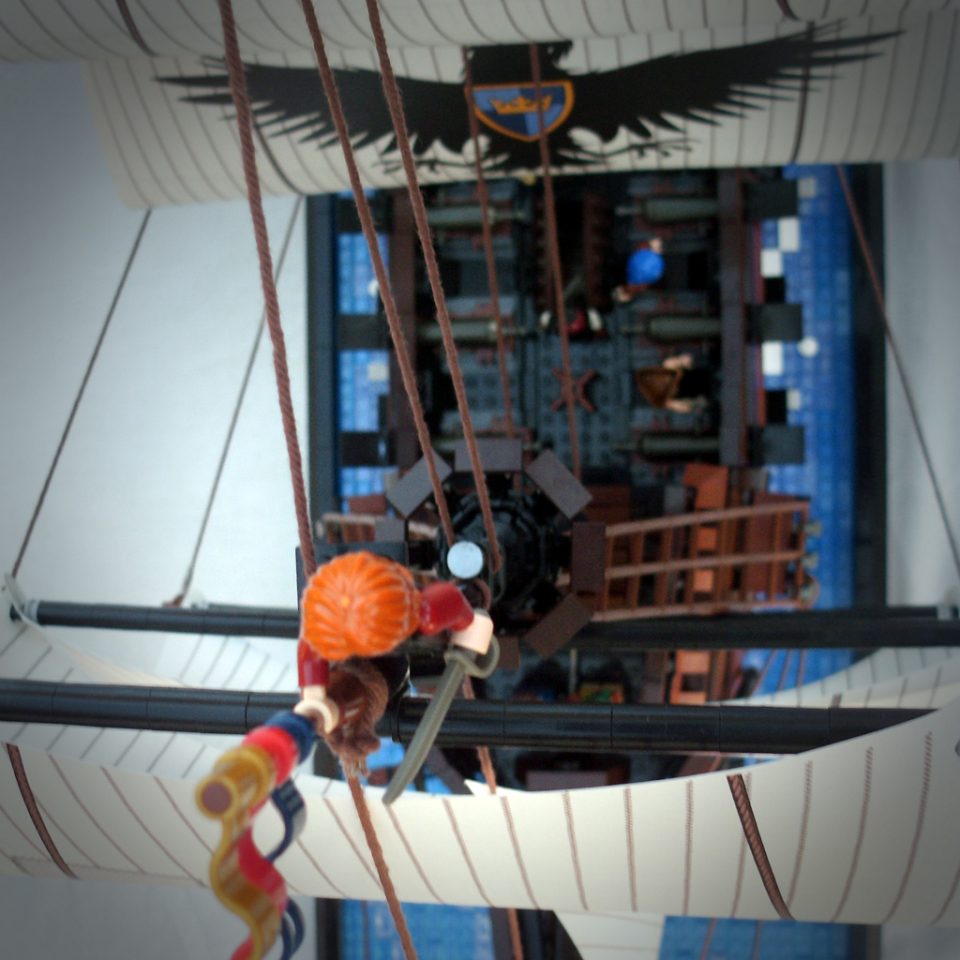 It’s a long way down! Imagine climbing up there in a squall. 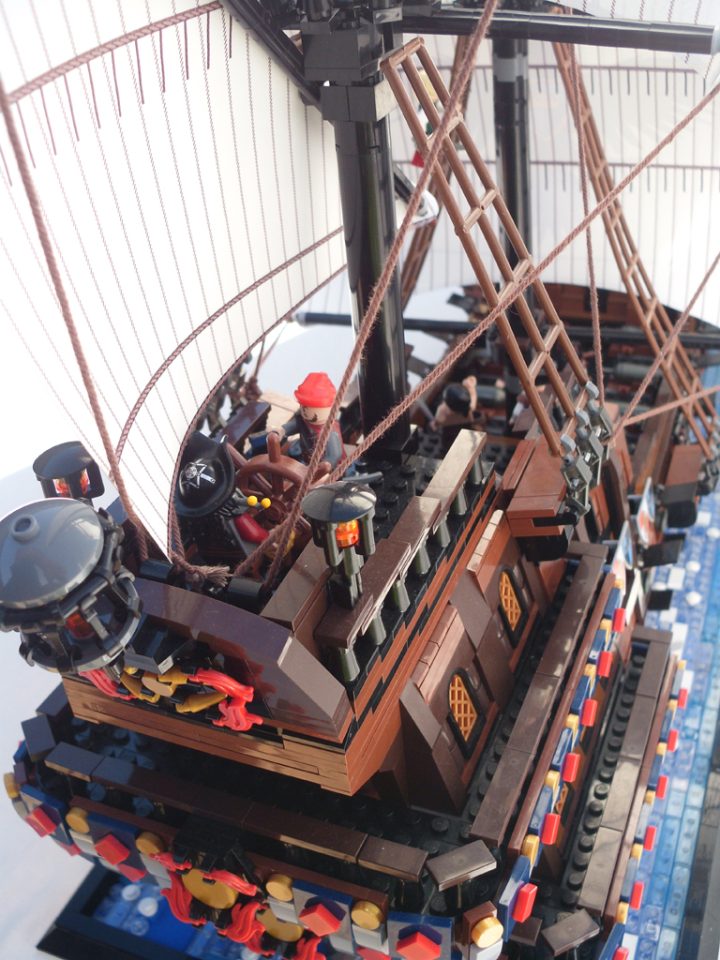 Looking down on the Quarter Deck 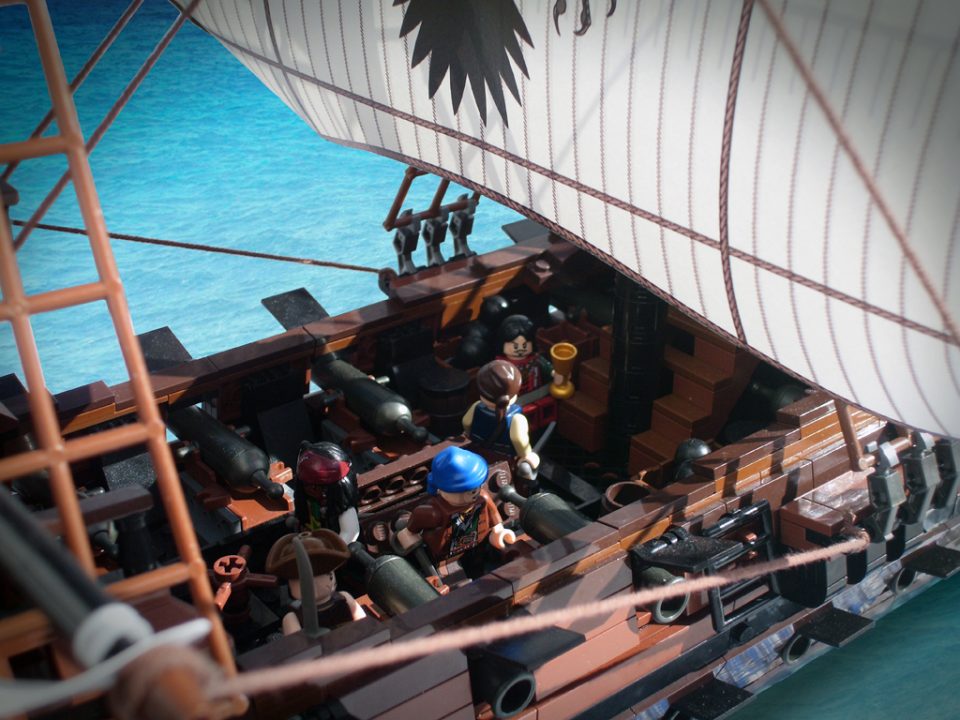 The deck is loaded with features… and cannons 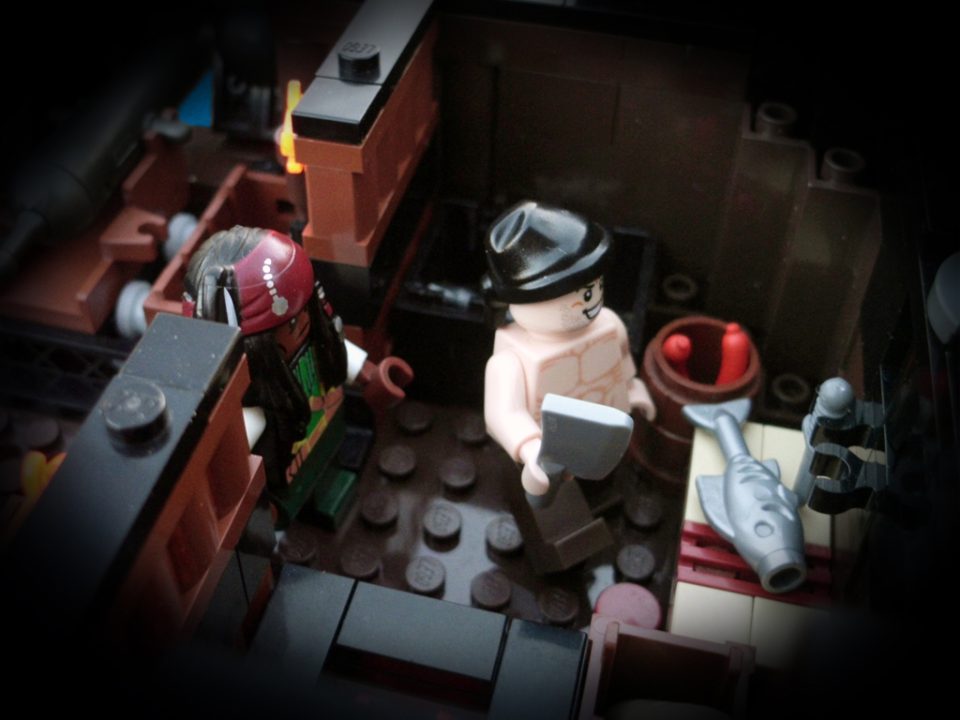 Meanwhile in the galley fish and Vienna stew is being prepared

What do you do with a drunken sailor? 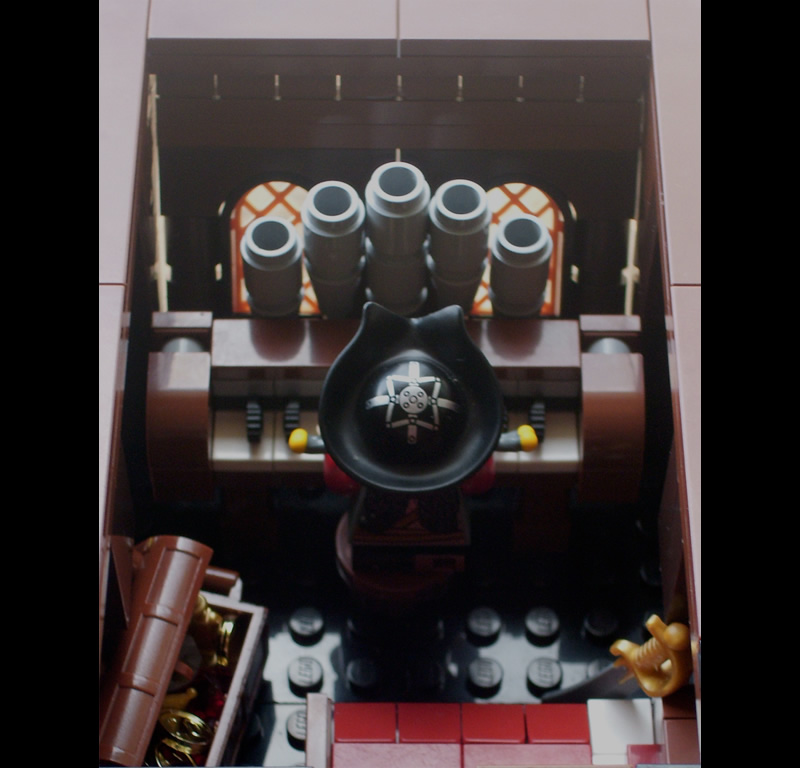 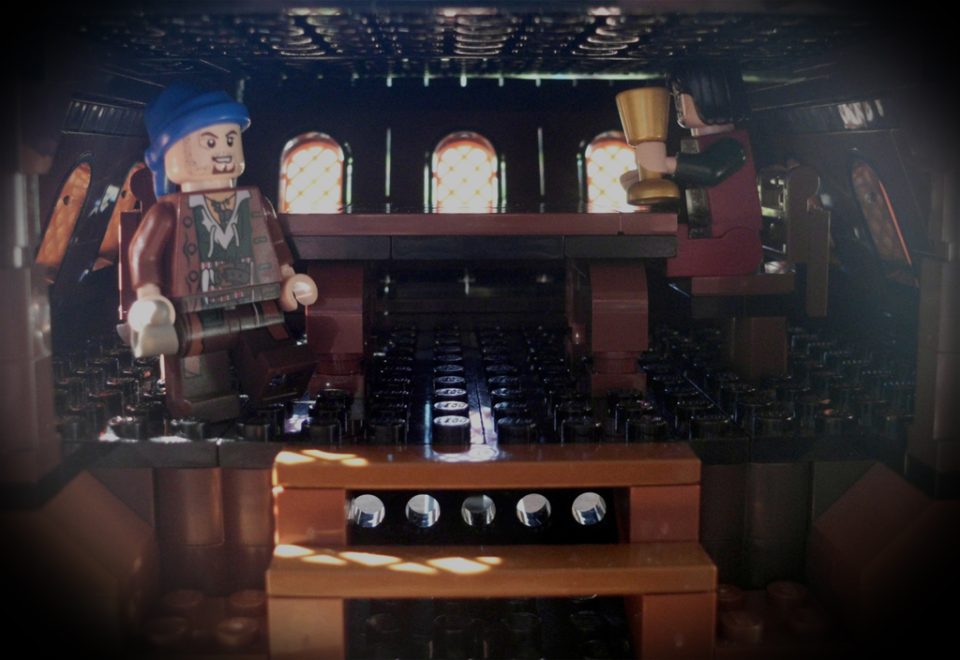 Just the usual skullduggery taking place inside the Captain’s Cabin 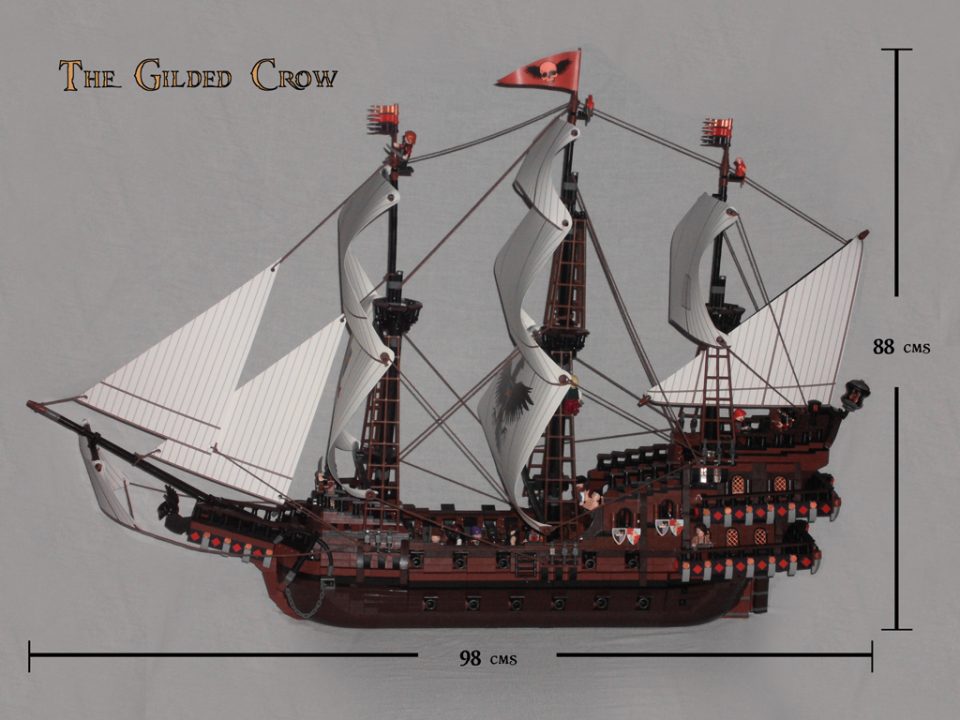 The Gilded Crow is a 22 gun galleon, based on historical ship design, though ultimately of my own invention. She is true 1:40 (or approximate minifg) scale, giving her real life dimensions of:

Other than the sails and rigging, the model is entirely LEGO and comprises of some 4500 bricks and 14 mini figures. The inspiration for the build came from a desire to have a LEGO galleon that looked as good on display as a model galleon, whilst rivalling the largest official sets in size and piece count.

Though designed as a collector’s model, the Crow is also a ‘playable’ build and features 22 shooting guns! She also has a modular design that allows separation of the decks and access to the minifig play areas.

The Captain’s cabin has an organ, treasure chest and bed.

The dining cabin has table and chairs.

The crew quarters has crew bunks.

The main gun deck has space for 14 wheeled cannons.

The galley has a fireplace, bench, utensils and foodstuffs.

And the brig has a rat!

There is also a large amidships (with cannons and an opening below decks hatch), as well as a removable quarter deck for access to the cannons underneath.

I hope you enjoy the photos of this build and would like an official LEGO set of an accurate galleon model, so that the Crow may have fair winds and following seas in the ocean of LEGO ideas.

Here be the crew of the Gilded Crow

The submission expired with a measly 728 supporters but you can still view the Gilded Crow on LEGO Ideas if you’re interested to see the comments and updates.

Ummester (Shane Robinson) shared a couple of ship MOCs in the LEGO Pirates Forum between 2014 and 2017. Beyond that we cannot tell you what happened to him, although, he does own a Flickr account which hasn’t been updated since that period.

He also has a LEGO Ideas Profile (obviously) which includes a couple of non-pirate submissions, but if you like Classic Space or Mechs, they’re worth a look.

Once you’ve done that, sail by the Pirate MOC Subfourm and lament with the Classic Pirates about how the magnificent Gilded Crow failed to garner less one thousand supporters. 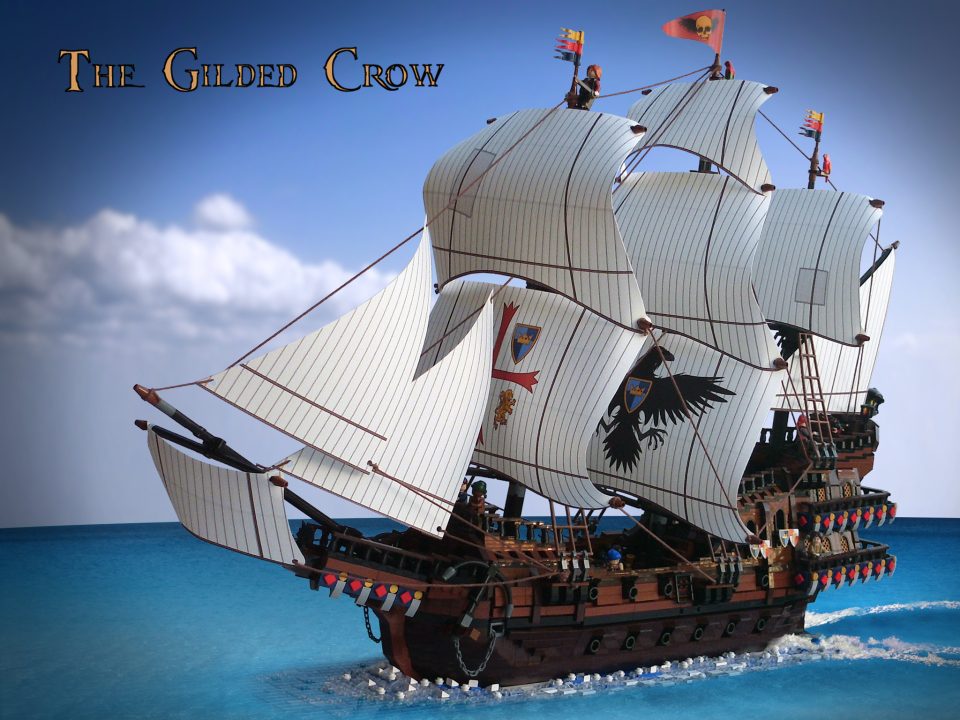 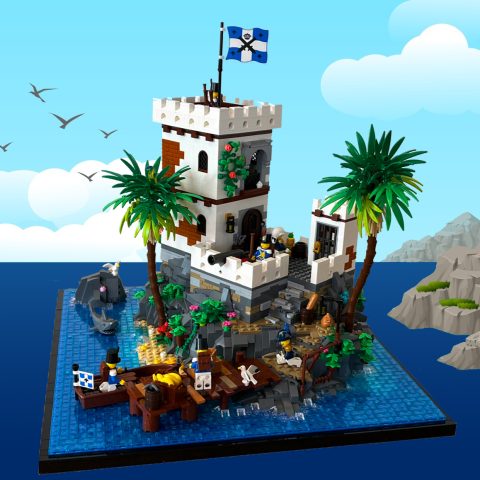